I Walked in the Room and Held My Boombox High, and What Happened Next Will Blow Your Mind. 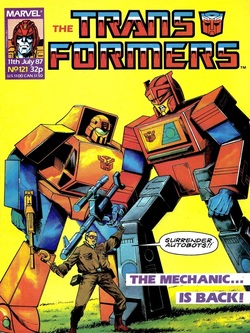 We're back to the American stories and after a long run of British material (one that felt much longer than it actually was), it's easy to forget that it has only been two Uncle Bob stories since the Mechanic last appeared. To put that in context, this issue also features the first substantial showing for Blaster from Budiansky since the Cybertron story arc over a year ago.

So, the minor human threat from a fairly weak story is deemed worthy of a faster follow up than one of the titular characters who had proved to be something of a hit. Is this because Bob has seen some unfulfilled potential in the fat overalls wearing idiot that justified a second showing and which will now pay dividends? Or is it just another sign of an author who is bored and ready to move on but can't as he's trapped by his own success?

The Mechanic side of the plot is about as interesting as you'd expect. He's using the equipment he's stolen from Ratchet to do what, by the standards of human crime, are high scale robberies (walking off with an entire radar dish in his hands) but which compared to what we normally get in even just the American book- the last story had a giant robot dinosaur out to destroy a four million year old spaceship- seems far to pedestrian and uninteresting.

Of course, for British readers coming off the back of a story involving a threat to the entire West Coast and impending Godhood, it feels even more like something not worth the time of our characters. As with Joey Slick, you get the feeling Bob would much rather be writing an issue of a normal Marvel book where he could create a new super villain of a scale to threaten someone like Daredevil, but can no longer think in terms of appropriate adversaries for giant warrior alien robots.

Which is a shame as the book already has such adversaries, they're called Decepticons. 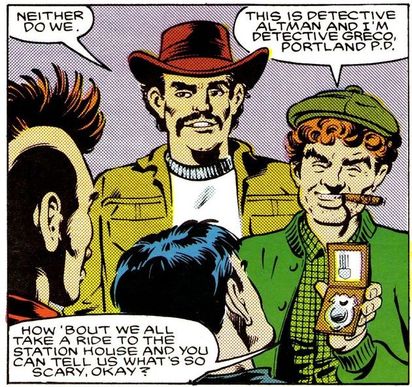 He's even dressed like a leprechaun, To be sure.
Still, the Portland police are worried about the Mechanic, and Irishcop O'Cliche is put on the case. After a very odd scene where he and his boss talk about the giant robots as if they're an unconfirmed rumour rather than a very real threat that has been terrorising the city for nearly three years. No wonder they seem to be having trouble locating the Mechanic's new base despite him still doing auto repairs and not being subtle in using the power booster rod to chuck the (first disassembled by his new machinery in foreshadowing for next week) car of a dissatisfied gangster out across a huge distance into the river. Which is something you'd think would stand out a lot.

On the Transformers side of the plot we're into the mad reign of Grimlock. Yes, the lesson he learnt at the end of King of the Hill! has been completely forgotten already and he’s now bully boy King Grimlock who shouts at his troops, spends time admiring himself in the mirror whilst trying on crowns and is unduly keen to kill humans if they annoy him.

Effectively any pretence the American series had of being serious is thrown out the window fully here. With very few exceptions, the rest of Uncle Bob's run is going to be a light comedy with the Autobot and Decepticon leaders played for laughs and even more examples of humans having wacky culture clash misadventures.

The main exceptions, other than the Underbase stories, are anything heavily involving the Head and Targetmasters, who will mostly be played straight, possibly because, as newer toys, their behaviour was under closer scrutiny from Hasbro. Though as he'll cheerfully be throwing the Pretenders into film sets and King Kong spoofs it's just as likely he just wasn't interested enough in the Nebulan bonded characters to bother putting them through some of his more usual romps. 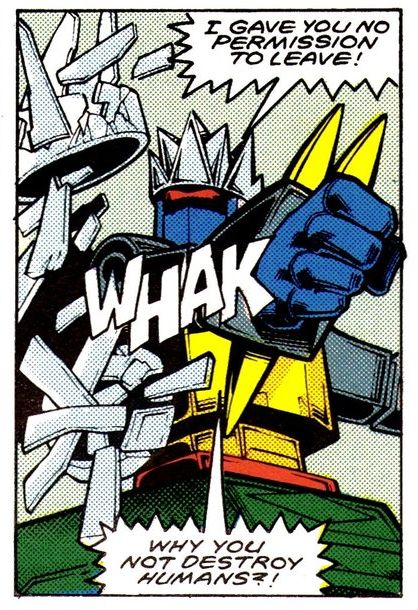 That was my favourite crown!
At this point it actually works if you've a forgiving sense of humour. There's no subtlety here- Grimlock asks Goldbug which of his crowns looks best and then crushes the one he chooses in a fit of anger- but it's nice silly entertainment and might have made for a nice two part story. Unfortunately, we've got another year of this as Budiansky clearly feels only important storylines like the Mechanic need to be followed up on and paid off quickly.

Of course, part of the problem is going to be Budiansky having to balance out his Grimlock plot with the introduction of the next set of actual leader toys (who, unlike those from the film, he can't ignore), but frankly he'd have been better off wrapping the Autobot rebellion and Ratbat stories up sooner and making Fortress Maximus and Scorponok the undisputed leaders. He might have enjoyed it less but it would have avoided the stop start storytelling we'll be getting as he tries to balance the story he wants to tell with the one Hasbro requires he tells.

I think there's also a problem in that we're probably not supposed to empathise with Grimlock as much as we wind up doing. He's clearly meant to be a boo hiss panto villain with us cheering on Blaster as he turns against his leader. But Grimlock's points are entirely valid, the equipment stolen by the mechanic should be retrieved and Blaster and Goldbug are inept at what should have been a nice straightforward mission of staking out his old base. The way they get scared off by a couple of kids trying to break into Goldbug in order to steal Blaster is both deeply embarrassing and well deserving of a full bollocking from the Dinobot.

Blaster himself is in an odd place this issue, there's a tokenistic nod to his tech spec personality as he listens to some rock and roll, but this is otherwise still the sombre and serious character from the Cybertron storyline. However, this isn't as heavily played as it was before and will be again. He's not entirely against the idea of killing humans and is already being a tad short with Goldbug, but doesn't go on about his Dead Best Friend, nor is he the domineering bully he'll become. Budiansky is clearly working out how to fit this fairly dark character into the light and breezy current nature of the book, and it's something he's going to continue to struggle with.

The issue ends with both plots meeting as the two Autobots continue their bad day as they try to take the Mechanic just as he walks into a police trap (with no mention of his police phobia. But then, why would Bob expect people to remember a detail from a whole two issues ago?) and Irishcop O'Cliche is forced to have his troops attack the robots.

This is pretty much a middling issue, with the Grimlock stuff being entertaining enough whilst the human side of things just drags everything down. Perlin does OK on art, but bizarrely draws Goldbug as Bumblebee with a different head. It actually looks for all the world as if the issue was originally drawn with Bumblebee in it and he had to go back and try and change the art after they realised this would be after the G.I. Joe crossover. It's likely more a case of him not getting a character model in time and is having to guess (though in both panels where he's seen from behind it's clearly Bumblebee's unaltered head), but the final result is still odd. 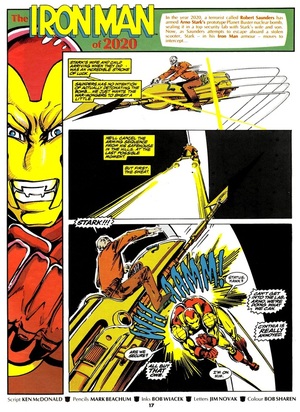 Iron Man 2020 recap boarder.
Transformation again pimps out the Annual, and also, in advance of the forthcoming crossover, Action Force, as the book attempts to get us all excited about next week having an extra four pages so as to give us a special Forcies story.

Grimlock still seems out of sorts as if Furman is still on holiday, the most telling sign of an inexperienced hand on the page is his claim there are Junkion toys out in America. He does however attempt to cover some of the temporal shenanigans in the previous stories by suggesting to reader John O'Hare from Windsor that anything could happen to Goldbug in the next twenty years to turn him back to Bumblebee whilst basically sidestepping some confusion over the two Ultra Magnuses. If this is Furman that means my confidence he was being very clever with all that stuff might have been misplaced.

There's a rather wonderful Robo-Capers this week where, years before he did a more elaborate spoof of the series in Combat Colin, Lew Stringer sends up the ending of The Prisoner episode The General as a computer is fed the ultimate questions and does a massive burp rather than providing an answer (or exploding as in the show).

Iron Man of 2020 inadvertently kills the terrorist who has primed the bomb locked in with his family, and only his eye retina can disarm it. Luckily Stark has both a time machine and a firm location for a child version of the villain 33 years in the past thanks to a Daily Bugle report of a run in with Spider-Man.

Back "Today" (would Spider-Man being in black costume give away this is from 1986 rather than '87?) we finally get the actual star of the comic this was taken from as Spidey takes down the Blizzard and some low level goons.

From a technical viewpoint, this is the first issue where the American credits have been removed and replaced by new ones done in the same style as the current UK ones, beneath the art on the title page and with each name separated by an Autobrand. The coverbox has also finally gotten some new artwork to replace the now gone Optimus and Megatron, with the ironic choice of what looks like a Rodimus from the Dan Reed issue that caused the book so much trouble two weeks ago (it even looks to me as if it’s the infamous Decepticon logo Prime!).

Next week, it's the final downfall of the greatest human foe the Transformers have ever faced. 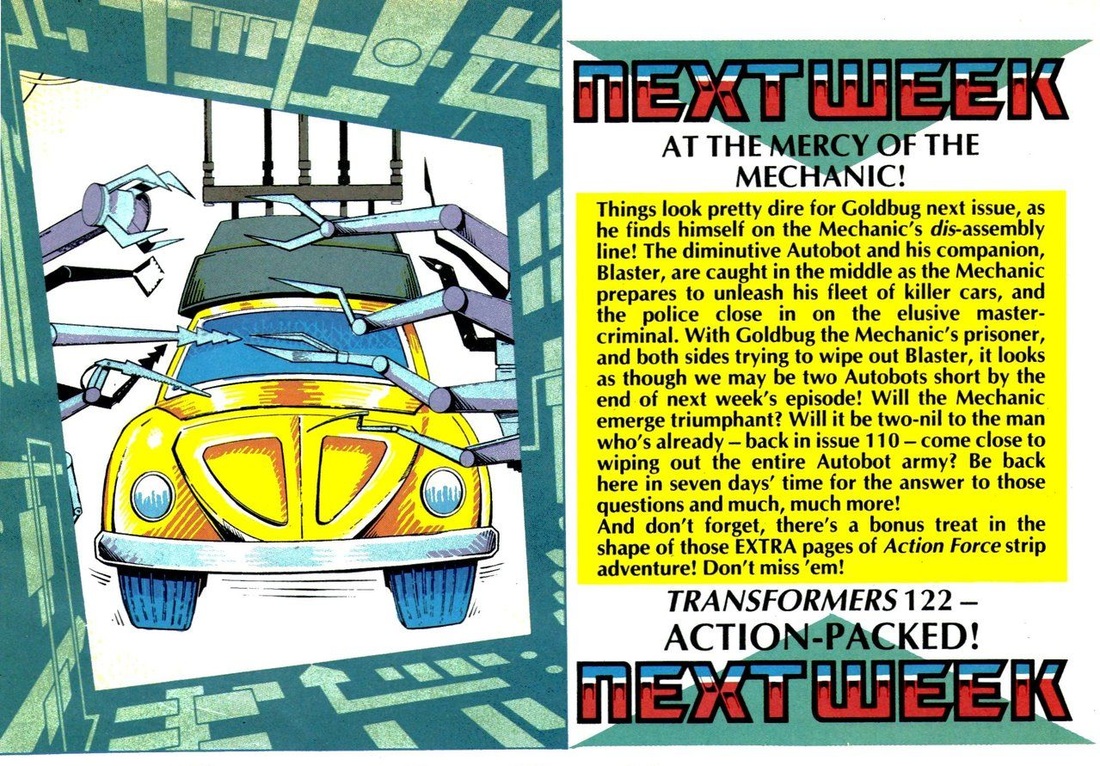