I Touch the Fire and it Freezes Me. 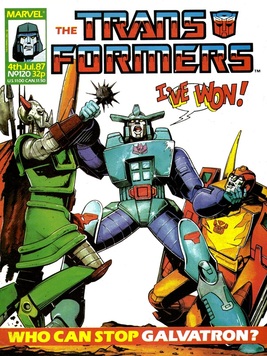 
That's an interesting trick, bounty hunter, I wonder if it works as well with your left arm!


Geoff Senior makes everything better. This is scientific fact, and you would be hard pressed to find a better example of it than the sort of conclusion to this seemingly endless story of Galvatron and the Volcano.

In terms of basic content, it's very much in a similar plodding vein to what we've had for the last six weeks. Rodimus and Galvatron have a fight (again), which is interrupted by Death's Head (again) before Wreck-Gar does his magic with the time trigger device sending everyone back to 2008... Except for Galvatron who looms ominously over Goldbug.

The repetition would continue to be a problem if not for Senior's work, which is on such a different level to even the best art we've seen from his contemporaries it's out of sight. This isn't to be dismissive of Furman's writing, more to say that the two are now in such perfect sympathy as a creative team their work together is flowing in a natural and organic way into pure awesome.

You can also tell that Senior is being given more leave to experiment and have fun than is perhaps the case with the other artists on the book. Virtually every page is in a "Classic" six panel lay out that feels very influenced by the then still ongoing Watchmen (and makes you wonder why Senior didn't go on to enjoy similar success to Dave Gibbons), and little things like the Western style shots of Galvatron and Rodimus with their fingers on the triggers of their guns are exactly the sort of details that only Senior would bring to the table.

I would not be in the least surprised if Furman had enough faith in his partner here to forgo his usual more detailed scripting for the fight scenes and just wrote "Have fun Geoff" on a post it note, tellingly the dialogue is much more sparse than usual during the fights, with the visuals and sound effects being used to convey virtually all of the action. 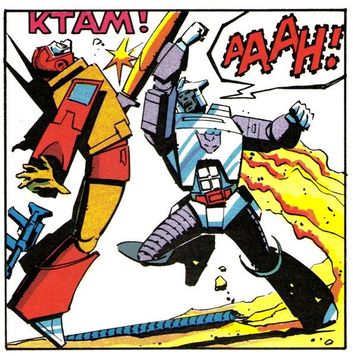 Online fandom summed up in one panel.
Death's Head also remains good value as we finally get the fight between him and Galvatron we've been heading towards, with Rodimus finding this story really wasn't about him the hard way as he gets his face pummelled into the ground fairly easily. As he wasn't intended to be such a big part of proceedings when this was plotted out it's by necessity a short combat, but as with Magnus' last stand brevity is the soul of arse kicking and every thump, kick and quip is perfectly judged. It's also nice that Furman keeps his excitement over his new creation in check and doesn't just have him be the best thing ever; Galvatron is on the point of winning when everyone gets sucked off back to the future and the panel of him ripping off the robot's arm is glorious.

Even with writer and artist working so well together, the flaws in the build up to this final mean its foundations are made of quicksand. On the most basic level, the action scenes would have been more exciting if we weren't coming off the back of five weeks of characters thumping Galvatron and running up and down the volcano. There's a really good four part story struggling to get out of here (one perhaps that could have been followed up by a two parter dealing with Professor Morris before the début of new Centurion?), but the padding coupled with Shouty Mad Galvatron being less interesting than the calm plotting one bring the whole thing down.

There are also other problems. No reason is offered for why Goldbug- who unlike Magnus (though as he's been deliberately stalling over his holiday he could have probably reached his colleagues pretty quickly in a crisis) does know where the Ark is- doesn't go for reinforcements, or even just get on the radio for help. He and First Aid seemed to be out for a stroll so it really can't be far to Autobot headquarters and with the extra muscle Magnus need not have been sacrificed (SPOILER: He's going to turn out to be OK). There are ways this could have been hand waved, but the absence of even a token line is annoying.

Another oddity is that this is the one and only attempt Rodimus will make to deal with Galvatron until this storyline starts to wrap up in 80 issues time. Considering his guilt over the Decepticon being at large in the past and the fact there's already evidence history is being mucked about with this makes no sense. Why, when they arrive back in 2008 and realise Galvatron isn't with them, don't they just head straight back? Indeed, with a time machine Rodimus could take the time to regroup, get some extra troops in and still return to the same moment he left.

Again, this could be easily covered in a line or two (and he is going to be a busy boy. Mind, when he does eventually bother to time travel again it'll be whilst in the midst of dealing with a Soundwave plot to destroy the Earth so he's clearly not waiting for a quiet moment), but the comic will never bother and as such Rodimus is going to look grossly irresponsible for not trying to sort out his mess again until the Universe is on the brink of total destruction. 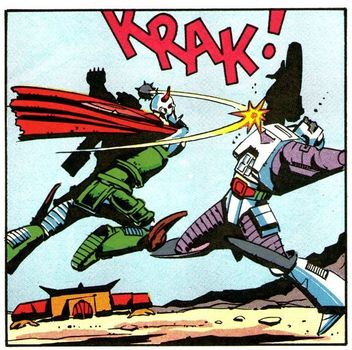 Senior is da man.
There's also the big elephant in the room of this not being the end, but a massive tease for the next Annual. In theory this isn't a bad idea in and of itself (though apparently the attempted arm twisting this created didn't go down to well with parents, it'll be interesting to see if the letters page reflects this), but it really needed to be a better, stronger story for it to work, not one that needed less pages rather than more.

This also creates problems for the  comic, the Annual won't be published until August (and as such could be anywhere between four and eight weeks away), and as such books are traditionally Christmas presents that means most kids won’t see the resolution for five months. This creates two, somewhat contradictory issues.

The first is that Ladies Night! will be published in October and therefore ruin the ending of the Annual story for that majority of readers who haven't managed to get hold of the hardback as soon as it was released. Of course, Goldbug being in the next issue fine and dandy also helps to kill of any suspense quite neatly; it's a rather odd situation for what is basically good old fashioned Saturday morning serial storytelling to be in.

On the other hand though, Furman is going to be very careful not to bring back Galvatron and Magnus until after Christmas so as not to make things too far out of synch for those waiting for Santa to bring the conclusion to them. Whilst this is laudable, this basically puts the Galvatron storyline on hold for six months. Obviously Furman wouldn't have been aware how rushed Time Wars! would wind up being, nor that the Magnus/Galvatron rivalry won't be getting a proper payoff, but in retrospect it's hard not to see this as wasted time that could have been better spent on setting up a more satisfying wrap up to the UK's biggest storyline.

Looking back over the volcano story, it's somewhat puzzling to try and work out what went wrong. Furman has made long stories work either side of this, and City of Fear! will later show he can make the "Series of linked two parters" thing work just fine. All the ingredients are in place for a great story but it doesn't come off, with only the two set up issues in 2008 (which are arguably the least relevant to the plot) maintaining a certain level of quality.

It's possible that, whilst having to set up the Action Force crossover and dealing with the forthcoming Headmasters promotion, coupled with adjusting to his new editorial duties, Furman simply took his eye off the ball with this story.

Honest... the American stories are going to get that bad.
Also, whilst it may have been commissioned by Ian Rimmer before he left, this is the first UK story to be published in its entirety under Furman's editorial reins. Generally, as we'll see when he takes over the American series, Furman tends to approach any new role with a degree of caution and baby steps. In a situation where he's still proving himself to the Marvel UK big wigs and dealing with concerns from the US offices about him editing his own writing (something that will be solved by Richard Starkings being given a tokenistic role as editor of the strip itself whilst Furman will use the middle names based pseudonym of Chris Francis whenever he has to be formally credited), he just decided to do as safe and unthreatening an epic as possible to help make for a smooth transition.

That makes sense (especially considering the unexpected Dan Reed issues throwing a spanner in the works), but makes for a rather bland story. Luckily, the rest of the UK material in 1987, even the stories Furman is less fond of, will work much better.

As you'd expect, a lot of the issue is given over to promoting the Annual, not only with Transformation but a special half page advert in the style of the Next Week box. The sidebar is also given over to promoting the next run of American stories, with the distinct lack of enthusiasm you'd expect at this point, with the idea of a car wash of doom being treated with an especially high level of incredulity. This bar is also the first place the words Headmasters and Targetmasters appear in the comic as the promise of cover to cover Transformers from issue 130 is repeated.

On the letters page, Grimlock seems oddly out of sorts, as if someone other than Furman is writing it and trying a bit too hard to be in character, coming over more like the Budiansky version we'll be getting next week with his belligerence and unhelpful answers to questions about things like where Xaaron is in 2008. If I recall correctly it was about this time last year we had a Soundwaves where the Decepticon felt as if he was being written by a fill in as well, I guess it was just holiday time for Furman again?

The Iron Man of 2020 (or rather 2015 as, thanks to Tim Roll-Pickering once again, I now know that this story was originally set five years earlier despite still calling him the Iron Man of 2020 and the UK team have edited the text accordingly) still doesn't meet Spider-Man but does get really pissed off when a terrorist takes his wife and son hostage as he tries to steal Stark's new bomb.

Next week it's back to Bob, and the return of the winner of the 1987 award for human supporting character I'd like to see come back less than Cindy (don't worry folks, when we get past the Mechanic things start picking up again and I'll be more cheerful). 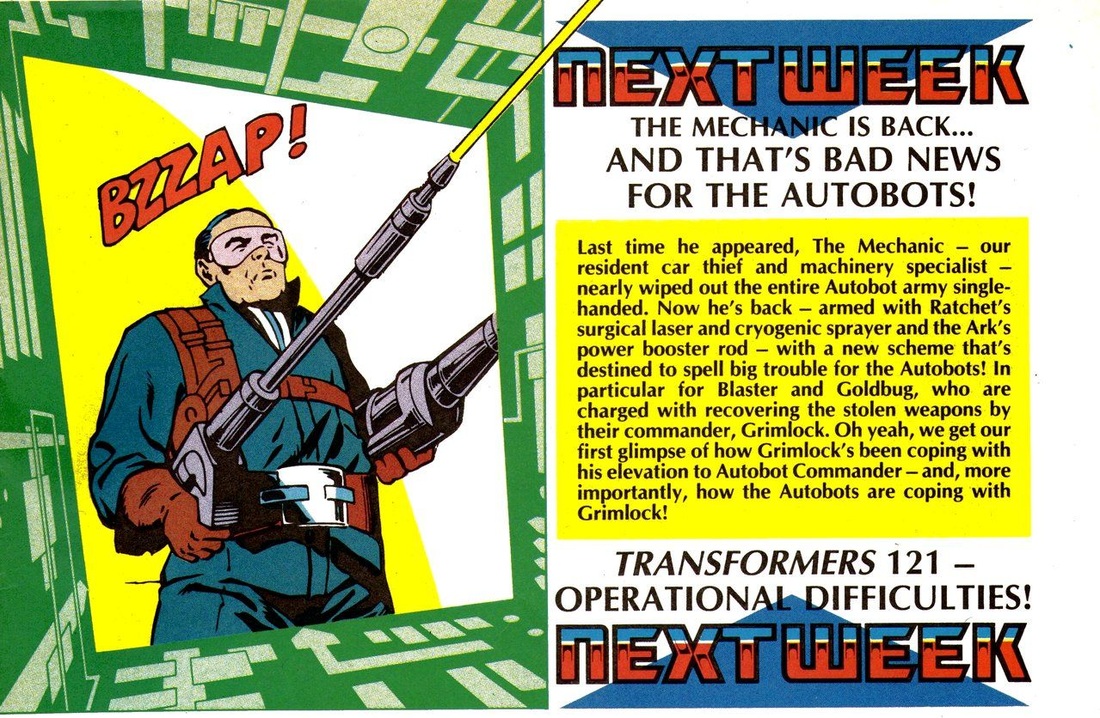