Goddess on the Mountain Top, Burning Like a Silver Flame. 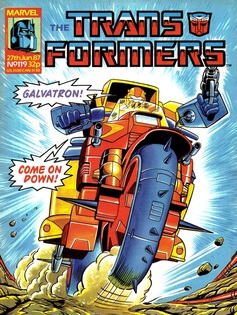 
This is no game show- this is deadly serious!


The first thing you'll notice when you open this issue is that the image on the Transformation page, which is usually a panel of art from the main story, is a Geoff Senior piece of Galvatron and Rodimus facing off that's actually from next week. As with the use of Jeff Anderson's Goldbug in last issue's next week box, this is a clue as to the massive behind the scenes problems this issue faced.

I talked a few weeks ago about Dan Reed's tendency to leave sending his art over from France till the last possible second so as to ensure that there'd be no time for editorial changes. It's here, on only his second assignment for the comic that this policy goes badly tits up, meaning we came very, very close to a complete disaster.

It seems the French postal service lost Reed's already right on deadline art, leaving editor Furman faced with the risk of having to put a comic out with nothing in it. In the fourth Classics UK book he talks about how they very nearly had to do a reprint, something that would have reflected badly upon the book's new boss.

With respect to Furman's memory, I have to wonder how likely it is they would have rerun an old story when we're only two weeks from the next American reprint, surely just bringing Mechanical Difficulties! forward and then running the conclusion of the volcano story afterwards would, if still not ideal, have made more sense? Unless, rather than being sent the American material as it became available, the UK just got sent a big parcel with all of the next run of reprints in it in one go and it hadn't yet arrived? 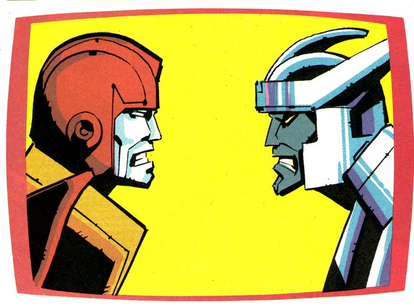 The Senior art on Transformation.
Assuming a reprint, it's actually interesting to wonder what Furman would have gone with. It's unlikely he'd have wanted more than one issue of old material, but that basically just leaves the Christmas stories, which would have been a strange choice for July. There are a couple of mostly standalone two parters that could have been pressed into service if the team had been prepared to risk a fortnight of reprints (presumably just doing one part of a story would never have been an option as that'd be even more off putting for readers), but they'd all seen the light of day fairly recently in the Collected Comics, making them of even less interest to kids who would have been hard pressed to take a comic with nothing but old rope in it to their hearts as it is.

My, purely speculative, guess would have been for one of the Annual stories to be called upon, with And There Shall Come... A Leader! and Victory! being the likely forerunners. Again, by no means a perfect solution, but it's hard to see what else could have been done if the worst had come to pass.

Luckily, though so down to the wire that the rest of the issue seems to have been put together without it- considering Transformation was clearly done before the art arrived I wonder if they did two versions, with one ready with the apology and whatever reused material was planned on the contents page? - Reed's art was available at the very last second, albeit with at least some (possibly all) hastily redrawn.

As well as a somewhat rough feel to a lot of the art the main clue to this in the final comic is the massive Decepticon emblem on Rodimus' chest on the opening splash page. In fairness to Reed he clearly didn't draw this perfectly realised Deceptibrand (his more idiosyncratic take on the logos- including the Autobrand with fangs- is evident in the later panels), it looks as if someone in the Marvel offices noticed Reed had left Prime's logo off and quickly slapped one on , with no one noticing the wrong one had been grabbed due to the deadline.

The real surprise of all this is Reed would continue to get work on the book after this rather graphic and near disastrous showing of the flaws in his working method. It's either another sign of Furman being more of a Reed fan then than he is in retrospect and willing to overlook one mistake no matter how large (being able to pin a large part of the blame on le post may have helped), or the book was so desperate for artists at this point there was little choice but to overlook the foibles of someone who was happy to work on the series.

Either way, I suspect for future assignments Furman was very careful to give Reed a deadline at least a full week in advance of when the art would actually be needed. 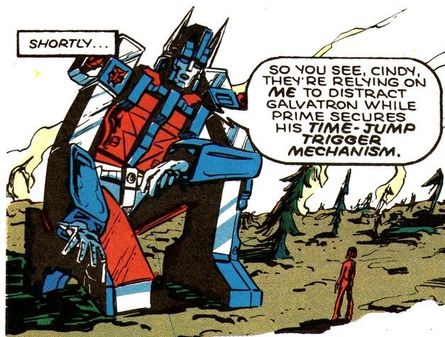 "But why would you do that after I said Galvatron is going to destroy what we're standing on?"
To be brutally honest, at this stage this story could have done with losing at least one issue. We open with Cindy (showing Reed is more interested in female buttock's than logos) explaining exactly what Galvatron is up to, but it's basically just a longer version of what Galvatron himself said two weeks ago. Despite some nice art of the imagined destruction of San Francisco, it's not nearly as interesting as having a bug eyed mad man deliver exposition in terms of impending godhood. Simply having Galvatron go into more details on his plan then could have removed this scene, and the character of Cindy, entirely.

The Autobots then have a council of war that, despite a nice moment of Rodimus telling Wreck-Gar to start taking the situation seriously rather than quoting B&Q adverts, results in exactly the same run up the side of the volcano plan as two weeks ago. This, despite the addition of Wreck Gar and Goldbug, goes nearly as well.

There is at least one new factor in play though, that Ultra Magnus will then take on Galvatron in a distraction fight whilst Wreck-Gar fiddles with his time jump device so as to send everyone back to 2007. This plan deeply upsets Cindy, who is convinced Magnus is going off to his death (oddly claiming Galvatron has beaten him in every fight, even though the only one she's been nearby for had Magnus come close to beating the Decepticon and he only lost because of worrying about the girl), and she's so angry at the thought he might die she runs off crying.

This is especially hypocritical of her considering the only reason Magnus is going off to die is because she did such a good job of persuading everyone that Galvatron was going to destroy most of the West Coast, after working out this devilish plot is she really expecting Magnus to just sit there and do nothing? It makes her come across as petulant and selfish and frankly the comic is better off for her running away, even though she will be back (perhaps surprisingly as she's fleeing into an area that hours before was covered in a massive forest fire).

Oh, and we never do find out what happened to her two friends. 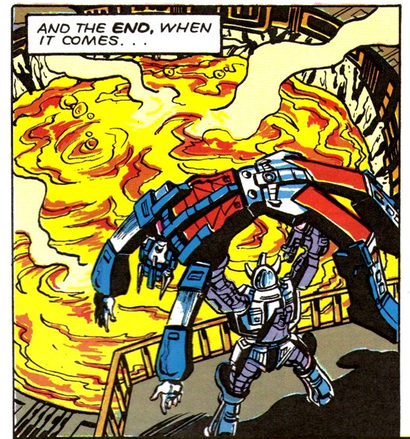 Magnus is so badly beat, he's gone wobbly.
The Galvatron/Magnus distraction fight is actually very nicely handled, Furman has clearly realised he's gone to this well once too often (and will again in the Annual), so it's short, brutal and no-nonsense, ending with Magnus' seeming death by being thrown into the heart of the volcano.

This means the issue ends on a high, but overall it's the weakest instalment yet of this overdrawn arc, with just about everything in it outside of that final fight being either redundant or, as in the case of Cindy, annoying. The obviously rushed art (anyone unaware of the behind the scenes problems would still note Reed's work isn't anywhere near as good as his first issue) doesn't help either, resulting in a bit of a mess.

And hey, Rodimus, how about, instead of just standing there watching Wreck-Gar work you go help Ultra Magnus instead? Whoops, too late.

The new Inhumanoids replacing backup story is a reprint of The Amazing Spider-Man Annual 20; though you wouldn't know it from either this first part, nor the sidebar of Transformation, both of which are entirely about the return of Arno Stark, the Iron Man of 2020, last seen in the Machine Man 2020 backup. That series, and in particular that character, had proven popular so it's little wonder this prominent guest starring role from the previous November was pressed into service as soon as the need to promote other Hasbro properties and the Marvel New Universe were out of the way.

The only real clue as to whom the actual star of the story is a hint from Grimlock on the letters page, but Arno is such a fantastic, fun, git of a character it doesn't matter. One moment he's blowing off his wife and small child, the next he's dancing around a top secret military demonstration on his suit's inbuilt roller skates. A mention of the time machine he's built sets up how Spider-Man will be getting involved, but otherwise the focus is on the new super bomb Arno has built.

The pimping of Iron Man 2020 on Transformation is also the first mention of the "Cover to cover Transformers action" we'll be getting from issue 130. After a four issue return for Inhumanoids.

On the letters page, Simon Griffith from Leyland is deeply excited by an appearance from Simon Furman on kids TV program Get Fresh, though Grimlock himself is annoyed that the stubbie managed to talk about the comic for three minutes without mentioning its real star once.

Philip Crowther-Green from Reading is back with the results of the reader survey for 1986. The main results are in no way surprising, best writer for Furman; artist for Senior and story for Target: 2006. Impressively though, Centurion ties with Galvatron for best new character, which is pretty staggering considering the sheer number of actual new Transformers that were introduced last year. Of course, this achievement is going to be recognised in six weeks by the comic chucking out everything readers liked about the poor bugger.

Regular contributor Tim Roll-Pickering made the excellent comment on last week’s entry about how generic most of the covers for this storyline are, with several being worryingly easy to stick on any part of the story with, at most, just the speech bubble changed. So it’s nice to have a cover here that directly references the contents. This makes it somewhat  ironic that it came so close to having a completely different comic inside.

Things are rounded off with an A-Z, on Breakdown and Bruticus, and a fun Robo-Capers that tries to show you how to draw a robot before the robot objects and breaks Stringer's fancy new pen. All in all, as rushed as the main comic may have been, the wrapping around it is as polished as ever.

Next week, it's the epic conclusion... Or is it? 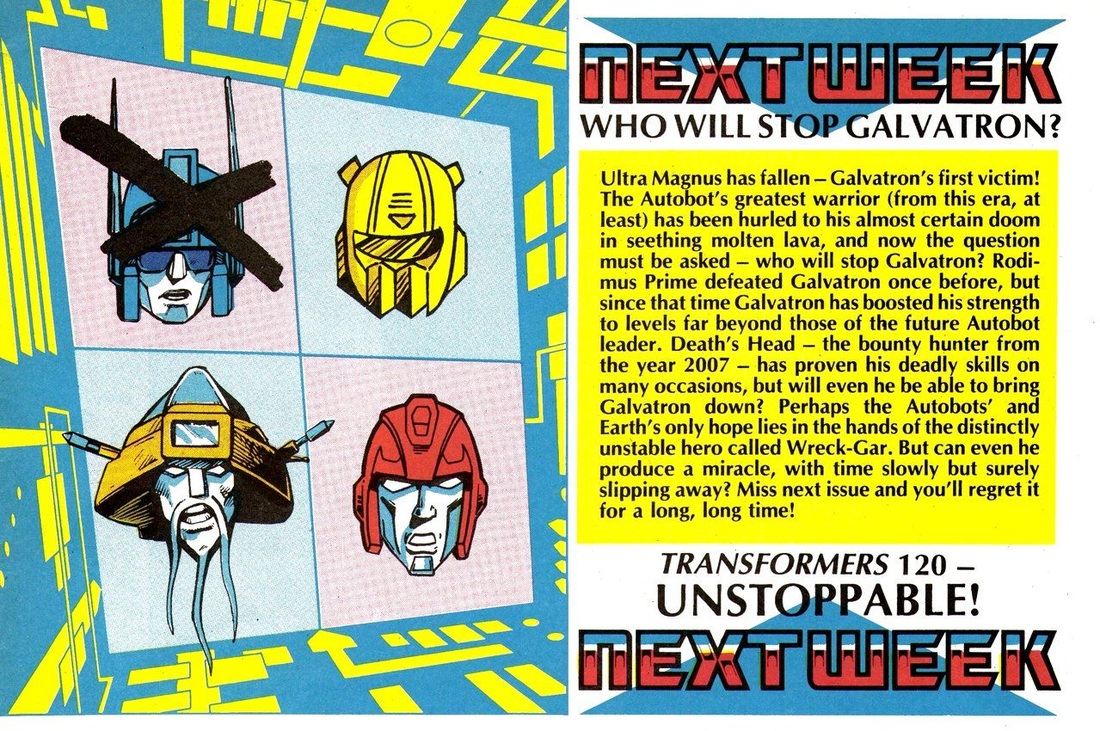