This was a Cautionary Tale: A Boombox is not a Toy. 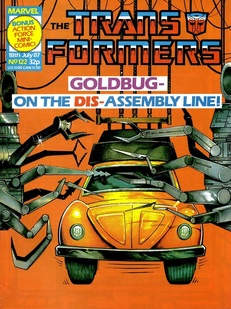 
Last week I mocked the small scale villainy of the Mechanic, but here at last we learn the full scale evil of his amazing scheme, a scheme that more than makes him a worthy adversary for the Transformers. Yes, it turns out he’s rebuilding gangsters’ cars into super-tanks so powerful it takes Blaster exactly 30 seconds to disable all of them with his electro-scrambler. Wow, I’m certainly eating humble pie here.

Despite the almost inconsequential nature of what they’re up against, Blaster and Goldbug continue their run of bad form, starting the issue by letting the Mechanic get the drop on them with a tree before having to run away from the police, with Goldbug suffering the indignity of a shot out tire. Let us not forget, Blaster is a hardened resistance fighter who has survived for millions of years fighting against an insurmountable foe. Yet here, a fat man in a boiler suit with a couple of medical tools completely pwns him.

Things continue to go badly for them as they track the Mechanic to his new base, but Goldbug (a spy lest we forget) completely fails to sneak up on the place without being seen on CCTV. For his troubles he gets pulled into the Mechanic’s garage and nearly pulled apart in a sequence that feels like it’s escaped from a cartoon episode. However, despite the silliness, this scene is actually the most fun part of the issue and at least has a, albeit token, sense of danger to it. 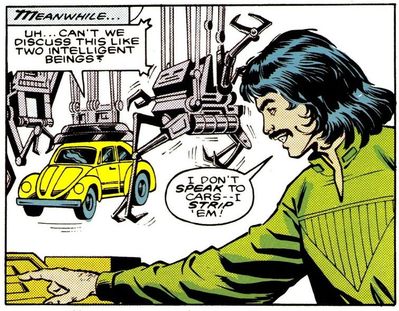 "Do you expect me to talk?
Blaster meanwhile teams up with Irishcop O’Cliche, because both are mavericks who don’t follow bad orders. Except that, whilst O’Cliche was specifically told to stop the robots Blaster wasn’t actually ordered to kill any humans who get in his way despite what he claims. In fact, the rest of the issue will see him try and follow Grimlock’s actual orders almost to the letter.

This team up results in the strangest scene yet in a Budiansky issue, as Irishcop just walks into the Mechanic’s secret base as he’s giving a demonstration to all the top crooks in the area (seemingly this cop is better at sneaking about than Goldbug) playing rock music loudly on Blaster’s boombox mode, whilst acting like a drunken idiot. Amazingly this distraction works, and the super cars are destroyed whilst the crooks are rounded up.

Equally amazingly, the Mechanic not only escapes but escapes with all the tools he’s stolen from Ratchet. Meaning he’s better at sneaking about than Goldbug. This is a staggering level of utter incompetence on the part of the two Autobots, so it’s no wonder that Goldbug becomes so embarrassed he turns Cliffjumper red for one panel. 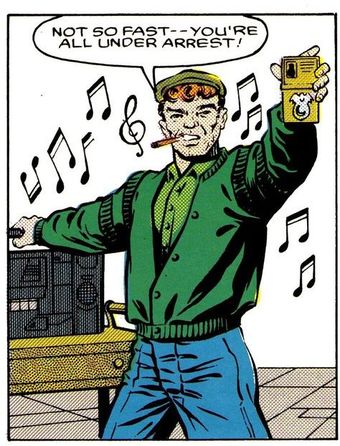 "Badges... we do actually need badges".
The issue ends with Blaster and Goldbug deciding they’ve had enough of Grimlock and his evil tyranny of being annoyed when they can’t follow through on his reasonable orders, so they head west away from the Ark, in what is presumably supposed to be an act of defiance but feels more like two sulky school kids skiving off school so as not to get told off for not doing their homework.

The impact is also lost because all we’ve ever seen Blaster do is decide his leader’s orders aren’t good enough before going his own way, he acted like this with Perceptor, probably the most reasonable Autobot imaginable. If you factor in that Goldbug has form for running away from the Ark in a sulk it’s hard to credit they’re carrying on like this now because Grimlock has legitimately gone too far this time.

All in all, this is a very poor story that goes nowhere, has little menace to it and annoyingly doesn’t wrap up the Mechanic plot but instead leaves him with a sequel hunting exit that will never come. When ReGeneration One was busy inventing new loose ends from the American series that it could wrap up (hello Scorponok!) why was this beauty ignored?

As you can tell from the flash in the corner box of the cover, the comic itself is hugely excited about the bonus Action Force comic that has been included at no extra charge, aren’t we lucky? As ever when mentioning AF, Transformation talks about its sister comic in what can only be described as a grudging manner (it feels like teeth are being pulled when it calls that title as “Marvel’s second greatest adventure comic”), and it’s very obvious this is being done solely at Hasbro’s request to prop up a floundering title. This also means that, for the second time in a month, the main image on Transformation is some Senior art that isn't actually from the main strip.

We also get the full details of Ancient Relics, with it now being confirmed as starting in issue 125. However, all the promotional effort is wasted as it gets the issue numbers for the Action Force part of the crossover wrong, claiming they’ll be in #124-127. If that was the case the wait for the resolution to that story would be even longer than the one for the end of the volcano plot. 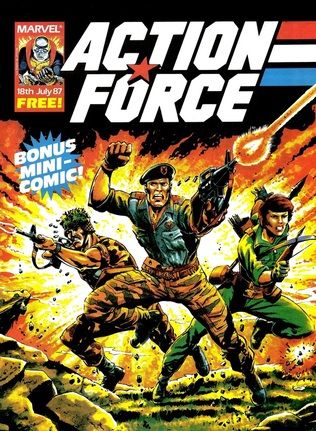 The faux Action Force cover.
The mini-comic, in an honour only previously bestowed on the first part of Spitfire and the Troubleshooters, gets its own separate cover, a reuse of that from the first Action Force issue. The contents however, are more recent than that, being a reprint of the British content of issue 18 of the main comic, something only two weeks old at the time this was published. That kind of kills the excitement of it, and feels as if the assumption was there wasn’t enough of a crossover between readers of the two books to prevent something that new being used. The fact this is a reprint isn’t mentioned anywhere in the issue itself, it seems they just genuinely thought no one would notice.

The story itself, Dummy Run!, has some lovely Geoff Senior art (and that may have been another factor in it being picked as that’s something Furman would know the Transformers fans would appreciate), but the five page format isn’t used nearly as well as it will be by later Earthforce strips, or indeed Ancient Relics as each issue of that has more going on in it than this adventure written by Steve White does. Flint and Lady J get attacked by some Cobra F.A.N.G’s whilst testing their new tank by Stonehenge (!)... And pretty much nothing else happens. You don’t even get much of a feeling of their characters for it to make a decent introduction to them. The only real highlight is Destro disguised as an ageing hippy for no real reason (for more Destro fun, watch THIS).

What arguably makes this choice of reprint a mistake however is that it has basically exactly the same "Action Force gets ambushed on a training mission" plot as the previous American issue reprinted by the title, it makes the series look spectacularly unvaried.

In the comic’s proper back-up strip, we get an entire issue of Peter Parker/Spider-Man without a sign of Iron Man 2020; it actually feels like this was a Spider-Man comic for the first time. This chapter is mostly involved with Parker being desperate for money to pay his rent, and having to chose between a dangerous assignment abroad from Jameson or being around for Aunt May’s birthday. We also meet the young version of the terrorist, who turns out to be a photo snob.

On the letter’s page, and surprisingly quickly, Grimlock gets the first question about the continuation of the volcano plot in the Annual, from Sean Stafford of Swansea. In this case it’s not a complaint, just some worried thoughts that Galvatron and Magnus could be about to die, a notion Grimlock naturally does nothing to dissuade so as to keep the tension up, something Ladies Night! will shortly kill off. Grimlock also explains why Blurr was skipped from A-Z, apparently the film characters will be done later (though that’s in keeping with the format of the original Universe series I’m going to guess this won’t happen).

It’s fair to say we’ve been in a fairly poor run of the comic for some weeks now, something that hasn’t been much fun to write about as the overall goal of this project is to be fun and upbeat rather than more depressing than an essay on Where Mike Costa Went Wrong. Luckily, here we turn a corner and next week we get an issue that, though still not pure gold, sees a more positive example of Uncle Bob’s current lighter take on the series. 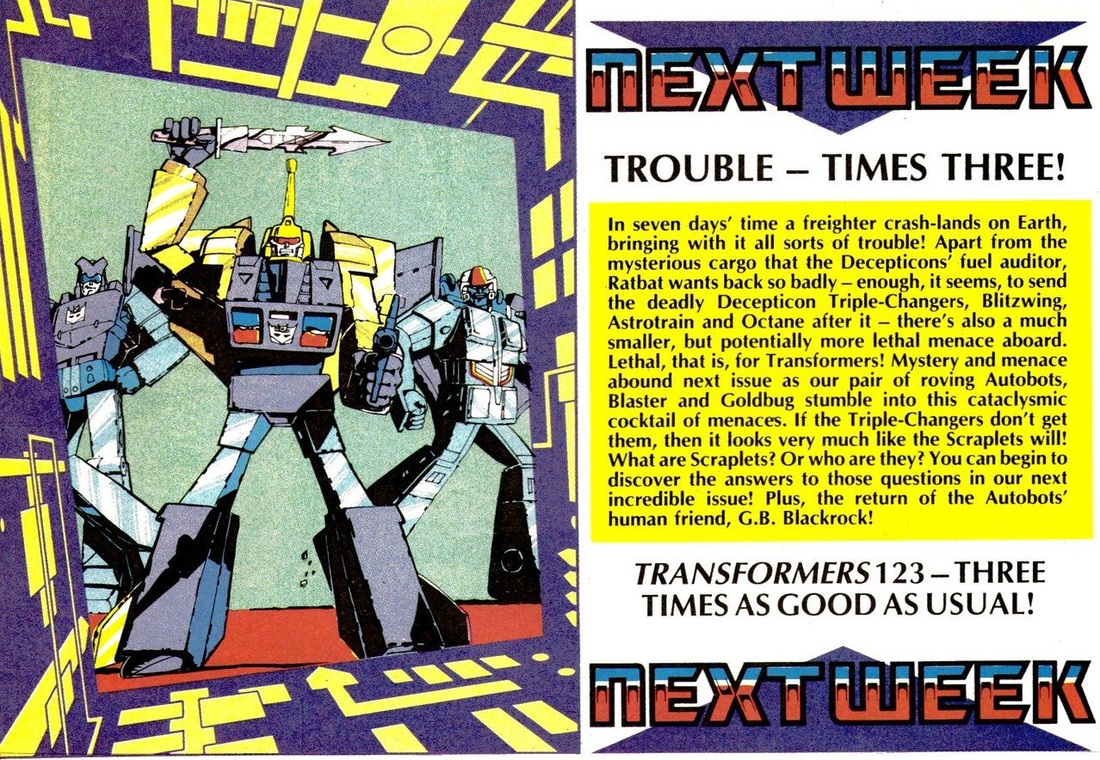