The Sunday Swap Meet is a Battleground. 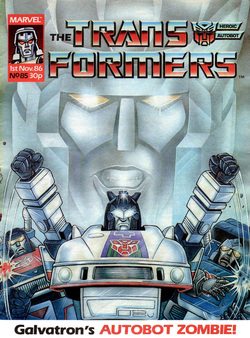 
Ultra Magnus will stop you Galvatron... Or die trying!


Did we all have a good Christmas? Mine was full of Blu Ray steelbook and whiskey shots goodness. In keeping with the season, the Autobots and Galvatron exchange presents this week, but one of them is going to need the receipt.

There's no subtitle this time round-possibly because someone remembered that the one suggested by the Next box at the end of last issue (Prisoners of War) was virtually identical to one from the original mini-series. The lack of extra text covering the opening page means that Will Simpson gets to make a bigger splash with the blowing up of the Decepticon spaceship that brought them to Earth in the first place.

"What Decepticon spaceship that brought them to Earth in the first place?" I hear you ask, and it's a good question as they originally arrived on the Ark. Whilst there's nothing to say it didn't exist it has never been featured before, and you'd have thought there'd be all sorts of gubbins up there that would be useful if it were still about. This is another, possibly the last, example of the comic taking inspiration from the cartoon (as opposed to the current use of the film) as the ship is in fact (visually at least) what we would now call the Nemesis as featured in the opening episode of the show. Presumably it's been co-opted for the comic as the story needs something big and in space for Galvatron to test his weapon on, and it makes for an impressive visual to open the issue.

Poor old Starscream.
Since his outburst last week Galvatron has regained his composure and is now more the smooth talking Bond villain than the shouty mad one. The scene following the test of him buttering up a hesitant (as a result of still bearing the scars of his beating from Cyclonus) Starscream is a delight, especially his friendly little asides. This is of course all very ironic from his point of view, Starscream thinks he's getting help from the man who will one day kill him. This gives Galvatron a fantastically cheerful laugh after the jet flies off to out their plan into effect that, if nothing else, shows he has a great sense of humour.

Someone who isn't having a laugh is Ultra Magnus, who is frustrated at having wasted more than four days on his hunt for explanations of what happened to Prime with exactly zero results. His agitation at his impotence is extremely well conveyed, but his luck is about to change as the three future Autobots arrive at the Ark.

Over at the prisoner exchange we get the set up for one of the most horrific sequences of the entire series, one whether by accident or design was perfectly placed for Halloween week. They say pride comes before a fall and Jetfire is surprisingly cocky considering the various humiliations already piled upon the Autobots, declaring they took down Scourge easily. His smugness is short lived when Galvatron reveals he knows about Megatron, and his past self and Soundwave are soon quickly knocked out by Starscream over at the weapon.

One hilarious thing about this sequence is the implication the Constructicons really don't care who's bossing them about as they have no interest when Megatron shows up again (knocking out Cyclonus) and none when Starscream makes his own surprise move.

Back at the Ark, Magnus and the future Autobots are comparing notes and we get the explanation of one of the most novel and interesting forms of time travel I've ever encountered. As you can't create or destroy matter and as there must therefore be a set amount of matter in the Universe at all times the only way to go back in time is to substitute something of equal mass, which is displaced to some uncertain place between dimensions (set up for issue 100 already?).

There's likely little real science logic there, but it's an incredibly evocative idea that's full of fantastic potential, some of which we've already seen with the "Death's" of the various vanished characters, and it’s a potential future issues will explore to the full.

The only slight fudge at this stage is the idea the characters we've seen displaced are of equal mass to their replacements. For example, Kup, Hot Rod and Blurr are all of roughly equal size but Shockwave, Thundercracker and Frenzy are all on different scales. Maybe some are hollower than others? Either way, this information sends Ultra Magnus off to the confrontation with Galvatron he's been building up to for the entire story without realising.

ARRGHHHH!
And the Autobots at the prisoner exchange are going to need all the help they can get because just as they think it’s gone smoothly...

That’s horrific, helped by being perfectly suited to Will Simpson’s art and is probably some of the most memorable, and crap your pants, stuff he ever did. It’s certainly enough to put the willies up his friends, who (for the second time in the story) are all taken out

Jetfire- who isn’t really making a very good showing of being Autobot leader is he?- gets an especially harrowing defeat as he begs Jazz not to force him to fire, only to not be able to bring himself to pull the trigger and get whooped anyway. It’s a fantastically done few pages that, despite in theory covering ground similar to the previous Autobot defeat, manages to feel fresh and different enough not to be repetitive.

Galvatron then goes over to Starscream, who is in the process of having a bit too much fun with Megatron’s unconscious form, and proceeds to knock him out as well (presumably the Constructicons have given up on keeping track of who’s in charge and gone for a coffee) before cheerfully declaring he’s won and that no one can stop him now.

Leading to what is easily the biggest, and best remembered, Big Damn Hero moment of the entire comic’s run, and indeed when you’re 10, of all fiction ever, when Ultra Magnus looms over Galvatron with the above quote. These two characters have been very deliberately kept apart and in their own plots for the last two months, circling each other at a distance without even realising. The anticipation that has now been built up by this delayed gratification is about to be released in the biggest, messiest way possible.

After the dip last week this sees the story find it’s grove again, fitting the pieces into place for the final stages of the adventure with a great deal of style and even manages to find a few new toys in the box to play with in the horror content of the

Oh dear. I need a lie down. 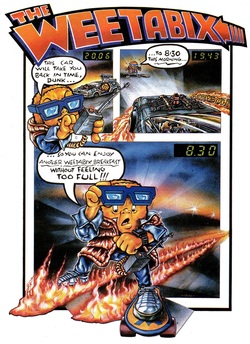 Where we're going, we don't need breakfast.
With us reaching the time of year when the first thoughts of planning for Christmas start to come into parents’ heads, Transformation gives us the first round up of available toys since Cranna’s time as editor. Considering everyone else mentioned has already been in the comic by this point it really does hammer home how long the gap between Metroplex’s arrival in toys shelves and his one and only appearance stomping Quintessons is.

In Grim Grams, Grimlock has to admit to Andrew Page from Orpington that the release of the film has been put back from November 20th (a date the comic hasn’t firmly confirmed before, showing how sudden the push backs have been) to the day it will finally come out, December 12th. You’ll note that’s even later than the December 5th I’ve been quoting from the Wikipedia page of the film (and it’s confirmed by THIS release poster that regular scamp Tim Roll-Pickering found last week), I’m not sure where the later date came from (premier? Advanced screenings? Complete inaccuracy?) but that means the British distributors are finally committed to a film they clearly would rather not be releasing by this point.

I suspect if the home video rental market in the UK had been as firmly established as it would be even a year later it would have gone the Action Force: The Movie route of straight to video, after all, it’s fair to say that 99.9999% of the money the film will make in this country will be via Blockbusters.

Hercules ends his adventures with Galactus turning out to be a bit of a Peter O’Toole when it comes to drink, but even without Herc’s home brew having any effect on him he’s so tickled at the attempt he decides to spare the planet in exchange for having had his first laugh in a long time. The Recorder is then recalled as Hercules has run up a massive bill for his services, but our hero is not left alone for long as the opportunity for more skanky sex with Galactus’ herald presents itself.

This has been easily the best of the backups to date, completely daft and huge fun with some fantastic art. Spitfure and the Troubleshooters has some Galactus sized shoes to fill. Hercules himself signs off with a full sized poster for those of you that just have to have a big oiled Greek on their wall.

The last page gives us a special Halloween Robo-Capers, but the one and only thing anyone is going to notice about that page is the half-page advert for next week, with Galvatron riding Ultra Magnus like a pony in full Geoff Senior glory.

But before that, we open 2014 with a new year’s special, with a nice wintery theme for the time of year. Join me on the 1st for Hot Rod taking on an army of Patrick Stewart clones.

And remember, THE QUIZ is still on till the same date.