Trio, Trio, I Want a Trio and I Want One Now. 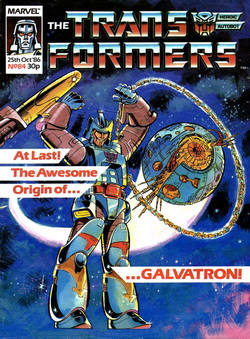 
Well, I suppose that'll leave me with one less thing to worry about in my old age!


Very appropriately considering the subtitle of the week this isn't so much an issue of two halves as one of three thirds. Oddly only the last, and shortest, of these three actually moves the plot on. Of the other two, one is the sort of shameless toy pimping even Dark Cybertron would look at and go "Ouch, that's a bit shameless" and the other is character background that to any reader coming to it now is going to be very old hat.

In theory the opening starts off quite strongly (at least for anyone who hadn't been paying attention to the advert for certain Triple Changers that's appeared in the last few weeks) as Impactor, no doubt out for a sneaky smoke, is attacked and bested by three big bad ass Decepticons who make fast work of him.

Senior's art gives Springer, Broadside and Sandstorm a hugely impressive début and the entire fight is perfectly executed as you'd expect from the man who is rapidly becoming the stand out star of the book. There's also a nice pay-off as it turns out the three are actually [SPOILERS] Autobots, sent by Xaaron to fill in for Ultra Magnus should the need arise, the entire confrontation being stage managed because Xaaron knew a physical demonstration of their skills would be the one thing to convince Impactor. The look on the face of the Wrecker's leader as he crushes the SPACE phone Xaaron has used to tell him this is priceless.

So what's the problem I hear you cry? Well, it's a retroactive one in relation to the rest of the story. Subsequently Springer is going to be a very important character (and the other two will have their moments), but as far as just Target: 2006 goes, after four pages being given over to introducing the three new Autobots they will contribute exactly nothing beyond a flashback they-really-shouldn't-be-in and a name drop right at the very end.

The entire sequence is clearly there at Hasbro's behest and in its own way just as poor as the shoehorned in introduction of the Special Teams was, albeit better staged. Certainly it would have been smother storytelling to just have the three new guys be part of the Wreckers already in the featured issue for that team, even if had been at the expense of some of the less high-profile toys.

Remember this in two weeks.
Luckily, things pick up in the character focus section of the issue. Whilst, like last week's cliff-hanger, the impact of Galvatron's story is going to be lessened for anyone reading after 1986 and some of the logic in his telling is a little wonky as it requires him to become the big gloating villain- as there's no other reason for him to share with Jazz- we're still into a visually arresting sequence.

Chronologically this is of course our first ever appearance of Unicron, and indeed the first of many, many reworkings of scenes from the Movie. It's all very careful not to spoil anything after the first 15 minutes of the film and equally carefully avoids mentioning the death of Optimus Prime (which makes a sort of sense as Galvatron wouldn't want to give away something the Autobots would work hard to change, even if it doesn't quite fit in with the "Gloat gloat gloat" nature of the speech), and Senior's art is good enough to make you wish he'd drawn either one of the comic adaptations. Watch out especially for the shot of Megatron firing at Prime with a strong back-blast coming out of his cannon; it'll be getting a visual call-back in a couple of weeks time.

There's also the suggestion that either the UK team had been given more up to date information on the film by the time this issue was written or whatever material Furman was working from that contained "Life Spark" was a later draft than is currently known to exist with that term in it as the flashbacks/forwards are much closer to what we'll see on screen than in the script Ron Friedman sold a few years ago.

Jazz also gets what I think is his last decent bit of non-zombie screen time until the black and white era, and it's a fairly solid appearance with him getting to show off some of his wry humour even in the face of extreme torture. The sequence also takes us into the end game of the story by paying off some of the long standing mysteries set up in the first half as Galvatron explains exactly what his big machine is for: to destroy Unicron upon their return to 2006.

It is perhaps slightly unsatisfying that our heroes don't work this out for themselves and are dependent on the villain just telling them (and considering what happens to Jazz next week does anyone else ever find out? Or even care?), but the scope is still impressive, even if things like how Galvatron is expecting the machine to be left unmolested for two decades now the Autobots know where it is will never be explained.

We also see our first real cracks in Galvatron's armour as Cyclonus arrives to reveal that Starscream wanted a team up, but the purple one just beat the jet up (mainly for fun it seems rather than out of any great expectations), meaning he now knows all about the Megatron/Autobot team-up. This added strain on his plan coupled with Jazz's quip about "Megatron Vs. Megatron" causes Galvatron to snap and start shouting "SHUT UP!" as he delivers a two fisted blow to the Autobot. As well as being a sign of things to come in future stories this inability to cope with drastic changes in plan and to just wind up acting on impulse is going to be important to the grand final.

The balancing of past and future.
It's the third segment of the story that really kicks the plot into its final phase though. At the coal mine Thundercracker and Frenzy have also escaped from the Ark and have arrived to find Shockwave (who up till now has been having tea with Omega Supreme), with all three of them deeply confused as to what is actually going on.

"Meanwhile", we get our first "current" scene set in the 21st century as Hot Rod, Kup and Blurr (astute readers familiar with the film and the point in it Galvatron must have come from may be wondering how the Autobots in question could be doing what they're doing here at that time. This isn't due to poor information being used by the UK team, but set up for a plot twist) are preparing to use the time machine on Cybertron to come back and get Galvatron, and in doing so give the first real clue as to what happened to Prime, Ratchet and Prowl as their arrival in 1986 makes the three Wyoming Decepticons blow up in exactly the same way.

Firstly, it's interesting it's using Earth dating at all rather than vorns and breems... A translation conversation for our benefit or is this actually stolen human technology (I think we can rule out the amazing coincidence of Cybertronian dating for late 1986 just happening to read almost exactly the same)?

Secondly, assuming the dating in the British standard of Day-Month-Year (the American Month-Day-Year system might make more sense in-Universe as that's the country the Transformers spend most of their time, but moving this to November creates even more problems), the 11th of October was the release date of issue 83, so the comic is trying really hard to keep things as much in "Real time" as possible.

The fact it didn't pump for the more obvious release date of issue 84 itself in order to have things bang up to date is a surprisingly solid bit of secondary evidence for a theory put forward by long time reader Tim Roll-Picker in a comment on my write up for issue 82 (a comment I already nicked a couple of ideas from for last week's entry, I am a shameless thief). Namely, that the standalone Wreckers issue reads as if it were added to the story at the last second (or at least as much at the last second as these things can be done) in order to either move the end of the story closer to the ever changeable UK release date of the film, or because Hasbro UK were desperate to get some immediate promotion for the huge stockpiles of Jumpstarter toys chocking British shelves at this time. It's all speculation of course, but everything subsequent being moved forward one issue at the last second would explain the dating being a week behind here.

Or it's a case of reading too much into things and when Furman/Senior were working out in their head when the issue would be on sale they got it wrong. Either way, mid-October doesn't really gel with the description in Part 1 of it being late Summer (though issue 79's publication date of late September would just about qualify in a good year, someone has forgotten this story has an inbuilt ticking clock of just five days rather than the three months it takes to tell), but that's nothing compared to the dating problems this creates with the very next story.

The issue ends on an ominous note as the Autobots arrival causes an as yet unexplained evil laugh to reverberate across Earth and Cybertron and makes even Galvatron pause. Overall though, this is the weakest issue of the entire story despite some good art and nice moments here and there. Some of the flaws are only retroactive ones as no one involved was ever expecting this would be read a quarter century after we'd all become very familiar with the plot of the film, but the Triple Changers stuff is still fairly poor padding by any standards. Luckily this is only a brief blip and things will be back on track next week.

One of the things described here will actually be published.
The Transformation page is finally able to peg a release date for the film after being so coy about it for months, but the offer of late November is still going to be out by a week as it gets put back again till the 5th of December. It also pimps the forthcoming special running the Movie adaptation and two other specials that will wind up not happening collecting the Universe series. Perhaps strangely there's no mention of what may be the most obscure Marvel UK publication (certainly I'd never heard of it before getting my copy as part of inheriting this collection) which must be out fairly soon, the film poster magazine.

Over in Grim Grams, Andrew Parkinson from Leeds shows he's been paying attention as he almost correctly guesses what's happened to the three blown up Autobots, the almost (he thinks they've been displaced to 2006) presumably being why the letter was published as it doesn't quite spoil anything.

Hercules reaches his penultimate instalment, and after defeating the herald of Galactus with sex he decides to take down the big man himself (whose Death Star style ship has a maw exactly like Unicron's by the by) by getting him pissed. These two things meaning the series is almost summing up everything it's been about as it closes.

Next week Jazz does the zombie thing 25 years before it was cool. And speaking of cool, I hope you all have a very merry Christmas (and don't forget THE QUIZ), the close of the year should see a special Addendum on a story close to my heart as an extra little gift from me to you. 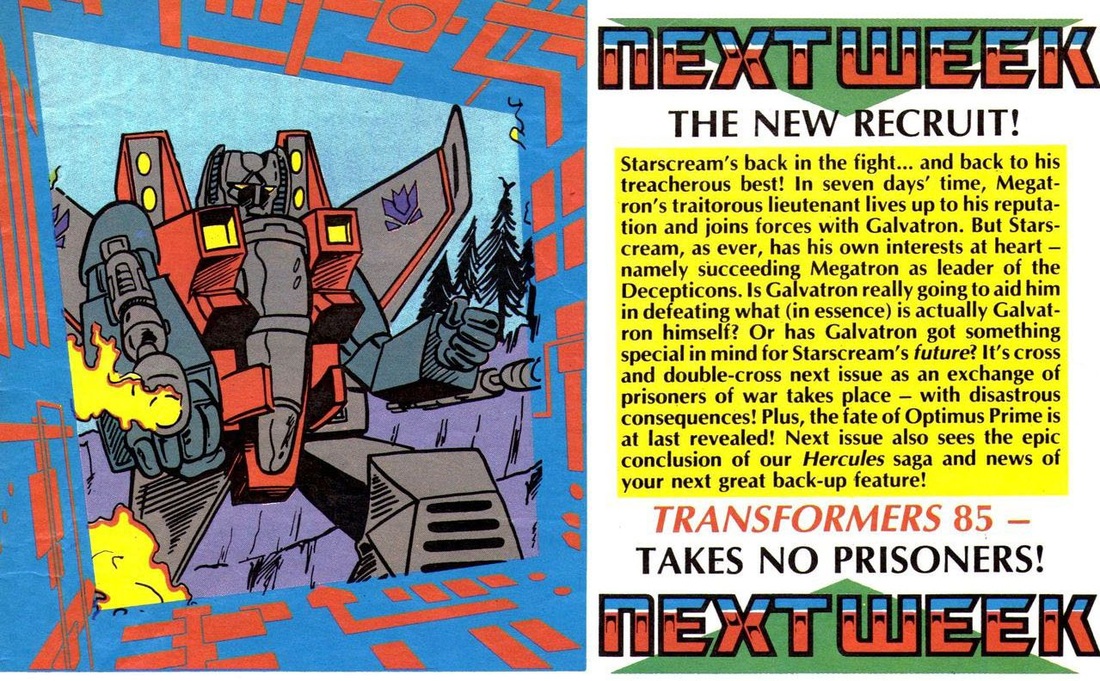