No More Excuses, No, No. Because I've Heard Them All Before. 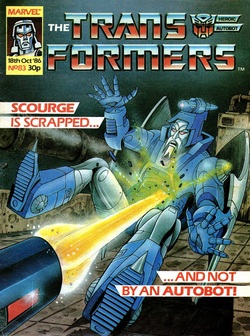 What’s happened? Who organized that rabble? No matter, my superior strength and weaponr--AHH!

But first I should point out something that also applies to last week's issue, that for the moment the individual issues have their own titles that are printed above and larger than the main Target: 2006 card. A as such, if you're so inclined, you can refer to the titles of these parts the other way round to how I've been writing them (personally, I just like it that way).

More importantly, this began at the point Target: 2006 became (discounting the artificially extended at the last second Enemy Within!) the longest story the comic has yet done. Though the epic length was something of a selling point when the story started for a company that prided itself on its accessibility and that any issue could work as a reader's first this has now become something to downplay as to not put off those floating readers.

After last week's diversion, we're now back at the plot, with Furman still stretching his writing muscles as he tests the waters of what does and doesn't work for him as we not only open with the now standard flash-forward but the first and last pages are designed to mirror each other with identical layouts and similar dialogue. This bringing of things full circle actually helps with the feeling of this as a self contained story with a beginning and end despite it really being nothing of the sort.

Things open with the first of several times Furman will bring back a character written out of the American series almost immediately as it turns out the character we saw doing his best impression of an Earthshock Cyberman two weeks ago was Starscream, bursting out of what looks surprisingly like what we would now call a CR chamber and serves a similar function of repairing damaged robots. Which leads to a nice gag as Starscream mocks the Autobots for looking after their prisoners.

Exactly what caused Starscream to wake up (without any sort of alarms being set off either) is the first of a couple of things between now and his return to the American book related to his continued liberty that will never be properly explained. Stopping to set Frenzy and Thundercracker to wake up as well (for plot based reasons the other captives are still too damaged) Starscream heads off to follow the sound of voices, leading to the "Can't believe what he has just seen" moment that opens the issue as he finds Megatron leading the Autobots! 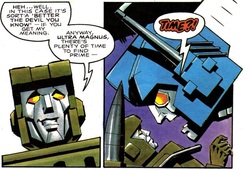 "It must have scared the LIVING DAYLIGHTS out of her"
It's Geoff Senior!

It's almost inevitable that any series with a main recurring villain or group of villains (and if there's more than one such group the series can do endless variations on this) will do the story where the good guys and the bad guys must team up to fight a bigger and badder foe, usually in an awkward way with lots of bickering and an inevitable betrayal at the end.

It's a decent way of escalating the scale by suggesting a threat twice as bad as anything the characters have faced before and has long been a favourite trope of Transformers, even though this is the first time the comic has done it the cartoon had gotten there first with The One Where Optimus Fires Megatron in Gun Mode, and there will be many more in the years to come. This will reach its nadir in the inept Mike Costa's Chaos story, where Optimus Prime is almost a small girl wetting herself in fear as the heroic Megatron saves the day.

So what follows is pretty much what you'd expect,  Megatron trying to boss people about; lots of bitching and moaning; some “I'm better than you” back and forth and ultimately a very reluctant agreement from the Autobots to follow Megatron's idea to get Jazz back. As standard as it might be though it's still very well done, with Megatron, Ironhide and Jetfire all coming over very well as robots under stress.

Everyone finally agreeing leads to a lovely scene where Ultra Magnus goes bogly eyed at the idea when Hound tells him about it, and actually gets a relatively calm introspective moment where he actually gets to explain his situation to the little green scout (who also gets his "So you lived to DIE ANOTHER DAY" moment with a title drop as he quotes Kylie).

It is however probably lucky for Magnus that when we get to see his fancy wrist watch again his arm is coloured like Hound's, distracting the reader from the fact he's basically wasted close to a fifth of his time building a little fence around the residue left by Prime's explosion.

Megatron's plan is a good old fashioned hostage exchange, but first they need a hostage, which leads us to the big action set piece of the issue as they pounce on Scourge whilst he goes shopping by himself for parts of the Mystery Machine. This is fairly smart sequence in that it doesn't make Scourge too easy to defeat, but at the same time doesn't make him ludicrously powerful.

So, despite being in a confined environment (of a steel foundry), unable to use most of his vehicle-mode only weapons and badly outnumbered he still puts up a good fight, taking out Grapple and Trailbreaker. However, sheer weight of numbers are still a factor and that coupled with a good old whacking from Megatron soon take him out.

Even Hoist looks cool.
This is a good moment to talk about little sung hero Geoff Senior. It's amazing to think that, covers aside, this is the first time he's worked on the book in ten months (though those who got their Annuals early will have had a special Senior treat already), and yet it feels like he's never been away. Not only is he possibly the only artist who could pull off the odd decision to draw Magnus and Hound in their toy scales, but every single panel in the factory scenes is just pure dynamite. One panel of Scourge throwing a sheet of metal is possibly the single coolest moment the blue beardey one will ever have.

It's not just about the art though, this is Scourge's big solo scene in the story and Furman writes him as a nice wry grump, and it's surprisingly easy to hear his subsequent cartoon voice in the role.

The fight, however well done, is not what would have been the most memorable thing about the issue to contemporary readers. It's hard to gauge now, 27 years later, how well the big reveal on the page that mirrors the opening would have worked as a surprise. It's the Transformers equivalent of Planet of the Apes; no one can come to it fresh without knowing the twist, least of all me the first time I read it in the early 2000's.

So to a certain extent it almost feels like it was too obvious, the scene with Laserbeak recognising him back in Part 1 especially seems to tip its hand too much. But that's a retrospective thing that is helped by knowing the film inside out. At the point this comic was done we hadn't even had a new toy of an old character before, so the whole concept of Galvatron being Megatron likely came completely out of left field to most readers and worked as the massive shock it was intended to be.

It certainly shocks Jazz, and though his eyes are slightly fudged to make the parallel with Starscream's work (I really don't like the idea he has more humanoid eyes and the visor is more the sort of little green hat a gambler wears), his instant depressed belief in the gloating Decepticon's claim carries great weight and makes for a fantastic cliffhanger to an all round solid issue.

There is more than a comic this week though as we also get Cybertron: The Middle Years. What looks to be a straightforward one page summary of what's happened on Cybertron in the last four million years is impressive in just how much detail it adds in so short a space, taking the throwaway mention of Lord Trannis in earlier parts and giving him a complete, rich back-story before killing him off and replacing him with Straxus in time for when the American stories introduced him. It's a master class of economy of storytelling that also explains what happened to the rest of the Council from And There Shall Come... A Leader! and fills in some more examples of Xaaron being golden awesomeness.

During last week's Hercules I almost made a joke that the fact Galactus' herald was a (literally) hot woman meant our hero would almost certainly solve the plot by shagging her. Space prevented it, so imagine my annoyance at missing the chance to be smug as that's exactly what he does here. That still leaves Galactus himself though, and unless there's a really super king sized bed about Herc will need a new plan next week.

It's also amusing Galactus seems to be flying the Death Star. I'm not familiar enough with the character to know if this vessel actually predates Star Wars, but it does make the Unicron comparison all the more overt.

Next week, some bizarre product placement for a popular 1980's chocolate bar. Impactor wants one, and he wants one now.

[Also, as can be linked to below, the Christmas Quiz is still ongoing!] 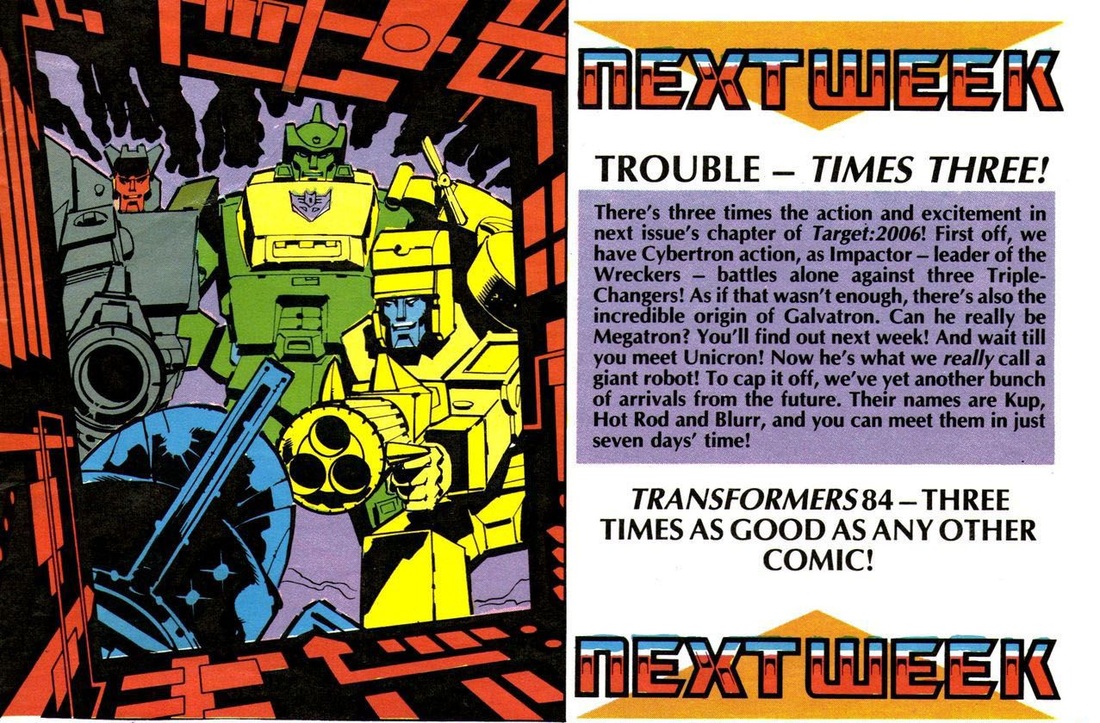