Where's My Support Now? Where's the Ranks of the Strong? 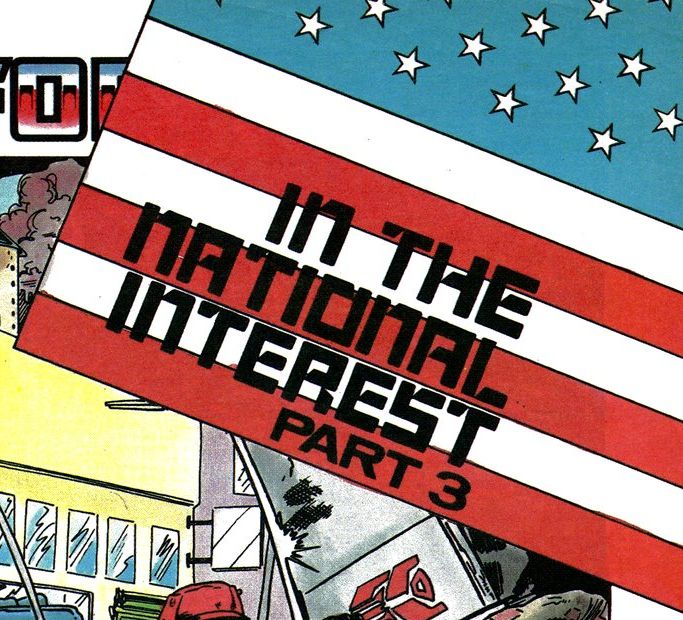 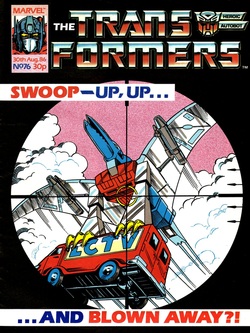 Unfortunately, something of Triple I's has finally lived up to its publicity.

The opening of this week's issue really shows the advantage of reading the British stories at the original publication rate of one every seven days. It's effectively a two page recap of events so far, rather stylishly told by Swoop as he comes round in his wrecked building bed feeling all groggy and wondering about this weird dream about journalist’s and Megatron.

If you're reading this in one of the various trades, or even going through the original issues rapid-fire, this opening is entirely redundant and easy to skip over, it can even feel a waste of space. It's easy to forget that this was intended to be read in instalments rather than all in one go, and there would be a great deal of floating readers for a comic this popular who wouldn't be picking up every issue. The halfway point of a month long story is a sensible place to take stock, refresh memories and bring those who missed previous issues up to speed.

This is exactly the sort of sequence no modern Transformers comic would bother with to such an extent, the current kids-aimed British title no longer does multi-part stories and IDW can generally assume a captive audience buying every issue and paying very close attention so a simple "Previously..." page and the odd "As you well know..." line of dialogue is more than enough. Whilst that does leave more space for the story, if you're going to have to deal with the practicalities of weekly storytelling Furman shows how to do it with style here.

Much like Regeneration One.
After this opening we're straight into the conclusion of the Megatron/Centurion fight. Considering Centurion is a character created by the author and is in combat with somebody else's property it would have been all too easy for the fight to be a showcase for how super awesome Furman's baby is as he wipes the floor with Megatron. Death's Head will fall into this trap more than once later on (though as that's in some of the very best stories the comic will do, showing it's not automatically a bad thing), but here, though Centurion is tough, he gets beaten by Megatron because logically there's no way a man built machine should be better than advanced alien war robots.

Swoop meanwhile has a nice Meta moment of being a reader substitute, so rapt in watching the fight he forgets he's supposed to be rescuing the humans and has to be prompted by them to flee. Nicely Furman remembers his injuries and has taking off with the camera van be a struggle for Swoop. We then get our cover moment as the Dinobot is seemingly caught in the sights of a gun, but it just turns out to be a tracker fired by a Triple I man. Now, if only they'd thought of just tagging Swoop last week.

We're then into the meatiest scene in what is otherwise a bridging issue. This checks in on Triple I as scientist Grady (who presumably got into this mess by listening to Eminem's advice rather than Dr. Dre) has to handle a large amount of exposition. This includes the fact Morris has (somehow) locked himself in the control room and (for some reason) can't be unplugged.

You can see why Furman didn't show any of this as it's hard to see how it could have been done on-page convincingly, but to counter the chunky plotting the barely suppressed rage of Forsyth and the buckets of sweat Grady is sweating emphasise the dark undertones of the story. We then get a nice scene of Morris, brought back to sanity by recognising Swoop, marching in search of III's bug in order to make the troubles he's caused right.

Easily amused. Much like me.
Back at the beach, the Dinobots are having a good laugh at the fact Swoop is stuck mid-Transformation. It's a cute scene, and also emphasises that thus far; and dawning on the final quarter of the story; for most of the Dinobots this has been a bit of a lark. Only Sludge (for love) and Swoop (due to being dropped in the middle of crap-city) have any investment in Joy's situation, for the rest it's a welcome break from their own more galactic problems, they regard dealing with human problems as small fry compared to fighting Megatron.

So it's unfortunate for them their lackadaisical attitude means they only find the homing device after Soundwave has already used it to bring Megatron and the Constructicons to the beach. Or, more accurately, out of the sea, which tops Centurion bursting up out of the ground in the silly stakes. How do they do this silently? How does Slag not see them when it looks as if they should at least be in his peripheral vision? Where do they come from (this would make more sense in the cartoon where they have an underwater base)?

This slightly bonkers moment is saved by two things. The first is Slag's Penfold moment ("Ooh 'eck", it's hardly surprising he'll later turn out to be a Carry On fan), the second is the faceoff between Megatron and Grimlock. We've seen them fight before, and will again, but this is the only time they'll ever get a classic hero/villain verbal banter thing going, which is perhaps surprising considering Grimlock's double run as Autobot leader. Whilst it's fairly standard stuff (Villain: Give me what I want! Hero: Sod off) it's nice to see these two major characters get to talk to one another.

There's actually something nicely comic about Megatron coming all this way, through the ocean no less, to get Robot Master only to be completely on the wrong track, and Grimlock gets to look cool in a sword wielding pose that's already been snapped up for the newsagent order form that débuted last week. We're then into the cliff-hanger as Megatron decides Grimlock is to dull to talk too ever again and orders the Decepticons to take off their armbands and DESTROY THEM! in his best David Banks voice.

As noted, this is very much a bridging issue moving the various pieces into place for the final next week, but Furman by this stage is confident enough to do this with enough frills to keep things interesting and fun throughout. As ever, God is in the details, and there are lots of lovely little moments here.

There's an interesting and subtle change in the art this week, virtually all of Simpson's work is contained neatly within panels whilst in the previous issue it was a lot messier with a huge amount of overlap between frames (which made selecting ones for the write up a right bugger). The Classics UK books mention that Geoff Senior would have his similar tendency for none-conventional layout reigned in after Target: 2006, I wonder if a similar word was had with Simpson during the middle of this story, or if it's simply a case of the workload requiring him to keep things simpler at this point. 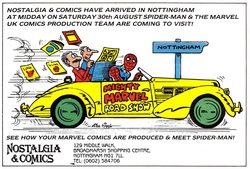 Why does Spider-Man need a car?
Transformation promotes the Hot Rod toy, and in particular that the "Real" Hot Rod will be making of British toy shops during what remains of the summer and autumn. That must have been something to see, and again hints at the fact the release of the film was originally intended to be earlier than will wind up being the case as when this tour happens kids won't have enough of a clue who Hot Rod is to be that excited about meeting him, he won't even be showing up in the comic until autumn is well underway. Indeed, the reference to summer events in an issue printed in very late August suggests this piece was originally written to go in a slightly earlier issue.

Grimlock meanwhile is still dealing with Soundwave's left-overs, and tacitly ignores the fact, pointed out by cartoon fan (well, there had to be one) Farhan Khan from London, that the series is made Marvel productions and is thus (in his eyes) kin to the comic. There's also another chance to plug Target: 2006 and the hint Straxus may well get better from having been blown up by inter-dimensional space.

Following on from Hercules two weeks ago, we get another unconventional fact file; presumably the plans to bring Universe to the UK were at the halfway point between being thought of and scuppered and these are intended as a place-holder whilst decisions are being made; though at least this time it's about the stars of the comic. Rather than a straightforward personality piece on one character we get a potted history of all the Dinobots’ adventures to date. This probably would have made more sense swapped with the Hercules one at the start of the story rather than in the middle, but it's still a nice little bonus.

Hercules himself does a first for the comic by totally having sex whilst his robot aide tries to spy on him at it (in order to "record" every detail of his master's life, that's what they call it these days is it?). There's a brilliant subversive gag where he tells his lady the traditional immortal hero tale of how he can never settle down because of the way the one great woman in his life aged and died before him... Only to think to himself he's making the whole thing up as an excuse to use her and dump her. I wonder if Highlander and Doctor Who are up to the same sort of scam every time they whittle on in the same way.

It may also be worth noting at this point that long term reader Tim Roll-Pickering has pointed out Herc's black costume actually predates Spider-Man's, destroying a theory of mine last week.

Though there's another, full page this time, advert for the Annual (which is considered important enough to get on the contents page), my favourite thing in the whole issue is an advert promoting the fact Marvel UK and Spider-Man are helping to open the new Nostalgia and Comics in Nottingham.  I wonder if it's still there? The Birmingham branch is, indeed Auto Assembly was held above it for three years before it went upmarket from the Holiday Inn to the Hilton. I also wonder if Spider-Man and Hot Rod ever hung out?

Next week it's Halloween! Well, unless you're reading this years in the future, but wouldn't it be spooky if you are reading this on Halloween? In the new tradition of characters jumping out of unlikely places will the story conclude in seasonal style with Optimus Prime jumping out of an open grave? Join me again in seven days to find out. 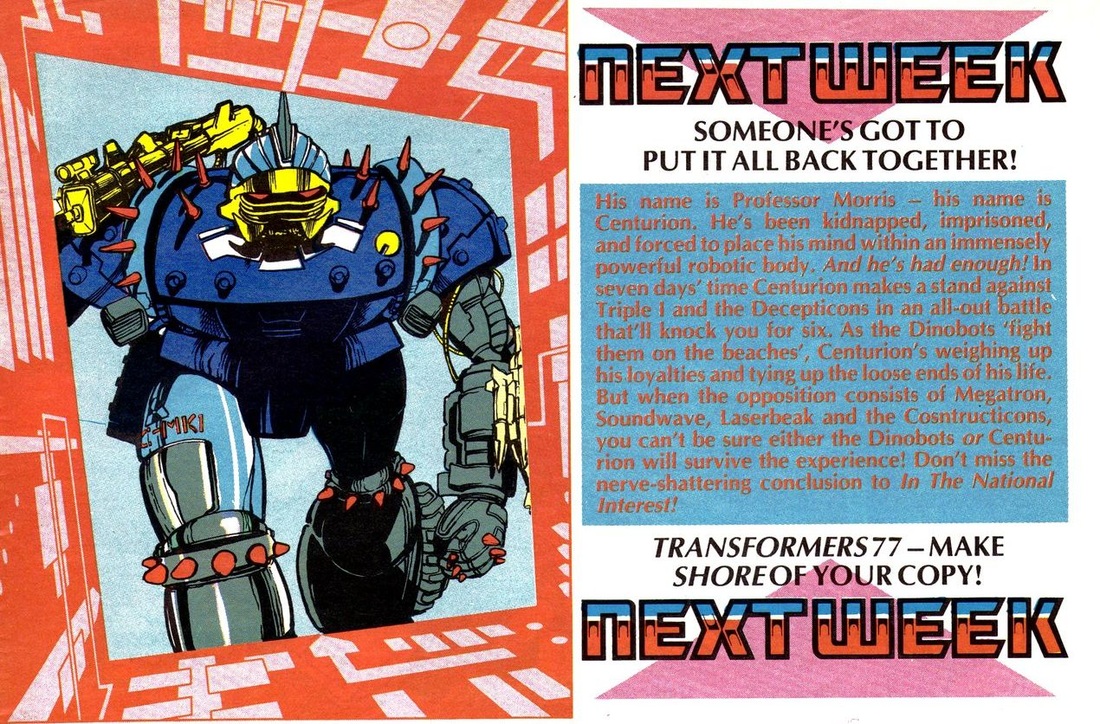