And the Ashes of Your Memoirs Will Be Strewn Across the Lawn. 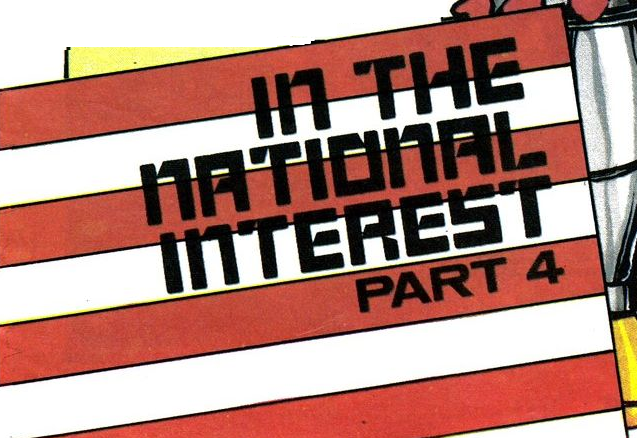 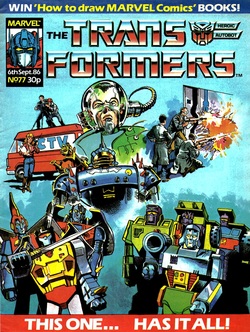 And so they left. No one bothered to stop them... It's hard to fight for a lost cause.

So here we are then, the issue before the issue that changed everything; the issue before the one that is usually the one people new to the series start with as their first story. The Planet of Fire to Target: 2006's Caves of Androzarni. Even the comic itself seems aware something Big is coming and that can make the climax to the Dinobots adventure very easy to overlook. This would be a shame because, like Planet of Fire, it may not be the greatest, but it’s still pretty good in its own right.

As with last week we open with a recap in the form of a character thinking back on events, in this case Professor Morris. Swoop's muddled thoughts as he recovered consciousness were a little more natural feeling and the way Morris is thinking is a little odd- It's as if he's telling someone his story but it's never entirely clear who or when. Unless he's breaking that fourth wall?

Despite this, the scene does nicely set out his character motivation, which has moved beyond simple guilt at the events of The Icarus Theory and become a full on rage at all bullies who pick on the weak like Triple I do (there's the implication there's still some residual pissiness at his equally domineering Roxxon employers). The narration even carries over into the first new scene of the issue as Centurion comes across the Dinobot/Constructicon fight and quickly sums up who are the victims and who are the oppressors with a feeling of complete disgust. 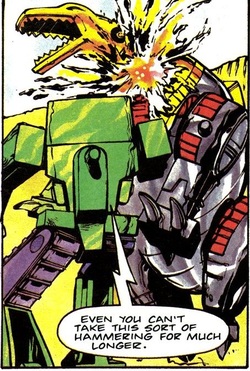 All for the love of a good woman.
The fight itself is one of the most varied we've had to date, with Furman taking full advantage of the large cast to split everyone up into mini-struggles, all of which have a different feel. From Grimlock and Megatron wrestling verbally as well as physically through Snarl getting the better of Scrapper only to fall fowl of Laserbeak via Sludge going apeshit at the thought of harm to Joy the action successful juggles all the different elements and keeps the pace nice and fast.

It's at this point, with the Dinobots losing, Centurion (who manages to keep up the narration throughout) joins the fray. As with last week, the script is careful not to have the author created character be super super awesome: It's clear he's helped by the Constructicons already having been worn down and the Dinobots remain in the fight as well.

There's one delicious bit of irony as Swoop goes straight to Centurion's aid in return for his previous help (the fact Swoop is unaware the human he hates most is controlling their new ally is one of the few threads from this story that will actually get followed up on), picking up Mixmaster and hurtling him into a cliff. Soundwave's nonplussed expression as Mixmaster lands at his feet is my favourite bit of art in the whole issue, and is a nice visual way of linking from the previous Morris focus to the thoughts of the communications officer which we'll be following for the climax.

Now, I’ve waxed lyrical on the joys of UK Soundwave before, but as with his stint as stand-in-leader, he’s once again shown at his pragmatic best and leads the Decepticons to a nice strong victory. Working out in his head that the new robot has turned the tide in the Dinobots favour he decides to simply cut to the chase, and goes over to the humans (and there’s a big tactical error on Grimlock’s part in leaving them undefended) and proceeds to tell them carefully, and slowly, that they will either give him all the information they’ve recorded and promise not to try again or he’ll fuck them up really, really good. He then proceeds to have Laserbeak zap the tapes and declares to everyone that the battle is over as there’s no longer any need to fight.

Soundwave rocks.
It’s a fantastic scene that is then followed up by a very bleak wrap up as the Dinobots and humans sit around feeling sorry for themselves, with Joy making empty promises to carry on regardless even though it’s clear she’s literally crapping herself. As the end to this era of the comic, which has generally had dark sombre conclusions, it’s just about perfect.

But there’s one final coda, as Forsyth smugly declares to Morris through the door of his sealed bunker than Triple I have covered their asses by destroying everything that links them to Robot Master and Centurion, and sooner or later Morris will have to come out; at which point he’s a dead man. But Morris has a year’s supply of food and water, and it won’t take him that long...

Except we’ll never, ever, hear from this plotline again. Morris is in one more issue and Centurion in two stories and one cameo, but this big deadly vendetta against Triple I is going to be completely forgotten, with the scientist seemingly having given up on it entirely in order to go cross-country hiking with the Dinobots before he himself is forgotten as well. So surprisingly early in the run we’ve reached the first real overt example of what to this day is Furman’s biggest problem as a writer: His inability to pay-off on long running plots.

Now, obviously with him being such a prolific writer there are many good conclusions he’s come up with over the years (Legacy of Unicron and On the Edge of Extinction being prime examples), but equally if something is going to go wrong it’ll usually be when it comes to wrapping things up. Often there may be outside constraints- Time Wars is a glorious mess because of the uncertainty of the comic’s future amongst other reasons- but it’s happened enough to suggest his real strength is in rolling storylines and set up rather than neat endings. Which is arguably why his work on modern comics with their requirement to fit more into neat six issue trades has generally been so disappointing. Even in something as straightforward as the Titan comic he managed to forget EVIL Jazz when wrapping up the alternate Universe storyline.

Of course, there’s one fairly obvious reason why Centurion will never get his revenge on Triple I, and that’s due to the fact they’re an ongoing element of the American book and will be for a couple more years (and of course, at the time Furman would have had no way of knowing they were ever going to fade from Budiansky’s work). It’s effectively impossible for him to follow through in any meaningful way on the Morris stuff because he can’t risk doing anything serious with Triple I when they could show up exactly the same as normal in any following American issue. Throw in the fact their increased presence in the American stories will put the Dinobots mostly off-limits for the UK team and this whole story is on a hiding to nothing.

Even with those provisos, wouldn’t it have been much more satisfying to see the space taken up by the Swoop/Divebomb story (which, as good as it is, is mainly there to rationalise one line from The Icarus Theory) used to give Centurion and Morris a decent send-off? It shouldn’t have been so hard to come up with something that still involved Predacons and an Annual prequel that works as a standalone, and Morris failing in his mission against Triple I (thus keeping them safe for Uncle Bob’s work) would have been entirely in-keeping with the generally downbeat nature of his stories as well.

Yes, you’d have had to rework Fallen Angel (maybe just have Centurion damaged rather than destroyed?) and substitute an Autobot for the rebuilt version in Ancient Relics, but considering Centurion in the later story is portrayed so differently from how he was previously it’s hard to see any great loss there.

The shame of it is that by itself this is a very well done climax (and Simpson’s art mirroring the clenching fist of Morris with Centurion is very nice), this is effectively the first story to have a completely different feel when you know what’s to come rather than arriving at it fresh.

Still, overall this is a decent, if flawed in places, story that balances politics and action extremely well and is by far and away the best appearance of Triple I in the comic. 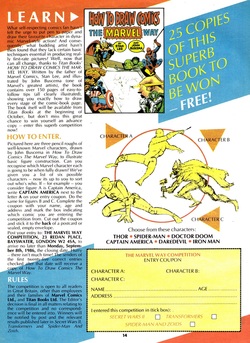 Marvel-ous competition.
The rest of the comic is fairly quiet this week as we’re in the lull before the (time) storm. There’s a competition for the How to Draw Comics the Marvel Way book which, in filling up a whole page denies a proper “Next Week” preview for Target: 2006, meaning the promotion for the Greatest Transformers Story of All Time has to be squeezed into the bottom of Grim Grams.

Speaking of which, and appropriately seasonal for Halloween, Jonathan Stevens from York points out the “Hit single” Amityville by Lovebug Starski seems to have Soundwave saying the title of the song throughout it. Judge for yourself (the song itself is one I’ve not heard before; it’s surprisingly like the Fresh Prince Nightmare on Elm Street tie-tie in from the following year).

Hercules finishes the second issue of his mini-series by following up on the dirty sex last week with his robot stealing a druggies stash whilst they’re sharing the same cell. This really isn’t aimed at the younger readers, but it’s still good fun. Herc also ditches his girlfriend after she turns out to be a lying skank, and as such ditches his black costume as well.

Oh, and Robo-Capers features what is blatantly one of the Giggly Sisters, years before their Combat Colin début.

Next week... well, I’m expecting it to be another long one as we hit The Marvel UK story.

But as one final note, Ryan F’s excellent blog on the comic has reached this story as well, meaning that we’ll be briefly in-step on Target: 2006 next week, but after that the lazy sod who insists on doing entire stories in one go will be ahead of me. A true passing the torch moment. But I ask you this ladies and gentlemen, what’s better: Quality or quantity?

Quality obviously, but there’s more than enough quantity coming from me in the build up to the 30th anniversary to make up for it. Including the 2013 Christmas Quiz, which will hopefully have some mildly crap prizes as well.


UPDATE: Ryan's blog is currently off-line as he works on the book version, meaning I win! BWAHAHAHAHA.

It will be a good book though. 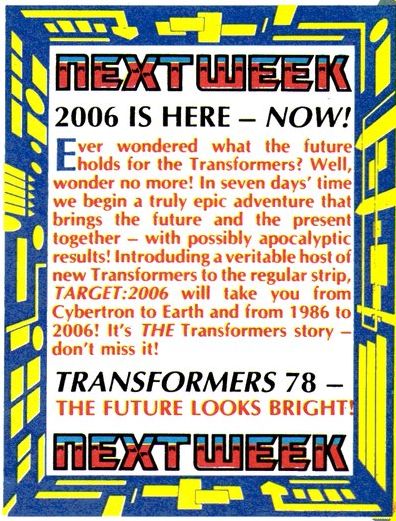