...Because You're Beautiful, And You'll Soon Be Long Gone. 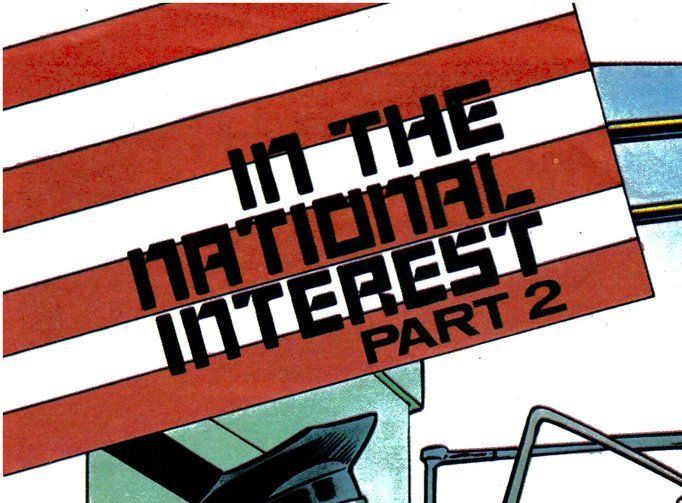 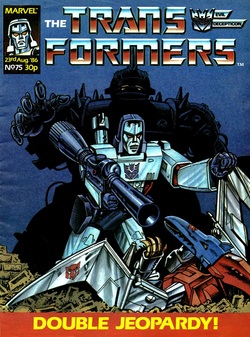 I'm not sure being the object of a robot's affections is all that flattering!

There’s been some exciting feedback this week, as the more attentive readers may have noticed I’m always careful to give the full name and location of any letter writer I specifically mention, mainly because I like to think it’ll be a nice nostalgia blast for anyone Googling themselves. This has worked for Matthew Krouwel who was very pleased to see his letter in issue 39 get mentioned. Apparently Soundwave sent him a Bumblebee, which is nice.

It’s probably lucky it wasn’t one of the kids I’ve mocked who found the site, I suspect after the best part of thirty years they no longer have the proportional strength of ten year old children.

Back in 1986, one thing that the extreme length of last week's entry prevented me from really talking about is the fact Will Simpson draws this entire four part story. This hasn't happened before with the 11 page UK stories, and no one else will get a straight run of this length whilst the current format endures. This shows that whilst Furman himself may not have been a fan of Simpson, editor Rimmer clearly had a huge amount of faith in him. Indeed, as he'll get both the conclusion of the big story of 1986 and the 100th issue, it's clear that, with the departure of Barry Kitson, Simpson has become the main go-to artist for the book. There's even what may well be an intentional passing the torch moment between the two artists later in this issue, which we'll come to later.

The issue opens with a flash-forward of a news crew reporting on two giant robots wrecking havoc down the main street of Portland. Obviously someone was worried that having Sludge panting over Joy wouldn't be the most exciting opening for young readers, but this simple one page sequence is the forerunner of what will quickly become a standard Furman writing technique to deal with doing everything the relatively short page count needs to achieve in order to encompass his increasingly complex plotting. Start in the middle of the action, and then have a character think back to how they got into this mess in the first place so the resolution to the previous cliff-hanger can be dealt with quickly.

It's a technique he'll develop, but it's extremely effective here, casting a looming shadow over the fairly light scene that follows. The rest of the issue is divided into three strands that all converge on Main Street in their hunt for Meadow's camera crew.

Dinobots: Master piss-takers.
The first is unsurprisingly the Dinobots, and there's some lovely art of Grimlock trying to explain the Transformers back-story whilst Slag and Snarl play in the sea and Sludge is resting with his face on his claw and the look of a love sick puppy on his face. What's especially nice about this sequence, other than sending up the solemn nature of the exposition, is how Joy doesn't reciprocate Sludge's feelings and finds the whole thing kind of creepy. Astoria she is not, and all the better for it. There's also a nice moment where she realises that Robot-Master is exactly the sort of scam the government would come up with.

Realising The Man will still be after her, they decide to send Swoop to go collect Joy's camera crew, which he pretty much goes along with just because he's bored, again a nice little moment that shows how differently the Dinobots think from the regular Autobots. There's also a fantastic little beat where Swoop has to stop himself calling Optimus Prime "Our leader".

The other two aspects of the plot are brought into it by the call Joy makes to her (seemingly blissfully unaware of what happened to their predecessors) crew being traced. These include Megatron, in his full on Budiansky petulant whiner mode, complete with tendency to refer to himself in the third person ("You dare to strike at Megatron?!"). As a result, he’s huge fun.

The Decepticon leader is desperate to find Robot Master so as not to lose face with Shockwave, and mistakenly thinks from her advert that Meadows must be in touch with him. So he, Soundwave and the Constructicons head off to intercept the TV crew.

The other, is of course Triple I and their new toy Centurion. This new robot really is an impressive piece of design, big and chunky and covered in Spikes he looks like serious business. He’s arguably more impressive than the plan to stick a clearly mentally distraught man like Morris in control of a twenty foot killing machine without even the most basic failsafe and not expecting anything to go wrong. It’s also not clear how III were able to so perfectly rebuild Morris’ machine but at the same time not understand it enough to just have one of their own people work it.

Slightly wonky logic aside, this brings all three groups together in Main Street about an hour and a half before the issue opened. Megatron draws first blood, jumping out of Mixmaster and throwing both poses and bad ass threats at the camera crew. Swoop then joins in, but Megatron makes very short work of him by introducing him to a building face first. 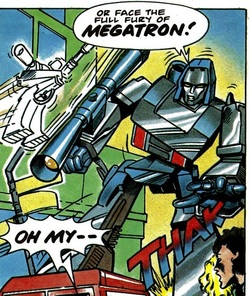 WHAT HAPPENED TO MY WAIST
Centurion then arrives in the most gloriously OTT manner possible, blasting up from under the ground. It’s not really clear or why or how- Even if there’s some sort of giant robot sized sewers down there you have to wonder at Triple I’s logic in having him start his mission to end the destruction caused by the robots by starting off with massive destruction, but it does look impressive.

In what may be the least surprising plot twist in all of Transformers fiction, Morris then looses what little grasp of reality he had and promptly has the red mist descend and start mercilessly beating the living crap out of Megatron regardless of the risk to human life. This involves them posing by a van with the name “Kitson” on the side, though there was something similar in the first Annual this is the first time such in-jokery (or “Easter Eggs” as we’d call them now) has made it into the weekly comic and is much subtler than many such similar jokes will be later on; you don’t see the name in full in one panel but have to work it out across two.

The various fights are probably the first place the art falls down a bit and starts to look a tad rushed- when he first appears in robot mode Megatron has an almost Jose Delbo pose where his upper chest looks like it’s going to fall off his legs. The colouring is also not quite up to the usual standards of the UK stories, in particular the choice to have the Kitson van be the same colour as the Constructicons seems needlessly confusing. There’s a sense that there’s a good reason the comic never had the same artist draw four issues in a row again.

Still, the cliff-hanger is a good one, with the two members of the TV crew realising Swoop was probably on their side, and they’re in big trouble as he’s still wearing a building hat. All in all, this issue ups the scale of the opening by adding some large scale action to the thriller aspects and, a couple of logic fudges aside, is a damn good read. 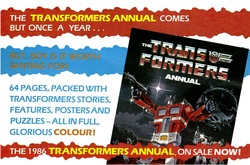 Like Santa, it comes only once a year.
The big thing with the rest of the issue is the début of our two new regular features. Well, one and a half technically as the first is just Robo-Capers made longer.  I’ve been fairly hard on this series for not being Combat Colin, but hopefully the added length will allow the full stream of consciousness bat-shit insanity that made Colin so enjoyable to take hold. Frankly, to be better than Matt and the Cat this opening half page celebrating the new format doesn’t need to try all that hard.

Grim Grams is, by a considerable margin, the best remembered and loved of all the letters pages. The first thing to strike me when looking at it is how insanely big the logo is, effectively we’re losing one letter a week. Dreadwind and Blaster will start off with similarly oversized mastheads before shrinking them down, but Grimlock is going to be stuck with this honking big image throughout his time on the book.

Obviously he’s dealing with Soundwave’s dregs for the first few weeks, and perhaps isn’t giving the most helpful answers to his first letter from Mark Proctor of Fareham (hi Mark if you’re reading).  I can understand fudging what Soundwave turned into on Cybertron (apparently the “Cybertronic equivalent of his Earthen form”... which would be what? If nothing else, that applies to pretty much every other Transformer), but what Straxus turned into should be an easy one but Grimlock just gives a joke about his alt mode being small pieces of burnt wreckage, a joke I think we’ll be seeing again in future letters pages.

There’s also fun to be had from his mockery of how cartoon Grimlock speaks, which will come back to bite him on the ass very soon.

Still, he already “Sounds” different to Soundwave, and we get what I believe is the first mention of Dumb Stubbies in the comic, the standard affectionate term for the creative team.

Hercules meanwhile gets a girlfriend as the hostage he rescues isn’t wanted by anyone else, and his robot sidekick is forced to have a marginally rubbish new hand to replace one lost in action. Herc also acquires a new all black costume, I wonder if the very casual way this is done (basically to make his new love interest all moist) is a deliberate piss-take of the endless anguish Spider-Man’s black duds caused him?

There’s also the first advert for this year’s Annual, in shops now! Though as with the 1985 book I’m going to be a good boy and wait till Christmas day ’86 before I open mine.

Next week, Swoop has the hangover from hell and Megatron tries to beat Centurion in the “Popping up from unlikely places” stakes. 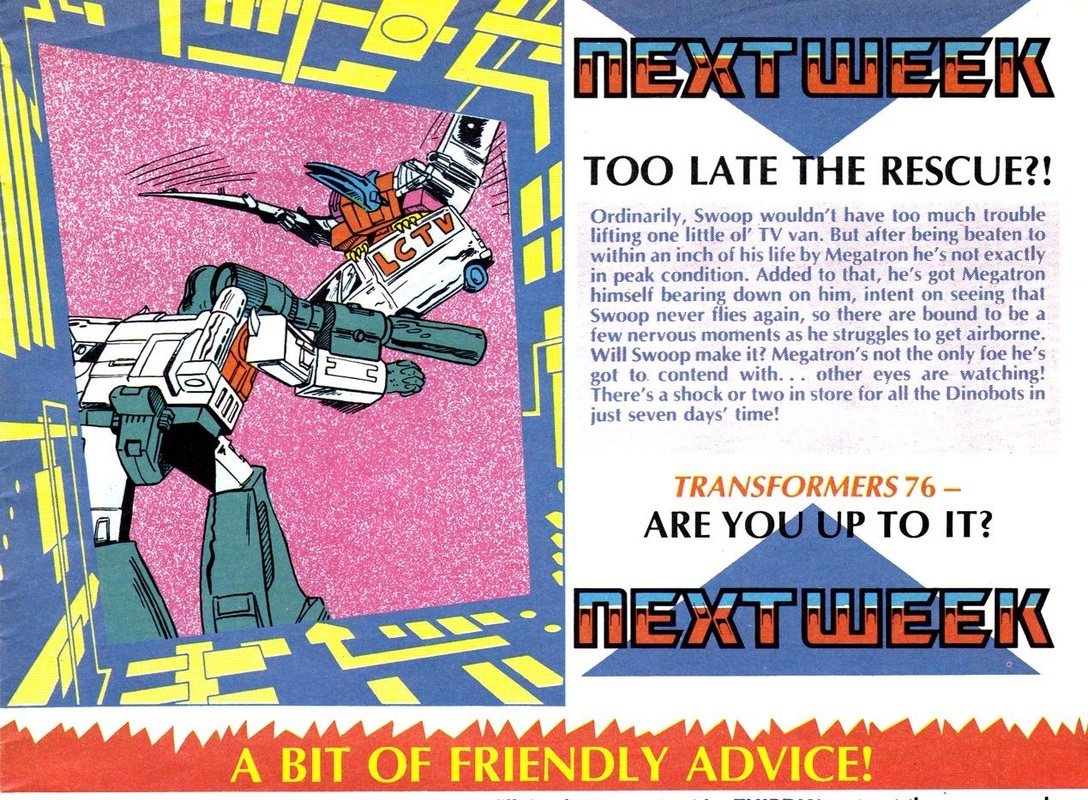