OOOOOPS Inside Your Head. 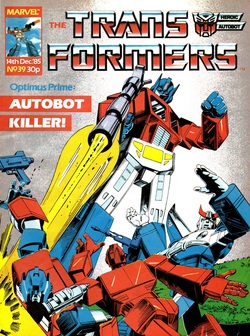 
You will be dropped in the swamp, Optimus Prime, where you will sink into oblivion, only aware of the corrosion that slowly consumes your circuitry until you are no more.


That's a fantastic cover isn't it? Easily the best American reuse to date and in a completely different league to last weeks mis-coloured mishmash. The sight of EVIL Optimus Prime blasting his own troops is bound to have every kid in the land eager to find out what happens within the comic.

Of course, there's always the risk with a good strong cover that the contents will disappoint. Or even that the cover is an outright lie about the contents. However, despite there being some misdirection about what's really going on it is a strong indication of what can be found within.

But before we reach OPTIMUS PRIME: AUTOBOT KILLER! we get BUSTER WITWICKY: EXPOSITION FLYBOY!.

With this two parter being the grand final of an extremely long running story, Budiansky tries his best to keep all readers up to speed on events so far. Therefore we get Buster, as he flies in Jetfire to the Blackrock plant, reminiscing about the salient plot points so far.

Unfortunately this does so up the amount of padding across the arc, Circuit Breaker and Soundwave's message home (and poor old Bomber Bill) go without mention because they're completely irrelevant to the main matter at hand of Prime's head. 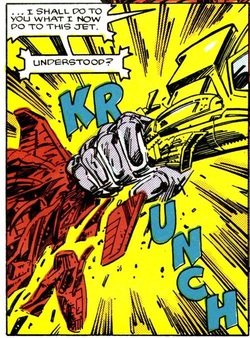 Blimey.
We then get a slightly odd bit of plot trickery when, for the first and only time some USAF jets attack a Transformer just flying from one place to another. Whilst this should happen more often (unauthorised military craft zipping about are likely to get some attention) here it's just a device, when Jetfire does some fancy high speed manoeuvres to take out the jets Buster is knocked out by G force. Neatly ensuring he can't use his magic Matrix powers until the dramatically right moment.

It's contrived, but all Action Force fans will be pleased to see the air-force pilots eject safely before their craft explode.

At the plant, Shockwave is ably demonstrating he's made of 100% bad ass awesome. With Buster in his clutches he takes some time out to scare the living daylights out of Rumble for the whole "Can't see humans" thing. Which, logically, isn't his fault of course but who associates Shockwave with logic?

Rumble is put in charge of guarding the human factory workers, and in order to demonstrate what will happen to him if he fails... Shockwave rips apart one of the newly built lifeless Decepticon jets (all based on the Coneheads, I wonder if Bob had some vague idea of introducing them as newly built on Earth as with the rest of the pre-Space Bridge characters we'll be seeing?). With one hand. Bloody hell.

It's understandable this leaves Rumble literally sweating oil, and we'll get a decent pay off on this next week. 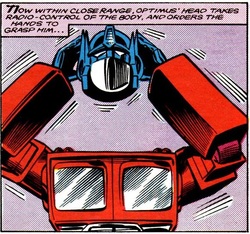 He's Back! Or is he?
This is a good place to talk about Herb Trimpe's art, which is good solid stuff that tells the story well with a few nice flourishes here and there like the sheer look of blind panic on Rumble's face.

Shockwave also smart enough to have worked out the Autobots must have a bug on the plant as there's no other way they could have known to send Bumblebee and Bluestreak after the boy (it's worth noting he never finds out Ratchet also saw Prime, presumably the medic is also too small for Rumble to see). So he puts a fiendish plan into play.

It's fair to say the astute reader will know where this is going when Prowl's Autobots outside the plant pick up a conversation in which Shockwave orders Prime's head dropped in a swamp. If nothing else, the cover gives a big clue.

The sequence of Jetfire dropping the "head" and the Autobots forming a daisy chain to retrieve it are played to the hilt as if this were a fully triumphant moment. Meaning that even with our foreknowledge it still winds up being surprisingly effective when the Head On Optimus doesn't greet his troops, but instead blasts the hell out of them.

This leads to yet another great faux cliffhanger as Soundwave leads a force of Decepticons out and smugly declares Prime is now their bitch. Even with it being a slightly cramped panel on which to end an issue it makes for a memorable To Be Continued.

With the current storyline winding up, Transformation looks to the future and- as well as emphasising what a long-running plot this has been (as does the next issue box, someone is definitely eager for fresh pastures)- with a round up of forthcoming stories. Going through the next batch of UK stories into the two subsequent American tales it manages to make Shooting Star seem intriguing. Which is hilarious for so many reasons it's hard to know where to start.

Matt and the Cat is once again fills a full page with what's blatantly two strips stuck together, if anyone's been paying enough attention to care it's probably skipped a prior issue at some point again. Myself, I'm just counting down the issues till it leaves the comic.

Soundwaves gives us our first ever cartoon nitpicker as Matthew Krouwel from Birmingham points out Soundwave briefly has an Autobot badge during More Than Meets The Eye. You can guess the response. Soundwave also gets a great gag thanks to Eliana Fu from Wembley, who asks about female Transformers only to be told they'd "Just get in the way". The sort of thing you can only get away with when the person answering the letters is supposed to be a bastard.

The highlight though is another bit of fun with the format as Steve Tanner from Llantwit Major so outrages Soundwave by calling him imaginary he storms off and one of his human helpers has to finish the answer (using the different coloured text Hi-Test would later employ). It's clear by this point Furman is having a whale of a time with the page and the fun is infectious.

The helper also confirms the original Iron Man will be dead by 2020, so best get a move on Marvel.

Speaking of 2020, the other shoe finally drops for Machine Man about where his girlfriend, and, more pissed off than ever he sets off for what will hopefully be an epic final act of this story.

And speaking of epic finals.... Yes, next week, the storyline that's been running since the end of issue 8 reaches its pay off. It's going to be a big'un.

As a final piece of housekeeping, those of you following this blog may be interested in another project I'm helping out with (as part of a collective of writers, it's not just going to be my endless whitterings) over at TFArchive in which we've started the countdown to Transformers 30th anniversary next year with an ongoing series of analytical articles looking at all aspects of the franchise. The first one is up NOW. 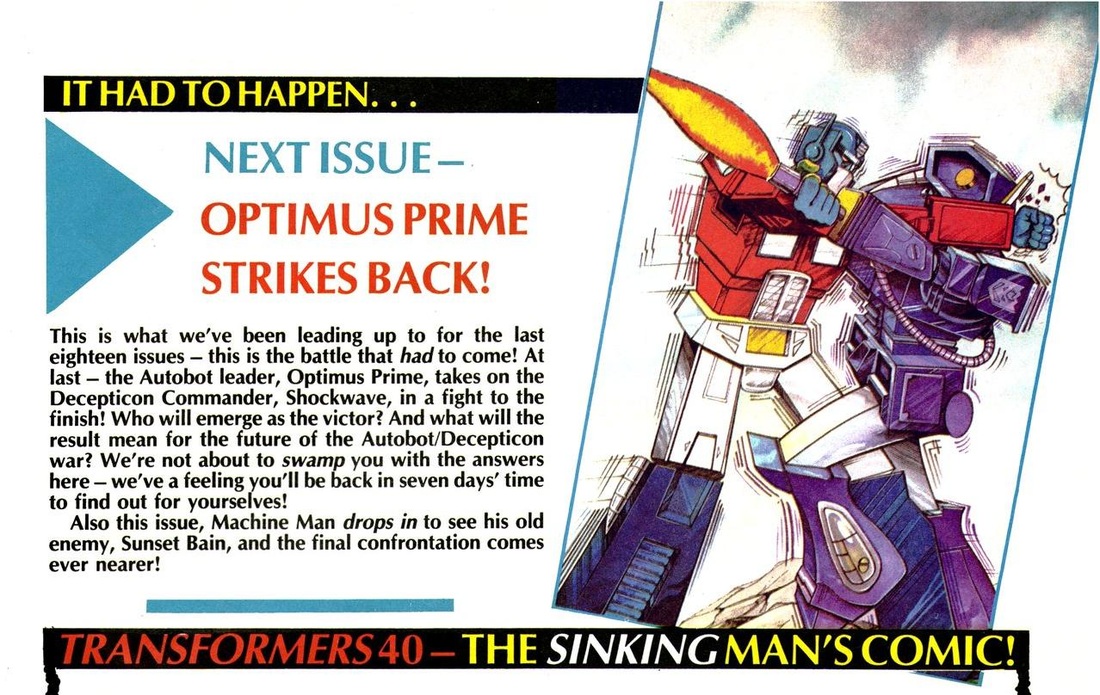