Skyfall Is Where We Start. 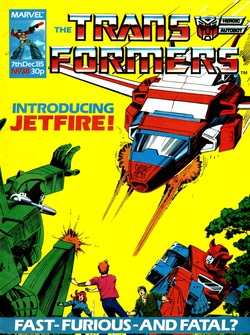 
You know me son--I've never been the interferin' father type--at least not for the last minute or two!


Transformers was a line that started as a second hand collection of toys, re-purposed from earlier, generally much less successful ranges. Mostly from Takara of course, but as the franchise took off in a big way and demand outstripped supply Hasbro would quickly do deals with other companies to press any and all transforming robot toys they could get their hands on.

Even at this early stage Hasbro clearly wanted more product than Takara could supply, with Shockwave being the first, but Jetfire tends to be better known for it. Partly because his original use as the Macross Valkyrie is one of the most famous toys of its type. Not least because of its use in Robotech.

The other reason for Jetfire's bastard child status being well discussed is he's the victim of murky legal changes. Of his fellow non-Takara toys that made it into American fiction; the aforementioned Shockwave and Omega Supreme; he's the only one to have his design significantly altered. For the cartoon his name would even be mucked about with. And his appearances were generally of the "We can't really ignore this large toy, but lets get him in and out as quick as we can" variety, with him being reduced to a background extra in both comic and cartoon with almost indecent haste.

The exact reasons for this are a bit vague (even the wiki fails to come up with a firm answer), but the upshot is, if you're a mad Jetfire fan the three issue run starting here is pretty much the only place the American stories will give you your jollies. The UK will be less biased towards him- as it will with most of these imported toys- but as far as Budiansky goes this is pretty much the flying Autobot's lot.

What's impressive about this though is that even with Jetfire being a mindless drone here he's still handled better than Devastator was two weeks ago. Mainly because he's better integrated into the ongoing plots, being a catalyst for their conclusion rather than a case of "Oh, here's a combiner guy doing some stuff". 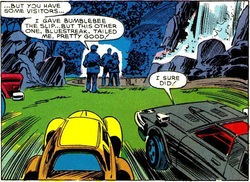 "I only like fat men to watch".
The issue opens with what is supposed to be a comedy scene with Buster, but what actually takes on sinister implications when read in light of much later events.

He uses the power of the Matrix to break Jessie's bike chain so they can stop in order for him to "apologise" to her. By giving her tonsils a thorough examination. On the face of it a bit of typical silly teen behaviour.

But, we'll learn later the Matrix is corrupted by being used for less than pure reasons. Buster's desire for tongue tennis is the start of the road that will lead to the possessed Thunderwing using EVIL Matrix eye blasts to blow up Autobots. Was it worth getting something for the wank bank Buster?

On the other hand, Buster has clearly become slightly less hormonal since he enjoyed having O watch him and Jessie make out in the first issue, as he's upset when his father and then the two Autobots turn up.

The scenes here between Buster and Sparkplug are probably the best we'll see in the series. Sparkplug is reasonable and sensible as he tries to get his son to open up and Buster's reluctance to admit he's not really a mechanical genius as he Dad wants is well played. Throughout they get excellent support from the quips of Bumblebee and Bluestreak. 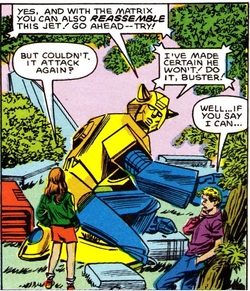 "Now, try and give your girlfriend sensible clothes".
The arrival of Jetfire (not alive but programmed for simple instructions by yet another eye blast from Shockwave) gives us this weeks big action scene. The attempts to make Jetfire seem awesome don't quite work- the full blast of his guns slightly damages Bumblebee's leg- but the Autobots shock and awe at his invulnerability to pain does again emphasise the difference between them and “Normal” machines (well, it would if Jazz hadn't revealed he can turn off his pain two weeks ago. But we'll ignore that).

The money shot though is a full page spread of Buster “Using the force” to disassemble Jetfire. Holy cow. He then puts him together again, ready for Bumblebee's cunning plan.

Sadly after the strong build up, the issue ends oddly. First we get a bizarre comedy scene of Hound leading a convoy of Autobots past the army blockade of Blackrock's plant, with the watching soldiers doing nothing but making a joke at the one who thought the Jeep didn't have a driver. This is, lest we forget, after the authorities have learnt the robots can become vehicles so you'd think they'd be a bit quicker on the uptake.

We then get into full white hole territory, as the cliffhanger once again sees Shockwave giving Optimus' head the exact same speech we've heard too many times now. Yeah, Prime will die without the Matrix. Just do it already.

Otherwise though, things are nicely placed for the two part final, with all the players in place for an action packed smack down. 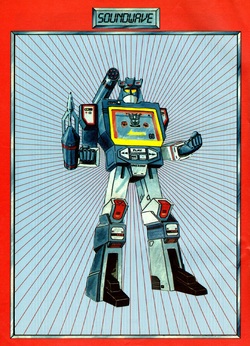 Calender Soundwave.
Now, I've mocked Nel Yomtov's colours several times over this series. But the cover to this issue really, really takes the biscuit. There's only three, large, Transformers on it and two of them are miscoloured. Yes, it's easy to mistake Bumblebee for Cliffjumper, and with his shoulder cannon you can see why he might have thought Bluestreak was Hound (though him being entirely block coloured green when he's right at the front of the cover is less forgiveable) but come on, someone, somewhere in the process should have noticed and told him to do it right. It's the perfect representation of the half arsed approach to colouring the American stories will take right up to the bitter end.

And is it me, or is that O rather than Sparkplug?

Elsewhere, Transformation returns to normal, with a few jokey references to Soundwave's take-over last week. You also have the chance to win a book based on Santa Claus: The Movie. Swoon.

Machine Man gets a great fight scene with the new Iron Man, and just about manages to save Sanctuary. Surprisingly gritty for a Marvel book, several of the background Wreckers die by falling from a great height. All of which leaves Machine Man as mad as hell and ready not to take any more.

Back where he belongs, Soundwave deals with the first question about where Transformers and the Matrix come from and Geraint Searle (another great name) from Worcester reveals they've given up on the Beano and Dandy for Transformers. Wise boy (or possibly girl).

Next week, one of the greatest covers in the run. Will “Optimus Prime: Autobot Killer!” deliver on its promise?