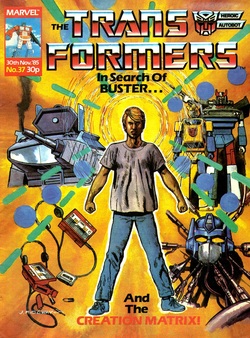 
However, you, Optimus Prime... Your productivity was zero when last tested.


Brainstorm! Hey? No doubt a lazy writer would make some jokes about expecting an appearance by the sometimes briefcase carrying 1987 guy who turns into a helicopter but once forgot he turned into a helicopter and agreed with a green man who told him he couldn't fly.

Luckily, I am a writer of great subtlety and depth and would never be so obvious. You might also expect an author of limited imagination to make great play out of this week's comedy human, Mozzarella Mike: the wacky pizza delivery guy. Perhaps by using a quote from a comedy Italian song. But again I raise above it.

Joking aside, Mozzarella Mike is actually a strong sign of how much more focused and serious things are going to be in this, the closing month of the arc. When he first shows up to deliver pizza to Shockwave's slave army it feels like we're in for another Bomber Bill, with wacky jokes from the soldiers about the quality of his cooking.

But this is misleading, Mozzarella Mike barely displays any personality, only being in the book for the dual reason of both dealing with the logistical issue of how the slaves are eating and to deliver Laserbeak in tape mode with a message from Shockwave ordering the soldiers back further from the plant lest his hostages be killed.

This done, Mozzarella Mike exits stage left never to be seen again. Self aware enough to realise this is not the time for comic relief humans with alliterative names.

The world's greatest detective.
In the plant itself, Shockwave is once again lording it up over Optimus, increasingly pissed at not being able to use the Matrix to give Jetfire life. This increasingly tired sequence is given a shot of fresh life by some impressive visuals, most memorably by shooting Matrix power out of his eye to try and activate Jetfire. Yowser.

Finally it occurs to the eminently logical one that Prime might not actually have the Matrix in his noggin anymore. Leading to one of the most widely derided sequences of the entire Marvel run.

Having deduced someone must have gotten into the Ark and taken the Matrix from Prime, Shockwave decides to rummage through Rumble's memories of being on guard outside and see if there was anything he missed.

By doing so, we learn two things. First, that Rumble sees in Commodore 64 vision. Second, that humans are too small for him to see, and the only way for Buster to show up on the recording is for Shockwave to use SCIENCE to enhance it.

Now this is deeply stupid on several levels. Other Transformers, including Prowl in this very issue, clearly have no problem seeing humans. And Rumble is closer to being human sized than most. If his vision really is that bad, the poor bugger must be constantly walking into Frenzy. It's utterly ludicrous, and not helped by the equally human sized Laserbeak recognising Buster. So he can see fleshlings but a fellow cassette can't?

The whole thing is made even dafter by the fact there was little need for any of this, Buster was clearly out of Rumble's line of sight back in issue 23 so there's no need to explain why he wasn't seen, and finding him out here could have been as simple as checking the Ark's security camera footage (which Shockwave could have taken with him before the Autobots reclaimed it).

The revelation of Buster puts Prime's head into a bit of sulk as he realises the implications, but it's hard to have much sympathy as it should have been obvious to him this would happen sooner or later from the moment he transferred the Matrix. Either he was prepared to accept the risk to Buster by doing it without his knowledge or not. Going all emo about it won't help.

Luckily over in the Ark Prowl and Blackrock are listening in, and everyone's favourite strategist has a plan. Send Bumblebee (as Buster's friend) and Bluestreak (as a guy who hasn't done much to date) to warn Buster and bring him back to the Ark. 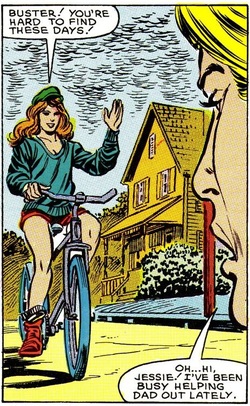 Some should do this as a cosplay next Auto Assembly.
Bluestreak never got much to do in the comic, with even his leadership moment in the last issue being ruined by being coloured as Prowl. With this rare chance to talk in his proper colours he seizes it in a lovely little sequence of him really annoying Bumblebee with his chatter as they drive off.

Though this is only half a US issue, it does nicely work on its own merits by ending up with Buster bookends. We open with him feeling worried and depressed about his powers and his Dad's mistaken belief that he's now interested in mechanics, and ends with Jessie (now ginger and wearing an outfit that makes her not only the most 80's thing in Transformers but also the most 80's thing ever) turn up and ask if he wants to go for a ride. Which cheers him up no end.

Bumblebee and Bluestreak just miss him and when Sparkplug- in a nice bit of consistent characterisation with Jazz trying to kill him- refuses to heed Bee's vague warnings and tells the little yellow chappy to sod off. Luckily Bluestreak has been so unmemorable up till now he's able to easily follow Sparkplug when he drives off to warn Buster than someone might be about to start firing flame throwers at him again.

The upward swing from the dark days of Circuit Breaker continues with this issue, Rumble silliness and the overdone nature of the Prime/Shockwave scenes aside. There's a genuine sense of desperation to Prime's situation and Buster continues to be surprisingly well written for a kid identification figure in Transformers. Bluestreak doing stuff just adds an extra cherry to the cake as we hurtle towards the end of 1985 and this storyline.

I wonder how coincidental it is that the Jetfire's In the Sky! gag in the NEXT box is almost the same as the title of the cartoon episode that introduced him (under his alternate name of Skyfire, more next week in the unlikely event you don't know all about that)? Both are playing on the same phrase, but we do know thanks to James Roberts' research the UK team were watching a fair bit of the cartoon at this point for inspiration (and more on that at the start of 1986).

Buy it now kids.
For this week only, apparently because the humans who normally do these things are off Christmas shopping, Soundwave takes over the Transformation page as well as his own domain. This mainly consists of him slagging off Machine Man, but the sidebar is also notable for having the first, honest to goodness pimping of the Annual. A long time coming, it sees Soundwave declare ...And There Shall Come, A Leader! Autobot propaganda. As the only other mentions of the hardback have been on the letters page this means all the PR work for it has been done by Soundwave. Clearly they're not paying him enough.

Though he may well be colour blind as the faint yellow he picks for the text on the main part of the page makes it almost unreadable.

On Soundwaves proper I was surprised to see a letter from my home town of Kidderminster, almost certainly sent in by (or rather by his parents on behalf of...) one Simon Taylor, someone I went to school with who was a year so so above me. It's a small world.

Machine Man 2020 struggles for the first real time as things slow down so Gears Garvin can explain the last thirty years of history. There's a chance for things to pick up again next week though as the issue ends with Iron Man 2020 launching an attack on the Wreckers base.

Next week, the first full bodied- if not full minded- appearance of that character who laughs in the face of convoluted copyright: Jetfire. He may be mute at this point, but Bluestreak will talk enough for the two of them. 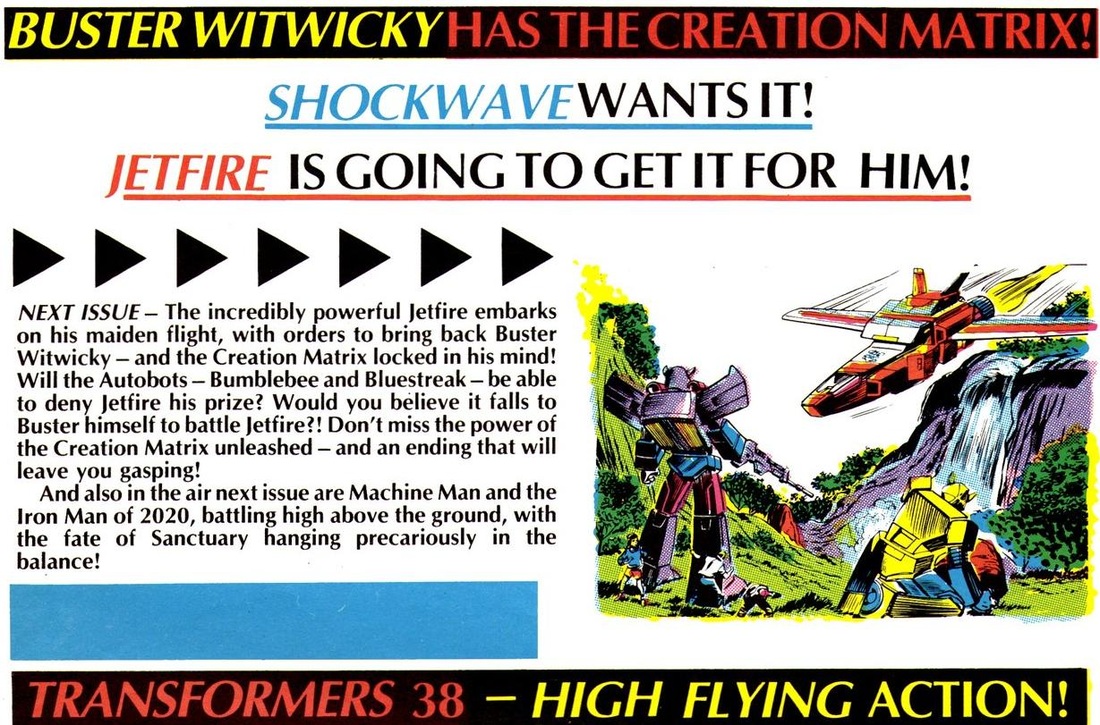