Head Over Heels, Setting the Pace. 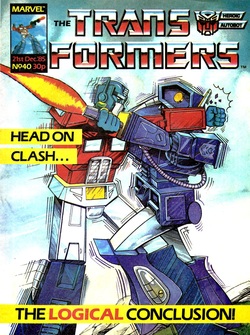 OK then, here we are, the big epic final climax we've been building up to since the American stories first resumed. Indeed, it's somewhat rare amongst the U.S. tales in that we get a firmly closed off ending, there's no dangling threads or ongoing sub-plots to be carried onto the next issue. This is effectively the sort of big end of season final we'll rarely see Uncle Bob get a chance to do.

What's surprising after some of the diversions previous issues have given us (with even the first half having its odd aerial dogfight) is how focused these 11 pages are. Everything flows neatly from plot point to plot point in one direction, with the humorous scenes coming naturally from the situation rather than via wacky sideshow humans.

The plot is split neatly into two halves, one dealing with events at the swamp, the other giving us our last glimpse (in the colour era anyway) inside Blackrock's plant.

The former sees the Autobots being completely overwhelmed. It's a nice touch that it's not just the faux Optimus beating them down but a sizeable Decepticon force. It would be far too easy for them to be portrayed as useless in the face of Prime's seeming betrayal but instead Prowl's boys go down fighting.

This means we get what would be a fantastic large panel of Prowl valiantly trying to hold his ground in front of his falling troops, if not for Yomtov colouring everyone except Prowl an unexciting shade of red.

There's an argument that block colouring is a lost art and when used properly it ensures the eye is drawn (ah-ha!) to the important, colourful part of the page. Whilst this may well be the case, you'd be hard pressed to prove it using Nel's "Which crayon isn't broken today?" system, which once again undoes the valiant efforts of the artist.

I know I berate Yomtov a lot, but I'll stop when he stops being so half-arsed.

I know, I'm just annoyed we'll never know if it was Laserbeak or Buzzsaw who twatted Gears. 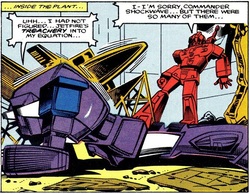 Not Rumble's week.
Over at the plant Shockwave is once again living it large over over Prime's head as Buster wakes up from his plot contrivance nap. Which luckily coincides with Jetfire returning. With a strange big silly grin on his face despite the fact he's supposed to have no personality at this point. Maybe he's just gormless?

However, his return does mean Buster gets to unleash his Matrix Mojo and control the mindless robot so that he beats the living tar out of Shockwave.

As Jetfire flies off with Prime's real head, Rumble suddenly realises he's alone and surrounded by angry humans almost his own size. And which he presumably can't see. The sequence where he pathetically begs the groggy Shockwave for forgiveness after the workers have all escaped is brilliant black comedy.

The vein of dark humour continues as the two halves of the plot crossover with the arrival of Prime's real head at the swamp. There's a delicious irony to the fact that, after such a fuss was made of the fake head last week, here the proper reunification goes unnoticed by everyone present due to the fighting. We then get a fantastically silly sequence where Prime cheerfully goes up to the unawares Soundwave, who mocks his "Puppet" before getting walloped.

And God knows what the people determined to find something homoerotic in every single bit of More Than Meets the Eye would make of Prime telling Soundwave "I WANT YOU!".

The fact the Decepticons are caught out by their seeming servant also avoids the other Autobots looking completely useless when Prime hands out a giant can of whop ass. He's just got an advantage they don't rather than them being incapable. 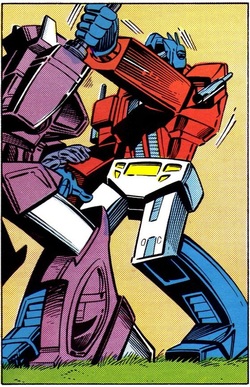 The closets we get to a modern style fight panel.
Then we come to the scene bigged up by issue 39's Next Week box, this weeks cover and the Transformation page. Though the later sounds decidedly lukewarm on the subject, describing it as potentially "Predictable". Yes, it's the long awaited first ever fight between Optimus and the current Decepticon leader.

On the surface it might seem disappointing, the fight barely lasts two pages and is generally made up of small panels. Certainly in more modern Transformers comics (at least before the last year where Barber and Roberts have seen characters consistently talk in paragraphs once more rather than cool sound-bites) this would have taken up the majority of the issue. We'd have lots of splash pages with little dialogue and lots of cool quipping and dramatic posing.

As a child I'd have preferred the latter, and likely would have found the small scale visuals disappointing. But young me would have been a tit, because as an adult I can appreciate how Budiansky puts the fight first and foremost at the service of the story and doesn't waste any space. If it were larger or longer we'd loose lovely little moments like Rumble's failure and that would be a great shame.

There is a slight stumble after the fight ends with Prime throwing Shockwave into the swamp as we get the only real moment in the whole arc where the Autobots look useless without their leader.

Because rescuing Buster from whatever horrible things may be happening to him is his priority Prime rushes off to help him (albeit walking rather than driving) as soon as Shockwave is sinking in the swamp rather than taking the time to kill him.

This not only confuses the other Autobots far more than it should, they then just stand there watching Shockwave sink rather than finishing him off themselves. The lazy sods.

If you break your toys: You suck.
Interestingly though, for those who thought movie Prime killing a defeated Megatron in Dark of the Moon was badly out of character for any version of Optimus, the only reason the same doesn't happen here is that need to get to Buster. Not only does everyone present not have a problem with killing a vanquished foe, they're disappointed when it doesn't happen. The more things change...

Luckily, nothing bad is happening to Buster as the factory workers can free him. Meaning Prime can give his Jerry Springer thought for the day (without being shot by Shockwave this time and with some panels of art that will inspire other artists, one most obviously being copied for the changed ending of The Last Stand in The Complete Works Volume 2) and we get a happy upbeat ending. Hurrah!

Despite some wobbles, this has been an extremely satisfying storyline that has seen Uncle Bob at his very best. This is pure speculation but I do wonder if he was expecting to leave the book at this point. He never considered it a long term job anyway, and pretty much everything he started is neatly wrapped up as if ready for a new writer. His next couple of stories are going to be much poorer, reeking of "Bloody hell, am I still here?", and it won't be until the middle of 1986 we get his next really well regarded run with the Return to Cybertron arc.

It almost seems this is the point his skill at developing characters and back-story becomes a rod for Bob's back that sees him stuck to the franchise for years longer than he'd have liked. We'll get some great stuff off him in the future, but never with such consistency over a long run.

Elsewhere, the pompous smug "Humans suck" attitude that so annoyed me about early Machine Man is actually called out on the 2020 version where, after MM berates the needless deaths of some of Bain's guards, Gears Garvin tells him not to be so up himself and that this is war. About time. The scene is then set for another bout between Machine Man and the new Iron Man.

With the season nearly upon up, Transformation has a Q&A with Hasbro that is the first place we get a formal acknowledgement there are toys that aren't available in the UK. With a warning kids shouldn't be buying those evil grey Shockwave's as they're not official Hasbro product. Kids are also told that if they break any of their Transformer toys it's because they're clumsy fuckers and shouldn't come moaning about it. Anyone who's seen how fragile some of the Diaclone stuff is (it's genuinely hard to see how something like the original Megatron was ever sold to children) will find this hilarious.

The toys also get a plug on Soundwaves thanks to a helpful reader asking why Jetfire is being sold as an Autobot. We also get find out Soundwave got the job on the letters page because he has blackmail information on the editor.

Next week kicks off a ten issue run of British stories that will build up to the half century; introduce some new writers and give us the first real instance of that Marvel staple: The self-doubting Optimus (oddly enough not from Furman).

But first we've got to survive Christmas. Ho, and indeed Ho.

Also at some point between 41 and 42 (ideally I'll put three entries up on the same day, but realistically they're more likely to be spaced out over the week) I will also be covering the behemoth that is the first Annual and the 1985 Collected Comics. Tis the season to be jolly. 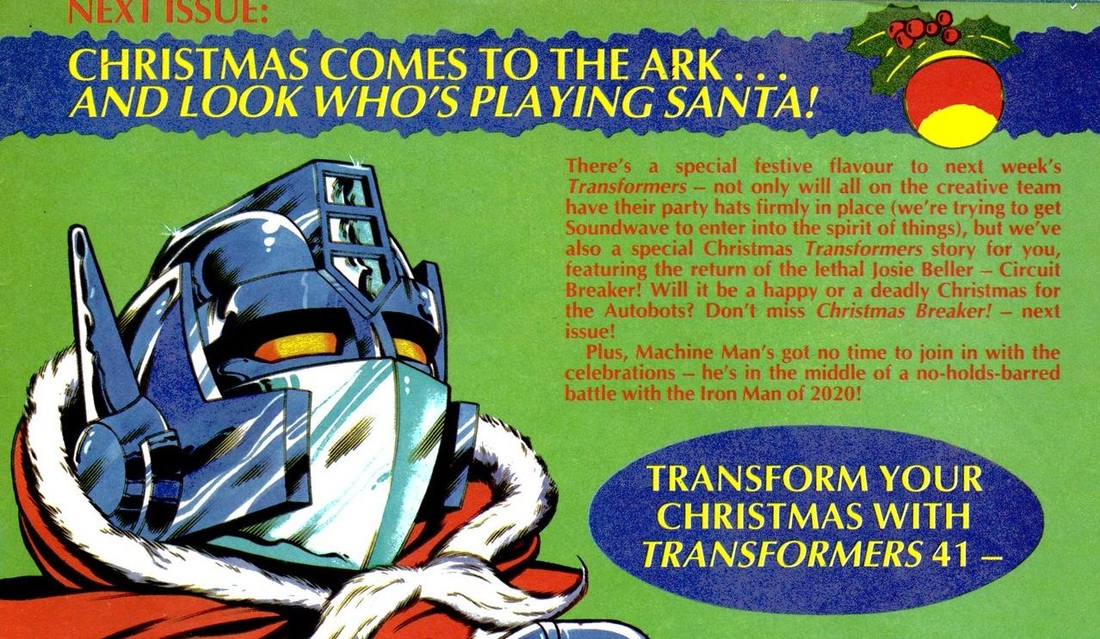