What Will Your Daddy Do When He Sees Your Mama Kissing Santa Clause? 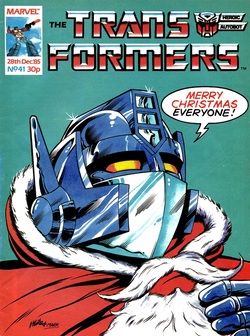 
Christmas must be really special here on Earth if it can do this!


Here we are then, the end of the comic's first full year. 1985 has seen the book develop and find its identity at a rate of knots. Just compare the cover of issue 8 back in January to the one on the left, they look like they're from different decades rather than tail ends of the same year. This is a title that now knows exactly what it's doing and that will lead to great things in 1986.

None of that is really relevant this week though. Because it's Christmas! The week of the year you can guarantee none of the kids reading are going to be that interested in their regular fix of robot action. There's too many distractions.

So the purpose of this issue, and every subsequent Christmas issue with a British story in it, is to be fluff. Something light and throwaway that will entertain those that are paying attention but not be missed by those who aren't.

That irrelevance might explain one interesting curio, of the five Christmas issues, only the last two will be written by Furman. There's a sense he's little interest in fluff at this stage and will be happy for others to deal with it even as his own presence on the rest of the UK stories becomes ubiquitous.

This story is by two other writers, Mike Collins and James Hill. Though only Hill is credited due to this and the next story being commissioned as a four issue block from the two of them with the writing credit alternating.

So this week, just to focus on the man with his name on the page, we get our first ever fanboy writer. Hill had read the American issues as they'd first been released and enjoyed them, and as a result had great fun with his work on the first Annual (written before this but we'll cover that in the next entry). Being a fan of the series in general rather than just a writer for hire will see him produce one of the single most important of all the Marvel stories in the second Annual, and all his work will tend to be rooted in the history and continuity of the Universe.

This story won't show these tendencies at their best- mainly consisting of characters recapping elements of the series so far as blatant padding- but this mild example is the first step on the road to James Roberts. 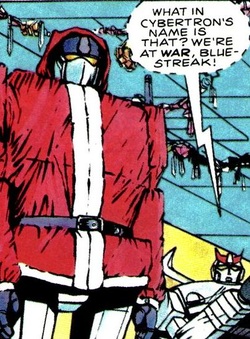 You tell it how it is Prowl.
The story itself is slight, and best remembered for two things. The first, and silliest, is that promised by the cover. Optimus Prime in a Santa costume. He's dressed up and decorated the Ark as a thank you to Buster for all his recent help (the British stories will generally portray Buster's relationship with the Autobots as being more like Spike in the cartoon with him hanging out with them when he has no good reason).

It's a painful sequence that's a bit too on the nose, but made interesting by some set up for Crisis of Command! as Prowl starts sowing the seeds of dissent over their leaders current odd behaviour. Him bitching to Bluestreak is the highlight of the issue. Though him wondering what could be upsetting their leader is inadvertently hilarious. Hey Prowl, remember anything that happened this year?

The other has to do with Circuit Breaker, in her only UK appearance, presumably for the sake of the punning title. Hanging around St Petersburg (in Oregon, not Russia) she saves a small child from drowning... By using her electricity. Can you spot the flaw there dear reader? Because I think everyone except the writers over the age of three did.

Beller's whining and moaning about her hard life is fairly standard for her (though after her constant mistaking of the Autobots for evil it's nice to see her get some of the same treatment from the town folk), but what's got me curious is how she's surviving without anything more than a trench-coat to her name? Where is she living? How is she eating? What way of making money could a virtually naked woman in a coat and hat find in the back streets of a small town late at night? Oh my.

The rest of the issue is fairly light, CB runs into Jazz and Buster making a Christmas present run, misunderstands the situation and a fight starts. Luckily the combination of a Captain Kirk speech from Buster and the bells ringing midnight on Christmas day sees a seasonal change of heart in our scantily clad lady and she flies off.

Tired and emotional.
Being too harsh on this story is almost unfair as it was never intended to be read by an adult in February. Considering what it needed to do, it does it OK. But this is still the weakest of all the Christmas stories. The curse of Circuit Breaker strikes again.

The most striking thing is Will Simpson's first interior art. It's wildly uneven, with Beller looking... Well more like someone who's recently been electrocuted by giant robots and is walking near naked through the snow. Which is at least more realistic than her usual sex kitten look, but also shows humans aren't really his main strength.

On the other hand, Circuit Breaker's nightmare vision of what must have happened at the Blackrock plant-complete with Soundwave menacing workers with his big gaping mouth and drill fingers-is fantastic.

The issue itself is most famous for its one off Ratchet hosted letters page, Rat-Chat. It's a good gag for a one off (as is the reveal Soundwave has taken the week off due to getting tired and emotional at the Christmas party) but does show that a "nice" Autobot wouldn't really work answering letters full time. Sadly a lesson they'd forget come Blaster. Points to Gavin Bollan from Bridgewater for getting a STD gag past the radar.

Machine Man is now hurtling towards his final instalment, and gets a fantastic knock down fight with the new Iron Man that wrecks half his head but leaves him victorious and ready to deal with Bain.

The next issue will see 1986 kick off with a bang as the artist on the book arrives and the visuals will never be the same again.

But first, and hopefully going up over the course of the week, we have the Annual and specials to cover.

And a very merry Christmas to those of you at home.