You Might Never Get Rich, But It's Better Than Diggin' A Ditch. 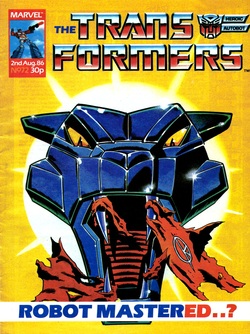 
This week's instalment has the distinction of lending its title to that of the Titan trade that would reprint it nearly two decades later. Considering that collection also included the story that killed Optimus Prime (and Afterdeath would be a nicely ironic title for a series of reprints of a long cancelled series) that creates the impression this must be a vitally important extremely well remembered issue. Right up there with the Return to Cybertron stuff in terms of iconicness.

It's fair to say this is not the case, though it's certainly well remembered for one particular scene we'll come to shortly it's a somewhat strange issue to make the centrepiece of a trade paperback. You'd almost think Furman, acting as editor on the Titan range, just picked it for the title because he thought it sounded cool rather than putting any extra thought into it. Surely not?

The story itself sees Bob returning to more familiar territory after six weeks of majestically avoiding it. The net result is not unlike that of a smoker who has managed a month off the fags cracking and shoving ten in their mouth at once. Yes, after minimal humans and culture clash comedy Budiansky is firmly back off the wagon and produces a story filled to the brim with both. If that's not your thing this is not going to be the story for you.

There's little indication of what's to come in the opening as Ravage chases the fleeing Robot Master across Wyoming. There's a nice air of tension about this sequence, and the description of the melted and burnt flesh Ravage expects to find when he thinks he's fried the human (his sense of smell has been tricked by Donny having burnt his costume on a convenient campfire. Don't worry, he steals some civvies, this isn't a nudist issue) is surprisingly grisly for what's going to turn into a rather light and tale.

After Circuit Breaker, something for the ladies.
There's also time for what is easily the closest thing to a subtle gag in the entire story, where the fleeing Donny, desperate to get to the Autobots, passes right by the crashed Skids, dismissing the "Van"- the idea of compact cars being as alien as giant robots to Americans in the '80's- as junk.

But, other than a brief glimpse of him overhearing Jake, our old lilac-Sideswipe driving friend from last issue, talking about a van with a mind of its own, that's all we see of Finkleberg in this first part. The rest is given over to... Well something else entirely.

The first thing to point out is the main plot of the issue feels like a wacky 1980's adventure comedy. One in particular, and it should be noted that Short Circuit was originally released the same month the American version of this story was published. So how intentional this was is debatable, but it does have that Steve Guttenberg feeling to it.

We're introduced to young cowboy movie loving Charlene (the last and definitive in a series of young women by that name Uncle Bob has written about. Wife? High school crush? Daughter?), who is bored of her humdrum working in a supermarket life with her slightly dull friend Wendell as the only possible man with any interest in her. This yearning for adventure feels so like the start of a family adventure film the pay off seems to be really obvious, the fact it won't be is something we'll talk about next week.

Finding Skids turned over and in need of a new car, she uses Wendell's cousin mechanic (a possible call-back to Bumblebee in the first story?) to fix him up, and Skids himself is so in love with the idea of just being a car and doing nothing more stressful than driving he goes along with it. But another run in with Jake (which is also a name Bob loves, mainly for arsehole villains though. High school bully?) forces him to reveal his amazing driving on walls- and less convincingly rickety wooden fences- abilities. But the thrill seeking girl turns out to have her buttons pushed by the idea of living with a giant warrior robot, and the odd couple relationship begins. 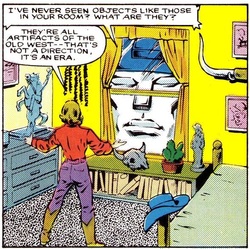 Skids is impressed by her two objects.
As the montage of them driving about and Charlene showing him the sights gets underway you can almost hear the Big '80's Power Ballard that would accompany it in the film version. But there's a little bit of steel beneath the froth; when Charlene talks about her cowboy heroes and their bravery it makes Skids feels a pang of guilt about having run out on the war, something that next week will more fully play out.

But there's little place for such seriousness here, and the big cliff-hanger is Skids having a soapy car wash from Charlene, orgasmically asking for his hubcaps to be polished again.

As odd as it sounds, this is actually a really fun issue, and by far my favourite of the "Human gets humorously thrown in the adventures of the Transformers" stories Budiansky did. It helps that, unlike Bomber Bill or Those Bloody Wrestlers, Charlene isn't an over the top Wacky with a capital WACKY character. She's just a slightly bored with her lot normal person, someone I suspect we can relate to as adults better than we could when we were children first reading this.

Yes, it's frothier than cappuccino and it's arguably badly placed when so much other stuff is going on (though that may have been out of Bob's control. There's a reasonable but totally unsubstantiated theory Skids got an issue to himself because the cartoon was going to completely ignore him and Hasbro wanted at least some serious promotion for the toy), but whilst finding out what happened to Team Perceptor would arguably be more vital at this stage this is still daftly entertaining. If Skids covering lilac Sideswipe in green paint doesn't put a smile on your face you're dead inside.

Art-wise, Herbe Trimple takes over from Don Perlin, and mostly does a very good job, even if the area Skids is tipped over in doesn't look all that much like where he crashed last week. The opening splash of Ravage, though copied from his famous box-art, is especially good. He also leaves you wanting Charlene to polish your hubcaps as well. 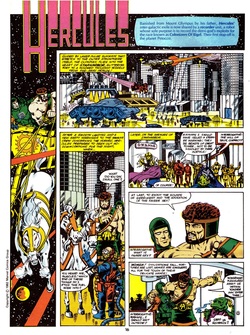 The Hercules recap boarder.
Transformation doesn't seem especially excited by the Charlene stuff ("If you can work out the connection between these two story-lines [Skids and Ravage], award yourself an honorary pat on the back"), but is otherwise still bigging up the forthcoming format change. This rather sneakily turns a bit of promotion for Cyclonus and Scourge's toys into a plug for Target: 2006. Which is not to be missed under any circumstances apparently.

With the format change just two issues away, that makes this the penultimate Matt and the Cat. As with The Chromobots all those months ago Kazybird clearly didn't know this was coming and you can feel the grinding of gears here as he desperately tries to start wrapping the whole thing up. As shown by the king of the fish men (I cannot be arsed to look up what he or they are called) randomly deciding to teleport our heroes... somewhere. It does try and convince you they all might be killed off, but there's no such luck sadly.

Hercules almost seems to be in a James Roberts comic, spending his time at a space-bar getting off his head and accidentally trying to start a fight with the nicest alien in the galaxy. It's almost a shame a crashing spaceship arrives to interrupt the fun.

Soundwave seems very off his game this week, giving odd, short and unhelpful answers. Most obviously telling Scott Jowett from Havant, who has written in to ask about Robot Points, to go bother Hasbro about it instead. Considering this was published at the height of summer I wonder if Furman had gone off for his week away in Bognor and someone else was filling it? Considering we're about four months away from Furman leaving his assistant editor's job to go do Thundercats (and thus won't be doing the letters until he returns as full editor) it doesn't fill me with confidence that the letter answers we'll be getting in that period will be up to the usual standard. What's especially a shame about this is it's the penultimate Soundwaves as well.

Next week, the last Bob Budiansky issue we'll be covering in 2013, and his last before Simon Furman produces the story that changes everything. But first Skids has to survive his Wild West shoot-out.

And after the amazing, much loved success of my “Thundercracker Says: You’re A Wanker” meme from earlier in the year, I’ve made one in celebration of Marvel Skids. He told Optimus he thought his plan was stupid! He’s the same mass as Galvatron! When he has nightmares, the Universe is threatened with destruction! He’s just better than you. This can be found at the bottom of the page, and took me untold hours to create. 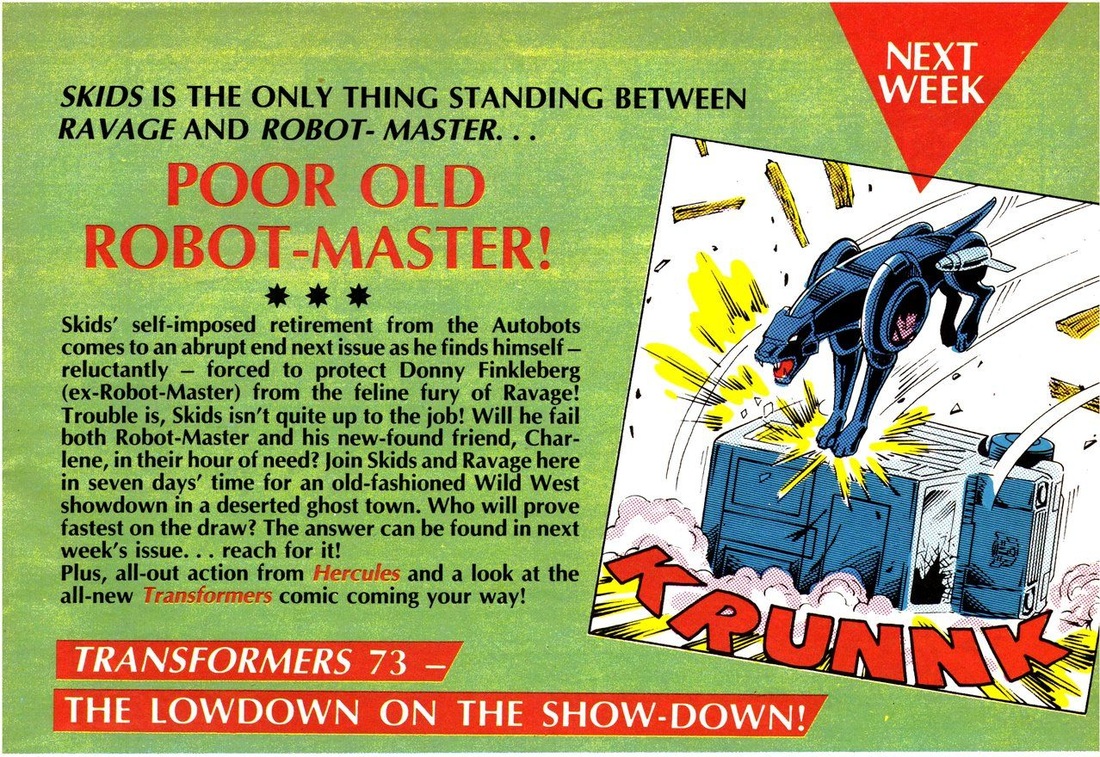