Do Not Forsake Me, O'My Darling. 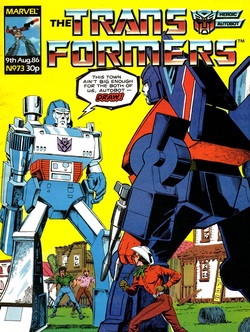 
Back during the Dinobot Hunt we talked about that stock trope of '80's American action television that is the urban cowboy, and now nearly six months later it's Bob Budiansky's turn to play with the format. Ironically this American won't embrace the idea as firmly as the British Furman did, but the climax of his last story before Big Things Happen to the comic still has some rootin' tootin' fun within it.

But before the ten gallon hats can come out, there's still time for Skids to get ten gallons of water all over him, as the issue opens with the conclusion of the soft-core car wash. As a cliff-hanger it was more than a little odd, as an opening it must have been bizarre and off-putting to anyone not in the mindset for the rather sweet story that follows, and let’s face it, that would be virtually anyone picking up a comic about giant alien warrior robots.

Luckily (or unluckily, depending on your viewpoint), Donny Finkleberg turns up and brings the plot back with him before Charlene can get to the point of having to remove her top because she "accidentally" got all wet. There's a nice bit of comedy as he goes all j’accuse over Charlene's car being an Autobot, but this is soon interrupted by Ravage, who has no patience with culture clash comedy. The ensuing chase (in which Jake joins in, amazingly he spots the van he hates driving past but not the giant metal cat right behind it) leads them to an abandoned gold mining town Charlene knows about in order to make their last stand.

[Oddly enough, I’m currently rewatching Quantum Leap, and as I type this the episode-where-he’s-a-TV-news-reporter has ended with him leaping into that show’s modern-cowboy episode, set in what looks very like the old town seen in this comic. Spooooky]

The Ultimate Battle.
This is a bit neat, and oddly feels more like 21st century Furman than 1980's Bob as the former has filled his comics of the last seven years with Bond references and such a town appears in the novel of Diamonds Are Forever (yes, the book just has gangsters and a train, no killer space lasers or wrong pussies to be found). But, whilst it's a conceit it still works and nicely pays off Charlene's obsession set up in the first half.

The centrepiece of the issue, as promoted by the cover, has nothing to do with the fight with Ravage. As Charlene and Donny scout out the town Jake sneaks up on the parked Skids and smashes his windscreen in with a metal pipe, knocking him out (we'll put this excessive damage down to the injuries he's already recovering from rather than him having a glass jaw. Or rather glass windscreen I suppose).

This leads to what is a first for the series, and something that we won't see very much of in either this or any other continuity: A dream sequence. The standard for later years will be doom filled visions of prophecy, usually had by Optimus Prime. To have a Transformer sleeping and dreaming naturally is something that will hardly ever be done (though there's one notable example to come in this year's Annual), and indeed by the time of the G2 comic the very idea of Transformers sleeping will be firmly refuted. So Skids continues his tradition of breaking new ground, and his dream here is most likely the inspiration for the far more excessive nightmares Furman will give him in the early 200's.

His dream, fuelled by Charlene's love of High Noon, sees him face off against Megatron in a shoot out over the girl, a shoot out he loses in a rather explosive fashion. There's something rather sweet about Skids ego showing through in assuming Megatron has any idea who he is when the Decepticon leader has (and never will) given much sign that he gives a toss about the rank and file Autobots, and most likely couldn't pick Skids out of a line-up that just included Skids holding up a sign saying "I am Skids". Megatron's description of the bone crushing death he has planned for Charlene is, much like Ravage's melting of Robot Master in the first half, surprising grisly for this story as well. 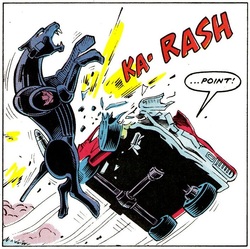 I think he got the point.
It's then back to reality though, as Ravage attacks whilst Skids is still groggy. There's an interesting moment as Jake is about to do a runner and leave everyone to die, much to the disgust of his girlfriend. We get a nicely ambiguous moment where he then proceeds to crash his much loved lilac Sideswipe into Ravage buying some much needed time. Did he do it on purpose having been spurred on into heroism by his partner's tongue lashing, or was he distracted by her and only did it by accident? The accompanying line of "You've made your point!" can be read either way, either him agreeing with her or being so angry and pissed off he's shouting and out of control, certainly he's been portrayed as an enough of a myopic hot head (chasing a van cross country with violence in mind) that taking the wrong turn in the heat of the moment seem perfectly plausible.

Whether intentional or not, this buys Skids the time he needs, and he and Ravage go mano-a-cato. Luckily, the people of the ghost town have, for some reason, put a building on top of a mine shaft (perhaps Scooby-Doo had previously been there to sort out the use of a fake ghost to scare people away from the gold mine?), and once said structure is destroyed, Skids is able to throw Ravage down it, joining his fellow 1984 characters from two weeks ago in leaving the book.

As with them, his fate is left slightly vague, rather than being declared dead Skids just decides Ravage won't be seen for a long time. What is perhaps surprising is, considering Furman has demonstrated an affinity for the character, how long it will be compared to the likes of Starscream or the (forthcoming) Megatron before the British book would just go "Ah sod it" and bring him back regardless of what the US was doing. It will be over 100 issues before we see this star of the early stories again, and he won't be having a good day.

With Ravage gone to cat-nip heaven, it's time for a slightly odd and rushed wrap up. Skids’ deciding to take Donny back to the Autobots makes sense, if nothing else what just happened has shown that, like James Bond, he's a danger to any woman in his life. But he gives a little speech about people should make do with their lot in life, Charlene should just stick with being a cashier, give up on her dreams and date the deeply dull Wendell.

I can't think of any adventure other story where someone yearning for a more exciting life gets it, and then decides being dull is much better for them. Even the terrible film version of The Hitchhikers Guide to the Galaxy had Arthur decide to go and become a space adventurer at the end even though his basic character hadn't been changed enough from the book version who (at that point at least) would much rather have stayed on Earth with a cup of tea. It's slightly disheartening to have Charlene's story end like this, as if Short Circuit ended with Steve Guttenberg deciding to send Johnny 5 back to the government for dissection.

Odd bummer of an ending aside, this continues the good silly fun of the first half, though it does almost feel a shame an action scene has to intrude when the stuff about domesticated Skids was more entertaining. Still, as fluff goes, this is generally superior fluff.

Yay!
With this being the last issue before the redesign, it's time for some important lasts. In reverse order of how much I give a fuck, it's goodbye to Soundwaves. Thankfully he's fully in character this week (Furman must be back from Bognor) and takes some of the page to sign off. What's perhaps surprising considering he's one of the Big Two letters page hosts (the Jon Pertwee to Grimlock's Tom Baker if you will), is how relatively short his run has been, at just over 50 issues. Less if you factor in it took a few weeks for the "True" Soundwave to emerge. Only Blaster (the Colin Baker) will do less, so the fact his run is remembered with such fondness shows how much the comic got it right.

On the other side of the scale, amidst the things the comic has gotten wrong, Matt and the Cat crawls off to die. The Transformation pages tries to make this sound like a sad departure, but the truth is more implied by the art of the cat getting kicked out of the door. The final instalment has Matt get teleported home, whilst Humph winds up in The Avengers mansion, setting up a crossover that will thankfully never happen.

Long term readers (my favourite kind) will remember that back in Chromobots Dudley's father was based on author Mike Kazybird (a fact revealed when he drew himself into the final part), in another sign of the writer's ego showing through it turns out Matt's Dad, who hasn't actually appeared before, looks exactly the same. Maybe Matt and Dudley are actually brothers? Who knows? Who cares? Matt might share a mother with Dudley as well, but my 30 seconds of searching didn't stumble across a Chromobots with her in, and that was 30 seconds more than I wanted to spend looking at that series again.

Kazybird's stuff has never been less than painful, and tellingly, unlike the later Combat Colin, has generated almost no reader feedback suggesting kids at the time felt the same. The fact this has clung around like a bad smell for nearly 70 issues (or to put it another way, longer than they thought Soundwave should stay on the letters page) is one of life's great mysteries.

With all that going on, there's little chance for Hercules to make an impact, but he saves the planet from the crashing ship and remains entertaining enough.

Next week the comic begins the transition into the third phase of its life, because whilst the exterior appearance will be jazzed up, the strip will be the last great hurrah for Furman's main obsession since Decepticon Dam-Busters! (at least when Hasbro UK weren't going "SPECIAL TEAMS!"), the Dinobots. “Ah” you’re thinking, “There’s lots of Furman stories after that with the Dinobots in!” Well, have no fear; over the next four weeks I will explain exactly what the difference is. 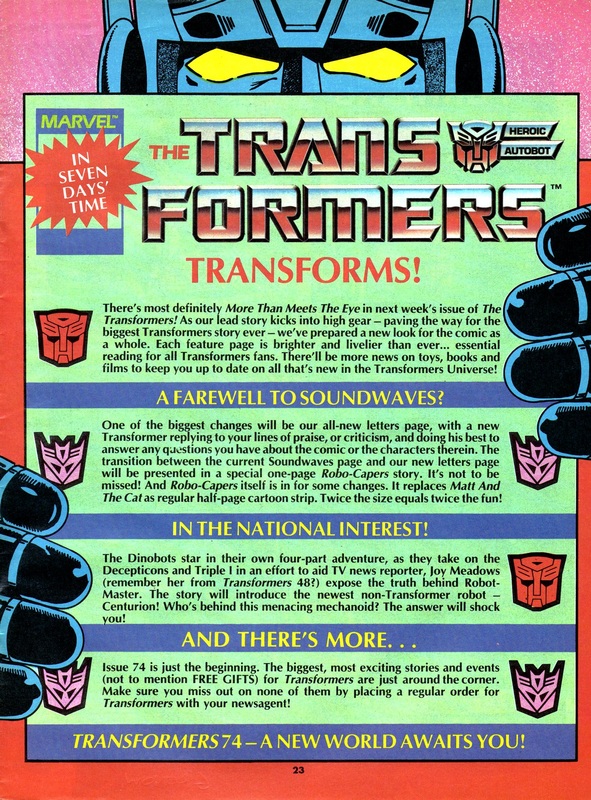 The outgoing Transformation logo... oddly I've never included it before.