A Built-In Remedy For Khrushchev and Kennedy. 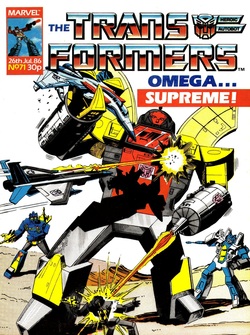 No! You are nothing more than another Autobot coward, scrap metal waiting to be born in the blast of my fusion cannon!


We must be in a fairly unique position for an Uncle Bob story; just two weeks after his last no holds barred all action with minimal human involvement issue here comes another one. They're much like buses in that regard. With all the set up having been put in place by the first half this conclusion sees just about every active character (bar the already excused Dinobots) strut their funky violent stuff.

This does mean there isn't a huge amount of plot, but Budiansky still finds time to throw in some surprisingly subtle touches and a decent amount of character development. Albeit amidst some of the daftest moment in his run so far.

Continuing on from the first half, the issue is evenly divided between two big fights. The first of these is the less famous of the two, mainly because we've already had a few Autobots Vs. Devastator smack downs by this point, though this is actually the side of the story that will have the most impact on the immediate future of the comic.

Optimus saves Skids from his leg wound (getting an apology for his Doubting Thomas behaviour), before continuing the attack on the Decepticon fortifications. This succeeds in its intended goal of drawing Devastator out so the Bumblebee can record his combination process, the entire point of the sneaky plan. 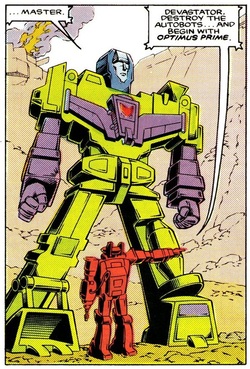 Decoy Shockwave.
Now, over here in Continuity Corner I have a few problems with this (though it is nice to see the little Autobot doing his spy thing). Even just counting the American stories, which after all is all Bob would have been aware of, the Autobots have already seen this once, and Shockwave's probing of Rumble (ohh-err) back in issue 37 (or just 8 issues ago from Bob's POV) shows it's possible for Transformers to share their visual records. So why do they need to go to the effort with the camera? Is it really more sophisticated than the optics of an advanced outer space robot person?

Of course, there's also the problem that Devastator doesn't combine in any way shape or form like the Scramble City guys will. There's also a moment that actually does make more sense than any other combination we'll ever see- the ones where everyone just sort of floats up into the right place- but just looks damn odd as Devastator forms laying on his back like a tramp who's just woken up on a park bench after a night on the meths.

Those oddities aside, it's still a nicely done fight, with Shockwave being fantastically smug as he thinks he's driven the Autobots off. The set up for the next issue is here, as Donny Finkleberg uses the battle as cover whilst he runs away very fast only to be pursued by Ravage; whilst Skids' attempt to retreat is ruined by the still pissed off Jake jumping in front of him and providing the passing Ravage the chance to fire a missile at the Autobot, tipping him off a cliff. Optimus just having everyone drive on is often held up as a bit of a flaw, but he's working to a very specific plan and the last time they hung round at the coal mine they had to put up with an attack from the US Army he'd obviously rather avoid this time. The real surprise is his assumption that Skids is dead, when the other half of the plot shows how hard to kill these robots are.

Yes, the real stand out bit of the issue that everyone remembers is Megatron and just about all the 1984 characters (bar Soundwave and Ravage) trying to take over the Ark only to be stomped into the curb by Omega Supreme. Supreme's dialogue as he bitch-slaps everyone ("I am the guardian of the gates, the junction of your destruction...") is second only to Straxus' "Mercy is not dispensed here..." line when it comes to Uncle Bob moments everyone can quote. 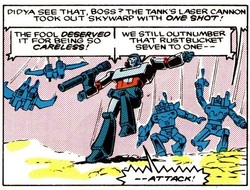 Hubris: Thy name is Megatron.
It's a fantastic scene that really shows off the power and size (though he already seems to be shrinking, it looks as if Megatron comes further up his leg than Optimus did last week) of Omega, but is far more fun than just a commercial as we get some fantastic moments for Megatron. He starts off smugly superior over the funny looking tank and base defending the Ark, before winding up screaming for Laserbeak to save him as Starscream, Thundercracker, Skywarp, Rumble Frenzy and Buzzsaw are all completely and utterly smashed to pieces. It's the most scared we've ever seen Megatron up to this point, and is a fantastic insight into the robot beneath the bluster.

Over here in Speculation Corner, in the alternate Universe where Bob had to introduce the 1986 Movie toys this would have been the perfect opportunity to "Kill" Megatron and have him be rebuilt into Galvatron.

Though it's a little static, the fight is mostly well done, only, as ever, being undermined by Nel Yomtov completely mucking up the colours again. Purple fruit pastel Megatron being the worst offender. Otherwise, the only thing that might have been nice would have been if we hadn't seen Omega in robot mode in the first half, which would have given far more impact to his transformation here.

And so that's goodbye to virtually all the original Decepticons (for now at least, and as far as we Brits are concerned, some will be back almost straight away). Bizarrely by just past the 100th issue mark the only two that will be left up and about in the American stories are Soundwave and Laserbeak. Yes, even Ravage is doomed (SPOILERS). The main reason this clearing of the deck isn't as infamous as the death's in the film is that the comic is very careful to point out the Decepticons haven't been killed, just put in "Cold Storage" (something that will be more properly explained in a few weeks).

It's hard to tell if this very careful pulling back from full on killing is Bob being keen to keep the Autobots as pure heroes (though he had no problem with Blaster killing Straxus is a similar pitched battle), or if he's just hedging his bets as he removes the toys no longer on sale. After all, even though he wasn't going to include them, he'd have been aware at least one of the Movie toys was a previous character in a new body. Plus Transformers spiritual stable-mate, G.I. Joe, had already fallen into the practice of releasing new toys of old characters (and over the course of that book's run there are moments where definitively dead humans make remarkable recoveries because of being back on shelves).

By not killing them he has an ace in the hole should there ever be a new toy of any of them. Which was very prescient of him, though ironically they'll be brought back into the American stories just at the point Bob will be throwing such caution to the wind and he'll start killing old toys wily nilly (mainly thanks to Starscream).

The issue ends by showing up the difference in character between our respective leaders as the deal with the fallout from their day. Optimus has, to all intents and purposes, scored a major victory, but the loss of Skids still weighs heavy on his shoulders. Though having Grapple put his head right up Prime’s rectum with his brown nosing can’t help his mood either.

Megatron however has decided to take the lemons life has given him and make lemonade. By the time he returns to the coal mine (incidentally, it’s a shame this doesn’t have a cool name like Fortress Sinister) he’s regained his composure shows his full ego by managing to persuade Shockwave that letting Optimus take some pictures was a far worse defeat for the Decepticons than loosing half their troops.

It’s completely daft that Shockwave falls for this and gives full leadership to Megatron, but bucket head’s full on chumpz is surprisingly entertaining. It’s probably the beginning of the end for Shockwave’s dignity in the Budiansky written stuff though. All in all, small niggles aside this is a good solid action issue, and is also pretty much the last time before the issues that write them out that both Megatron and Optimus get a decent slice of the action in the American series.

If not fake, then well timed.
Transformation is excited at the shape of things to come as we’re promised a major redesign for issue #74. A redesign that will see Matt and the Cat dropped down a deep dark hole. Huzzah! We’re also told the biggest Transformers story of all time is coming soon to tie in with a certain film. To all intents and purposes we’re now on a countdown, and unlike the Special Teams these grand boasts of scale aren’t exaggerated at all.

Soundwaves has a slightly suspicious moment this week. I’d like to think the UK comic was above faking letters, but there’s a very odd one here where Faiz Rehman from Tredegar just happens to write in with a “Have you ever thought of doing a Transformers guide book? I also notice there are some films at the cinema, have you ever thought of doing a Transformers film?” style question at exactly the right time for Soundwave to pimp out both the (ultimately going to be delayed) Universe book and the film itself. It feels like a total put-up job, though at least there’s some rare love for the cartoon though as Soundwave does admit it gets his voice right.

Hercules is mainly about setting a tone this week, other than him getting a robot sidekick and a magic SPACE horse there’s not a lot of plot here, but his interaction with some by the book aliens has a nice kooky feel and some genuine good humour to it. I think, assuming the plot picks up next week; this is going to be a fun series.

Next week, is Skids dead? Or just as soapy and wet as they come? 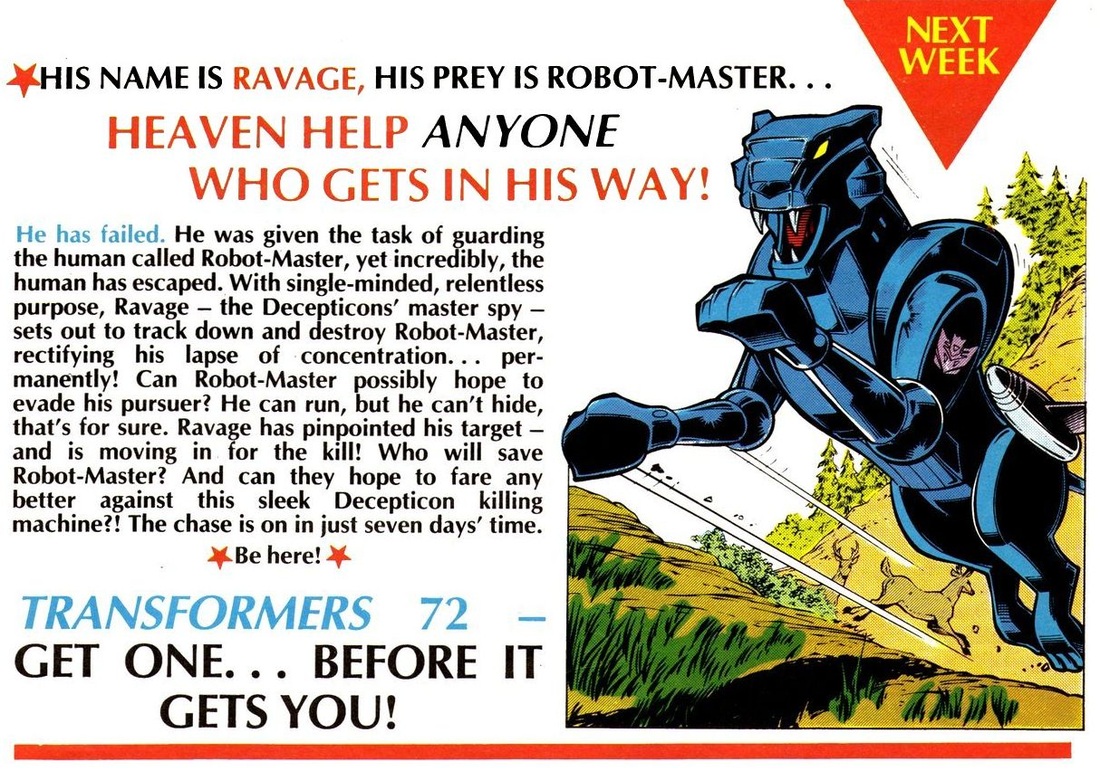