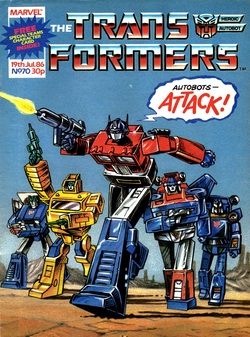 Wait! I don't like the sound of this Commander!

After the big events and epic storytelling of the last month the return to "Regular" Earth set stories was always going to run the risk of seeing things come down to... well Earth with a bump. So the big question is, will Uncle Bob manage to carry forward the momentum built up by the Cybertronian based action or will the entire house of cards collapse around his ears faster than Omega Supreme breaking into his constitute parts?

In theory the opening scene should be an utter disaster, being a shameless toy plug for Omega Supreme, built by Grapple following the events of issue 53 (though ironically, considering the amount of dialogue that's changed here in order to tie into the UK continuity the "See issue 14" box from the original American version has somewhat oddly changed to “See issue 15”). Optimus Prime shows off all Omega’s amazing super powers that will be used to guard the Ark to the gathered Autobots. With Prowl missing either because he's one of the dozen who are mentioned by Ratchet as being off-line or due to him being really pissed at his "Ultimate Autobot" idea being nicked.

What could, and probably should, be a fairly dry scene of promotion and exposition (Optimus lays out his plan to have Omega guard the Ark whilst they go steal the secret of combination from the Decepticons. That's the sound of Prowl crying in the background there) is livened up rather smartly by Budiansky throwing in the first dissent in the Autobot ranks we've seen from him.

The fact Grimlock and the Dinobots find Prime's plan to be really stupid and wander off in disgust isn't that surprising (though more on the full implications of this in a second), the real shock comes from Skids questioning orders. Not so much because it's against his character (I think this is the first time he's spoken since his introduction, he has no prior established character), but because the ordinary Joe Autobots normally go along with the plan of the week no matter what, especially in Budiansky's stories. This and Skids later musing on how much fun it'd be to just be a normal well looked after car is more set up for the following story than directly related to events here, but still makes for a different feel to the usual Ark scenes that's very welcome.

Now, let’s talk Dinobots for a second, in their first showing in an American story since Repeat Performance!, and the extent to which the UK has to fiddle the scene in order to make it work with their stories. The main purpose of this scene is to explain why the Dinobots aren't coming on this vital mission (which is odd in and of itself as Bob hasn't bothered with such things in any of his other stories since their last appearance, later in the year Target: 2006 will strive to write them out of the action right from the off as well) and have them leave the Ark, presumably because Uncle Bob already had some of his odder story choices we'll be seeing early in 1987 in mind. It also offers a sort of explanation for why American readers haven't seen them for a while, apparently comic Prime, much like his TV counterpart, has kept them in a cupboard for being funny looking. 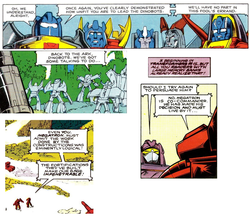 The changed dialogue and wrong "See Issue" box.
Now, from the point of view of the British team, not only have the Dinobots been present in pretty much every story the main writer has given a toss about, but the very next home-grown epic is going to feature them as well. So the dialogue here is altered to have them bitch at Prime for other reasons, and head back to the Ark so as to wait patiently for issue 74 rather than going into the wild blue yonder.

You can see the join between the original and new lines, not because of poor cut'n'paste this time but because in the Bob written original words either side of the changes Grimlock speaks like his TV counterpart for the first time (whether because the characters TV voice is so distinctive it couldn't help but bleed through in the end or because after the long absence Bob had simply forgotten he'd ever been written differently is hard to say), whilst in the UK sentences he... Well actually he doesn't really talk in any way like he has before, his words being strangely rigid and formal in a way even his more sensible UK speech patterns don't sound like. I suspect these new bits were written by Ian Rimmer rather than Furman.

Alongside the changes made to the last story (oh, and there's another reference made to the Shockwave/Megatron "Joint leadership" later on, which actually makes more sense than the original like of Shockwave just calling Megatron "Our leader"), this sees the UK enter its great phase of reworking Budiansky's stories to fit their own. This will continue quite cheerfully until the early 100's, at which point the wholesale reworking needed to the Prime/Megatron "Death" issues will become too extensive (and expensive for what are supposed to be cheap as chips content) to keep going and the UK stories will take a step back from tying directly into the American series' events.

[EDIT: Now, here's an exciting update for you, long time (and often mentioned) contributor Ryan F has pointed out some of Shockwave's dialogue about the Constructicons has been altered as well (removing an explanation as to why American readers haven't seen them since their first issue, apparently Shockwave rounded them up... from somewhere. Again, the UK change is less headache inducing). I've now added this speech bubble to the above montage of changes.]

The other big thing to note this week is the almost total lack of follow up on Blaster and friends from the end of last issue. Megatron leads a team of 1984 Decepticons (and of course, 1986 is a bad year for 1984 characters to go out by themselves, I hope they'll be OK) to meet Straxus' team from the Space Bridge, only to find the Autobots surrounded by humans. But this very brief scene is only used as an excuse to have Megatron away from the coal mine base when the Autobots attack; otherwise it's going to be a while before we find out what happened to the Cybertron 7.

This is the first sign of how the American series is going to increasingly space out its ongoing storylines, often not returning to a plot for months on end (an early sign of this being the fact it's been five months for American readers since Grapple's secret plot was mentioned). This will be especially prevalent around the time of the introduction of the Headmasters, when Bob has to juggle the Blaster/Grimlock/Goldbug/Fortress Maximus/Those Bloody Kids plots and new toys, often not completely successfully. Throw in the UK adding their own adventures to the mix and American storylines with a clean through line are going to be much harder to find. 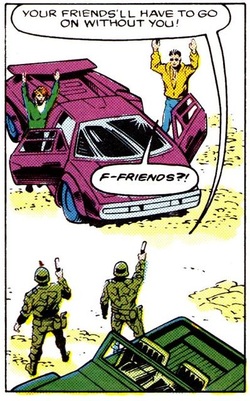 The next Ehobby Masterpiece Sideswipe?
The rest of the issue is fairly straightforward, though there is what will be revealed to be a nice subversion as what seems to be a bit of typical throwaway Uncle Bob human based comedy turns out to be fairly important set up for the next few weeks. Skids nearly running what I believe is technically called a Sideswipe Car off the road and the driver, one Jake Dalrymple, gives chase only to be mildly confused when the army around the coal mine arrest him. Normally you wouldn't expect to ever see him again but he’s going to be a big thorn in the side of our favourite theoretician.

What's nice about Prime's plan when they attack the coal mine is that it's not just brute force, he's actually got a sneaky scheme to trick the Decepticons into giving up their combination secret (boy, it's a shame the Super Special Matrix Message about the special teams didn't include more firm plans. More seriously, this is where the discontinuity between UK and US really shows as Second Generation! had been so keen to point out the new combiners are going to be totally different from Devastator), though we'll have to wait till next week to find out what. We're also going to have to wait 7 days to find out what will happen as a result of Megatron's decision to ignore Shockwave's call for assistance and instead go attack the Ark. Which is defended by a 1985 toy. With Megatron commanding a lot of 1984 toys. I wonder how that will go?

The cliff-hanger though, is Skids being shot in the leg. This shows the direction the next few weeks will be going in. Overall this is a pretty solid opening despite mainly being about getting pieces into place, it's not at the same level as the last month's worth of Bob but still makes for an entertaining read.

Barely readable Hercules into and cards explanation.
The big news elsewhere this week is the final Special Teams card (Menasor), which right at the end gets caught up in controversy. The Transformation page makes a slightly cryptic comment suggesting the kids reading need to trim the cards themselves if they don't fit perfectly, something Soundwave explains in more detail. It turns out several of the spaces on the wall chart were the wrong way round (landscape rather than portrait) to place the cards in. Hence the need to trim. Oddly, when explaining the stupid mistake made by his carbon-based helpers; in response to Neil McClean from Brixham's letter; Soundwave talks about the final card being "Next issue". Has this letter been held back in order to avoid embarrassment with Panini?

The other big thing is our new back up strip, Marvel's 1982 Hercules four issue mini-series. This is delightfully camp fun continuing the less than serious vein of Rocket Raccoon that seems to have been picked because of reader familiarity with the character from the UK run of Secret Wars. The title of the first issue, What Fools These Immortals Be!, nicely sums up the tone and has a pretty decent mini-cliffhanger as Hercules is exiled to space from Olympus for being a bit of a dick.

It has to be said this week's cover is one of the weaker UK ones, John Stokes just doing a straightforward copy of some interior art, but without adding any of the extra detail needed to make it work on a larger scale (except, oddly, to give Tracks his toy head instead of the more familiar one he has in the panel itself). For those wondering about the Next Issue box last week, though the "Autobots, warrior mode!" line is pretty much present and correct it makes more sense here than it did when placed over reused Stokes art from Crisis of Command!, as it accompanies the change to robot mode rather than the slightly less warrior-ish truck.

Next week, Optimus puts his cunning plan into full effect and Megatron is so scared by Omega Supreme he turns purple.


[With thanks to Zigzagger of TFArchive who checked his original Marvel US 19 issue to make sure it originally said "See issue 14".] 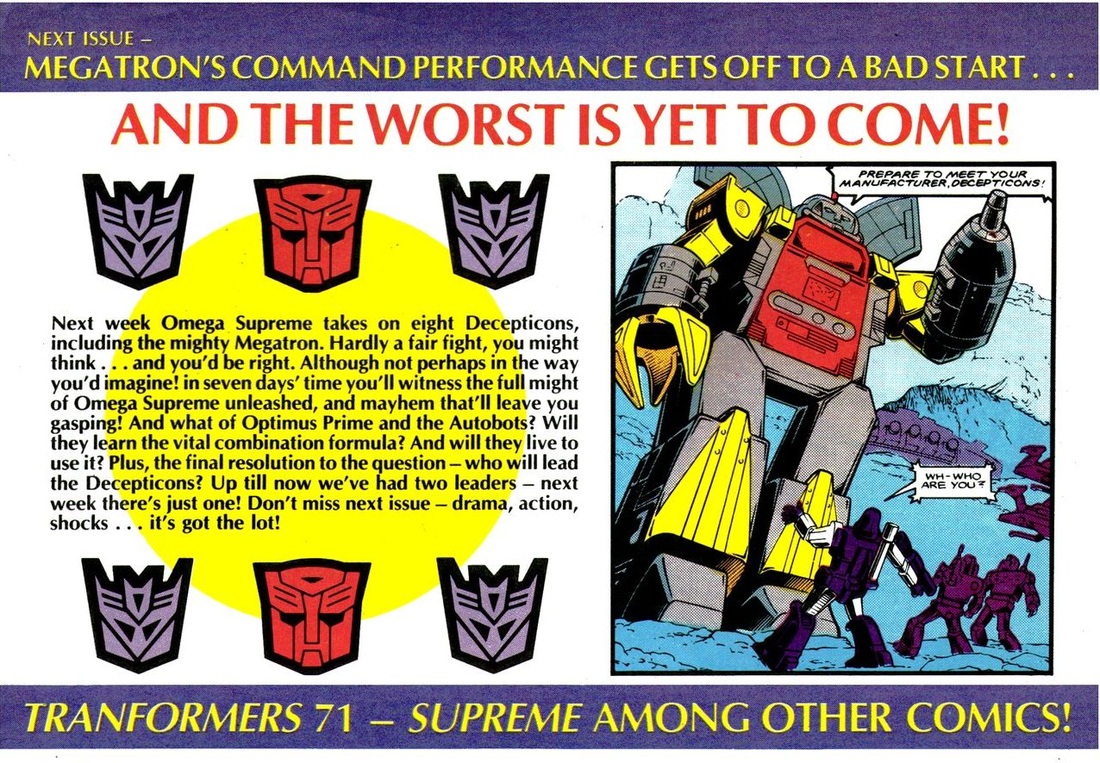