Love Can Build A Bridge. 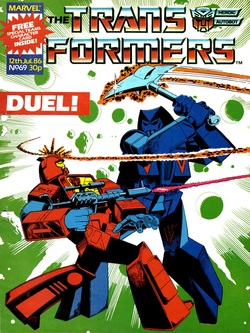 
Those responsible for this will pay with their lives! And I will collect the fee personally!!!


Issue 69! Way hay! We all know what that number means don’t we lads? Nudge nudge.

Yes, the number 69 is, of course, Tara King Offa The Avengers’ code-sign. What else might you have thought I meant? Such japery aside I must now perform a metaphorical 69 on the site, as I lean back into last week’s entry to make a correction. As you may recall I berated the small child who had originally owned that issue for drawing round the altered in the UK panels with a pencil. However, I’m now assured by well informed regular contributor Ryan F (and if you haven’t already, do check out his own ongoing GUIDE for the Marvel comic) that every version of the issue looks like that. It may look like the scribbling of a small child but it is in fact the bodged result of a poor cut’n’paste job.

Considering the comic was normally much better at that sort of thing this suggests a very late in the day decision to change those speech bubbles, probably because someone realised it was their one and only chance to mention the joint leadership Second Generation! went to great lengths to create before the events of issues 70-71 changed the status quo once more. I would now complain about my copy 0f #69 having been hole-punched, but shall refrain in case it was really Ian Rimmer in a fit of madness.

But now we cross the bridge back to this week’s events, and after three issues of build up this is the all action final. With one exception there’s not a huge amount of depth going on here, but it does still have a lot to recommend it (not least being that after the slightly awkward human scene in the first half the fleshling presence is kept to an absolute minimum this time).

The attack on Darkmount gives us something we’ve not often seen in battles to date (which have mostly consisted of just both sides shooting and/or throwing punches at one another): tactics. Perceptor’s two pronged attack, where he leads a diversionary assault on the fortress itself whilst Blaster sneaks in and blows up the Space Bridge, is well thought out and adds some spice to the traditional action scenes. It also lets poor old Shrapnel get bitch slapped a bit more by Straxus for trying to point this out (seriously, how is Shrapnel not one of the more beloved characters in the comic after his excellent comedy showing in this arc?).

There is one strange bit though, in that, as Perceptor is attacking from beneath ground, he needs a couple of Autobots who turn into drilling machines  to get to the surface. As the 1985 toy-line that so much of this issue introduces included an Autobot who turned into a drilling machine, you think Bob would take this moment to include Twin Twist (and maybe bung in fellow Jumpstarter Topspin as well) wouldn’t you? But no, Budiansky obviously hated the Jumpstarters for some reason, perhaps he’d seen the toys, and instead creates Borebit and Corkscrew. And then, rather cheekily for characters only introduced in the previous panel, instantly kills one of them (well, seems to anyway, it’s mildly confusing as Nel colours him as Beachcomber. As neither is seen again presumably the other dies off panel as well). That’s pretty lazy for hi-then-die characters; they could have at least been hanging about Autobase earlier. 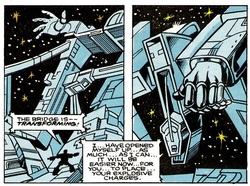 Biggest Transformer till Metroplex.
Whilst all this is going on, Blaster is at the bridge and all ready to blow it up when he makes a shock discovery after it starts talking to him. With all this talk of him being a neutral pacifist scientist it was easy to imagine Spanner as a tiny weedy little guy, not unlike Scrounge. But in a nice subversion of expectations he turns out to actually be a giant, and in a sick twisted act on Straxus’ part (and hey, I only just noticed is that with the exception of the blatantly made up at the last second Borebit and Corkscrew all the comic created new Transformers in this storyline have had S names, Bob’s version of Furman’s double A for Cybertronians?) he didn’t just force Spanner to build the Space Bridge, he built him into it.

It’s a fantastic twist, and one of the few times the comic would actually delve into the full impact of what being able to transform into different things could actually mean for a species. It’s also a really sadistic and twisted idea that I’ve no doubt stuck in the mind of many a younger reader.

The downside though, is the following scene of Spanner begging for death and encouraging Blaster to blow him up for the greater good is a straight rehash of the scene between him and Scrounge two weeks ago. Obviously this particular guilt trip won’t have the same impact on him as I don’t think he mentions it ever again, unlike poor old Scrounge who, shall we say, weighs much more heavily on his conscience.

The delay in talking to Spanner gives the Decepticons (well, Shrapnel, but he doesn’t get much thanks for it) chance to realise what’s going really going on. So Starxus leads an attack on Blaster whilst at the same time activating the bridge in readiness for sending Megatron reinforcements. 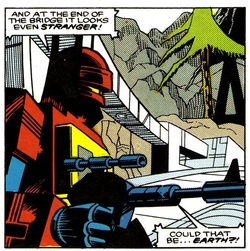 Strange new world.
Rather nicely the comic does take a little moment here to have Blaster take in his first sight of the strange new planet on the other side of the bridge, emphasising once again the alien nature of the robots. Interestingly when the bridge is seen from the other side by two police officers there’s little of the usual Budiansky comedy in their brief exchange.

There’s little time for sightseeing though as Straxus attacks, resulting in one of the comics more famous one-on-one fights. Whilst it’s not hugely dynamic it once again involves good tactics on Blaster’s part as he tricks Straxus into whacking a vital part of the bridge with his axe, before kicking him into interdimensional space, causing him to explode (he’ll be back in the UK comic as a head. This is getting off lightly compared to his fate here as everything except the top of his faceplate blows up). As far as the American comic goes though this is a decent, melodramatic, exit to what will remain the best of the one-off villains.

The damage and the explosion destabilise the bridge, and Perceptor’s team come to his rescue- with Powerglide also briefly coloured as Beachcomber, Nel must have really liked his scheme- but are forced onto the Earth side. It’s not actually clear if Spanner is killed or not (though Blaster sort of assumes it. Meanwhile no one mourns Borebit and Corkscrew), but vital time has been brought to warn the Earth based Autobots of the new danger whilst it’s being prepared. As Perceptor and company are approached by Earth authorities, they get ready to greet their new home...

As the final quarter of a big action movie, the second part of The Bridge to Nowhere! is pretty much perfect, fast paced, well drawn (I especially love Starxus’ big space gun alternate mode, it’s a shame the eventual toy didn’t go for something similar) and with just the right touch of humour in the Shrapnel/Straxus exchanges. Overall, if Uncle Bob didn’t care much for the Transformers movie this feels like him attempting to show what a big budget blockbuster about the robots should have been like, and it more than succeeds. We’re a couple of months away from the definitive British story that everyone remember and talks about and which had a huge impact on the world of the comic, and this is the American equivalent. After a shaky second quarter 1986 is now shaping up to be a very good year. 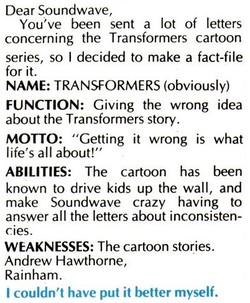 Strangely missing from Tranformers Universe.
Elsewhere, it turns out the 1985 mini-bots have been released just in time for the 1986 ones to come out as the Transformation page uses the sidebar to advertise the newest releases. Enjoy this mention of Hubcap and Swerve as that’s the closest they’ll be coming to appearing in the comic. The sidebar mentions readers have been keen to point out the comic has been “Remiss” in promoting the toys; you have to wonder in this case if “Readers” is a euphemism for “Hasbro UK”.

Rocket Raccoon concludes with the liberty of the loony world and the Raccoon and his friends blasting off into space to explore the wider Universe in a spaceship in the shape of a giant robot. As you do. It did meander a bit and didn’t really have enough plot for four (original) issues, but overall Rocket Raccoon has been a fairly enjoyable batshit insane read. The comic is slightly coy about what will be replacing it next week, promising a “Surprise”. I wonder if they just hadn’t picked anything yet?

Soundwave meanwhile is helped out by Andrew Hawthorne from Rainham, who has sent in a fact-file about the cartoon explaining how useless it is in every way. Matt and the Cat something something something. You know the drill on that bit.

One interesting final thing to note is that the next week box uses some John Stokes art from issue 43; maybe they really had no idea what was going to be in the next issue? Luckily, I do, so next week join me for the start of the story that brings the Dinobots back to America and gives us the amazing (for two issues at least) Omega Supreme! 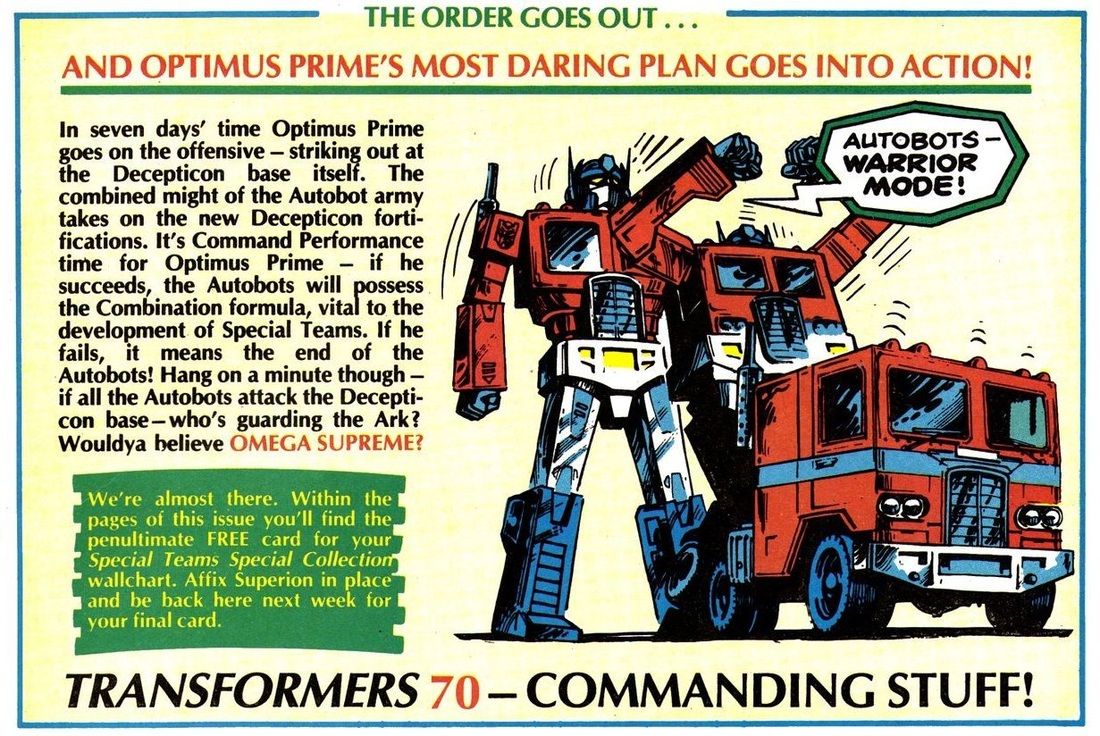