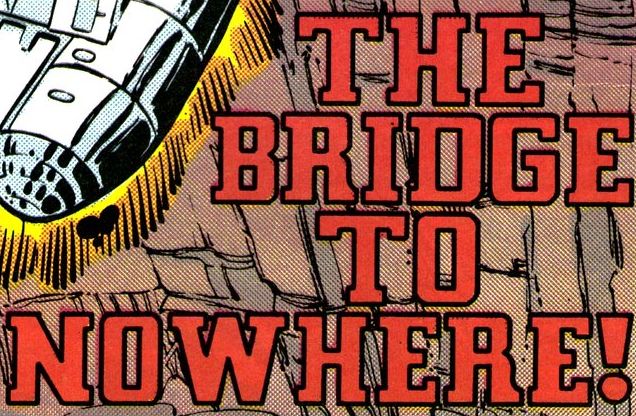 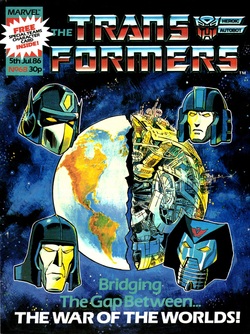 
What kind of bridge only goes halfway across and has monsters materialise on it?


We have a surprising bit of foreshadowing for future events on the cover this week as it shows Straxus as just a head for the first time. I don't know if this was an influence on how the UK's subsequent decided to bring him back, but it does emphasise what a cool looking unique head he actually has. Which is lucky as we'll be seeing a lot more of it.

Now, all that sounds a bit tedious, but that's nothing compared to spending an hour with the two humans that open this issue. Yes, after the drastic format departure of the previous story we're back with an Earth based opening, as two campers go for a drive through the woods. Visually this sequence of them finding half a bridge floating in the air before a giant robot materialises on it and explodes is great, a nice mysterious teaser. 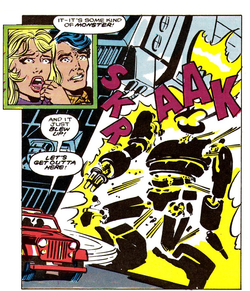 Say What You See.
However, it's completely undone by the dialogue, which oddly avoids the typical Budiansky gags, but instead has them simply narrate everything they see in the single dullest way possible, like they're doing audio description for the blind on a DVD. God help anyone who gets stuck watching Charlie and Rita's holiday slides, they'd make Arnold J. Rimmer's look exciting. And let’s not forget, humans are the ones Bob feels more comfortable writing.

This poor opening creates the impression there's going to be a drastic downturn in quality after the dark and brooding first half. Whilst it's a more traditional story overall it does however manage to rise above the dodgy opening to generally continue the return to form.

After this we skip to Cybertron (where, for those looking for Transformers: The Movie influences in the writing, it should be noted the two moons are directly referenced in the narration so it wasn't just an artistic choice), for the Straxus comedy show.

I mentioned two weeks ago the darkness inherent in the character running what is effectively the Transformers version of gas chambers would be eroded over time, but I wasn't expecting it to kick in so soon, this issue sees Straxus as the full camp queen he will be best remembered as with little of the more sinister elements on display. Poor old Shrapnel is constantly, delicately, having to point out the mistakes Straxus is making only to get constantly slapped down for his troubles.

In this case, Straxus is refusing to listen to the information that the Spanner built space bridge has developed a fault that needs to be repaired, and instead insists on constantly sending his lackeys (including future Squadron X star Crosscut) over the bridge one at a time as they blow up. This does diminish the impact of the character (and also makes him a bigger threat to himself than the Autobots as he has a higher Decepticon kill rate than Blaster- whose best friend died donchaknow- does at this point), but is at the same time, very, very funny.

It also seeds plot points as Blaster (whose best friend died donchaknow) is spying on the conversation, meaning we not only get some comedy but the establishment of his goal for the story: Try and rescue Spanner and destroy the Space Bridge. Back at Autobase we get a similar scene to the conversation about Scrounge two weeks ago, with Perceptor declaring destroying the Space Bridge is more important than rescuing the neutral scientist whatever Blaster (whose best friend died donchaknow) thinks. Though a nice moment in and of itself, the impact is undone by us already having seen how flaky Perceptor's cell can be on this sort of issue.

Back on Earth, we get the first appearance of some of the already established regular cast in three weeks. It starts off weakly with more bloody Robot Master that's mainly there to set up forthcoming plots as his listening in on what's going on is going to motivate him to run for his life. Though it is interesting to note his camera set up doesn't seem to need a human crew this time round, I guess they've found better work on something more wholesome like Jim'll Fix It since Second Generation.

The fun to be had here though is in the Megatron/Shockwave dynamic as the two argue and bitch like there's no tomorrow. The dialogue has been changed from the original American printing to reflect the joint leadership (the three panels in question are fully presented here. Though the scans have been cleaned up, on the actual physical copy I own a previous owner was clearly so excited by these differences they circled each panel in pencil), but the intent of two people who really hate each other is very much kept. It's almost a shame a hologramatic message from Straxus (projected as just a head... Seriously, the guy is just tempting fate) makes them team up as there could have been a lot of fun in the Dallas style Joan Collins/Kate O'Mara interaction.

The three exclusive to the UK panels, sans pencil marks.

It's hardly Ladybird though.
Back on Cybertron, the stage is set as the Autobots prepare to make their move from both underground (Perceptor) and above (Blaster; whose best friend died donchaknow). The ending is actually slightly melancholy as Blaster (whose best friend died donchaknow. Yes, I am going to do this every time I say his name. It’s stopped being funny now but by the 5000th time it’ll have gone all the way back round to being funny) muses there will be no chance to save Spanner, doomed to go the same was as Scrounge.

Most of the above makes this sound like a rather weak issue, and it is true that it is mainly moving the pieces into place for the grand final. But despite a couple of dodgy human moments this is actually a very fun issue. It is a step down from The Smelting Pool, but as I said last week, that's the sort of story you can't do every issue and this still more than holds its own against anything else Uncle Bob has given us since Optimus Prime got his head back.

Art wise, Don Perlin continues to do solid work, but Nel Yomtov once again lets the side down by randomly changing Straxus' colour scheme from blue and red to blue and gold. No wonder the UK will put him in special water than will just make him look green.

The Transformation actually plays up the Sophie's Choice aspect of the story (let the Space Bridge survive and give the Decepticons chance to ravage Earth, or destroy it and never see Optimus Prime again) more than the actual comic does, and also has a competition for some Corgi "Find your fate" style books. Paul Lounds from Little Sutton has sent in a rather nice picture of Megatron for Soundwave, who also explains away the couple of blank speech bubbles we've had recently.

Matt and the Cat meanwhile... Well at this stage I literally have no idea what's going on with it. Still, not long to go now before it "Goes Away". The penultimate Rocket Raccoon sees him team up once more with Blackjack O'Hare as they prepare to take the two toymakers down and free the humans. Amidst the wacky surrealism there's actually a nice centre to Rocket's journey as he's now keen to get out of the insane world he lives in and see the outside world.

Though I mentioned it in the comments last week, I would like to point out in the main feature that I've redesigned the Transformation section to make it just that little bit sexier, giving every issue its own page. It took bloody ages though and was very tedious, so if anyone spots any links I've not changed let me know.

Next week, it's the grand final for Bob's "Epic"; will it continue to keep up the quality? Also, Twin Twist makes an incredible impact by not being in the comic at all. It’s also issue 69, so expect some truly shameless terrible puns. 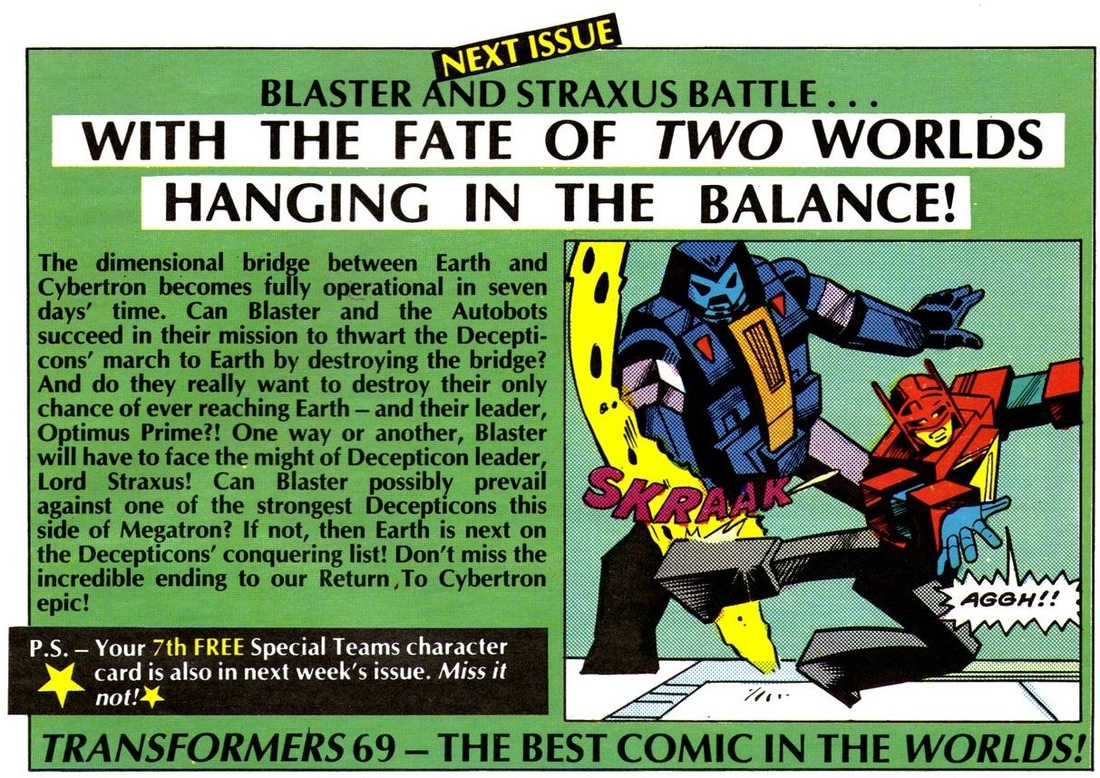