Why Don't You Release Me? 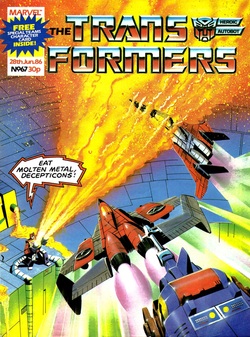 Okay derelict, dump your data or I'll tear your head open and find it myself! Where is Scrounge!

The last time we had a really solid opening to a Budiansky story in Rock and Roll Out!, with its thoughtful and slightly different look at the life cycle of Transformers, the second part saw everything fall apart as it fell into the more usual Uncle Bob tropes of wacky humans and comedy. So the question as we go into the continuation of his bleakest and darkest story to date is: Will his nerve hold this time or are we going to get a comedy cop going "Ah need ah vacation!" due to his inability to follow through?

The answer is given almost straight away as Perceptor's cell tries pumping the desolate inhabitants of the Dead End for information on Scrounge. Their reaction to Cybertron's homeless population is completely unlike what you'd normally expect from the Autobots. Cosmos is the nicest and even he is fairly contemptible of the "Old Beggar" they bribe for information, Blaster on the other hand is so obsessed with finding Scrounge he doesn't have the veneer of patience and just comes straight out with threats of violence to an unarmed old drunk.

This again sets up the difference between Cybertron and Earth. Optimus would likely have some sympathy for the down and outs and would give a crowd rallying inspiring speech. To the rebellion though these drop outs are almost worse than Decepticons because they're not part of the ongoing fight and are seen as little more than scum to be barely tolerated. It's less than a page but perfectly sums up how the harshness of life under Straxus has hardened attitudes. 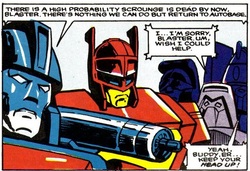 As indecisive as Maximum Dinobots.
Sadly this is followed up by the one bit of padding in the story. After the group had unilaterally decided to go try and rescue Scrounge last week here the news he'd been grabbed by Shrapnel makes everyone except Blaster turn back. It's absolutely no surprise whatsoever when the Han Solo moment happens at the end of the story (though at least Perceptor sticks to his guns). It would have been far more economical in terms of storytelling if the cell had simply stuck to their original decision last week not to go, and also would have made the ending more surprising as they wouldn't have been shown to be so flaky in their choices.

That misstep aside though, we're straight back into the good stuff as there's some fantastic black comedy to be had once Blaster arrives at the Smelting Pool. He's desperate to get chucked into it so he can search for Scrounge amongst the melters, but has to put up with overly efficient Kickback deciding to show the Autobot off to Straxus first. Some days you just can't get your arch foes to throw you to your death.

Straxus (only making a one page showing this week, indeed he's in far less of this two parter than I'd realised, which if nothing else shows the impact the character has) continues to walk that fine line between camp diva and Space Hitler, giving Kickback a good punch for not just killing Blaster straight off. "Nothing exists that can threaten Straxus! Nothing!" should be a ludicrous line but the cathedral of death he's standing over makes the words carry more credibility than they would if uttered by any of the other Decepticon leaders. 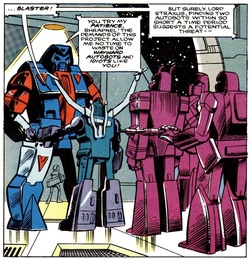 I've had bosses like that.
The gallows humour continues as Blaster decides he rather likes Straxus for having the good grace to help him out with his get into the Smelting Pool plan. And amidst all this we get a small bit of foreshadowing by Straxus talking about their super secret special project.

Once thrown in the Pool we get some more horrifying images of melting screaming robots clinging to the sides. It's also here that we reach the real emotional heart of the issue as Blaster finds the armless and dying Scrounge and desperately tries to save him, whilst all the tiny Autobot wants is to get his information back to Perceptor so the others won't think he's so rubbish anymore. Having the story resolve around characters feelings for one another is something that isn't very typical of the Marvel run (off the top of my head the only other moment that equals it is Inferno and Smokescreen in The Legacy of Unicron!), and winds up feeling very ahead of its time as it's more akin to what John Barber and James Roberts are doing in the current IDW comics.

Blaster's Scrounge hang ups are something that's going to become very easy to mock as the series goes on, partly because everyone must have lost good friends over four million years so he can't help but seem a bit up himself by going on about it when they don't, but mainly because there's a good drinking game in the number of times he mentions it. But here, his face as Powerglide (like I said, least surprising surprise rescue ever) pulls him out whilst Scrounge finally goes under is genuinely affecting and is the best bit of character writing Bob has managed to date.

The action scene that follows as everyone escapes is perhaps perfunctory, but is still well done and has a great set piece for pissed off Blaster as he bathes the airborne Decepticons with molten slag from two pipes in revenge for Scrounge. And yes, Beachcomber does turn into Kup.

It's the final scene back at Autobase that forms the real climax to the issue, and perfectly justifies the extent of the darkness of the rest of the story by giving the heroes something back they'd been missing: Hope. Scrounge's information reveals the Ark crew are all still alive, and in death he has been validated in a way he never was in life. It's a truly uplifting moment and Blaster's final thought on how his friend did good is rather wonderful.

To an extent, I'm glad things end on an upbeat note, as good and as different as the dark brooding return to Cybertron has been, for me Transformers is generally an optimistic franchise. That might sound odd when talking about an endless war story, but it's at heart about heroes who maintain their morality and humour despite the bleakness of their situation. Dark Cybertron was a nice place to visit, but I wouldn't want to live there, and the simple news brought in by Scrounge is going to change the tone of the second half of this arc and will stop things getting too maudlin.

Oh, and OK, Soundwave's message from Earth technically doesn't describe the situation on the planet at the time he sent it (most obviously in describing the then headless Optimus Prime as leading the Autobots. Though the line about Megatron having "Led" them is more ambiguous, especially coming from the shifty playing his cards close Soundwave). But in a story this good, who cares? 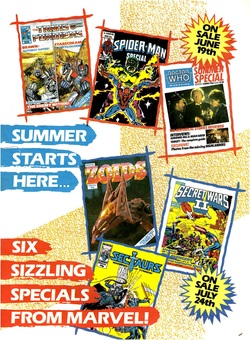 The big excitement of the rest of the comic is the new batch of Summer Specials. Whilst The Enemy Within! was mentioned last week here we get the whole range promoted on both the Transformation page and via a full page advert. All our favourite Marvel and licensed properties are represented: Spider-Man, Secret Wars II, Doctor Who, Zoids... And Sectaurs? Come again? Apparently this special is the conclusion of a story that started in the Spider-Man and Zoids comic, presumably what was usurped by Return of the Jedi. You've got to be a bit rubbish to be a mid-1980's toyline franchise that I've never heard of before, but the idea of concluding a usurped back up strip in specials will be revisited towards the end of the comic's life when G.I. Joe: The Action Force wound up needing a new home.

One thing that the Specials advert does show up is how out of place Doctor Who Magazine was amongst the rest of Marvel UK's output, amidst all the fighting robots and mutants the idea of new photos from The Highlanders couldn't have been that exciting to small kids.

Rocket Raccoon heads towards his endgame as he succeeds in curing the humans of their madness whilst the two rival toymakers team up to keep their stranglehold on power. Meanwhile Matt and the Cat doesn't really head anywhere. As per usual.

For the first time in ages (I think since Crana departed the title as editor) there's a non-competition related quiz to be found, as there's an anagram related word-search using the names of the various new Autobots and Decepticons who've appeared over the last two weeks. Thaw Rap being my favourite. This is above an Inter Face for Perceptor, solidifying the promotional aspects of the book.

Soundwave meanwhile, is keen to encourage female readers. I've no idea why, girls are yucky. And for those keeping track this week's Special Teams card is Bruticus.

Next week, it's a bridge over troubled SPACE waters for the Autobots as two worlds come closer to colliding. 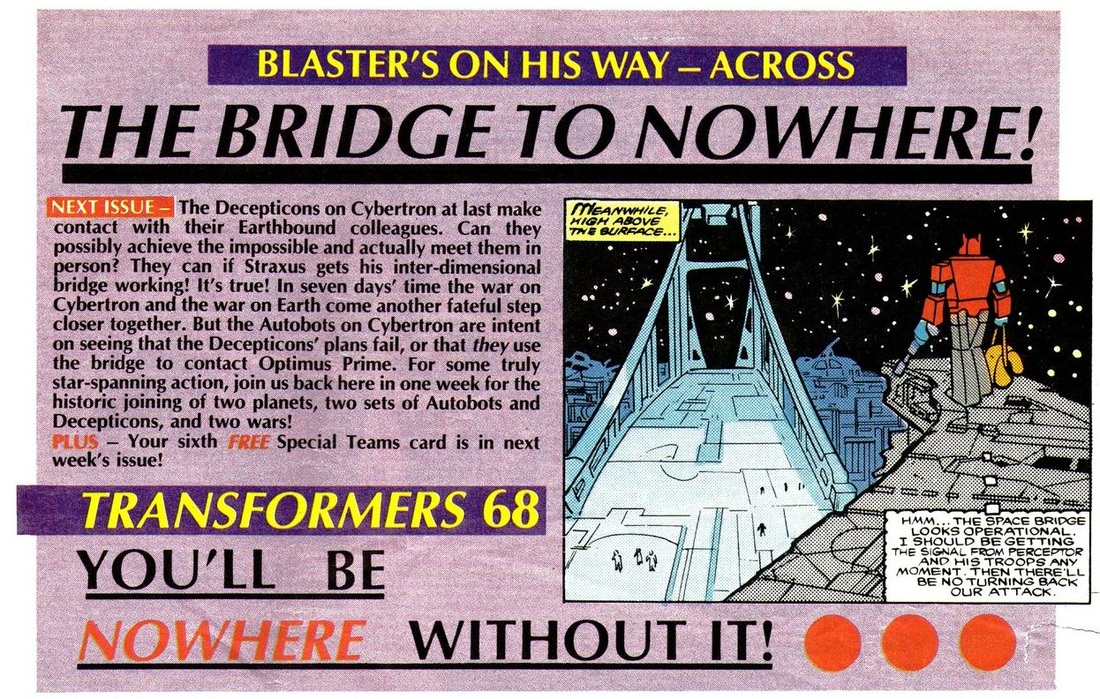