The Windmills of Your Mind. 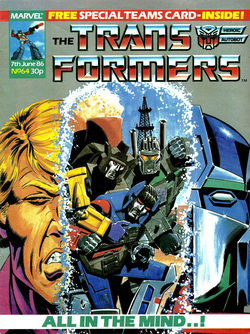 Well, I dunno... One message from the Creation Matrix and that's it-we're yesterday's news!

Well if nothing else the cover is much better this week. As with everyone else working on this story It's not Geoff Senior at his best (Buster looks like he's straining too hard on the toilet), but Geoff Senior on an off day is never less that pure gold even at the worst of times.

Incidentally, the comments section for the last few weeks are well worth a look if you don't normally glance that way, various readers such as Auntie Slag and Simon Hall have put forward some excellent and well reasoned counter-arguments on the quality of this story. Indeed the comments have been fairly well split between those who agree with me and those who really like this arc, suggesting this may be the most divisive story I've yet covered, assuming my relatively small readership can be considered a decent ven diagram of fandom. And I've enough of an ego to assume just that.

The first thing to note here is that this is the conclusion to the Second Generation! story, despite it formally carrying on into next week. But, title aside, as we'll discuss, the third part is basically a standalone that merely feeds off a couple of elements from the Megatron/Shockwave rivalry set up here. But as far as the story of Buster's dreams go this is the exciting climax, and those of you who love this story may need to wait for the soothing words of Auntie Slag as I'm not going to be very kind to what may well be, in my opinion, the worst single issue to date.

As the Transformation page points out, this is an extended version of the story given away exactly ten issues ago. This isn't such a problem for those reading the various collected versions, but that does mean for those of us following the weekly it's basically a rehash of something we only read two and a half months ago. That wouldn't matter so much if the extension added something to the story, but of the various bits and pieces it's only our brief glimpses of the Decepticons that put much of interest into the book.

The big addition to the story of the four teams fighting outside a power-plant is the new framing device of Optimus and Buster watching via a shared dream, which basically boils down to some twee comments about how awesome what they're watching is. It has to be said, with the one exception we'll come to shortly, this issue contains just about the worst dialogue in any comic Furman has ever written; trite, obvious and at times downright painful ("You could say we GROUNDED both our foes!" doesn't even work as a pun). 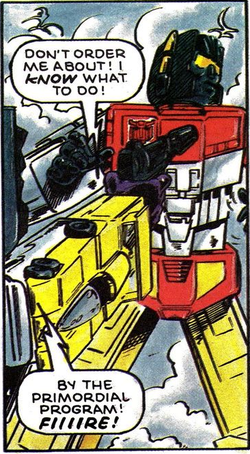 Painfully stupid.
That leaves the art to carry the action scene, and, whilst his layouts are great (the opening page of Buster and Prime preparing for their afternoon nap is especially well done) the quality isn't up to Kitson's usual standards. Maybe it was done in a rush due to Hasbro taking a more active interest than usual, maybe he just didn't care as he was on his way out the door but everything looks very poor this week.

At least one panel is directly copied from Stokes' art in the free comic as well, the Wiki suggests that, as Stokes is the one with the magpie tendencies, the work on this issue might have been finished first and it's the free comic that copied it rather than the other way round. Whilst this is plausible I find the idea unlikely, the art here has such a rushed feel I can't believe it was ready that far in advance. So, though there's nothing to say firmly either way, I would say it's more likely that for once Stokes was the one being copied.

Not even the usually reliable colouring is up to much this week, and whoever was responsible was clearly slightly embarrassed by the final result as we once again get a pseudonymous credit, in this case "W&P". Unlike the previous T.M. Hands the meaning of this one is beyond me, if it has any special meaning at all.

With the lengthy dream sequence not being up to much, it's up to the Decepticons to save the day. We only get a brief glimpse inside the still not firmly located Decepticon base, but it's a corker. Not for Soundwave, not for Shockwave, but for... Mixmaster? Yes, how many times have you heard the sentence "Mixmaster was the best thing in this comic"? Well, several if you've read many reviews of this story, but outside of it pretty much zero. But here he gets to be Furman's avatar, grumpily pointing out the special teams gimmick isn't that special and the Constructicons are way better. Shockwave then gets to be Hasbro's Avatar, telling the Constructicon that the special teams are teh cool so STFU. The rather brilliant response from Mixmaster being the opening quote at the top of the page.

But this is where the idea of the dream being a promo for the future falls down slightly. The Autobot combiners don't do too badly, but the Decepticon ones are completely useless. In particular they lose in the end because of their innate combiner gimmick. Because of one of the single stupidest moments in the entire run as Menasor gets into an argument with his arm (the name of which he can't even get right in this original printing, calling Drag Strip Dead End. Throw in Vortex and Blades getting mixed up at one point and you can tell pretty much no one gave a toss). It makes the entire special teams idea look utterly cack, and leaves you wondering why Shockwave gets off on the idea so much, "Yes! New ways for my troops to fail miserably!” 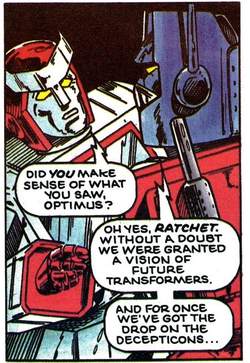 "We might even call them Ultimate Autobots".
Still, with the dream over, Buster and Prime wake up really excited about the idea of special teams, to the point the later completely forgets his opposition to the idea of building super Autobots at the start of the year because Superion and his character model with the stupidly large head is just so amazing it overcomes all his previous moral scruples. Though that complaint is perhaps a bit mean as this character switch was effectively something outside of Furman's control thanks to a force more powerful than Primus intervening in the shape of Hasbro.

Oh, and Buster actually talks to Jessie when he wakes up, but of course she still doesn't say anything for she is only the girl one, though she does seem to have gone for a boob reduction since last week.

With the actual plot of this story over, the final page is simply Furman throwing up his hands and going "Sod this for a game of soldiers, I may be required to make this special teams nonsense last a certain amount of time, but next week I'm doing my own thing and having some fun again". And he will, by setting up Shockwave and Megatron for their long awaited second smack-down we're at least going to see a bit more life in the book in the next issue.

With no Biggles this week there's no longer any excuse for Matt and the Cat to be skipped. Unfortunately. Though it's so empty it's becoming harder and harder to notice when it is there to be honest. The real highlight of the secondary stuff is probably a two page promotional piece for Dolphin Adventure Holidays, basically activity days to give kids something to do over the summer break. Paid advert it may be, but in those pre-internet days this was how you'd find out about this sort of thing and it sees the book fulfilling its role as a community hub. You also get 10 pounds off the cost of the week. Sweet.

Other fruit drinks are available.
Rocket Raccoon meanwhile uncovers the shocking secret of the why animals are hanging about with crazy humans and Blackjack O'Hare goes back to being evil. It's actually perked up a bit after I was feeling a tad despondent to this story last week, the origin of the loons is actually quite interesting, as is Rocket's anger at learning he was created as a pet.

The most interesting thing about the whole issue however, once again, comes from Soundwaves. Alongside the usual "The cartoon doesn't count stuff" we get our first oblique reference to both a certain film (surprisingly late in the day considering this is the end of May and it was originally going to be released sooner than its eventual December UK theatrical debut) and, more importantly in terms of this comic, a certain story. Andrew Bober from Colchester asks about the new Ultra Magnus and Galvatron toys he's seen on shelves and gets this rather cryptic response:

The names you mention are unfamiliar to me, Carbon-Based unit. It is always possible they are new Transformers from Cybertron whom I am yet to meet... But I cannot say for sure. Perhaps we shall encounter these two in future stories. As they say, who knows what tomorrow may bring!

He's a cheeky scamp that Soundwave, and man behind the curtain Furman is being incredibly deft there, making a joke that the readers will only get if they come back to this issue in three and a bit months time. That's placing a lot of (perhaps misplaced as he has to patiently explain a similar gag from issue 54 in his opening reply) faith in the intelligence and long term memory of the reader and is a shining example of what this comic does so well.

Next week, less complaining from me, more good stuff from the comic and, if that weren't exciting enough, more fan art.

Next week's entry will also likely be going up a day early on the Thursday because it is once again Auto Assembly weekend! Amazing how quickly it comes round, this time last year I was between the first two UK stories, which if nothing else shows how quickly the comic has evolved in a very short space of time. If you're going and see me hanging about looking sad eyed (there's a, blimey, two year old picture of me in the Heart of the Pool section, though I may be bearded and longer haired depending on my mood) do come on over and say hello, even if it's only to tell me off for not appreciating the genius of Second Generation!. I may even try and put up a YouTube video talking about my convention experiences over the next week. Mainly because I've just found out how to upload them and want to try out my new toy. Be back here in six days for my pre-AA exuberance. 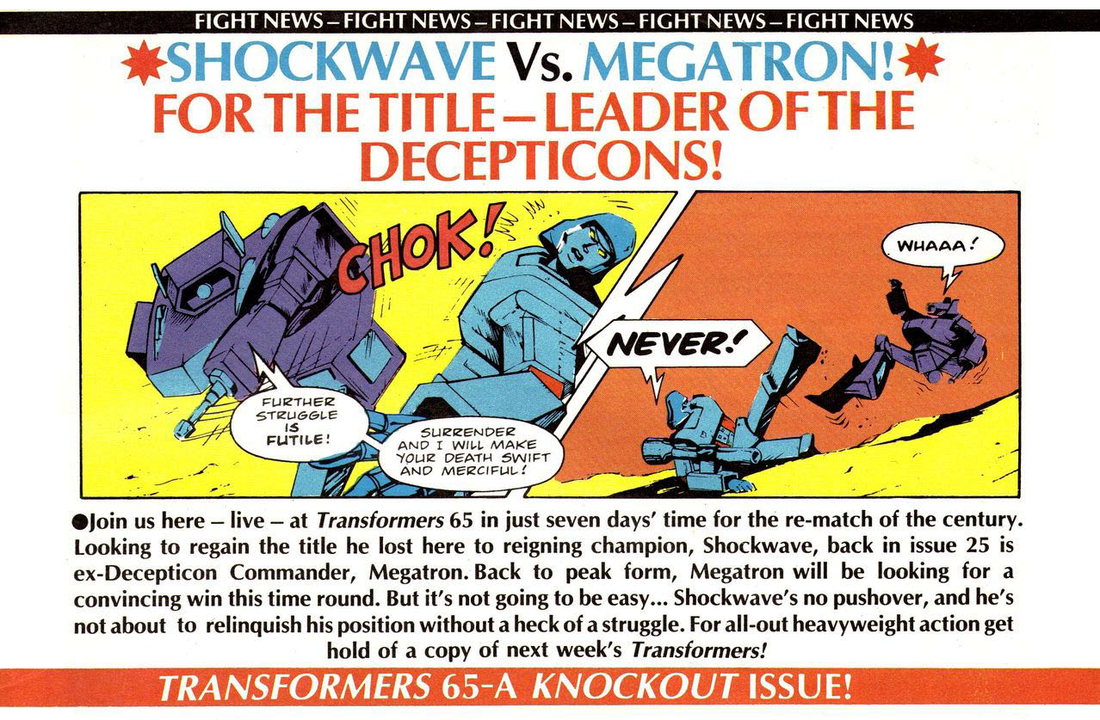