Look What They've Done to My Dreams. 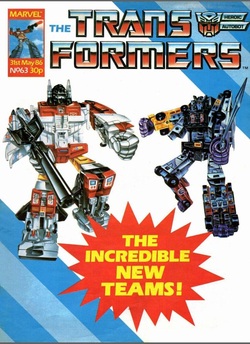 All hope is gone. Complete and utter despair washes over him, sweeping away the last straw he'd feverishly clung to...

The first thing to note about this issue is the cover. Now, to give it some slight credit, one thing I didn't know until pulling my copy out of its folder for the first time was that it's designed so that the free gift pull-out has the same image on it. Meaning that when the latter is wrapped around the former they match seamlessly, beyond the different text in the red explosion (THE SPECIAL TEAMS COLLECTION on the gift). However, this one tiny bit of innovation isn't really enough to excuse the horrible, poorly composited mish-mash of toy box art we get as result. Especially as they could have achieved the same with pretty much any cover as long as it had a simple background.

But that sums up the continued lack of thought being put into the comic (and don't worry folks, I'm as bored of being critical as you are, we're two weeks away from getting back to the good stuff and the rest of 1986 is much, much better than the last few months), though this issue isn't as bad as the last two you can still see the join between the bits Furman was actually interested in and the Hasbro mandated parts. Artist John Stokes- whose work tends to vary wildly in quality across a single issue anyway- also seems to get in on the act as the good art is saved for the less mind-rotting bad bits.

Incidentally, credit to the Wiki for collating the number of visual steals he's made from various American issues, I'm useless as spotting that sort of thing so it was pretty interesting to see the panels side by side.

Things actually start off really well. This is an issue of three and a bit parts: Buster's Shockwave themed nightmare; the toy pitch and Buster having to make a choice whilst he Dad moans like there's no tomorrow. With the bit being a little side visit to Megatron just to establish his situation for two issues time and the fact Soundwave is playing both sides of the street between him and Shockwave. This last section is too small to comment on much, but Megatron's constant frustration at Robot Master continues to entertain. 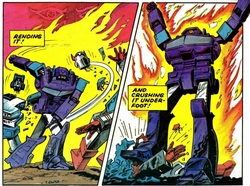 Though Shockwave does have two hands in the second panel.
The nightmare that opens the issue is the real highlight of the entire story. For years before reading it I'd always loved the panel of Shockwave decapitating Ratchet and Jazz from its reuse in the fourth Annual's "Story so far" recap (where it ironically represents the end of issue 8, where Ratchet not being there is kind of a thing), and the rest of the sequence doesn't disappoint. Freed of the need for any plot logic Furman and Stokes are clearly having a blast showing Shockwave chase Buster through a monstrous landscape whilst killing all the Autobots that Buster thinks will protect him. Every panel is dynamic, bursting with energy and almost works in its own right as a little short story. As a opening goes, it's a stonker, and unusually for anything not directly related to the combiners in this arc actually bares on the plot as the whole point is the Matrix showing that the old troops simply aren't good enough for this new age.

But on page 11 Superion shows up. And things go south faster than Prince Charles' chances of actually making it to be King. The second half of the dream feels insanely half-arsed in comparison to the first, as the various new combiners pose awkwardly at one another, whilst the previously doom ladder narration from Buster is replaced by him simply describing what he's seeing. As a point of comparison, just look at the aforementioned Shockwave/Ratchet panel next to Superion punching Menasor in the face and they barely seem to come from the same comic, let alone just being two pages apart from one another.

When Buster awakes from his dream with a scream (and who can blame him?) we move into the third and final part of the story, Buster and Sparkplug talking. Yes, Jessie is still there but she has literally nothing to say about the mortal peril her boyfriend is in, or her first visit to a giant alien spaceship because she is, of course, just a girl. Weirdly Stokes draws the two kids as much younger than they've ever been up too this point. Despite Jessie being *ahem* well developed in certain areas neither seems older than 10.

As the three go outside to talk privately we get the real nadir of the whole story. It's all gratuitous padding anyway as there's only one choice Buster can make (what, you think even with *Rolls Dice* Sparkplug hating the Autobots there was even the remotest chance of Buster deciding to have his brain eat him from the inside out over a potential cure?) but how he reaches his decision his terrible. He tells his Dad- who was there- all the things that have happened to them since meeting the Autobots, and takes up a page to do it. 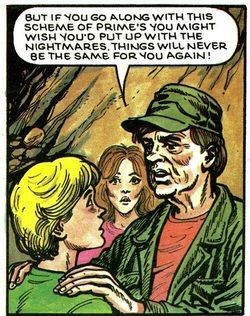 Jessie counts her lines.
This would be dodgy under most circumstances, but where it really falls down is this week we get the third and final Robot Wars!, update, which also recaps all these stories along with all the other ones the comic has done (except poor old Plight of the Bumblebee!, which is clearly deeply unloved). And this isn't like the similar redundant extra recap back when this was done on The New Order!, where the American team simply had no idea of how the issue would be presented in the UK. This is supposed to be a carefully planned event issue that draws in new readers as well as whoring the toys. If Furman and Rimmer had been more invested in what they were doing they would never have had both in the same issue. Instead it just seems to be there because the writer who doesn't want to do the story simply has no idea how the hell to fill the pages.

Things end with a bit of non-dream Shockwave as he plans to use the Matrix siphon which attempted to drain the plot device from Prime's head previously to "eavesdrop" on a shared dream Buster and Prime are about to undertake so they can sort out the Matrix vision. Exactly how the McGuffin is able to do this task it wasn't built for isn't even slightly touched on, but hey, that's the least of the problems this week.

The free gift, dodgy cover aside, it actually quite a nice fold out wall chart with pictures of all the special teams members plus gaps where you can put stickers for the leaders and the combined form that will be given away over the next two months, starting with Onslaught this week (presumably put together by Panini as the sticker album gets another plug on the Transformation page). Unlike the cover it's a sensible use of the toy box art as well.

As I've been fairly mean to Robo-Capers over the weeks (mainly for not being Combat Colin, incidentally Stringer is presenting some of those strips, along with various other examples of his work, on his blog at the moment) I should say the deeply silly gag of Optimus Prime being annoyed at you watching him changing did make me smile.

The equally exciting wall chart cover.
Soundwaves mentions Plight of the Bumblebee! more than Robot Wars does (i.e.: At all), names the pilot of crashed Autobot ship back in Man of Iron as Navigator and; when answering a question from Guy Grenville of Southport about which Transformers can fly in robot mode; has to once again very quickly point out once again how the cartoon gets it wrong so don't write in.

After a strong start I'm finding Rocket Raccoon a bit of a struggle now, I think the short length of these reprints is hurting the flow a bit and preventing the zaniness the chance it needs to really build up in the way I suspect it does in the original American issues.

Because of the story so far section we lose a couple of things, most noticeably the Next Week page which is squashed into Soundwaves and, huzzah, Matt and the Cat goes away again. But the real exciting thing is the continuing adventures of Biggles!, which are really building up to an exciting climax now... Wait... I have to watch the bloody film not to know how it ends? That would mean spending thirty seconds of my life buying the DVD from Amazon! Now I'll never know if Biggles gets back to 1917! Damn you Marvel! [Note: Problems with the scans on my tablet mean I can’t share Biggles this week, but as my PC should be finally fixed and all jazzed up over the weekend I’ll add it in from the master scans on that later.  UPDATE: Biggles now added beneath the tiny NEXT WEEK panel below.]

Next week we move into a scary Biggles-less world as we get a remake of the comic given away with issue 54. 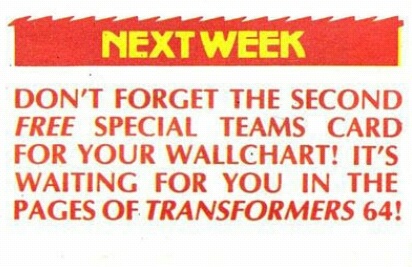 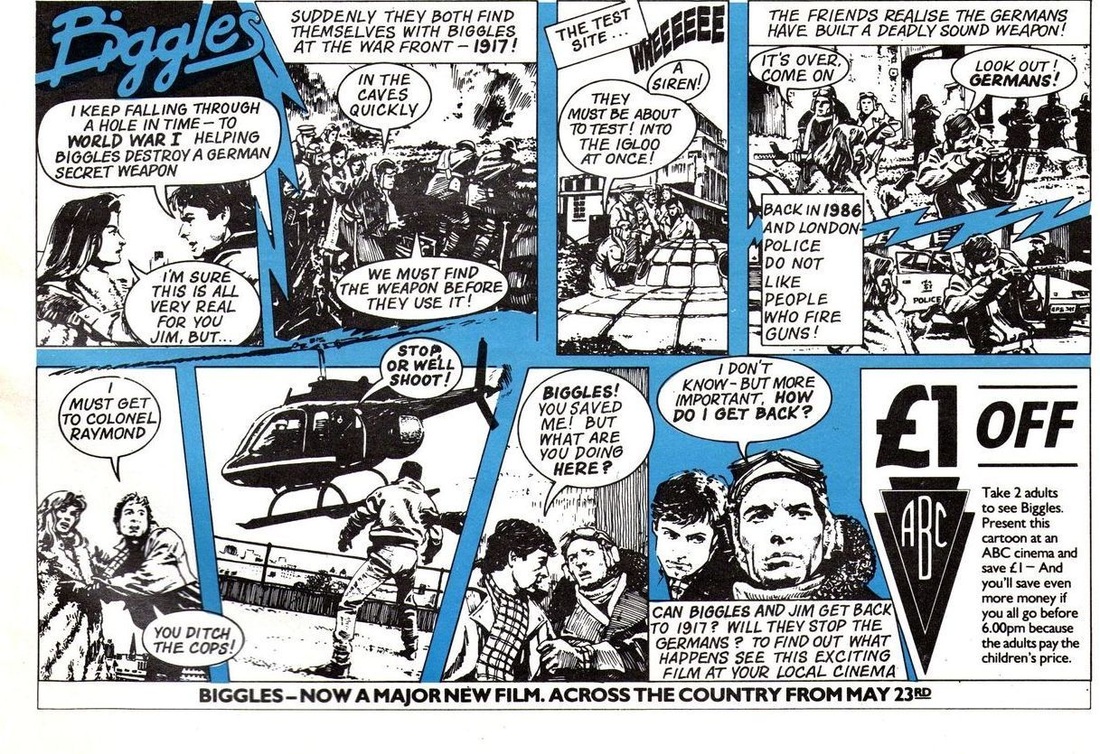