Then Rocky Pissed On Me (Customary In Sports). 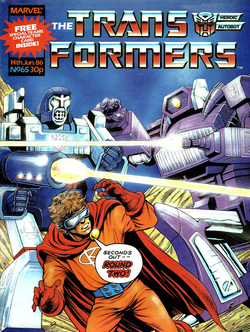 As already talked about at length last week, this isn't really the third part of the soul suckingly poor Second Generation! story, more a complete standalone due to Furman having run out of ways to drag the plot out (the special teams warrant one mention from each of the two sides that; put together; take up less than a page). So personally I prefer to think of this issue by the title I've thought up for it: Bitch Fight. Obviously though that would never have been an acceptable title back in the day.

As there's no exclamation mark.

So, if visions from the Matrix aren't the order of the day, what has been concocted to fill out the other ten pages of the story? It's a big fight wrapped in a rather contrived gimmick culminating in a tie-in to the next American story, ironically at the point the divergence between the UK and US material means we're going to see more editing of the later for things to line up properly (though the changes brought about by what happens this week won't really start to kick in for about a month).

That makes the issue sound like a disaster waiting to happen, especially as the last issue also had a rather gimmicky framing device with the dream sequence. However, it's amazing what a difference the writer being more invested in the material makes, and though it'll never be classed as one of the all time greats Furman is clearly having more fun and is once more paying attention to the little details resulting in a much more enjoyable read.

For example, take the issues main conceit: Megatron and Shockwave's return bout is presented as a boxing match complete with TV broadcast hosted by Robot-Master. This makes absolutely no sense on multiple levels. There's no indication where his human camera crew have come from; why Soundwave would join in the commentary team let alone allow it to happen in the first place and his voiceover breaks his cover story about the Transformers being his creations (which, lest we forget, is the only reason he's being kept alive). It's not even clear who other than the Autobots are supposed to be seeing this. 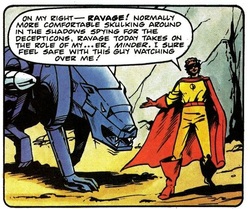 "Know what I mean, 'Arry?"
But the saving grace is how funny it is, from Robot-Master's slightly nervous introduction of his "Minder" Ravage through Soundwave slipping an actual "Puttup!" (Now revealed to be the sound he makes whilst spitting) into the dialogue as the human offers him a cigarette there's a nicely deadpan quality to the whole sequence. It's much fresher and more fun than anything in the last two weeks.

The Autobots reaction to the broadcast is also nicely played, with a gleeful Hound watching whilst Optimus himself finds the whole thing a bit of a bore and, other than hoping the two potential leaders kill each other, would much rather focus on making Superion's head more in scale with his body than it was last week.

This leads to a slight diversion necessitated by the return of the Dinobots in the next batch of American stories, without which I suspect this would have happened at the start of the next UK run as that would be two months closer to the release of the next Annual, which this little cut scene promotes. An alarm from the medical bay alerts Optimus to the fact the Dinobots (who have been having sever problems you'll only learn about by buying the hardback in September) have woken up and are as grumpy as ever. It's perfunctory, but has a nice closing line from Ratchet about how they're definitely alright once they start moaning.

Back at the plot, Soundwave has had enough and rather wonderfully interrupts the fight to tell his two bosses they're behaving like complete idiots and that (as per his intent in bringing them together in the first place) they need to work together. This insubordination brilliantly brings Megatron and Shockwave into agreement for the first time as they tell him to STFU in unison. Soundwave then continues his trend of being the most practical Decepticon in the comic by suggesting a Simon Cowell style contest where the two rivals will embark on a joint leadership, with the one who does best getting to have the job full time. It's a fine sequence that shows all three characters at their best.

"The head looks better, maybe a faceplate as well?"
The Autobots meanwhile are disappointed the show has ended, but Optimus is confident that with THE SPECIAL TEAMS the Autobots have the final advantage. But off in space Soundwave's message from back in issue 36 has just reached Cybertron... DUH...DUH...DUH!

With so much going on around the sidelines, the irony is the very thing promoted by the cover; the fight; gets a little lost and winds up the weakest part of the issue. That's not to say it isn't capably done, and Jeff Anderson is on good form (and I believe this is the first instance of him doing the Red Framed Flashback panels which will be put to great use come Target: 2006), but compared to the fun to be had from the secondary plots it can't help but wind up being overlooked. But overall though, this is a solid issue that starts an upswing in quality that will carry on until we reach THE BIG event of the year.

Soundwaves sees the Decepticon take great delight in the fact the mystery of "Puttup" has been solved, and both he and party loving dude Blaster (not to be confused with grumpy Wolverine wannabe Blaster we'll meet next week) get the Inter-Face treatment. Meanwhile Matt and the Cat sees the first ever use of the name "Razorback" in a Transformers comic, and compared to how IDW's attempts at Beast Wars ended this version gets of lightly. 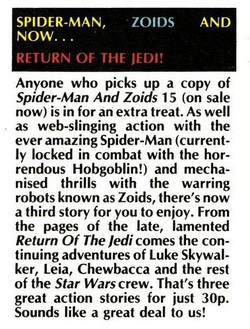 That said, and allowing that Rocket Raccoon is mainly divided between an action scene and exposition, this is a fairly quiet issue for the rest of the comic (though for those of you filling out the wall-chart, it's Silverbolt this week). The most interesting thing isn't even directly related to the book, as Transformation reveals that Star Wars, once the backbone of Marvel UK's tie-in books, has been absorbed into Spider-Man and Zoids (presumably just straight reprints of whatever American issues were left when that book ended). Yes, Luke Skywalker now plays third fiddle to Zoids. That's even more embarrassing than Jar Jar Binks.

As an extra special treat this week, long time reader Nick (who some of you may remember did a fantastic "Thundercracker says you're a wanker!" drawing for the site earlier in the year. For those who weren't around I'm not going to explain the context, use your imagination) has done another fun drawing based on the events of this issue which you can see at the bottom of this page. This site has some fiendishly talented readers.

There’s one, final, sad bit of news, this week has seen me reach the final episode of Columbo, ending over a year of the crumpled detective being on in the background whilst I write these things. I’m not yet sure what will become my new background watching, but RIP Peter Falk, even when you were blatantly 10/20/30 years too old to be a cop you were never less than brilliant.

This weekend I'm at Auto Assembly (if you missed my YouTube video, watch it HERE), hanging out at the bar in-between building a small temple of worship at James Robert's table. I hope to see some of you there, and assuming I don't get arrested for stalking next week sees us get the first of three BIG EVENT stories of the year than make the special teams look like the small fry they are as we return to Cybertron. 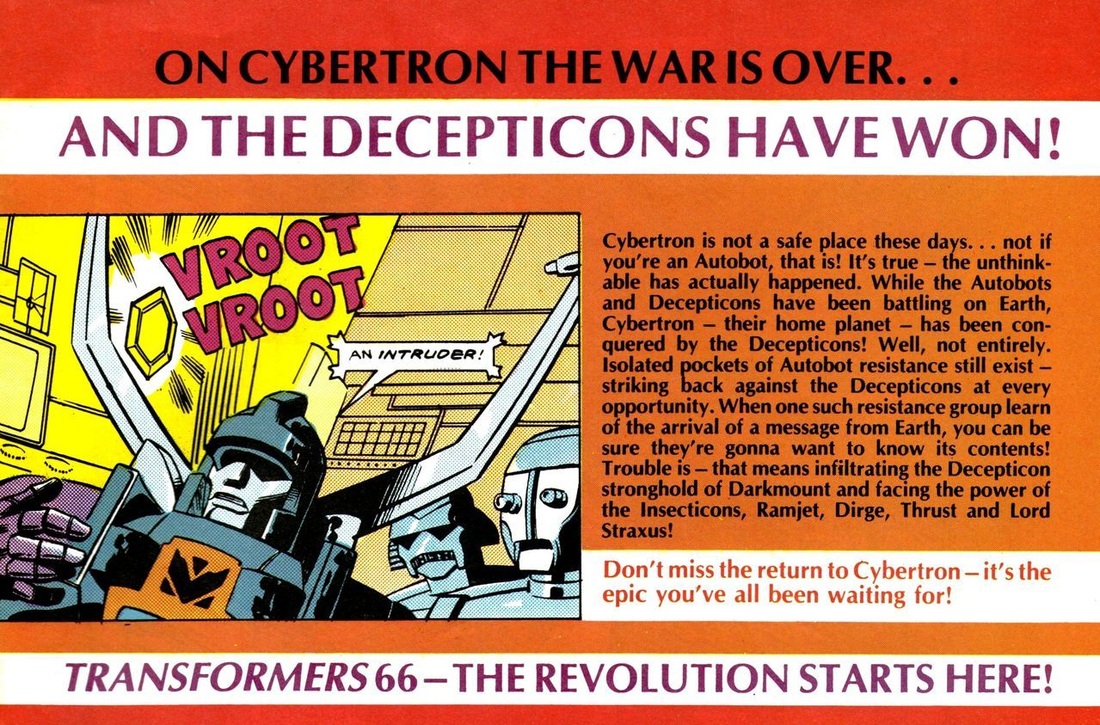 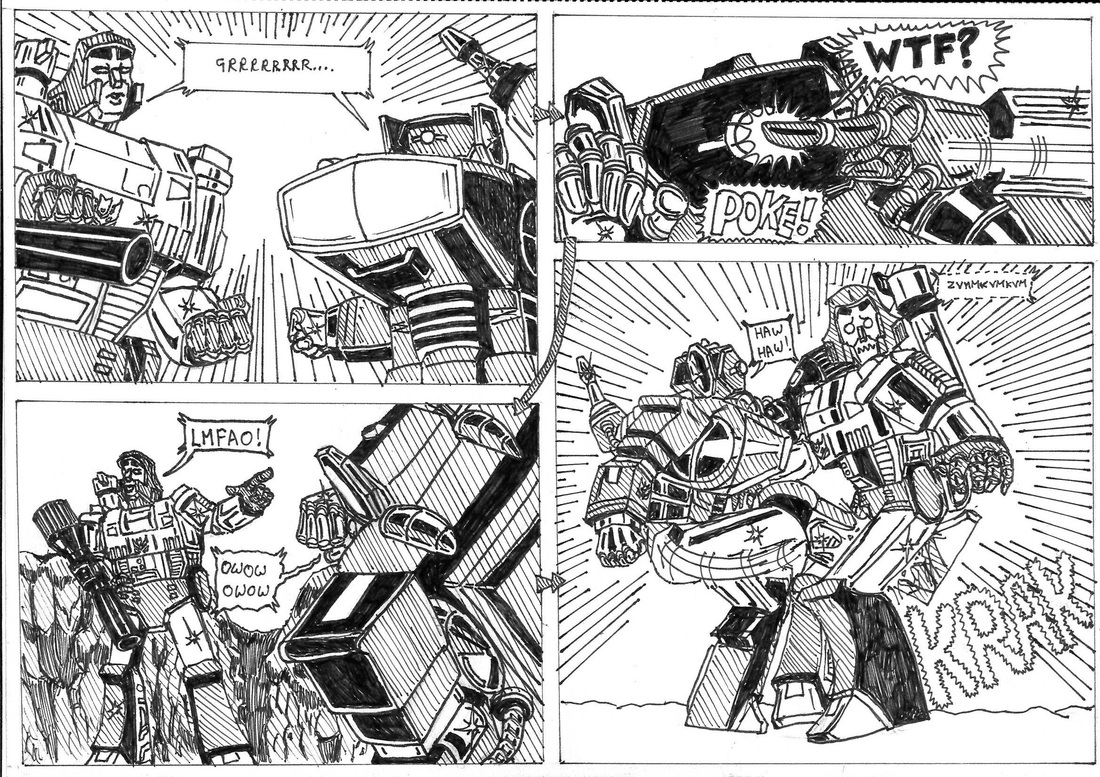