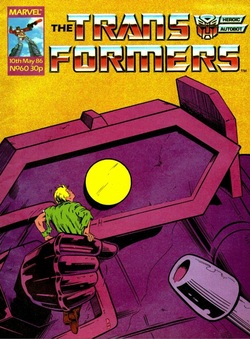 
Were he capable of the emotion, he might feel pity for Buster Witwicky.


Oh irony of ironies. In order to keep Barry Kitson on the book he's been given the chance to contribute to the plot. But at the last hurdle this attempt to sweeten the pot is poisoned by an experiment in cheapness. Now, I'm no artist and have the technical skills of a duck billed platypus (hence I'm still computer-less) so to explain the situation as I understand it in its most basic terms...

The colours in the original British stories have, up until now, been "painted", whilst those in the American reprints were done by a composite method I like to call "Lots of dots". The former allows for higher quality and a wider range of colours, the later is cheaper. As such, and the first step towards the UK switching full time to this method at the end of the year, this issue is a one off experiment at doing it like Uncle Sam. The fact the final result is credited to the pseudonym of T(oo). M(any). Cooks suggests how well it goes here.

Or, to put it another plainly, it's a disaster, especially compared to the more conventional colouring on the issues either side. Yes it's at least on a level with the American stories- though there's one panel of Optimus surrounded by urine coloured Autobots that would make Nel Vomtov go "Whoa, poor block colouring"- but by the best of British standards we're used to it can't cut the muster. It's more than likely that seeing his work treated like this didn't making the idea of keeping on at the toy tie-in coal face any more appealing to Kitson, meaning all the effort put into bringing him round wound up for nought. This will wind up being his penultimate issue (though he'll continue with the odd cover here and there), and it's more than likely he was already committed to 64 before he saw the final result here.

The real irony though, is when the UK swaps over to this method permanently it will actually work out fine, always looking much better than both this and the American series. Considering the painting technique was by far the more popular with the creative teams you might almost wonder if they were deliberately not trying very hard to get it right in the hope that course wouldn't be pursued.

Still colouring aside (and the basic art is good and the cover lovely), this is a fantastic issue that really gets under the skin of everyone's favourite purple one-eyed monster in a way that not only moves Shockwave up to the next level as a character, but will also define him throughout the rest of the series. From his point of view, there is no more important issue. The big cliff-hanger back in 8 made him a bad ass, this puts all the layers on top of that which are needed to make him really interesting. 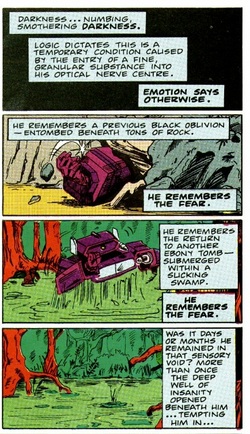 That sinking feeling.
The framework for this development continues the Boys Own Adventure theme of last week. Buster has spent a night running away from Shockwave, using all his Wheeljack given abilities to try and stay ahead, with minimal success. Also continuing the subversion of those adventure stories there's no cunning victory for him to be had, his entire plan depends on just trying to stay alive long enough for the Autobots to come save his sorry ass.

For all the weapons and dodahs built into him, it's something as simple as sand that lets Buster really hurt Shockwave. In theory the idea that throwing dirt in a highly sophisticated optic sensor could cause it serious trouble is mildly ludicrous, but it's not the barely noticeable injury that causes the Decepticon problems, it's the memories it stirs up.

This is where we come to yet another great example of Furman spotting something interesting in Budiansky's work that hadn't properly been followed through on and making the most of it. Shockwave spent four million years in a tar pit, and was only free for a comparatively microscopic amount of time before being buried in a swamp. That suggests all sorts of potential issues lurking under that veneer of logic, and Furman has great fun here exploring them.

What is made very clear for the first time is Shockwave is not emotionless; he uses logic to cap a volcano of emotions ready to bubble up and burst at any time. As that slips as his brief blindness reminds him of his entombments we get to see the frankly terrifying, rage filled character so scared of his past he'll hunt Buster down and kill him beyond all logic just for reminding him of it. It's brilliant writing, and impossible to read now without hearing SHOUTY Spock from the new Star Trek films.

The focus may be very much on Shockwave, but Buster gets good material as well, again probably the most in-depth he's had to date. Alone he's scared but pragmatic, when faced with Shockwave he puts on a show of false bravado (and when he fires all his weapons at once actually knocks over his foe) before winding up absolutely crapping himself when Shockwave actually gets his hand on him. Rather nicely, and again subverting the form, when he is actually rescued he realises his mistake in trying to be a hero and promises to not be a dick in future. 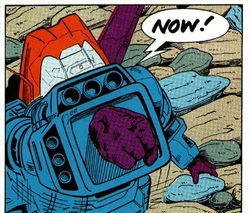 Buster-power.
When Optimus and his streaky yellow friends turn up, the Autobot leader also gets a nice, albeit brief, scene where he faces off against Shockwave in a cold, calm fashion and offers Shockers the logical way out by having him give up Buster in exchange for his own freedom. All in all, this issue is just chock full of nicely observed character moments.

But that is not the end though, for the sting in the tail is Shockwave "Logically" (though of course, it has more to do with him finding an excuse to continue to vent his frustrations at the human) deciding their fondness for Buster is the Autobots weakness, and he will exploit that to the full. This will carry on into next week and the full on wackiness of the Special Teams tie-in.

You can tell this is a good issue as Transformation talks entirely about the main comic for what feels like the first time in ages. The sidebar meanwhile gets to be excited about a three issue competition in conjuncture with the good old Cadbury's Wildlife Bar. Every week there's going to be a cut out jigsaw for you to put together, which will reveal one of the six animals on the front pack of the chocolate bar. Name them all and write the best tie-breaker of what and why about your favourite animal and you could win some amazing Wildlife Bar related prizes. I get the feeling that this is aimed at the younger readers as, despite being no Terry Nuttkin, I didn't need to cut out the six jigsaw pieces to recognise a Panda when I see one. 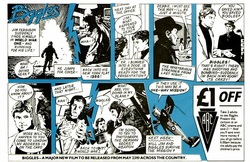 I will make this site the definative Biggles movie comic archive.
Soundwaves features the first mention of future letter answerer Blaster in the comic as Juha Cowdrey from Huntington had seen him on sale in Germany (presumably he was released there first to make up for the country being carved in two like a roast, or maybe to taunt the communists looking over the wall by showing them how awesome capitalist funded toys could be). Soundwave also has a new bane of his life, as the first letter asking about differences between the sticker album (which took the cartoon as its basis) and the comic comes in.

Rocket Raccoon continues to be delightfully off its head as the Red Breath claims its first victim, but let’s face it, there's only one comic you all want to know about: Biggles! Slightly oddly Peter Cushing no longer looks anything like Peter Cushing, but I'm still deeply pleased at the promise of at least one more part. Wouldn't it be wonderful if they adapted the entire film, thus saving me the need to ever track down the DVD with its inevitable 20 years later let down?

Plus, it replaces Matt and the Cat this week, so I'll be bally well reprinting the entire series here, even if it goes on for 100 more issues.

Next week we get the Constructicons back, just in time to become yesterday's news. Though at least they get to end their time as the book's only combiner by lending their gestalt name to a fantastically bad punning title, which is all it takes to make me happy. 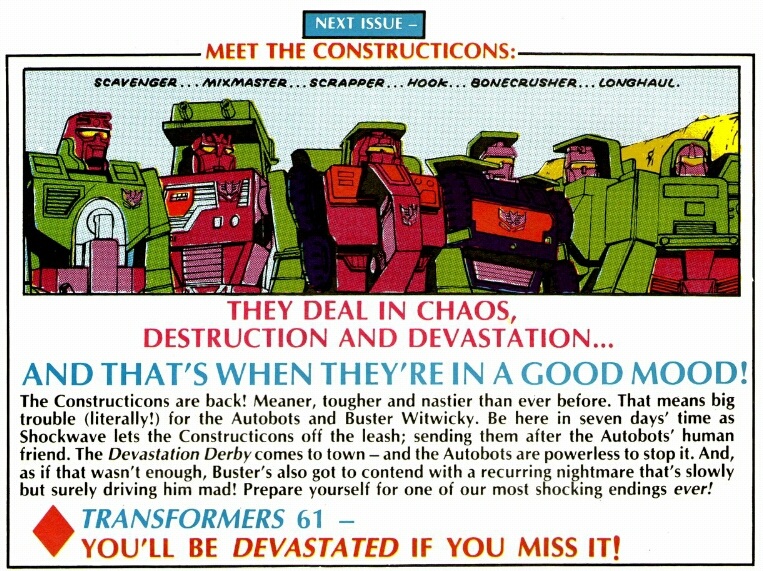