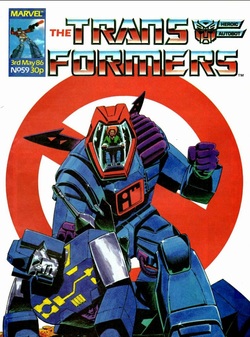 
The ongoing saga of my computer continues, and once again I'm not 100% sure when this will reach you gentle reader. That's also why I haven't been responding to comments on the blog for the last two weeks, but rest assured I am reading them.

But, in a seamless transition, the first part of our new story is the final part of another ongoing struggle. One of the big differences between how the Marvel comics worked in comparison to the post-Dreamwave era is the former was writer led whilst the later, mainly thanks to super-star Pat Lee, was perceived as artist focused (though the last year has seen that change).

The difference is of course due to the fact that the Marvel era mainly just used two writers but an ever changing roster of artists, few of whom stuck around for more than a couple of years. This creates the impression that they were merely in a transitory position, with little control or influence on the book. On the other hand, Dreamwave was not only run by the company's main artist, but most of the focus for both them and early IDW was on the person holding the pencil. "Fan favourites" like Don Figueroa and Guido Guidi would get more attention than pretty much all the writers. Can you, without checking, name who wrote the original Dreamwave mini? Or Megatron: Origin? 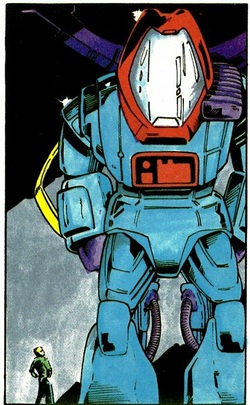 Suits You Sir.
We've already seen Barry Kitson is the main go-to guy in this period of the title's history, getting the big juicy issues and being used as often as possible. The problem is Kitson really didn't enjoy drawing robots and would much rather have been working on 2000 AD (which will become a recurring problem). This story is basically a last ditch attempt to keep him interested by, for the first and only time anything like this will happen on the original book, giving him a formal plot credit and letting him come up with the sort of story he wanted to tell. This, unsurprisingly, winds up focusing on a human more than the robots.

This attempt to keep Kitson happen will fail (and the fact the story has a title that, though presented last week as a Ghostbusters spoof, is very close to that of the 2000 AD strip Robusters kind of suggests where his heart really lied), and considering the story already has the unenviable task of putting in motion the Hasbro mandated Special Teams storyline it really should be a bit of a cluttered mess.

So the surprising thing is how enjoyable it is, mainly because it takes a tired old cliché and does something different and fun with it. The idea is straightforward enough, Wheeljack and Ratchet have made Buster a battle suit that he can use to protect himself if the Decepticons attack whilst he's hanging out with the Autobots, but Optimus Prime refuses to let him use it due to the danger. So like all children in adventure fiction Buster goes to prove himself by scouting out the old Decepticon fortress, where he comes across Frenzy cleaning the place out and actually manages to best him in battle. But the little tape wasn't alone, and now Buster must face Shockwave! 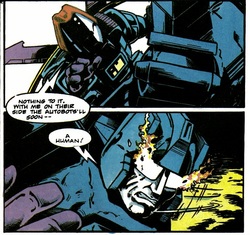 Pissed off Frenzy.
On paper it's all standard stuff, the sort of thing any kids’ series does at some point. What makes it work is the subversion of how things are normally done. Optimus Prime isn't just the typical grumpy authority figure not letting their chid friend have any fun; he explodes in genuine anger at the stupidity of Ratchet and Wheeljack. This is war, not The Famous Five and both have actual important things to do like repairing the Ark and fixing the Dinobots. It's a fantastic scene, and Buster's response pointing out all the things he's done for Prime is nearly as good and again moves it beyond Boys Own stuff.

What's also good about this story, and almost certainly Furman's contribution to the plot, is how Shockwave is written. As we learn from Frenzy all his logic can't help overcome the fear he's feeling at the return of Megatron. It fleshes out the other Decepticon leader, and this idea of his strong sense of fear bubbling under the cold exterior will go on to be an important part of his UK characterisation, and will be the root of his mistakes in dealing with the future Decepticons over the next few years. He also gets a fantastic closing line as he declares Buster's success against Frenzy has earned the human the right to die at the hands of Shockwave!

If there is one flaw here, it's the portrayal of Buster's relationship with the Autobots is taken more from Spike in the cartoon that the American comic. Budiansky's version of the character would be unlikely to have his own room on the Ark; if nothing else his Dad would never allow it; and in the US series he's generally less keen to throw himself into danger. But it's only a small niggle in a very well written story. And next week we'll see how both Shockwave and Buster's stories will continue to pay off in unexpected ways. 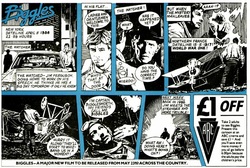 Biggles!
As far as Transformation is concerned the Special Teams are still the Big Thing (we also get the first advert for the toys as well), but there's at least mention of this week's story this time and also some promotion for Budiansky's return to Cybertron arc. Plus Robo-Capers actually has a nice joke about Soundwave dealing out justice to Marvel for the misprint back in issue 51.

Over on his own page, Soundwave not only shows how fair and balanced he is by printing some letters slagging off the Decepticons (whilst taking careful note of the writers addresses), but once again reminds people of his training mission with the Constructicons and how we'll see the result in issue 61.

We also get the third and final part of the Who's Who, covering humans. As there's so few regular fleshlings it has to throw in a lot of one-offs as well to fill out the page. Though out of those Joy Meadows would return; whilst thankfully Joey Slick wouldn't.

Matt and the Cat has a weird disconnect from the end of last week that's so odd Kazybird has to actually include a note saying that, no, they haven't skipped a strip, just that a lot of stuff has happened he hasn't bothered to show.

But, whilst Rocket Raccoon continues to be delightfully off its nut, there's another comic included this week that damn near manages to steal the whole issue. It's a short promotional piece for everyone's favourite SF film starring Peter Cushing, Biggles: Adventures in Time!. Complete with cut out coupon getting you £1 off the ticket price at any ABC cinema. The real exciting thing is it promises to continue next week! This is not annoying ironic love on my part, I adore the Biggles film is a slightly wrong way so this little half page adaptation has gotten me worryingly excited. Plus, it's the closest we'll ever get to having Cushing in Transformers.

The great question then, what can issue 60 possibly do to top Biggles? Other than the promise of more Biggles? Well, we get Buster in it up to his neck, and Shockwave working through his emotional issues and a farewell from Kitson that has to struggle valiantly against a new colouring technique. Assuming my continued computer repair attempts don't electrocute me, join me then. 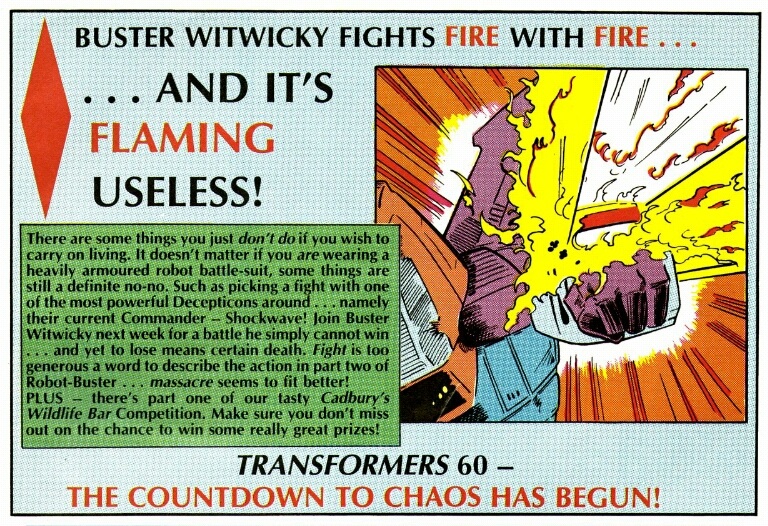