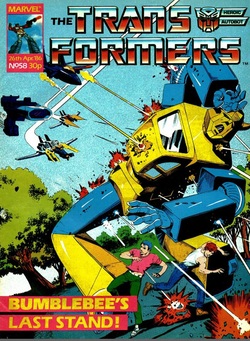 
"Waldo! The flamin' airforce are after us!"
"What? For pinchin' a lousy Volkswagon?!"

There's an air of tension surrounding this week's entry that adds an air of excitement to proceedings that's normally missing from the simple act of blogging about comics. My PC, the only one of my devices I can actually edit the site on, has broken. It is an ex-computer. At the time I'm writing this on my tablet I have no idea when you'll actually be able to read it (though I am attempting an ad hoc solution that might see this still go up on Friday).

[UPDATE: Amazingly I have managed it. The pictures may look a bit different to usual though, coming through my tab via Facebook into Photobucket. God bless the British library system]

All of which raises one of the great philosophical questions of the age: If a man writes three pages on a 1986 Transformers comic and no one reads it, does it really exist?

Still, it's lucky that this happened in a week where I desperately needed something to add a couple of paragraphs in order to pump up the length, because otherwise the pickings are pretty slim for an issue where, after a promising start in the first half, things implode in a puff of disinterest.

The second part is somewhat odd in that there isn't really enough going on to justify the full 22 page length, whilst at the same time various aspects are so under-explored it almost feels as if it needed a couple of extra pages to properly develop them.

As mentioned, the plot is slight. As Bumblebee continues to be used for a joyride the Decepticons attack; he decides to stand and fight for his human friends and just as all looks doomed the Autobots turn up and save his sorry ass. It actually takes slightly less time to read than the preceding sentence does.

Amidst this, there are several ideas that are just sort of skipped over. Most obviously the ones set up last week in that we never find out what was so essential to Shockwave's plans about Bumblebee (and as a fill-in, this will never be mentioned again) and Bumblebee's angst about his place in the Autobot army is completely unresolved. If anything his sense of worth should be even lower as he does nothing to resolve the situation and is entirely dependent on the Autobots to save him, getting Jetfire bitch-slapped in the process.

It is however mildly funny that Bumblebee chooses to try and save his human friends over Jetfire (though failing in the attempt), as the next Christmas story will make a big deal of Jetfire himself making similar choices because he's special for having been built on Earth. 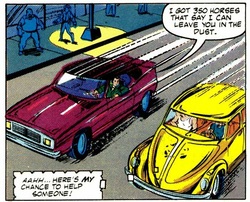 How to make friends.
There's also a brand new unresolved plot that was only touched upon slightly at the end of last week, Bumblebee's pally friendship with his human stealers. Now, there's some potential in this set up, indeed it's almost exactly the same way Sam came into contact with the 'Bee in the first Bay film (though he brought the car from the lot rather than stealing it). But Ernie and Waldo are hugely underdeveloped, and the fact the first thing they do is nearly run over some pedestrians takes them from unruly kids into complete bastards territory, meaning you kind of want them to die horribly.

What's also odd is Bumblebee's attitude to them. With no time given over to setting up a relationship his randomly deciding these two douche-bags (who after all, have kidnapped him) are his new bestest friends and he'll do anything for them comes over as nothing less than full on Stockholm Syndrome. Presumably if the Decepticons hadn't caught up with them he'd have gone all Patty Hearst.

The fall off in quality after the fairly solid opening is a huge shame. Even the art isn't as good, the fight scenes being much more stodgy and uninvolved. It seems the artist shoot his load with the attack on Bumblebee last week (so good it inspires the cover here).

That's not to say however that things are outright bad, just that the whole thing is easily the most throwaway and forgettable issue we've had in some time. Budiansky's last few stories were fairly poor, but you're not going to forget the facepalms they induced and if nothing else they moved the ongoing plots along. Plight of the Bumblebee! will slip out of your mind almost before you've reached the end of the NEXT box.

This is clearly something Editor Ian Rimmer agrees with. We've had Transformation pages before that were clearly more excited about free gifts, forthcoming stories and the weather than the main story but this is the first time it doesn't warrant a single mention. Instead the main part of the page is given over to a grovelling apology to Lew Stringer for the misprint on Robo-Capers back in issue 51. Now, I love Stringer for Combat Colin and this was unfortunate, but it does seem more than a bit over the top. Especially as the corrected reprint here basically saves him a week’s work.

The side-bar promotes the Arrival From Cybertron video in what can only be called a grudging way. It has to big up the tape through gritted teeth whilst being careful to point out it's full of inaccuracies in comparison to the "True" story (in other words: Please kids, don't start writing in again). 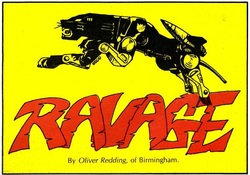 Fan art of Ravage.
Soundwaves is unusually dull this week, basically just repeating the information about the video and the Robo-Capers mistake, just a dozen pages after the opening page did so. It creates the sense they didn't have much in the way of interesting letters on other subjects that week. Though the Your Choice! section (a little sidebar where people send in their favourite cover/story/fact-file ECT) is mildly amusing for Daniel Cook of York declaring Decepticon Dam-Busters his favourite story. A distinct lack of taste there Danny-boy, though if nothing else you're going to love that video.

One mildly surprising thing about Rocket Raccoon (onto the second issue of his four part mini-series now) is the character of Blackjack O'Hare, whom I mentioned two weeks ago, wasn't just a one-off piss take but has become a major villain. Bill Mantlo must have really been annoyed by Bucky O'Hare to almost Danny Fingeroth levels.

There you go, one of the shortest entries I've done for a while (assuming you ever get to read it), but there's not really anything else to say.  Next week we return to the UK stories and the build up to the Special Teams, though first we have what I like to call Operation: Keep Barry Kitson on the Book. 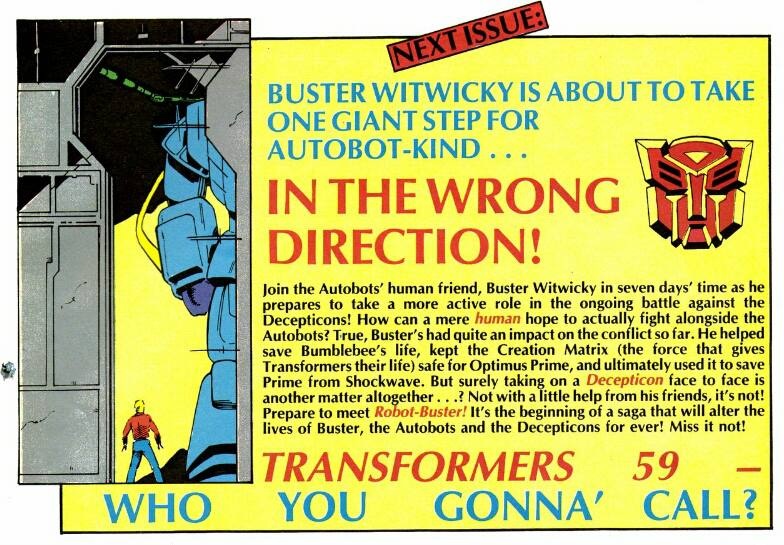