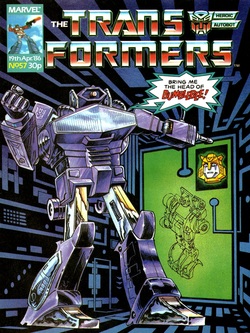 
If there's one sentence that strikes fear into the heart of this comic book reader, it's "Fill-in issue". That is to say, something not by the regular team that's been thrown together quickly due to a looming deadline, to cover a holiday, to help the usual writer out or to keep the book on schedule through some other crisis. More often that not they break up the current story-lines, feel completely disconnected from the rest of the series and you can usually tell they've either been written in haste or kept for years behind a little glass window bearing the legend “Break in case of author breakdown”.

Plight of the Bumblebee has another black mark against it before it even begins, because this otherwise overlooked issue is only really remembered for one thing, and that's one thing it isn't. It isn't written by Peter David. The one day Dark of the Moon novelization writer (oh, OK, and extremely successful well regarded comic and TV writer) produced a script that was intended to fill this slot whilst Uncle Bob took a somewhat needed break, but delays on art and the evolution of the toy-line ended up seeing it replaced. Today even the script doesn't exist anymore. So what we get instead in a fill-in for a fill-in. And compared to the amazing Peter Davidesque story your imagination can conjure up, poor old Len Kaminski was probably doomed from the start. 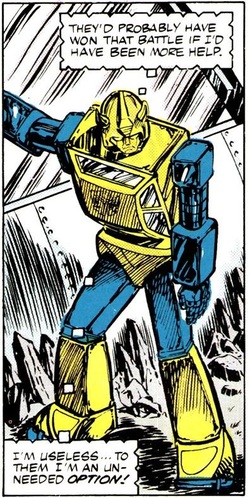 Sucks to be you.
We'll never now know if David's effort would have been any good (though he has decent form with licensed properties, his Star Trek comics from a few years later were excellent), but to beat out most of what we've had in the last few weeks it wouldn't take much.

Both the fear of fill-in and the longing for David actually do this story something of a disservice. It's worth noting that fill-in issues are actually surprisingly rare on this book (especially when compared to, say, Hama's G.I. Joe). They'll be two more instances during Budiansky's run on the American series- of which only The Big Broadcast of 2006 will make it to the UK as the other was Man of Iron being presented to our colonial cousins for the first time- and Furman will get some help from Dan Abnett around the late 100's but other than that, almost everything we're going to see from now on will be by the same two authors.

In theory that should be a good thing, providing a consistency across the entire run. But just look back at the last few American stories and decide if the clearly running on vapours Bob could perhaps have done with a holiday sooner. Or look ahead to the black and white era when Furman's concentration was obviously often divided between his home and away work and wonder if just one other writer occasionally filling in might have spared us Irwin Spoon.

This is all a long winded way of saying this story is much better than you might expect, especially as Kaminski likely had to knock it out extremely quickly. It's light and frothy and won't win any awards but still rattles along at an impressive pace and has a surprising amount of charm to it. Unusually for a fill-in the characterisation is fairly spot on as well, even if pretty much taken wholesale from the profiles.

The main weakness is how much the whole thing runs on coincidence, Shockwave decides that Bumblebee is the weakest Autobot and is essential to his plans... For some reason that never really becomes clear. Amazingly, at exactly the same time Bumblebee decides he's useless to the Autobot cause and strikes out on his own. What are the odds? Incidentally, the similarity to Crisis of Command in the Bumblebee scenes gets a pass as Kaminski would have been unaware of it.

D.I.S.C.O
The result of all this is a surprisingly well executed running battle over... Wisconsin? The sudden movement of the state the Ark is in is one of the few signs of a rushed production (along with "Mount St. Hillary"), but the battle as Shockwave and the other airborne Decepticons try to capture the little yellow fellow is still nice and dynamic with some lovely pained art from Graham Nolan.

With Bumblebee damaged and his radio broken he goes to hide in a used car lot, and his luck gets even worse as a couple of small time car-jackers break in and steal him for a thrill. Here, the similarity to the "Rubbish crook gets hold of a damaged Transformer" plot of Shooting Star! gets less of a pass. Especially as it sends up a warning signal that the second half of the story might not be as good as the first.

But that's conjecture for next week, suffice to say here we do at least get another decent faux cliffhanger as the Autobots learn from the TV news of Bumblebee's plight and Optimus strikes a dramatic disco pose whilst ordering them to the rescue. Despite the fill-in nature of this issue, it's easily the best American story we've had since the end of 1985 (four months ago at this point). Lets hope things don't go all Joey Slick in the second part.

The Transformation page only has one thing on its mind, and it's not Bumblebee. The build up to the Special Teams is still getting Hasbro...err... The editorial team really excited as they lay out the forthcoming stories that will give us the pre-emptive introduction to the new combiners. Though it's perhaps telling that the writer (Ian Rimmer?) is clearly much more interested in pretty much everything else happening those issues rather than the main event. Even the return of Jessie feels like it's announced with more enthusiasm that the dawn of Defensor. Soundwaves also joins in by having the letters page host drop hints about how he's weighing up his loyalties to the two prospective Decepticon leaders, something we'll see paid off in issue 65.

There's also a really odd Robo-Capers with a strange nonsensical punchline about a super robot warship winding up parked in Woolworth's (Peter Kay: Woolworth's eh, who remembers that eh? Pick'n'Mix eh?). Utterly baffling. How long till Combat Colin turns up and saves the comedy strips? Still, as a saving grace, we're spared Matt and the Cat this week. 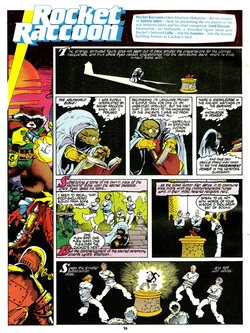 The new back up recap boarder.
Rocket Raccoon not only confirms the spelling of his ship as the "Rack'N'Ruin", thus exactly the same as the future Wrecker, but introduces a surprisingly late in the day addition to the back up stories. Up till now the comic has somewhat struggled to include a recap of the cut into pieces second stories, sometimes finding room for it on Openers (remember that?), recently by cutting down on Soundwave's space (puttup!) and often by not including one at all.

Here though, things get standardised. As happens with the second half of every American lead strip, the opening page is now cropped with a boarder that includes a logo, a recap and some nifty Rocket Raccoon art down the side. It's a small detail, but one that makes the story feel less like a whole broken up and creates an overall more professional feeling to things.

Though it was first advertised last week, the essay there was already over-long so instead I'll mention here the advert for the Arrival From Cybertron video. Not only is this a more snazzy title than the "Official" one of More Than Meets the Eye Parts 1-3, this first British VHS is going to be part of a range that will be hugely important to us young fans and a most welcome way of shutting us up for an hour as far as our parents were concerned. And all for only £7.99. Albeit an amount that would probably buy you the entire first season on DVD now (Peter Kay: VHS eh, what was that all about, eh?).

Next week, Bumblebee's plight sees him take flight as he seems to start suffering from extreme Stockholm Syndrome. 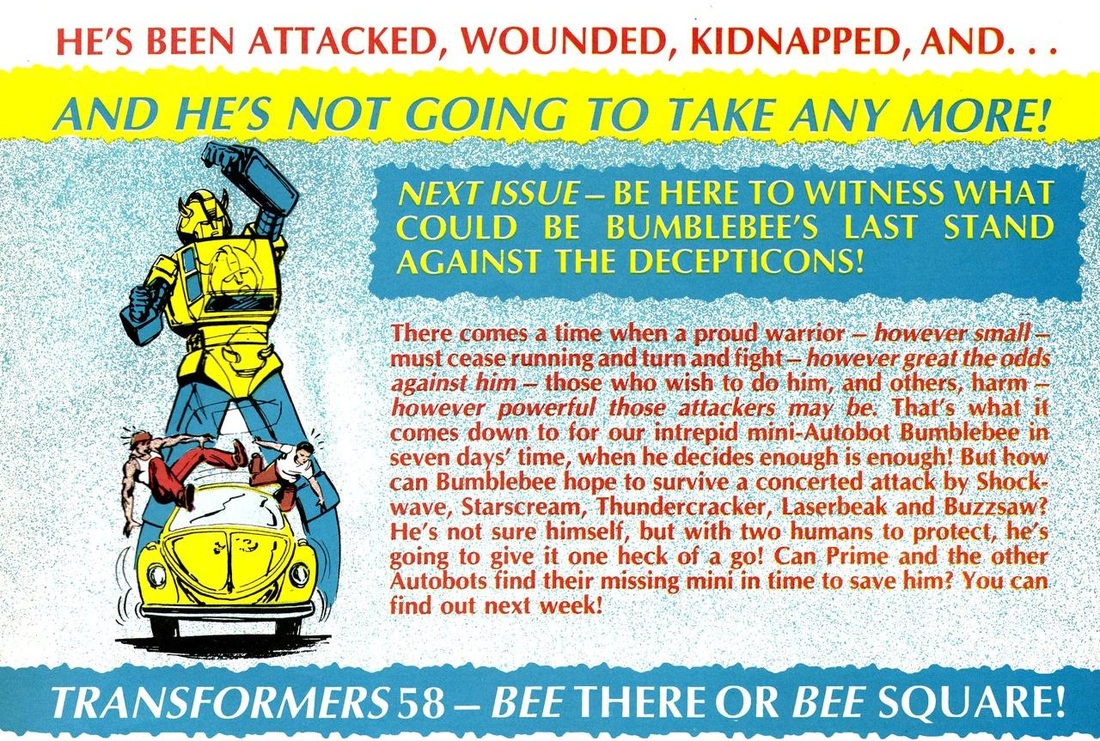