...And What I Am Needs No Explaining! 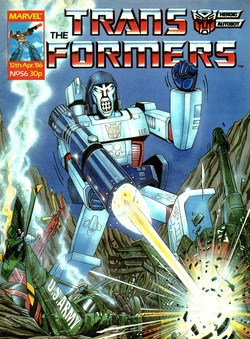 
For that remark, I will crush you into protoplasmic pulp fleshling--when I can move again!


Since I laid into the first part of this story last week, I've purchased and read the 8th book in the IDW Collection series, containing both Heart of Darkness and what can only be described as the fart end of Mike Costa's run on the book. Coming back to the world of Robot-Master after all that, it's almost inevitable I'm going to be better disposed towards this simple little story of Uncle Bob's.

Hell it scores over Costa's work off the bat in one very important way: Costa's stories, even his better (i.e.: Forgettable) ones work entirely on one surface level only, he has one idea an arc and explores it in the most superficial way possible. Prowl investigates the fact that Spike may have done a crime... which he did do. And which the audience already knew he did.

That means that the very thing I mocked last week- the piss take of Danny Fingeroth- allows the comic to work as more than just a story about a man claiming to control the Transformers, there's that little bit of extra depth. And this is one of Bob's weaker stories, but it still shows more sign of getting how to structure an issue than anything by Costa, a man with a tendency to give his issues overly pretentious titles stolen from "Proper" science fiction stories suggesting he thinks he's doing something much better than he could ever hope to be.

Of course, none of that means this isn't a very odd issue. The very second scene- after the Autobots set out from the Ark to where Megatron has broken down- is one of the strangest things we've seen yet. A high street electronics shop (oddly run by a man who looks exactly like G.B. Blackrock when he has the 'tache) is selling a tape deck the aforementioned owner found outside on the street. Which amazingly, turns out to be Soundwave, who releases Ravage before the two of them get picked up by Laserbeak and Buzzsaw. 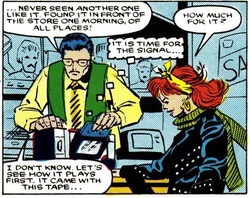 "No, honestly, I'm not Blackrock. Or Stark".
It's utterly bonkers and makes no sense on any level. Why is the store owner boasting of selling what he must think are stolen goods to his customers? Why not test it before he puts it out to sell? Why is Soundwave hanging about on street corners anyway? It's something that makes my eyes bleed frankly.

Luckily, his purpose after this odd bit of padding is to go revive Megatron, and not a moment too soon. Soundwave turns up at the mine after Barnett and Finkleberg have arrived to set up their new terrorist video. Also present are G.B. Blackrock (re-establishing he's the only non-idiot human in the current storyline) and Optimus Prime and his team of Autobots. The later approach peacefully and refuse to respond to extreme provocation, so naturally the U.S. Army blast the living shit out of them.

Prime actually comes over very well here, caught between a rock and a hard place he keeps his troops under control and avoids the potentially disastrous in the long term obvious reaction of fighting back against the humans. He also has enough sense to know when to retreat after Megatron is reactivated by Soundwave.

Megatron is also written brilliantly, utterly petulant and miserable at his lot, he spends the entire issue whining and moaning in the most entertaining way, just desperate to kill something and being very upset when Soundwave comes up with a perfectly good reason to keep "Robot-Master" alive. Once again, he shamelessly steals the entire issue like the complete cad that he is. 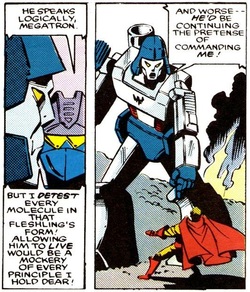 The Diplomacy of Megatron.
That just leaves the humans to let the side down. Lets not forget that Triple I admitted last issue they think there's a possibility the good robots/evil robots things is true but they just don't care. But even if they're not interested in it as a cover story, the troops on the ground having orders to blast every giant robot, even ones claiming to come in peace and not doing anything threatening, is deeply stupid on every level. It will only encourage the previously harmless robots to also become aggressive against humanity.

Not to mention that, as Megatron ably shows here, if Optimus and his fellows had responded in kind it would have quickly become a human massacre. What on Earth is the logic there? All Triple I have managed to do across their first real effort to deal with the robot menace is spend a lot of money on Donny and the Robot-Master scam, before letting him get captured by the Decepticons, so they can carry on using him as a propaganda machine to stop the Autobots making friends. Way to go Triple I.

The final bizarre thing in the issue is the decision to have Donny be a smoker even though, even as long ago as 1986, it was clearly unacceptable to portray cigarette smoking in an uncommented upon way in comics (at least one aimed as young as Transformers). Presumably this is because Fingeroth was a heavy smoker and this is all part of the hiiiiiiiiiiiiiiiiiilarious twisting of the knife from Budiansky. But this attention to detail means we wind up getting Megatron, of all characters, displaying disgust with the habit in order to emphasise to the kids that smoking is real bad, M'kay.

So is there anything else to enjoy here? There is a certain black irony to be had reading in retrospect from the post 9/11 world. American attitudes to terrorism have changed so much in the last quarter century it's almost impossible to read it now without thinking of the mad conspiracy theorists who insist the attack on the World Trade Centre was an elaborate hoax and all those videos from Bin Laden were CIA fakes. Maybe old Osama was just really Frank Miller in a bushy beard?

There are a couple of interesting tidbits elsewhere this issue. The first, and most minor, is the first birthday of Robo-Capers, which celebrates with a special strip. More exciting is, as we're now into spring, we get the next lot of collected comics. It'll be many months before I get round to talking about the 1986 specials, but suffice to say both Transformation and a full page advert are very excited by the reprinting of the first U.K. story in full colour for the very first time. Once again it's presented as a piece of ancient history, and I'm sure the kids were just as excited for it as they were for Zoids and The A-Team. 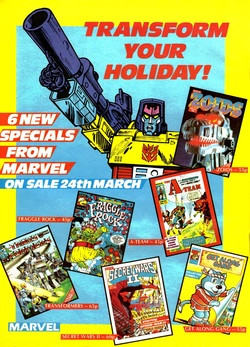 Someone in the office really like that Megatron pic.
The real meat comes, as always from Soundwaves, where the communications officer takes time out from his Jeremy Beadle style pranks on shop-keepers to create his own little micro-continuity. Jonathan Kelly from Chelmsford asks who had the Matrix before Optimus Prime, to which the answer is given to be a character from And There Shall Come A Leader: High Councillor Traachon (puttup!). This is a revelation that will not be contradicted for more than two hundred issues, until we get the full list of prior Prime's and thus the creation of Sentinel Prime in issue 290, more than four years from now.

This may seem a minor thing, but lets not forget that the Matrix was, and will continue to be for a while longer, a big part of the American stories and the introduction of new characters. The likelihood of more back-story being given to it that would disagree with this were fairly high, even if it never came to pass. The fact that Furman, playing Soundwave, felt confident enough in this small way to throw his own mythology out there- and that both Hasbro and Marvel approved it- is the first tiny, tidily step towards him using this backwater comic to create what is now the Official Approved Origin of The Transformers.

It audacious and unprecedented. To look at the other BIG Marvel UK licensed title, absolutely nothing in the British Star Wars stories added anything to the mythos in the long term, however good they may be. You won't find the entire plot of the seventh film developed from the letters page. The obvious, safe, answer to that question would have just been too go “I don't know” or “That's a mystery”, or to use the Soundwave gimmick to give a joke response. The fact Furman put proper thought into it, shows a writer with real ambition to do more than anyone else would likely do in that position, and that is going to pay off handsomely.

Meanwhile, Rocket Raccoon follows in the footsteps of the Wreckers team featured in Machine Man of 2020 by introducing a name that Furman will clearly take a shine to. It turns out Mr. Raccoon has a ship called the Rack'N'Ruin (also spelt Rakk'N'Ruin, but whichever one is the typo it's the former that really caught Furman's eye). We'll see the full impact of this later in the year.

One final thing to note is that the cover isn't a slightly mad expressionist take on Megatron, his mouth actually does that at one point in the comic. Perhaps he's not quite pulled off his Emirate Xaaron impression party piece?

Next week we don't get an issue written by Peter David, but do get Bumblebee running off on his own again. 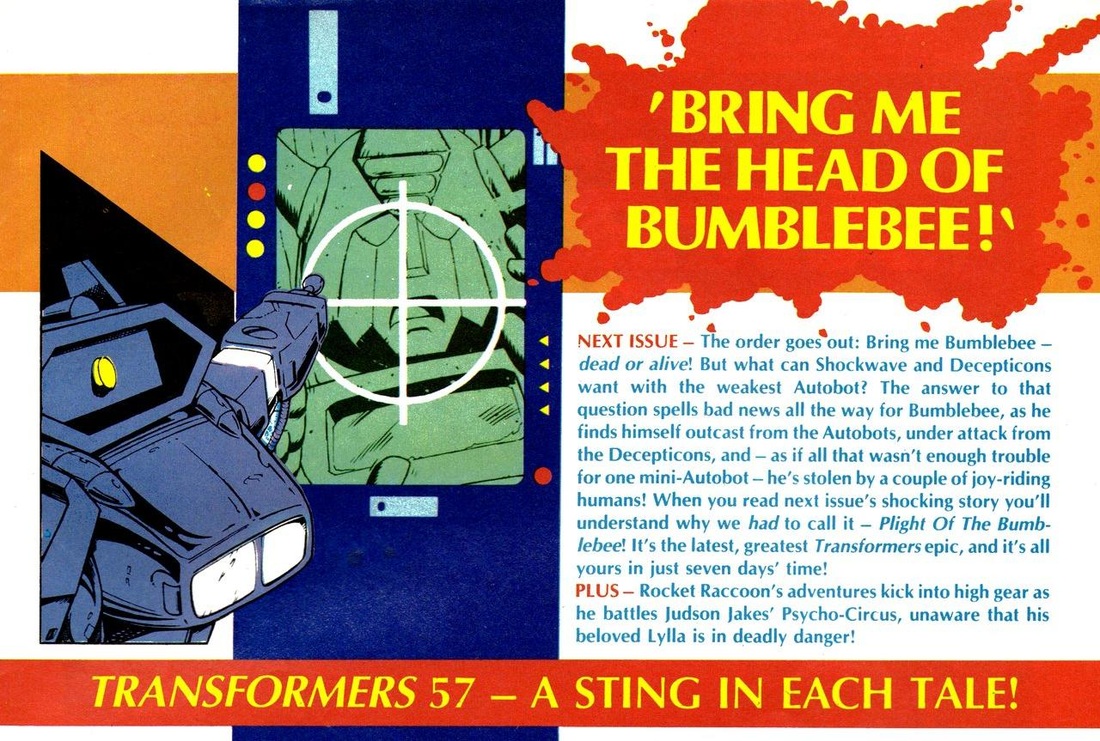