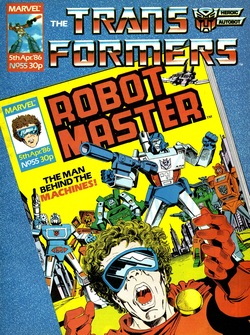 
More importantly, what is his reason for making such a foolish, patently false claim over supremacy over the Transformers?

There's a fair argument to be made that TV shows (or films, books or comics) that do stories about the wacky goings on behind the scenes at a TV show (or film, book or comic) are only really of interest to people who work in TV, films, books or comics. There are exceptions of course, such as those YouTube friendly Patrick Stewart sees everything style moments in Extras, but often there's an inherent masturbatory quality to such stories.

A lot of it coming from the fact that people who haven't done any work outside the entertainment industry in years are often mistakenly under the impression what they do is much more interesting and exciting than what anyone else does by a considerable margin. Even though the same sort of work dynamics, bitchiness and stress are present in pretty much every walk of life. Effectively behind the scenes stories are often the equivalent of, for example, me cornering you at a party and telling many, long involved stories about Tesco Kidderminster and the wacky hijinks that go there even though you don't know any of the people and really couldn't give a toss about the cups in the canteen.

This week's story, is to all intents and purposes the Marvel comics equivalent of this. Indeed, the injokery is even more specific than normal, with new recurring character Donny Finkleberg not only being a failed writer at the House of Ideas, but a very specific spoof of one member of staff: Danny Fingeroth. Who, I would be willing to bet that no one reading this would have ever heard of if not for his being sent up by Budiansky.

So what we have here, if the first half of a 22 page inter-office joke that only people who know- and presumably dislike- Fingeroth are going to really appreciate. I have no idea why Bob thought this was a good idea, nor what Danny did to him that so pissed him off he thought his fellow editor deserved what is a fairly cruel piss take (though his Wikipedia page mentions Fingeroth was a Spider-Man editor, a field Budiansky would later move into so perhaps there was some job jealousy there?). Nor indeed what the man himself thought about being portrayed as a cowardly, talentless money grabbing idiot. Whatever the reason, this is not something that comes across as affectionate or friendly rib poking, but actually quite mean spirited. 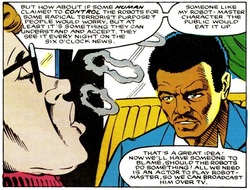 "Hey Danny... you're a dick" basically.
So what is the cause of this insight into the Marvel offices of 1986? The conceit is that, following up his orders from last week (which are basically repeated here in blatant padding), Barnett has to come up with a cover story to explain the robots. Despite some time clearly having passed between issues- as Hoist has now been around long enough to annoy the other Autobots with his regular maintenance checks- he has totally failed to even start to think of anything. And so, in a fit of desperation, he comes up with... Well...

He decides to take his son's rubbish Robot-Master comic as inspiration. Which involves flying to New York, hiring Finkleberg at $25 000 an idea to first come up with the inspiration of getting an actor to dress up as Robot-Master and claim to be an evil terrorist with an army of giant robots; then to actually do the dressing up as the character for a video broadcast and then to travel to Wyoming in order to pose next to the power drained immobile Megatron. All of which presumably goes on expenses.

This idea is flawed on many, many levels and shows very much the thought of mocking Fingeroth came first and the story was twisted around it. Firstly, this cover story is supposed to be more reassuring to the American public than the truth about them being aliens. Now, try picturing the scene, over the breakfast table, of the average American family looking at the morning paper and going "My God! Giant robots are going around killing people! I'm so scared and panicked and... Ohhhhhh they're just terrorist giant robot killing machines? Well, that's OK then. Pass the root beer and bagels". It doesn't really wash does it?

Secondly, Forsythe (who this week has gone blond) spells out that Triple I have been tasked with doing what the military couldn't, and get rid of the robots. That's their mission, and the whole cover story angle has no bearing on it whatsoever. If they were going to work on it at all it should be a fairly low priority compared to actually ending the invasion.

Thirdly, Triple I have absolutely no interest in what their special guest speaker G.B. Blackrock (this week's facial hair status: clean shaven) has to say about some of the robots being nice. It doesn't seem to have remotely occurred to them what the many advantages to the U.S. Government at the height of the Cold War could result from an alliance with super advanced aliens. Hell, even the possibility of offering support to the Decepticons in exchange for technology could be an option. The huge possibilities here are completely and utterly ignored. All in exchange for a two fingered salute from Budiansky to the guy who cut in front of him at the water cooler.

With the main story so weak, it's up to the little details to provide the main entertainment. The opening scene of Megatron attacking a coal mine like a giant demented Maggie Thatcher in his search for fuel before the lack of it makes his seize up is genuinely very funny and nicely over the top. The mine itself is also going to be much more important to future stories than might immediately be the case.

There's also some fun to be had from the Ark based Autobots and their reaction to the completely silly nature of the whole thing as they watch "Robot-Master's" TV broadcast. There's also a nice scene of Blackrock turning down his limo to work in order to drive about in Bumblebee as he explains the plot to the little Autobot. Otherwise though, this isn't the most promising start to both the story and this phase of the comic. We've got close to 50 issues of the adventures of Donny to look forward to. 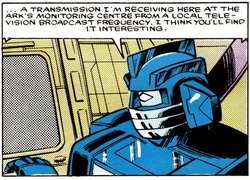 " Hey Yomtov, you're a dick" basically.
In production terms though, there's a big moment here. We've had interior art messed with before for practical reasons (replacing the sitcom Brits hadn't heard of with V) but for the very first time we have an art error corrected by the U.K. team. In the original American issue Wheeljack was at one point in a rather fetching shade of Hoist green, for the Brits this has been changed to a- still not perfect but at least in the right ball park- blue. Why this particular error was dealt with amongst the hundreds and hundreds in every issue/page/panel Yomtov touched I've no idea, but it at least gives me something pretty rare at this stage, a unique image from the comic that hasn't been seen since to include on this page. Thank you Ian Rimmer for making this write up more exciting.

Also, whilst we're more used to the American covers being mucked about with, the editing done here to take the cover on a cover and put a UK style information box with the right date and issue number on it is a very nice touch.

Elsewhere all the usual features are present and correct. Transformation rather obviously finds the whole Robot-Master thing a bit rubbish and Soundwave not only declares he doesn't care about the gender of the kids who write in but also gets to make a decent joke in response to the question "[Has Megatron] ever been kind?" from reader Alaister McAteer in Glasgow. "Oh yes, I've seen him put hundreds of Autobots out of their misery".

I've never actually encountered this character before and was only vaguely aware of him. If asked I'd have probably thought it would be something like The Raccoons, showing a distinct lack of imagination on my part.

It's actually more reminiscent of Bucky O'Hare, which I'm more familiar with thanks to the cartoon, even though the original Bucky comic came out between the creation of Rocket Raccoon in 1976 and the 1985 issue one reprinted here, meaning the flow of inspiration runs in the other direction to what I'd have thought before Googling furiously. Something writer Bill Mantlo seems to be aware of as he includes a wry nod to the green hero by featuring a small role for a black rabbit security guard called Blackjack O'Hare. Does anyone in comics do anything else but make jokes at other people who work in comics?

Still, it's a promising, nicely bonkers opening that- with it's killer clowns and murdered toy makers- feels more like something from 2000AD than typical Marvel. I am now very much looking forward to seeing Rocket Raccoon in the Guardians of the Galaxy movie.

Next week: A public service announcement on smoking. 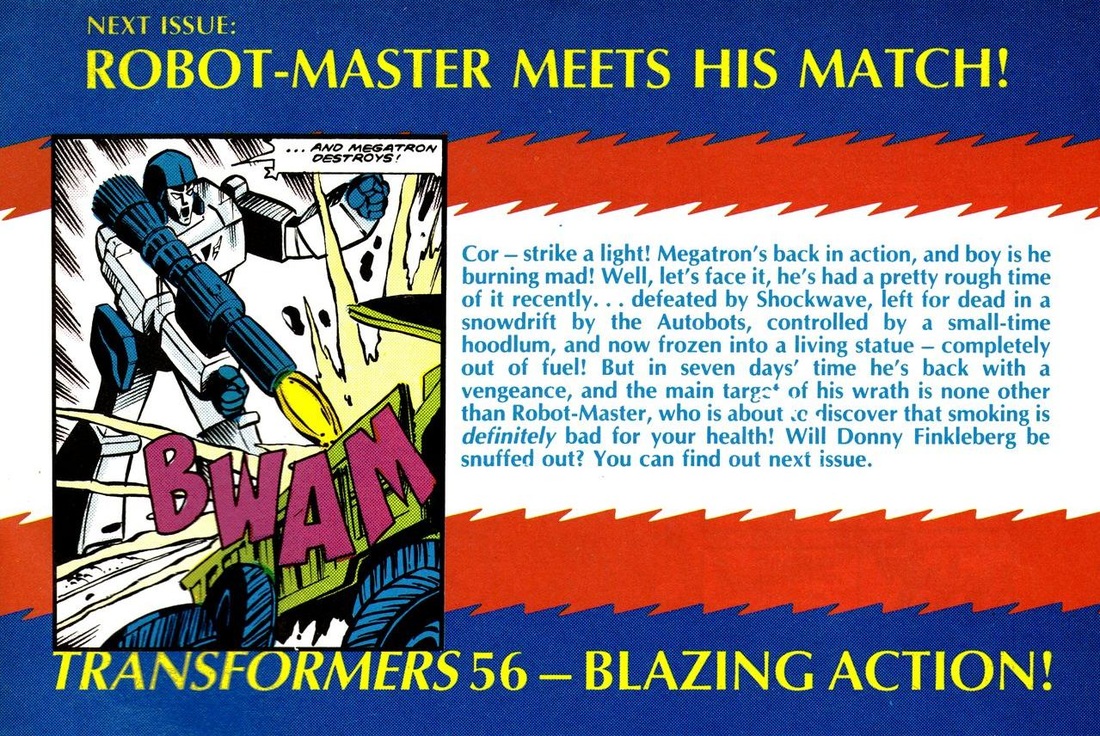