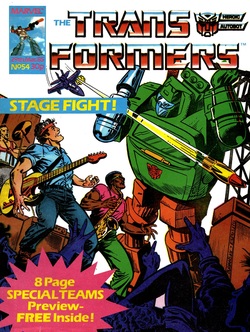 
Y'know Skids, I think sign-reading is too advanced for this training session.


For those of you, who like me, have never had a chance to see the Panini sticker album given out as a free gift two weeks ago, we have regular reader and all round nice guy Snowkatt to thank for scanning his own copy and putting it up on Photobucket to share with the rest of us. It's the Dutch edition, but language aside is identical to that which came with the comic and is well worth a look HERE. Who'd have thought Thrust was such a star?

One of the defining traits of the Marvel comic was it's wide variety of styles. Thanks to two writers with very different approaches and the wide variety of artists the feel of two stories that run back to back can often be quite different. But it's really hard to think of one single story that changes gears in the middle as drastically as Rock and Roll Out! does here.

Which is especially bonkers when you consider the fact this was originally one American issue, reading it in its original format makes the mood whiplash even more severe. Even the spoof name of the Springsteen based rock star changes. So whilst last week we had some interesting exploration of science fiction ideas with a light side order of comedy, here we go into full on heavy handed... Well, I'd say satire but there's so little depth to the send up of rock culture in general and Bruce Springsteen (Budiansky slightly changes the lyrics of some of his songs, it's like he's David Frost) in particular it's almost anti-satire.

You also have to wonder what the target audience were supposed to make of all this, would there have been many 8 year old Springsteen fans were reading the book at this point? It's most likely the alleged jokes went whizzing over their heads at high speed. Based on the advertising hoarding a week later we could have had The Bangles, who may have gone down a bit better.

Outside of the rock concert though there's actually some nice simple culture clash comedy with Bumblebee and the trainees. There's nothing earth shattering, but the scenes of them getting confused by various signs at both a drive through burger bar and the rock concert parking lot are both sweet and get a nice pay off as Bumblebee ultimately decides to hell with sign reading. 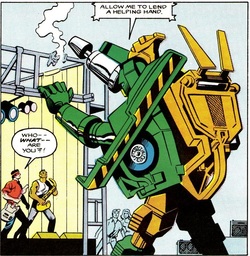 Hoist by his own petard.
The strange thing about Shockwave's plot is how benign it is. By stealing sound energy he's basically harming no one, only causing a decrease in the audio level of the concert that's probably to the betterment of "Brick's" young fans hearing. The Autobots shouldn't so much be trying to stop him as work out how to do something similar. By going to the concert, seeking out the Decepticons secret underground base and engaging in a massive battle with Starscream and the Jets (good name for a song) before Shockwave comes close to killing everyone, Bumblebee is actually responsible for all the carnage that follows. What a git. Optimus lets him off at the end for engaging the enemy, which is somewhat out of character for his usual "Protect all humans no matter what" attitude.

Running through this is a minor sub-plot introducing the main government agency that will deal with the Transformers between now and Uncle Bob's departure from the book: Triple I: Intelligence and Information Institute. This sort of black ops super secret stuff is now very old hat in both fiction in general and this franchise in particular. To the point the Bay films sensibly decided to send the whole thing up mercilessly with Simmons. The fact Furman to this day continues to play such groups completely straight even though they're now incredibly clichéd is just one of the signs he's more than passed his best as a writer.

However, in this pre-X-Files world the idea is still reasonably fresh, and showing how the government reacts to the giant alien robots waging war on their shores is an entirely sensible move. Things also start fairly promisingly as Barnett is called to Washington by his boss Forest Forsythe and told to come up with a cover story that will stop widespread public panic about the robots. Which is again, a sensible move on the part of Budiansky.

It is also however, the one and only sensible thing Triple I will ever be involved with. Starting with the very next issue Barnett will constantly prove he's the only person working for them who isn't a complete idiot as insanely stupid idea after insanely stupid idea is put into place to the point they make Sector 7- who again were played deliberately for laughs- look like a model of competence. Even in their one and only generally better thought through appearance in a U.K. story they still wound up with a brand new built by them pissed off giant robot roaming the country. And that was a good day at the office. 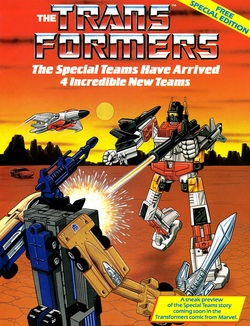 Two covers this week.
With the lead comic somewhat underwhelming, the Transformation page only has eyes for the free gift. With the misadventures of Bumblebee and company not warranting a single mention it's just all about how awesome the free pull out comic is and how much the Special Teams are going to fellate the reader at great length.

The slightly strange introduction of the post-Devastator combiners was, of course,entirely down to Hasbro U.K. Due to the lengthy lead in time to getting the American reprints out to the our tiny island we wouldn't be seeing the Uncle Bob written stories creating those character till the toys had been out for months, indeed we won't be seeing the original début of the Combaticons and Protectobots until early 1987. With there being a big push on the combining toys the result is one of the few times in his Marvel Transformers career Furman will really have his arm twisted to do something very specific.

The results, as we'll see in a few weeks, will show why this lack of outside pressure was probably a good thing as his response is almost petulantly poor, but for here and now this free comic is the opening salvo in the advertising offensive.

The untitled comic is itself just three pages, the rest of the pull out being given over to a cover and a fold out poster of the toys of the four new combiner groups. As such, it's very simple being basically each team turning up at a power plant to say their names and, if their lucky, basic personality traits before starting a fight.

By complete coincidence it's actually quite similar in structure to how the same characters are introduced in the Japanese exclusive (and not seen in the West for many years) Scramble City direct to video cartoon. Even down to the unresolved cliffhanger as the story ends with the fight starting in earnest and the promise the story would be continued in issues 63-65. It won't be, though elements of this will be reused in those issues, meaning this exists in its own little bubble.

Written by Furman with art by John Stokes, it's so different to anything the comic has done before in its stark simplicity and rather basic look it's a little difficult to get your head around it. However, to a certain extent it's unfair to compare it to our regular 11 page dose of robot action. To all intents and purposes this is, years before JaAmM, the first toy pack in comic for the franchise. Yet (and in today's world of carefully planned cross promotion this would seem really strange) Hasbro U.K. would never use it for that purpose, indeed the obvious step of bunging it in with other Marvel comics out at the same time wouldn't be taken either. 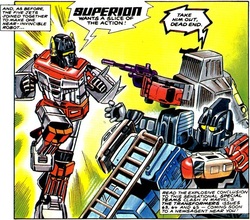 At least Menasor got the name right this time.
However, if you think of it in comparison to those little comics that came with the Unicron Trilogy toys, not only are the similarities very obvious, it also comes off very well. It's light stuff but as a bit of throwaway fluff that serves no purpose other than to go "Cool toys!" it's harmless enough, and as a one off is actually a pretty interesting curio.

As if one free gift wasn't enough, we also get the second half of the Autobots Who's Who, which makes you realise how many of the 1984 cast have been knocked out of action to make room for the new boys introduced in this story.

This week we bid farewell to our shortest lived back up to date, Robotix, which concludes on a THE END... OR IS IT?!?!?!?!?!?!?!?!?!?!?! note (it is). Despite being insanely rushed there's been a certain charm to our new robot friends, and if nothing else it shows what a good job the original first issue of Transformers did juggling those character introductions.

Robo-Capers, Matt and the Cat and Soundwaves are all present and correct, with the later following up on last week's first letter from a grown up by giving us the first on sent in by a sentient tape deck (how did it hold the pen?). The real stand out is the next issue page though, which- for the first time in a while- doesn't have any art from the following story, instead reusing a picture of Megatron from Decepticon Dam-Busters! with a new comedy speech bubble. I'm guessing I, Robot Master! hadn't reached the U.K. office yet and they had to make do. The reveal than Megatron has huge supplies of cocaine on him is mildly surprising as well.

Oh, and a word of explanation for the cover (which is I believe the first Budiansky drawn one), the UK have cropped the top of the image to slap the logo on, meaning that what was once a drawing of Hoist gallantly grabbing a falling girder to save the band has now become him getting his funky grove on and dancing like your dad at a disco. Awesome.

Next week, Triple I unleash their genius plan to explain the Transformers and Bob provides a lot of in-jokes for people that worked at Marvel comics in the mid-1980's, a demographic so small it makes filling this issue full of Springsteen jokes seem positively inclusive of the kids reading. 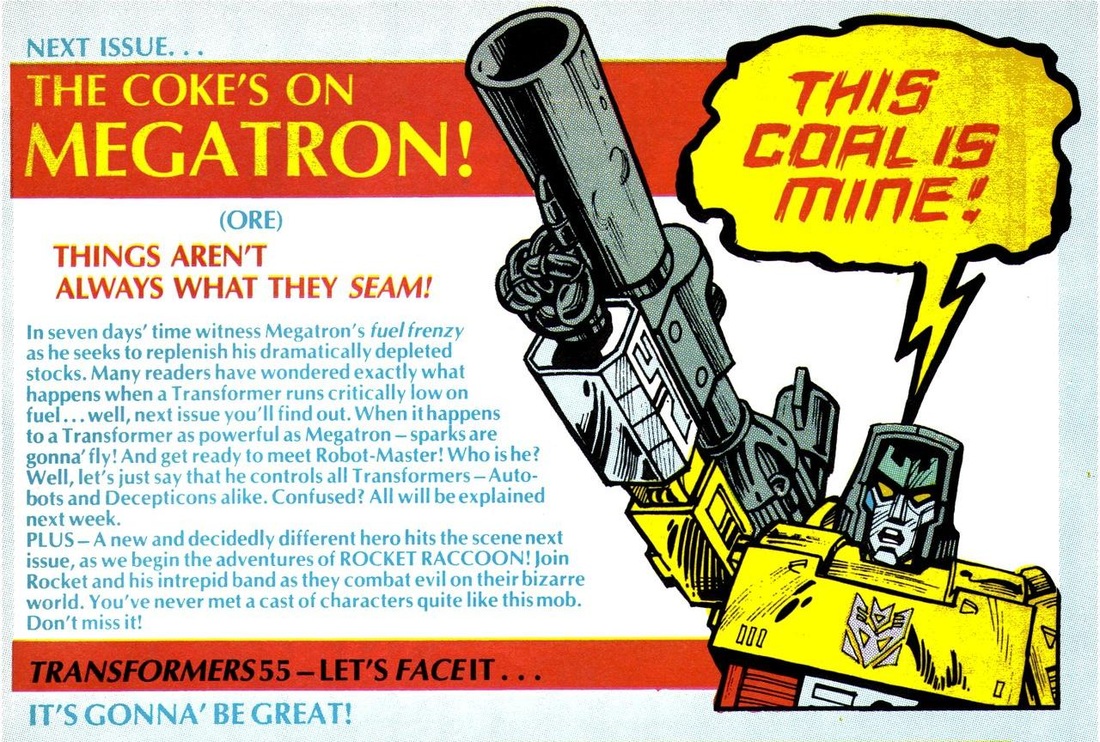