The History Book on the Shelf, is Always Repeating Itself. 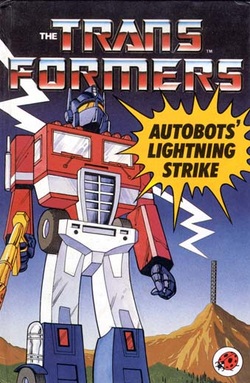 Ah, Ladybird. One of those things hard-wired into the mind of everyone in the UK (well, for those over a certain age, today's kids are probably too busy drinking cider over the park and getting ABSO's to bother with books, am I right my fellow Daily Mail readers?), those little charming hardback books with the red spine that covered everything from fairy tales to history.

Because there's this perception of them being oh so quaint and terrible British, it's very easy to forget that they did lots of tie-in lines as well. The idea of Ladybird He-Man books seems almost Universe destroying but they not only exist but they were also done for things like The Flintsones and even that great American toy franchise the rest of the world doesn't give a toss about, Action Force (the title of one, Return of the Dinosaurs is awesome enough to suggest the greatest book ever made).

Though of course, the reason for this special Transformation is, shockingly, the Transformers books. Ladybird series 853 (as in the third series of books to start in 1985) these are especially interesting as the most sustained run of British produced Transformers fiction to have absolutely zero involvement from Simon Furman. Zip, zilch, Nada (indeed, Mike Collins on art for the 1985 books is the only person to cross over from the local comic).

Instead, all the books are written by John Grant, who in turn never worked on the franchise outside of this little self contained Universe. The books aren't quite in their own bubble as much as this would suggest (the introductory text used on the 1986 books uses a garbled synopsis of Target: 2006 to try and explain Galvatron), but it does give them their own very unique feel.

Now, I've written about the Ladybird books in exacting detain before, as part of this guide HERE over at TF Archive, where you'll find synopses and ruminations on each book in turn. Rather than repeat myself (well, not too much), I'm instead going to talk in a more personal way. 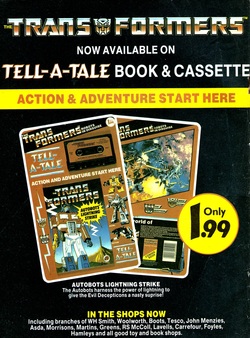 Yes, I've used this scan before...
Back in the day, we (I say we as technically they were my brother's as well) not only had all the 1985 books, but the Tell-A-Tale versions with the cassette of an incredibly butch sounding American reading the book, complete with copyright dodging version of the cartoon theme tune and “When you hear this noise... turn the page”. I can not emphasise enough how much I loved these things, constantly reading them and listening to them over and over. Indeed, as this would have been before I discovered the comic this was really my first immersion into the world of Transformers, and is probably more responsible than anything else for the waffle you have to put up with every week as a result.

The nice thing is, if taken as books aimed at young children, those four still stand up surprisingly well. The worst one, Megatron's Fight For Power, only suffers from having too much packed into such a short page count that there's several irrelevant dead ends (the Autobots needing fuel, Ironhide going on a trip...). Laserbeak's Fury especially is a fantastic fun read, but the other two books aren't very far behind it.

Yes, there tends to be a certain reliance on formula. Some of which is understandable (there's often a moment where the Autobots have to have something like lightning or windmills explained to them so the reader can get educated), some of which is baffling (Grant has a great love of ending stories by having the Decepticons buried by something). But there's always an effort to dress up the format with some bells and whistles that gives all the stories far more style than you'd expect.

They're also surprisingly grown up in places, it'd be difficult to imagine a modern book aimed at such a young market where the child lead (Spike rather than Buster, a lot of the names and set up are taken from the opening of the cartoon, though oddly all the books with him in jump through hoops so as not to refer to Spike's Father by name) carries a knife or jumps out of a moving car.

Also, the characterisations tend to be spot on, Megatron and Starscream especially play off each other wonderfully in the second book. Yes, even with the “I am old because I am hard” comment.

Of the other books, we also had the Movie adaptation. Which was nice and exciting and very well put together with some lovely screencaps. Though Grant generally sticks closely to the film as seen on-screen he adds some nice descriptive flourishes as well. As Optimus is the only character to die on page you also get a version of the story that more easily leads into both the UK future stories (with Wheeljack) and the Japanese G1 shows (with... well just about every Autobot who died). Aint that grand?

The other Ladybird books were something I was completely unaware of until I discovered fandom, and hadn't read until I started to put together that TFArchive guide. The problem with a range of novels aimed at very young readers is you quickly outgrow them, so even a year later there would have been little reason for our parents to bother buying any of the newer ones, the movie book being a special exception.

This is probably a good thing as the second and third lot of books feel somewhat lacking in comparison. This could be due to not having the rose tinted glasses on as with those I actually owned as a child, but whilst there are still some very enjoyable ones, especially in the 1988 books which feel like Grant has regained some of his mojo, none feel as well thought out and full of energy as those initial titles. Mike Collins is also sorely missed on art as well.

However the two Galvatron books are the only really poor ones, even if they do benefit from a fresh take on Galvatron that sees him as a less careful and more impulsive leader than Grant's Megatron without him being a full on loon. There are however too many slightly odd things in them- such as the Autobots wanting to stay hidden from humans whilst living in a massive hard to miss city- that make them feel as if they were written, or at least plotted, before the decision to use the 1986 future characters was made and the attempts to work round this don't successfully paper over those cracks. 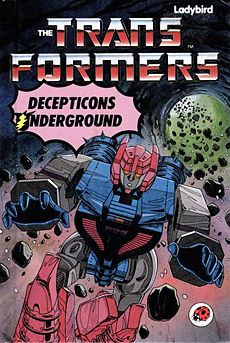 The last book.
The Nebulos set books do have a bit more enthusiasm in them, and if nothing else you get a nice wrap up for the entire Ladybird continuity as the Decepticons are finally dealt with by seemingly being buried underground forever, such a perfect pay off to Grant's fondness for this solution to his plots it even feels like it could have been planned from the start.

The Ladybird books are cheap and easy to find and provide a nice counterpart to the weekly comic. I wouldn't especially bother with the two 1986 books (if nothing else the title of the first one is an outright lie as Galvatron doesn't attack anyone from the air in it) but the '85 books are definitely worth a look, whilst out of the last four the very final book gives you more Quickswitch action than you can possibly handle.

Whilst this special write up was done specifically to celebrate the first anniversary of Transformation, Addendum is going to become an occasional special feature. With future plans including Transformers in 3-D and the single greatest novel known to man, Battle Beneath the Ice. As the project nears its end I'll probably cover the various mutually exclusive follow ups to the Marvel comic Universe as well. Yes, I am thinking that far ahead. I am nothing if not insanely optimistic.

But next week it's back to business as usual with the full on rock on second half of Rock and Roll Out!. 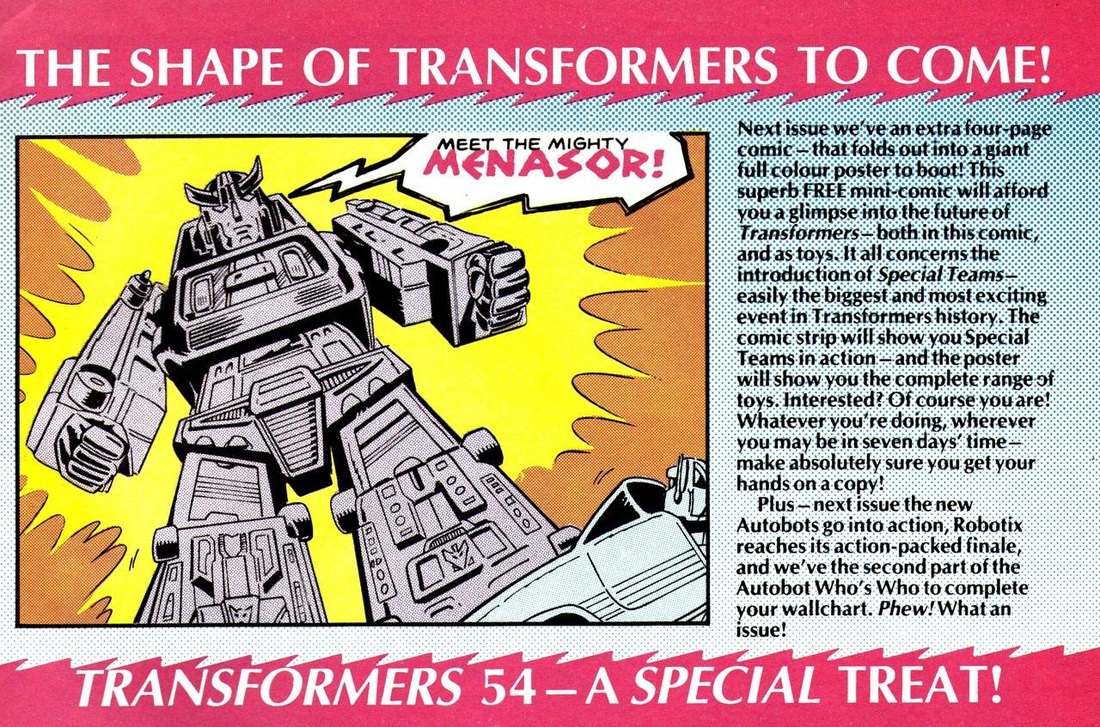