There Aint No Tits on the Radio. 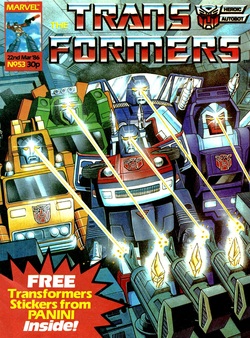 
It looked like we were shooting balloons at that thing!


After two weeks of just Megatron by himself, this new story starts by feeling as if it's trying to desperately compensate for the shortfall by not just opening with the introduction of five new characters but by shoving as many others as it possibly can in as well. Optimus even takes Jetfire on a tour of the Autobot medibay to show off the battered and injured troops on the point of death just to try and make sure everyone gets a look in.

It's fair to say that most of fandoms perception of this story is focused almost exclusively on the second half we'll be talking about next week, the wacky rock concert parody. Which is a pity because the really interesting stuff is in these 11 pages.

First up is Jetfire undergoing the "Rite of the Autobrand" and becoming a fully fledged member of the red badge team. It's really nice to get a real feel of Cybertronian culture for the first time since the very first issue, and it helps give the first sense of these creatures as aliens since Man of Iron. As well as the ritual, with it's mixing of bodily fluids in an almost proto-Klingon way, and old Cybertronian sayings we also have Optimus lay out how the Autobot leadership works: They're united in a common cause and he leads only as long as the majority wants him to lead. A much fairer and more democratic system than "A magic glowing ball made out of part of God picks who gets to be in charge".

This is then followed up by one of the most fascinating concepts Budiansky would ever introduce: The memory bank. Five volunteers had let Optimus copy their minds and put them in storage on the Ark in case additional troops had been needed (a forward thinking leader). With new bodies having been built for Skids, Hoist, Grapple Tracks and Smokescreen it's now time for these duplications to be brought back online. 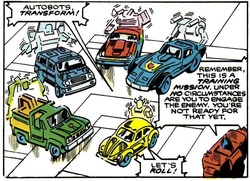 Poor old Grapple doesn't even get a day out.
This is actually a proper Science Fiction with a capital S and F concept. Something that Transformers rarely toys with to that extent. There's an old argument that a TV show like our old friend Columbo is more "Real" science fiction than many things that officially class themselves as such because many episodes are concerned with exploring the implications new technology can have on our lives, in that case in terms of how it relates to crime. So you have William Shatner using the then cutting edge home video machine to give himself an alibi. Most actual mainstream science fiction merely using the trappings of the genre as window dressing to jazz up more traditional stories, be it Wagon Train to the Stars or, as in the case of Transformers, war with robots that are portrayed as people who look funny 98% of the time.

This isn't in itself a problem, and people who bang on about "Real" science fiction can't help but come off as snobbish at times. But this idea here, of the ability to create duplicates of the minds of your troops is rife with SF storytelling possibilities of how this affects the characters. The most obvious being what would happen if new Hoist ran into old Hoist. So it can't help but feel a bit of a shame this top notch idea is never, ever going to be followed up on or referenced again after page six, that Uncle Bob came up with this just as a way of bringing in the new toys without having to resort to a Matrix related plot again. But that's the nature of the beast, and at least the comic is touching on these big ideas however lightly.

The other shame of this introduction is how little four of these five new characters are going to contribute. 1986 is going to be a very, very busy year for toys and many of them are going to get lost in the shuffle and barely get to do more that grab the odd line here and there. Skids is going to do well (it's possible there was a reciprocal relationship between cartoon and comic where the one would try to give time to a toy the other was forced to ignore) with a couple of American issues and getting to be noticeably absent from the UK comic in a way few other will manage. Everyone else is going to be fighting for scraps, though some will be helped by the UK stories.

Indeed, there are two of the 1985 Autobot cars who stand out more for not being here: Inferno and Red Alert. It's hard to be sure why, it would hardly be overdoing things to have two extra bots just standing there in the revival scene and it's not as if Bob will be averse to having more characters in a story than he needs when it comes to having to introduce new toys. Their alt modes wouldn't fit in easily with the story to follow, but the same is true of Grapple and the script just contrives a reason for him to stay behind (in Optimus wanting his for a SECRET PROJECT of which we'll be hearing more later in the year). It's all very odd, but at least means that Red Alert's appearance way back in The Enemy Within doesn't get contradicted. 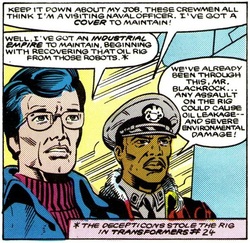 This deal gets worse all the time.
The brand spanking new cast are put straight into a tour of the local environs with Bumblebee, which is the segway into the rock star plot that will fill the second half of the story and does more of the culture class comedy that's more typical of Bob's writing than serious exploration of SF ideas. Cue hijinks at a gas station where the Autobots (thanks to their agreement with Blackrock) hilariously misunderstands things and Skids gets told about the Brick Springstern concert that's going to be rocking Oregon that night. But more on that next week...

The big thing in terms of lasting consequences is the first appearance of the blow up dolls the Autobots use as dummy drivers. We're now so used to realistic holograms being used for this sort of thing it can't help but seem charmingly quaint, the poor buggers can't even move their lips when they're pretending to talk to humans.

Over in the B plot, Shockwave escapes from his swampy prison (this week's comedy human reaction: "It sure isn't any seagull Janet!") with an Energon syphon that will let him convert any form of energy into energon cubes. And he wants to test it at an area where an awful lot of sound is going to be produced. Could it be connected to the rock concert? Could be.

There's a slight discontinuity from the UK Soundwave led Decepticons as Starscream seems to be (albeit pathetically) in charge, but this is made up for by his fun bitchy interaction with their returned leader as Skywarp and Thundercracker cower. It's also worth noting that at no point here does Shockwave claim to have invented the brought in from the cartoon energon cubes. I suspect that was the intent, but with the tendency of the comic for characters to exposition at each other about things they already know this doesn't hugely contradict their usage on Cybertron later.

Watching (and thanks to bugs, listening) the Decepticons as they plot on the captured Blackrock oil rig is the U.S. Navy. Aboard the lead ship, Blackrock himself (this week's facial hair update: Clean shaven) and the brand new recurring character of secret agent Walter Barnett, who'll be involved in some of the sillier ideas over the next few years and looks suspiciously like Billy Dee Williams. All he can do for now though is watch as Shockwave and the jets fly off to carry out their sinister aural plot.

This week's cliffhanger, of Bumblebee getting a call on his space radio from the Ark, is rather weak and indicative of the rather drastic shift in quality we're going to get in the second half of the story. But on its own merits, these 11 pages have some lovely ideas and the comedy stuff, whilst standard Uncle Bob, is at least well done. The only real downside is that, faced with having to draw more Transformers, Don Perlin's art is somewhat worse than in the last story.

One nice touch in the rest of the comic is that they've now decided to start regularly crediting the cover artist, and indeed the Transformation page goes to the effort of naming the artist of every one since issue 40 (which of course means that, by accident or design, one one of the American reuse covers gets a nod). With the cover being the first point of sale for any floating buyers they're an important part of the title's success and we've had some very good ones in that period. Indeed, Robin Smith's effort this week is rather good as well, creating the right feeling of mystery about the Mind Bank.

Soundwaves has, what I believe to be, the first letter from a grown up that's not written on behalf of a small child as 17 year old Nicholas Taylor from St Annes-On-Sea sends in a hugely enthusiastic letter complete with art off himself as a robot. Soundwave is somewhat in awe and it's easy to see why. It's nice to have confirmation that the comic reads well to people outside the target age range without the rose tinted assistance of childhood nostalgia.

Robotix get to reveal their secret origin, which in a mildly surprising way turns out to be the same as that of the Gobots, formally organic humanoids turned into robots by a terrible accident. Slightly cheeky of Hasbro there.

Robo-Capers meanwhile has another sticker album joke whilst Matt and the Cat forces two Humph's on us.

There were also some a free pack of stickers to go in the album from last week. In a bit of cross promotion a second pack would be given away with issue 38 of Secret Wars II. After this the kids have to buy their own, Marvel UK effectively having co-opted Dr. Kananga's method of getting America hooked on cocaine by giving out free samples first in Live and Let Die.

Next week we get the rock concert of a life time, but even the next issue page can't get that excited by it, instead bigging up the free mini-comic that's all set up for the next run of UK stories we'll be getting. But first...

This Sunday is the one year anniversary of the Transformation part of the blog. How the time flies. Over the last 12 months I've had the Olympic torch go past my window, nearly been sacked, fallen in love with modern Transformers comics again thanks to James Roberts and fallen out with several mad Regeneration One fans. And over these 55 entries we've seen the comic grow, change and stumble in a few places as it's found its feet. Much like my writing style. So, to celebrate on Sunday, baring death or accident, we'll be getting a special entry as part of a new occasional series of addendum pieces looking at things that are tangentially related to how we enjoyed Transformers in this country.

As for the first one... You'll never guess. 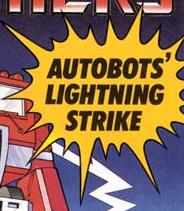