THREW IT ON THE GROUND 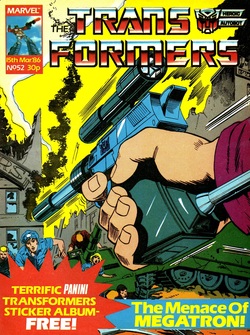 
But Megatron gives no thanks-- he only takes, and now I take your life, fleshling!


First up this week, a confession of a brain fart. Last week I claimed this was the only Marvel UK story with no Autobots in it, something which more than one of my regular readers cheerfully pointed out is completely untrue. That's what I get for mocking the wiki and goes to show you just can't trust anything I say. I should have tried bluffing and pretended I meant only American story...

In more positive news, since the last entry the most exciting bit of Transformers related happenings was the totally random guest appearance of a G1 Galvatron toy in Saturday's Doctor Who, where the lucky sod got to have Clara fiddle with him. I'd certainly rip apart her space time continuum if you know what I mean and I'm sure you do. The best poor old Megatron can manage is having Joey Slick finger his trigger. Which is just one of the many reasons Galvatron is much more awesome.

Ahhh, Jenna Louise Coleman. Now, what the hell am I actually supposed to be talking about? Oh..

One positive thing the splitting up of this story into two halves is it really shows up how solid Budiansky was at story structure. That might sound like it should be basic writer 101 territory but too often the rule of cool comes into effect and author's will just have stuff happen without thinking it through properly. Which is the sort of thing that's easier to get away with in a big budget action film (I'm expecting to enjoy Star Trek: No, Honestly He's Not Going To Turn Out To Be Khan In A Surprise Plot Twist on Saturday but not to come out of the cinema going "What a great plot!") where there's enough going on to keep you distracted, but books and comics really should work harder to make things flow. Yes, I'm looking at you Robots in Disguise with your random "Lets give Devastator a head transplant from Prowl" way of resolving your long running political plot-line.

In this case, the strength of the structure is in how Uncle Bob very deliberately has the second half of the story mirror the first. Whilst last week we saw Slick go through his life as a looser we now see the flip side of it as a successful gun toting gangster. He goes through the same motions of visiting the same friends and places but is now faced with very different reactions. It's only a small thing, but as well as being well plotted it means that the original American issue once again works as a two parter in the UK almost as if it was planned despite the weak cliffhanger last week.

Even with multi-billionaire's like Blackrock and nutty freaks like Jossie previous issues that have had a lot of human action have always found time for collage kids or blue collar workers. Even Bomber Bill is more likely to be someone kids can recognise as someone they know than any of the hoods in this story. There is some half arsed attempt to try and make Slick seemed sympathetic and doubting about his chosen life, but all of that fails as he only lets the cops arrest him at the end because Megatron has buggered off, if that hadn't happened there's no real feeling that he wouldn't have carried on living the high life once he'd dealt with Lomax. 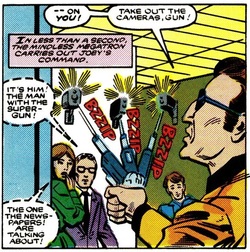 Repeat... a lot.
Even the crimes themselves, which otherwise might be the highlight of the story, aren't especially imaginative or well executed. Basically Slick just goes around pointing Megatron at things (security cameras, the national guard, a building), shouts "Gun fire!" and then there's a poorly drawn explosion. Despite the escalating scale of the things he's pointing at this gets real old real quick.

Up against the exciting crime spree we have to once again rely on Megatron's very brief robot mode appearances to carry the show. Whilst the conceit of him being dropped on the ground fixing all his problems is perhaps a bit silly (at least it was a fall off something as high as a mountain that messed him up in the first place), it is more than countered by his joyous camp rant at all the nasty things he's going to do to Slick. Shame he doesn't follow through on any of that, but instead decides Joey deserves his respect (!) and walks off to reclaim Decepticon leadership. That's walks. You'd have thought once the army had (presumably) been called in after the issue ends they'd have had no trouble both following his giant robot footprints and catching up with him before he got too far.

So thus ends, what is for me, the first real big failure of Uncle Bob's run. Thankfully not a killer blow as things do get better (and even this story has at least one fan as the comments from last week show) but the fact Slick never appears again is something to be thankful for.

The big exciting thing this week though, is the free sticker album from Panini. Sadly my collection doesn't include a copy of this (making it, the odd poster aside, the first major bit of paraphernalia I don't have access to), meaning all I can do is imagine what it's like. For the benefit of Americans, in the UK sticker albums in general and Panini ones in particular were (and maybe even still are) one of those things all kids collected at one time or another.

Personally I never got very far in my one attempt with the Action Force album I got free with a later issue due to a lack of patience with having to buy all those little packs of stickers in the hope of getting the ones I needed. I am nothing if not lazy. However, these albums are so ingrained in our DNA that not only do they still invoke misty eyed nostalgia in us, but that it becomes hardly surprising that a lot of people who went on to become fully signed up fans seem to have brought this as their first issue precisely because of the free book. It just makes you wonder how many more of those extra buyers never came back after reading the piss poor lead strip.

Headmasters inspiration?
Robotix continues in setting up its short lived world, as it's been a good five or six years since I saw the film my memories on the exact details were hazy enough to be surprised by most of it. Considering this is also a Hasbro property I do wonder if the idea of humans "Interfacing" with the giant robots to make them faster, stronger, better was later a direct inspiration on the Headmaster creation process? Certainly there's more than a good chance the same Hasbro creative team was involved. Though you'd have thought after the idea had failed badly once they'd have known better.

For those deeply worried, Robo-Capers is unaffected by misprints this week and even makes a sticker album joke. Sadly Matt and the Cat is also perfectly readable. Such is life.

Next week we actually get a story with Transformers walking about and talking and doing stuff rather than The Adventures of Minor Crooks. We even get five brand new characters, some of whom will even go on to be major players. Well, one of them. Mostly in the UK stories. Albeit he'll be more notable by his absence than anything else.

The big thing though, from the point of view of my ego, is next week is Transformation's first birthday! Rock and roll. 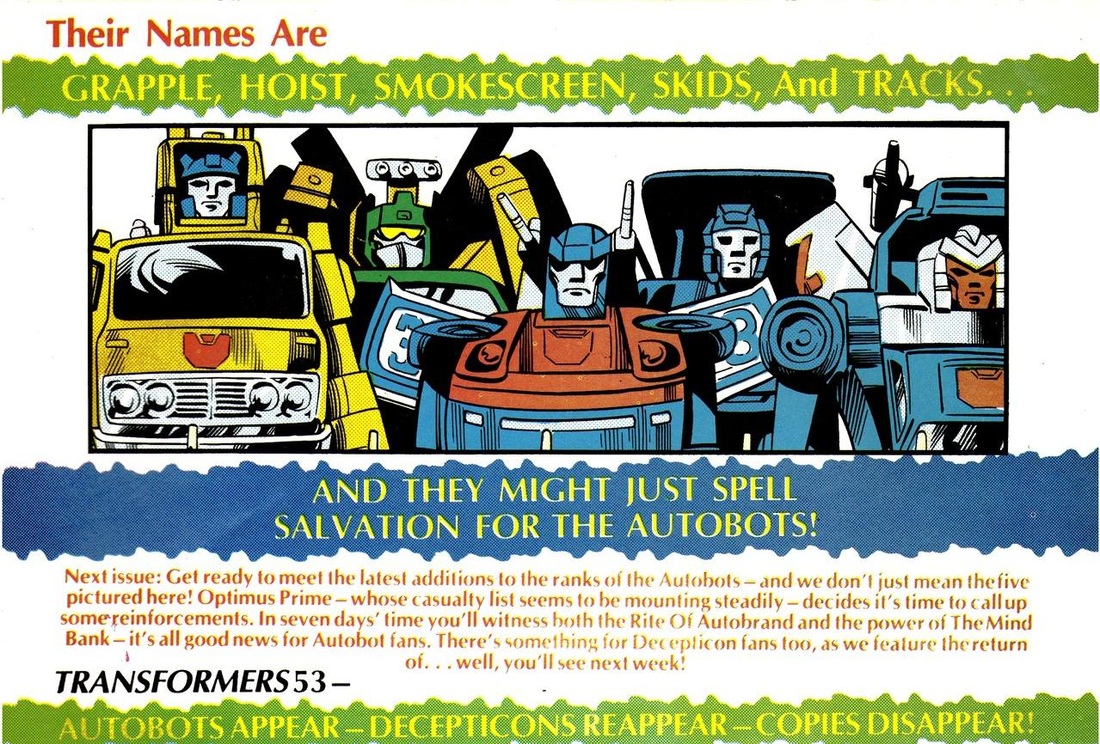