You Had To Be A Big Shot, Didn't Cha? 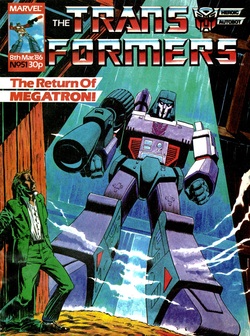 
You are not dead. I am not a weird angel. I am a Transformer.


Every long running franchise has what can be termed its Spock's Brain moments. Episodes/issues/films where common sense has left the building and everyone involved seems to be on copious amounts of drugs. These often have have a reputation for being infamously bad, usually slightly unfairly. Spock's Brain is nuts but not even close to being the worst Star Trek episode (step forward the insanely racist Omega Glory), nor are Time and the Rani, Gray 17 is Missing and Carnage in C-Minor the true nadir of their respective shows. They're just full of such insanely misconceived moments that they linger in the memory much longer than the merely blandly bad.

Shooting Star! is, in theory, the first of many such OTT bonkers stories from Bob Budiansky. The first step on a road that leads to hypnotic car washes, cowboy Skids and film star Skullgrin. Stories that, flaws and all, have a sort of goofy charm if read by consenting adults. Certainly there's all the pieces in place for something delightfully daft. Small time hood in Joey Slick finds Megatron after his fall in the snow and uses the mentally damaged submissive Decepticon leader to go on a crime spree in order to increase his social standing and get back at the Mafia don he's in hock too. Sounds like it's full of potential for ceeeeeeeeeeerazy fun, right? The credits even refer to it as "offbeat", as if Uncle Bob was deliberately courting the kitsch lovers. 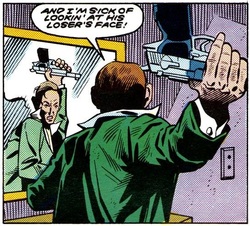 Loser.
In execution though, it falls flat. Mainly because the inherently camp situation- within three pages Megatron shoots two hoods at point blank range who suffer bad headaches at worse- is played worryingly earnest. It's written as if Joey is a character we're supposed to take seriously as we see his lack of self worth despite being loved by everyone in his neighbourhood, as if we're supposed to be horrified when he descends to the point he uses Megatron to rob a convenience store before blowing up a pursuing police car (the exciting cliffhanger being the reveal the cops in the car are OK). All from a character in a bright green suit that makes it look like he's cosplaying as the Riddler.

This gives the issue an uneven tone that, say, Buster Witwicky and the Carwash of Doom! won't suffer from. It might get away with it if Joey was someone we remotely cared about, but he's so clearly just a one off whiney git you can't get involved in his plight.

Even the return of Megatron can't generate the excitement it should. This is after all the first and only story in the entire run with only one Transformer in it, the only one with no Autobots, to all intents and purposes a Megatron Spotlight. But, at least in this first half, this unprecedented chance for the book to focus on just the one character is wasted. As fun as it is to see Megatron being a slave most of his brief dialogue in his one robot mode scene is a story so far recap. Otherwise there wouldn't be that much difference to the story if Joey had just found an advanced assault rifle.

There's such a big drop off from the quality in the last Uncle Bob story (which, lest we forget, was published just the month before this in the original American run) you could almost get the bends. There's a real sense that having paid off his big year long storyline he feels somewhat spent and would rather have left the book at this point and gone off to do something more human focused. This may well be the first time being the only person at Marvel with the gift to come up with all those names and characters will be a curse on the rest of his career.

Highlight of the issue.
Luckily, this reticence will be short lived, at least for now. We won't return to the really good stuff until after the next batch of UK stories but, once we survive next week, things will start to be on the up and up as Bob recovers his groove (and eventually, his Groove).

There is one significant début this week, Don Perlin on art. He'll go on to be one of the mainstays of the U.S. stories and will develop an appropriately cartoony style for some of Bob's more eccentric moments (teddies in space), but here hasn't quite got the hang of the titular robots, so it's probably lucky he's required to draw so few of them. Humans he's more comfortable with, and in the great spirit of Jesse leering he has a bit too much fun drawing the bikini clad babe hanging out with gangster Lomax.

The thing that really jumps out at you when you open the comic is that Robo Capers has been badly misprinted with results that are both hilarious and deeply surreal in a way this little gag strip rarely is. Perhaps Matt and the Cat would be improved no end by having the colours mucked up and the dialogue removed?

The second half of the first century starts with a brand new back up, Robotix. This relatively obscure franchise is one that will be well known by any UKers who ever rented a Tempo video, including of course their Transformers tapes. The standard trailer at the beginning of these dusty old VHS' was the opening credits of several of the available cartoon run into one another. I suspect many of you reading can now, unbidden, sing the theme tunes to several shows you've never seen ("Bigfoot and the muscle machines, they're big bad dirty and mean!").

For years, Robotix ("Hold the future in your hands!") was only known to me from that trailer. It was something of a disappointment when I finally saw the "Movie"- the few episodes made edited together- on DVD, and found it really wasn't very good, mainly notable for the giant robots being played by Transformers voice actors doing their Transformers voices.

Best Robo Capers.
But that shows where the real interest lies in this comic, it's about two warring giant robot armies. Considering that Gobots was more a case of parallel evolution this is the first real big attempt to replicate the success of the robots in disguise, from Hasbro no less. As this has to do the job of the very first issue it actually shows what a decent job the comic did in very difficult circumstances as the various character introductions here are much more forced. That's mainly thanks to the decision to have a fight going on at the same time each robot delivers their info dump. Though to be fair, Robotix only had one U.S. issue in which to do everything rather than four, so maybe it'll pick up.

The scary thing is, as pointed out by reader Alex in the comments section last week, Robotix actually has its own TFWiki page because of a throwaway joke in one of the AllSpark Almanacs. Which goes to show that, that as wonderful as it frequently is, the Wiki can really try too hard with the wacky sometimes. But then, when there's an official book like the Almanac that only really exists to provide fodder for the wiki we're probably heading for a situation where fandom and the franchise will eat each other anyway.

Soundwaves actually features some foreshadowing for a future UK story as he reveals he'll be taking next week off to go train the Constructicons, the results of which we'll see in Devastation Derby! There can't be many comics that play with the fourth wall like that.

Despite the continuation of the weak lead story, next week sees one of the best remembered and loved instalments of the entire run, one that seems to have been the first issue for many people, and all because of two simple little words (two words the Next Issue page is more excited by than anything else): Sticker Album. 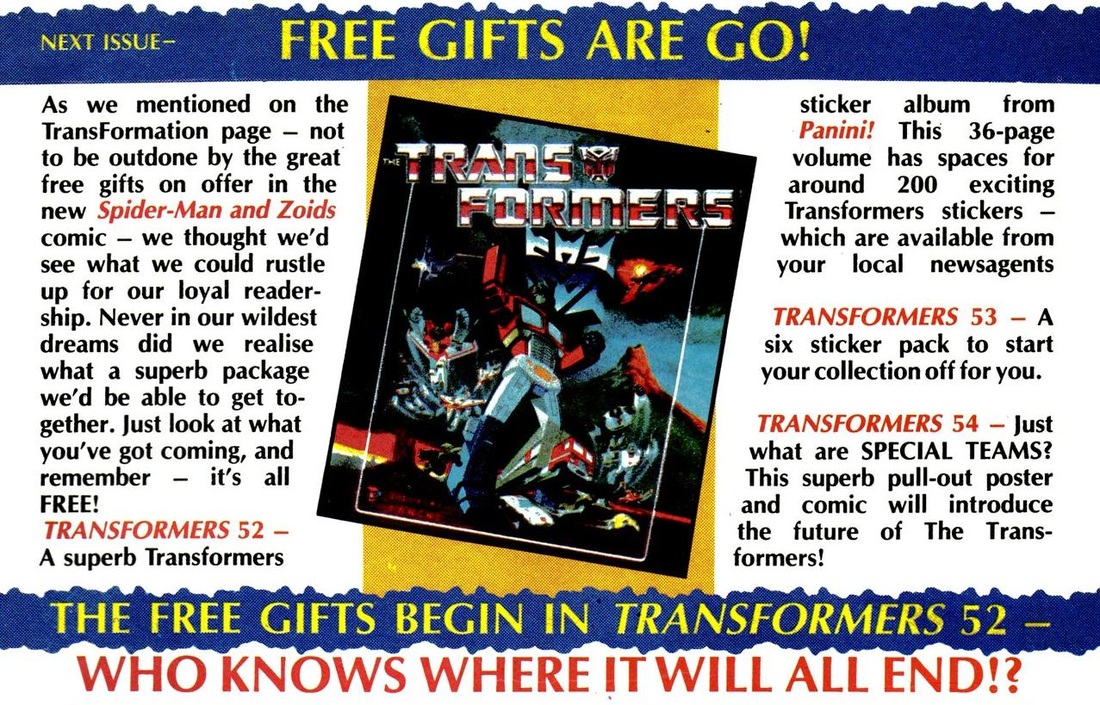