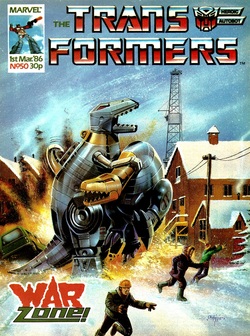 
Here we are then, the half century. It feels like only yesterday I started this meandering venture but I've already covered all the issues contained within the first, very big and chunky folder of my Marvel UK comics. One down, five and a bit to go. So, as has now become my Thursday evening, tradition, I'm laying on my bed with an episode of Columbo (this week the one with an evil dentist and a truly bizarre “As himself” cameo from one of the Darrin's offa Bewitched) on in the background whilst writing down my increasingly long winded thoughts on the latest issue. Only this time in honour of the occasion, I'm wearing a brightly coloured hat at a jaunty angle. Rock and roll.

Compared to the following Big Number issues the celebrations seem somewhat smaller in scale. There's no wraparound cover (though the painted one we do get is lovely), no extended content and the scale of events within the story is relatively smaller. What we do get though is one of the very best UK issues.

A sign of this being a bit special is how the "Story so far" recap that opens the story is handled, via a desperate last log entry from Sideswipe. That might not seem amazing in and of itself, but just try and remember any other point in the Marvel run where everyone's second favourite Autobot Lamborghini got to speak in paragraphs? This is an unprecedented moment that continues the trend of this story to give the characters who've tended to fall through the cracks their moment to shine.

This week's looser character.
As has so often been the case in the past, the basic plot is surprisingly straightforward. The Decepticons have dumped Sludge at Grimlock's location in Canada and used a sonic lance (a term Furman has almost certainly borrowed from the then recent Doctor Who story Attack of the Cybermen) to send them both even more loco than they were already, resulting in a massive fight across a small town. Optimus and a group of Autobots arrive and take care of them with a two pronged attack, first electrocuting them by crashing a shuttle into the frozen lake they're currently battling in and secondly by Bumblebee blowing up the captured A-Team shuttle with the lance in it.

As has also so often been the case in the past though, God is in the details, and it's in those areas around that plot in which this excels. Firstly, continuing what has arguably been the theme of this arc, we once again see the very human cost of the Transformers war on Earth. There's no dead bodies this time, but amidst the ruins of Doonstown we see battered, bruised and terrified people. The cover promises a Godzilla style romp but right from the first page we're hit with the horrors of giant monsters fighting through human homes. Which not only makes the two comedy cowboys surviving their tussle with Slag unscathed last week all the odder but puts front and centre why it's so important the Autobots succeed here. The Universe itself may not be in peril but even within this small scale there are humans to save from a horrible death.

The big appeal though is once again Soundwave and his two buddies. After his bizarre pirate moment last week suggested the weight of leadership was sending him a bit peculiar here he's back to his best, sardonic, cool and fiendishly smart. And famously he wins. He sets himself some limited achievable goals but actually exceeds them. As well as the intended damage caused to the Autobot ranks the Decepticons luck into Grimlock having turned up near an oil refinery, meaning they also get the added bonus of energy to run off with that covers their expenditure on this mission.

The Autobots on the other hand, may have collected the Dinobots but the price has been high. Many of the characters battered here ( such as Bluestreak and Sideswipe) won't be seen again for a long time, outside of the fiction because of the forthcoming influx of new toys but it works to add weight to Ratchet's final summing up of their losses.

Throw in the destruction of two shuttles and the fact there hasn't been a pat solution to the Dinobot's breakdown makes this a very bleak milestone, and as such this time Soundwave's- more restrained-final gloat feels much more justified.

On top of all that, we even get our first ever Furmanism (that is, for the uninitiated one of the stock phases he likes to use as a sort of signature) as Prowl declares "Time I wasn't here!" as he jumps from the crashing shuttle. It's only a minor one, that will be most famously used by Nightbeat in similar circumstances during Matrix Quest,and it will be a while before they become standard (and even longer before they start getting forced in as a crowd pleasing measure) but it's still a notable moment.

If there is a weakness here it's the one brief attempt to make the stakes seem bigger than they really are. When Optimus decides to go stop Sludge and Grimlock he proclaims he'll do so “OR I WILL DIE IN THE ATTEMPT!”. Which is insanely melodramatic under the circumstances. As much as Prime dying will become a cliché this pushes that seeming death wish into wacky sitcom territory. 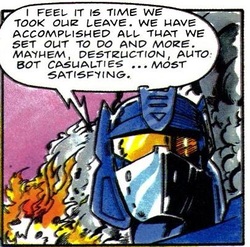 This week's winner.
But that slight niggle aside, this is an extremely strong, even subversive conclusion to this story. The really well done aspect though, is that even with the good guys loosing at the end this still feels like a celebration of the very best of the comic to date. Indeed, with us being three issues away from the second year toys turning up this effectively marks, if not the end of an era (as Furman's next non-Hasbro dictated story will continue the Dinobot focus) then at least the beginning of a transitory period that will take us into the film.

The Transformation page shows how much of a swagger there is in the production team by bigging up the next 50 issues- in other words sales for both the comic and the toy-line were good enough to guarantee another year's worth of content. Unfortunately it tries to make the Special Teams sound really, really awesome which is hard to take seriously in retrospect. But then, to kids lucky enough to be living in a time before that slightly soul sucking story was published just the name was likely enough to create a sense of excitement of what was to come.

Long term planning.
Speaking of things that would only seem odd in retrospect... Well, it's no secret the next story isn't regarded as an especially good one (though it is Nel Yomtov's favourite fact fans). So both the opening and closing pages of the issue making such a big deal of it is always going to seem odd to anyone reading it now. So it is worth trying to put any foreknowledge aside and try to remember that Megatron is still officially the lead villain of the comic and hasn't been in it for around five months/20 issues (and that's counting Decepticon Dam-Busters!), his return is genuinely a big thing and something the comic should be making a big song and dance of.

As another sign of the transitional period we're about to enter, the Iron Man back up ends this issue as well. It concludes in a really odd way as well, not in that Iron Man is doesn't win (in fact he comfortably gets the better of Doctor Octopus) but in that it ends with Stark taking his girlfriend back to the restaurant the Doctor kidnapped her from- because a reminder of horrible trauma is what all the girls love- and the two of them plus the waiter making a big joke about ordering octopus. You almost expect some “Wah wah wah” music to be playing in the background on the final panel. I'm not sure who decided this mostly serious two parter should end like a really bad Star Trek episode but it totally destroys all the goodwill built up by the rest of the story. Lets hope Robotix restores some dignity to proceedings.

Before we finish up issue 50, I would like to take this moment to thank all of you who come read this every week (if this is your first one.. fuck off. Where have you been for the last year?), traffic to the site seems to have roughly doubled which suggests I'm not just shouting into a void and the half dozen regulars who comment on the write ups a lot and offer advice and corrections and even fan art are all much loved.

Even when I'm slightly scared of you.

I just don't know what I'll do when I run out of Columbo episodes to have on in the background when I'm working on each entry, I'm already into the 90's run so there can't be many left. I may have to give up the blog when I get to the end of that show. Or just carry on with the William Shatner episodes on a loop. I just don't know yet. The only way to find out is to keep reading. 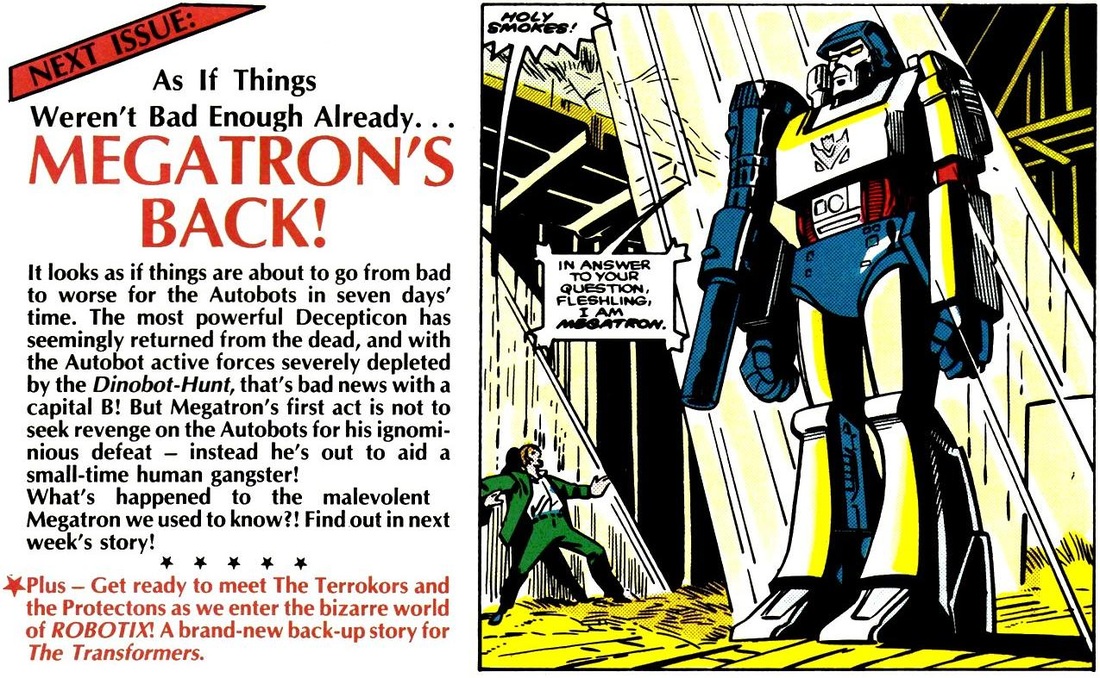 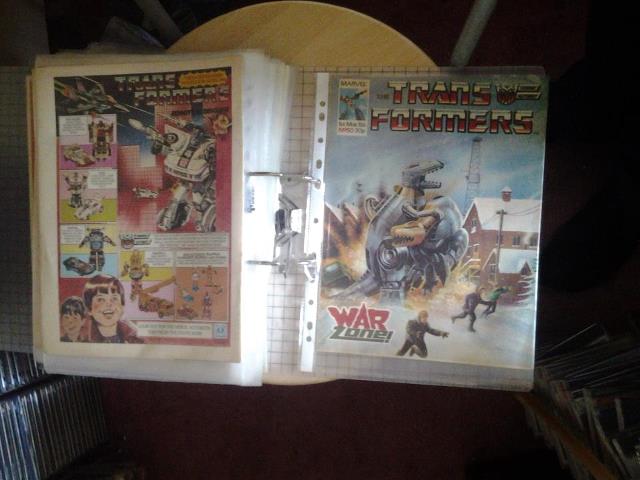 End of phase one.