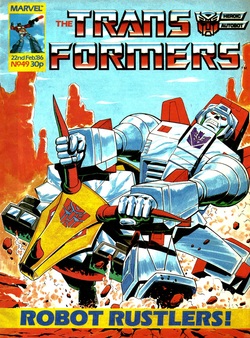 
For any fans of '80's television there's something very familiar about this week's issue. So lets talk for a second about one of the less acknowledged influences on the series (despite all being part of the same nostalgia package for people of a certain age): The American family action show.

For those of us in the UK the holy trinity of such shows are of course The A-Team, Knightrider and, very much in third place, Airwolf. Americans would probably add MacGyver, but that only made a minimal impact over here. Then the further down the list you go you've got things like Knightrider With A Bike and The Incredible Hulk If He Turned Into Animals Rather Than A Man Painted Green.

Whatever their gimmick, all these shows were, to a greater or lesser extent, based around the same Littlest Hobo format of a loner (or group of loners) outside normal society going around helping those regular channels can't assist. Considering they were hugely successful with the exact target audience of young boys Transformers was aimed at it's hardly surprising there's some bleed over in style despite the seeming big difference in set up. This will usually be most noticeable in the Uncle Bob stories where humans with their own problems get caught up in the giant robots affairs, but one particular trope of all those series shows up in the third part of Dinobot Hunt: The urban cowboy.

The American love affair with the Western is of course well documented. But for British kids in the 1980's it was pretty much a dead genre, even if our parents might get misty eyed over Bonanza. So the episodes of the above shows where cattle ranchers are being run out of business by an evil Texan in a J.R. style hat were often the least exciting. The most noticeable example probably being the two hour episode of The A-Team which introduced Decker, which despite bringing in a major new villain is only marginally more entertaining than drying paint unless you have a deep rooted love for endless horse ridding and Lone Ranger homages.

Point of interest one.
This therefore is the root of the problem with this issue, as part of his culture vulture tendencies Furman (who would be just about part of the last generation of Brits for whom the Western was something they grew up with) has seen these shows with the same audience doing this sort of plot and decided to do his own variation without realising most of that audience don't care for it. At least when he goes down this road again with Kings of the Wild Frontier it will be originally intended for the American kids more inclined to this sort of thing.

So the basic plot this week isn't that interesting, two cowboy brothers so poorly developed only one of them seems to have a name are chasing down Slag for destroying their ranch. Cue endless macho posturing as neither seems to care there's a giant robot triceratops running about. A team of Autobots comprising Ironhide, Jazz and Jetfire turn up and save these idiots before taking Slag out, due to Jetfire shoving the watching Laserbeak down his throat.

Even the location isn't visually exciting, just being a rerun of the desert from the first part. Will Simpson isn't really suited to this style either, as the cover shows it really cries out for the cowboys and cowbots to have Geoff Senior's square jaw.

The interesting stuff is going on around the main plot. Firstly we get some follow up on Jetfire having joined the Autobots, acting as a bridge to his next U.S. showing. Somewhat oddly he's presented as a full on ex-Decepticon turncoat, even when defending him Jazz doesn't point out to Ironhide he wasn't a sentient being when Shockwave was using him.

Despite this scene being hugely influential on how pretty much every Decepticon who aligns himself with the Autobots will be portrayed-through Carnivac and Catilla up to Drift and via other versions of Jetfire- it's a very poor fit for Marvel Jetfire. What's really happening here is Furman venting after months of having to deal with endless "Why is Jetfire a Decepticon when his toy is an Autobot?" questions.

As Ironhide rants and rages at his new team mate for wearing a Decepticon badge (which is contrived in and of itself, even with no time for a formal Auto-Branding they could have painted over it) he's little more than an author avatar. It's a sign of how cheesed off Furman must have been that he couldn't wait a month for the Budiansky stories to deal with this. 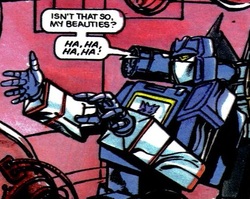 Point of interest two.
The other interesting thing this week is the ever reliable Soundwave. It's probably worth noting at this stage Soundwave will be the comic's most present character. They'll only be sporadic periods where he'll do more than be a background extra but of all the bots introduced in that first issue he's the only one who will be there from beginning to end, without dying (at one point it'll look like Starscream Underbases him, but no, unlike pussies such as Omega Supreme he'll just shrug it off), being knocked off-line or simply vanishing for years at a time. All long after his toy has vanished from the shelves. If there's one solid constant to this comic, it's our favourite communications officer.

This week he mainly provides the framing device of playing back the damaged Laserbeak's recording of what happened (the story being presented as a flashback being the latest attempt to keep the hunt a Dinobot plot fresh). For most of the issue there's a wonderful deadpan quality to him and a real sense of danger to his plotting despite having failed to capture Slag.

But then we get the single strangest Soundwave moment in all of his aforementioned lengthy Marvel career. When living it large over the captured Autobot A-Team from last issue he suddenly... Well he suddenly starts talking like a pirate. For no readily apparent reason. Unless he really thinks Windcharger is good looking enough to be called a "Beauty".

It's something of a relief when we get the cliffhanger of Sideswipe calling into Prime because his team is in trouble. Normal service will be resumed next week. 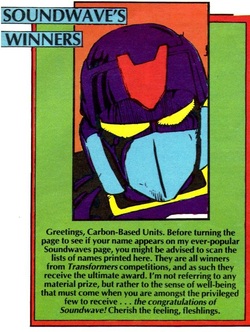 You're a winner!
Elsewhere, Iron Man has a fun food fight with Dr. Octopus that sees his girlfriend get kidnapped. A letter from Brian Lewis in Swindon points out the reprint nature of the back up, but Soundwave has one of his human helpers clarify the extremely limited distribution of the original American series in the U.K. They also helpfully explain where this occurs in relation to Secret Wars and Tony's replacement in the suit by Jim Rhodes. Meanwhile, Soundwave himself has some fun giving out competition answers.

Does anyone care about Humph dressing up as different Marvel heroes for no reason? No, I didn't think so.

What this issue effectively proves is the downside of the anthology epic storytelling style; not every one can be a winner. Luckily the big special event next week will see things more than pick up for the big climax as Grimlock returns and Soundwave wins. 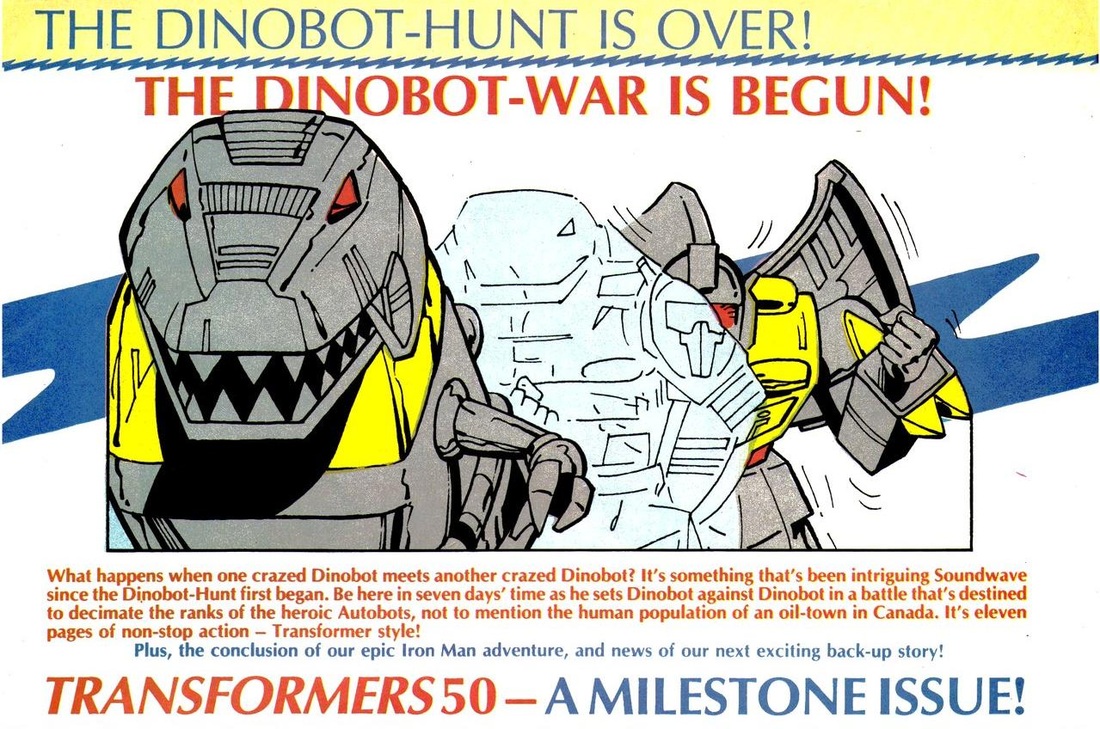