Tale Old As Time, Story Old As Rhyme, Beauty and the Beast. 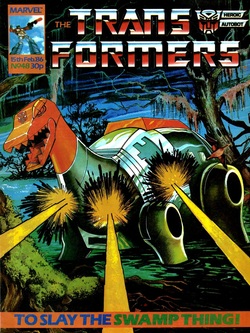 
Brought to you by my all purpose glass-gun. No self respecting Autobot should be without one!


Last week I talked about how Furman will be fairly consistent in trying to keep each instalment of one of his "Anthology Epics" fresh rather than falling into the obvious trap of just repeating the same story four times with different characters. This week the Transformation page actually takes great delight in pointing how the second part of the story isn't just going to be a rehash.

"So there you go, the rest of the teams will have no trouble at all rounding up their particular Dinobot. Well not quite. As we begin part 2 of Dinobot-Hunt you'll see a new element enter the proceedings... a decidedly deadly element..."

This could run the risk of appearing smug, the comic is not only trying to avoid the obvious but feels the need to tell everyone how smart it's being. For this to work the following eleven pages need to live up to that promise. Despite the basic similarity in set up (and the issue opens with a near identical flashback to that which opened Part 1- albeit with Prowl lecturing rather than Prime- as if to lull us into a false sense of security) this is a very different type of story.

Lets deal with the cover star first. It turns out Sludge is fairly relaxed when off his rocker and is cheerfully living like a real dim witted brontosaurus in the Californian bayou. And he's also fallen madly in love with TV reporter Joy Meadows, who thinks she's lucked into the story of her life.

This is the least interesting part of the issue, mainly because it's so clichéd. But there's still a couple of nice subversions. Firstly, the reveal that Sludge doesn't actually need to eat the foliage he's consuming and that his internal mechanisms are vaporising it as fast as he's chomping it down almost feels like a wry commentary on the ludicrous notion of a giant robot finding a human female lovely. Secondly, Meadows doesn't do the standard Fay Wray thing of reciprocating the love of the monster, she's a hard nosed professional in it for the story.

It's also worth noting at this stage the idea of finding a brontosaurus in a swamp in pretty much directly lifted from the 1985 film Baby: Secret of the Lost Legend. As it's a film I've never seen what similarities, if any, there are beyond this are unknown to me, but considering Furman has already displayed culture vulture tendencies the odds are it's intentional. This is just about the only time Furman does a homage of something that has otherwise been forgotten by the 21st century, suggesting his instincts for this sort of thing are pretty good. 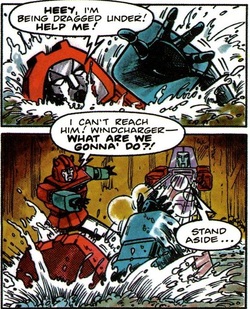 I aint getting in no swamp fool.
The other two strands of the plot are where the real fun is. The first sees the Autobot A-Team (yes, Furman so went there) of Gears, Cliffjumper and Windcharger having a nice day out in the woods. It's so nice to see these three minor characters, especially Cliffjumper in his only real featured moment in the comic. They pretty much regard the mission as a minor bit of fluff and are in a relaxed light mood that's a lot of fun.

The location itself may be set in California but doesn't conform to what most Brits would think of about that state. Rather than LA or the dust bowl 99% of Star Trek episodes filmed in we get something that would feel more at home in Deliverance.

Perhaps more pertinently though, the swap location, police boat chase and Cliffjumper quipping as he uses his gadget is very like the Louisiana scenes in Live and Let Die. And again, considering that in more recent years Furman has gone nuts on the Bond references, I'd say this is almost certainly deliberate as well.

The third plot is the real dark stuff. Someone- and the issue presenting it as a surprise reveal might seem a bit odd when there's only one possible group of suspects but it still works- is also going through the swamp asking Dinobot related questions. In a way that makes the death of the security guard back in issue 45 seem like light relief.

Yes, Soundwave- for it is he- and his team systematically kill every human they are seen to meet. With Kitson throwing himself into broken bodies and pools of blood. It's almost a shame this clean slate would later be retconned by Meadows "Getting better" and becoming a recurring character. Perhaps Soundwave fancied her as well? However, it's still insanely dark stuff that not only solidifies Soundwave as the no-nonsense Decepticon leader but has the highest on-page (i.e., ignoring stories like Deathbringer where the death toll must be huge but we don't see it) human death count on any Marvel issue before G2.

Insert your own joke about this having the highest death count of any A-Team story as well. 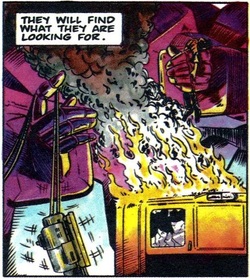 Soundwave breaks his toys.
Meadows surviving this is however, generally a good thing (her camera crew might be the same one as in The National Interest as well, but whilst the last time we see her here she could just pass as unconscious they are, at best, in wheelchairs for life). The book's treatment of female characters to date has been pretty poor, the other two to recur being a nudist psychopath and a leotard wearing teenage girl whose only purpose is to tell Buster how great he is. One with a bit of nonce is more that welcome.

The climax sees all three plots converge. The Decepticons find Sludge and blast him down before sneaking up behind the A-Team and taking them out as well (insert your own joke about Gears and co escaping from their cell next week by building a tank out of junk), ending with a full page dramatic reveal of team Soundwave, with the leader getting some good gloating practice in for his big moment. Those who have read the whole story know the one I mean.

It's a great cliffhanger, one so good Furman will reuse it wholesale in the first Matrix Quest issue. It's also nice to see Skywarp and Scavenger by his side. Not only because the Constructicons have been strangely absent so far this year but because it starts the admirable Marvel trend that subgroup members won't rigidly stick to their own team mates but will be allowed to hang out with other characters and have solo adventures.

On art Kitson, who is clearly the main go to artist for the book at this point, again does great work. He's helped by the cast of characters being small meaning we avoid his usual problem of odd generics. The colouring though is unusually poor. Credited to John Ridgeway (though apparently Stuart Place worked on it uncredited) the use of block colouring on the opening page and the very dotty nature of the colours in general make it feel more Nel Yomtov than anything else the UK stories have given us so far. I'm glad Ridgeway normally draws the book instead.

However, this is probably overall my favourite part of Dinobot Hunt!. It's got a huge amount going on, manages to successfully weave three very different plots together and escalates the threat of the previous issue. All backed up by some fantastic imagery and deft little character moments. I love it like Sludge loves a peroxide blonde. 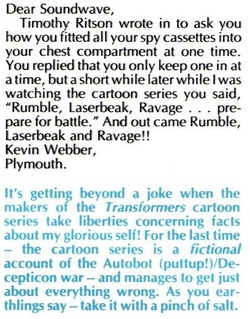 The cartoon: Just plain wrong.
The most interesting thing about the rest of the issue is Soundwaves, where Furman has clearly become properly cheesed off by the number of letters asking about the cartoon he has no control over and has Soundwave go one step beyond the previous stance of "It adapts the real facts loosely" and call the show- to all intents and purposes- crap.

There's also something that will be familiar to readers of future Annuals, as we get the first of a three part check-list of the various cast members of our series, this time on the Decepticons. With a clear sign of how muddled the issue will become there's no less than three Decepticon leaders listed despite us not even being two years into the run.

Meanwhile, Iron Man has a slower paced talky instalment that has one great gag in it where a New York hood can't go five feet without some superhero or villain roughing him up for information on his underworld contacts. Which is not only funny but gives us a rather sweet random Daredevil cameo.

Matt and the Cat has what looks worryingly like a Chromobot show up as a guard... or something. The will to live has faded there.

Next week... Well if there's a yang for every yin and this issue was my favourite in this story then Part 3 is its opposite. Modern cowboys. Sigh.

Insert your own Brookback Slag joke. 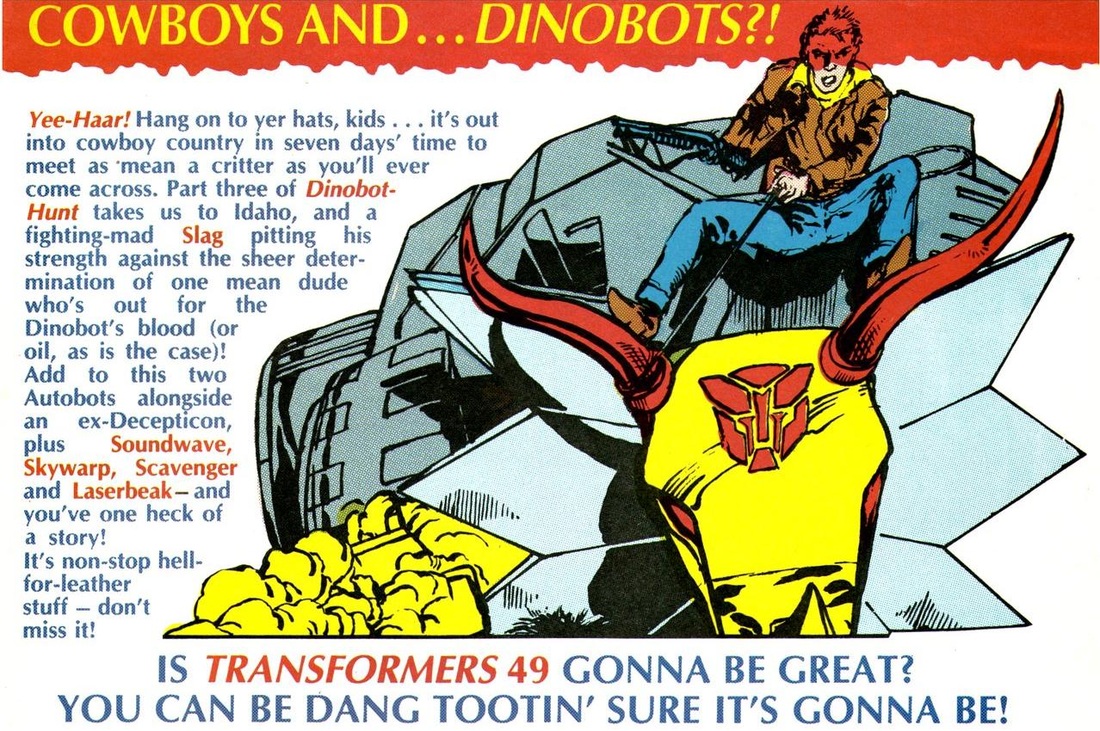