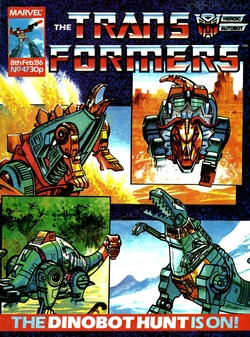 
Uh-yeah. We're sorry he caused so much trouble.


This week we get an important stage in the development of both the comic as a whole and Furman as a writer. Not just because Dinobot Hunt is widely seen as the first UK "Epic" (though as discussed, it's more another link in the ongoing chain of the fiction) but because it débuts a style of story we'll see over and over again across the years.

This is, for want of a better term, the Anthology Epic. A story with an overriding link or theme, but with each issue being basically a standalone focusing on different characters. It's a device Furman will use in Matrix Quest, Perchance to Dream, Aspects of Evil, the first six months of the Titan movie comic and IDW's Revelations Spotlight series. Though that last one was less a deliberate plan and more Furman falling back on a favourite trope in a time of crisis.

The appeal of such a type of story in a tie in comic is fairly obvious. It lets the author focus on one storyline for weeks/months whilst still rotating in as many of the toys that need to be promoted as needed without it feeling forced or for the story to stall as the new characters are brought in. 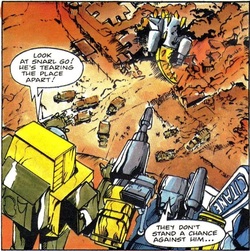 Trailbreaker!
Changing location every issue also adds to the scope, even in the comparatively small scale Dinobot Hunt we're going to range all over North America and a varied number of visual locations. Future stories will have the entire galaxy (and frequently history) as their backdrop.

Plus, if you want to be cynical, it can let the writer tread water, just doing variations on the same basic issue four or six times in a row before the big climax, just changing the leads and background each time. Thankfully Furman will mostly avoid that trap (Matrix Quest coming closest to succumbing), usually finding ways of ensuring each chapter brings something new to the table that avoids a straight rehash.

Dinobot Hunt! is a good case in point. Theoretically it could have been the same issue four times with a different Dinobot up to slightly different mischief each time. Instead, as we'll see over the next month, even the weakest instalment will work with the format and perspective to stop things getting stale.

In this first part the lead Dinobot is Snarl. Though his character is pretty much incidental to the plot due to the whole being nuts thing at least some thought has been put into using his special attributes, in particular the desert location fits in neatly with his solar panels.

Perhaps surprisingly the real highlight of the issue is is the human supporting characters. Starting with a simple grunt who gets caught in Snarl's rampaging wake through the Nevada desert. Coming only two weeks after the last time a human was killed by an out of control Dinobot there's genuine tension as the normally overlooked red shirt desperately thinks of his wife and family and genuine relief as the B Team (considering the year I suspect a deliberate gag on a certain popular TV show) of Autobots led by Mirage save him.

The main human guest star is General Carl Thompson, the first, and possibly only, military character in the series to get both a first and last name. As the commander of an army base so secret it doesn't exist this proto-X-Files conspiracy stuff is years ahead of its time and even manages to subvert what will become cliché, much as the first Bay film would by making Simmons and Sector 7 comedy idiots. It's surprising, and rather sad, that in more recent years Furman has played the men in black style completely straight with little flair or imagination.

The subversion here is Thompson is bored out of his mind with being a spook and hates the purpose of his base to develop a new bomb. So he actually welcomes a giant rampaging stegosaurus attacking, and not only gleefully follows his orders to destroy his base (knocking out Snarl) if threatened but even thanks the rather sheepish Autobots for giving him the chance to do so. It's something of a shame this potentially fun new ally would never be seen again.

On the Transformers side of things, it's really nice to see Trailbreaker, a character Marvel will almost completely overlook, get to be part of Mirage's team along with Brawn. Indeed, this whole story will give many of the lesser lights a chance to shine, and the three Autobots here get to work well as a team in a no-nonsense way. Considering it would be very easy to make this all about the awesomeness of the Dinobots that's a very nice touch.

There is however some inadvertent comedy in the flashback to Optimus briefing the various teams that will be under Prowl's command out in the field. Showing a worrying tendency to micro-manage Prime's lecture is accompanied by holograms illustrating everything he says for the more hard of thinking Autobots present. Which is at its most ludicrous when he gives his standard "We must protect the humans" speech and shows a hologram of a man, just in case anyone has forgotten what one looks like.

The issue ends on a sinister note, that hints at how Furman will be keeping thing fresh over the next few weeks, as it turns out Laserbeak has been watching everything. DUH DUH DUH.

I've been harsh on Will Simpson's art before, so credit where it's due as he's a perfect fit this week. One thing he'll turn out to be really good at is mad, vacant faces, meaning his Snarl is genuinely scary. His scratchy style also perfectly fits the location of a desert storm.

This week's back up strip, From the Ashes, does indeed pick up on the end of the previous Iron Man story as it turns out Tony wasn't drinking alcohol and just plans to regroup before dealing with both Doctor Octopus and his critics.

The rest of the comic sees Marvel really keen to pimp out Secret Wars II and yet another question for Soundwave asking about Jetfire's allegiance. Furman must be getting really sick of that one as we're just two weeks from the comic addressing it directly.

But first, we've got a wet King Kong to deal with as Sludge and his extremely randy love for a TV presenter takes centre stage. 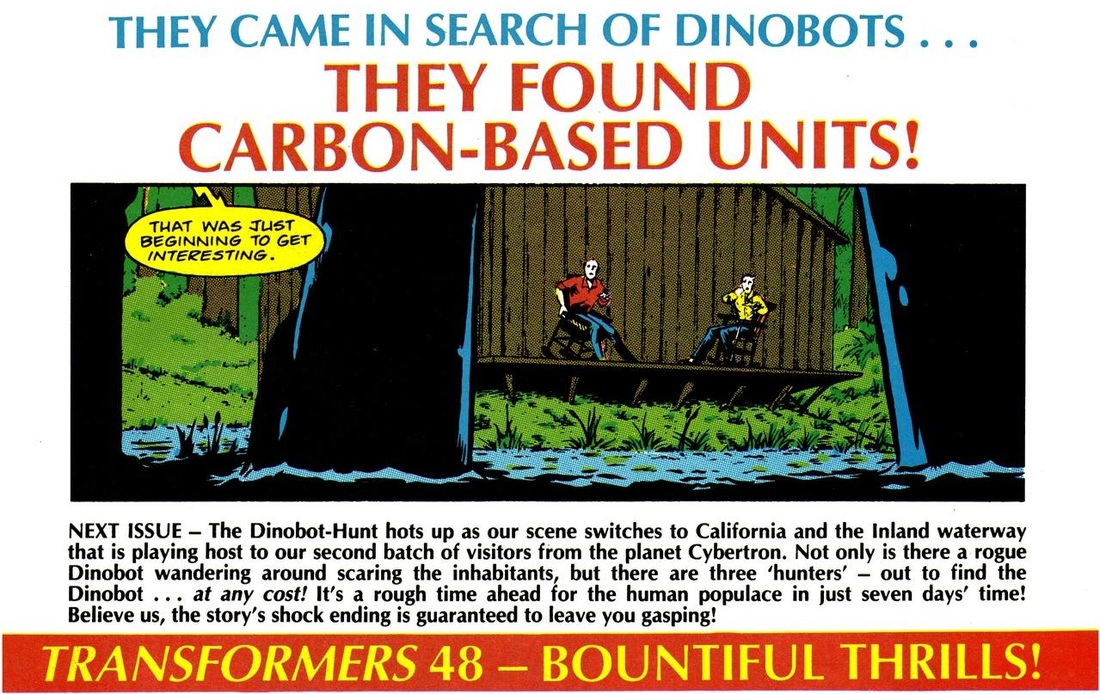