Sweet Dream, Or a Beautiful Nightmare? 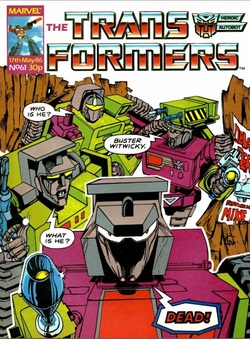 
Wow- such enthusiasm! This calls for a major reassessment of your appeal, Jessie ma girl!


Oh calamity of calamities, I got most of the way through this week’s entry when my tablet had a funny turn and I lost the whole thing. Word after painstakingly considered word gone forever. You now have to cope with my attempts to recreate it from memory, but frankly it's not nearly as good. The original would, I firmly believe, have led to lasting world peace; this will barely sort out the Middle East.

There's another one of those little ironies to be had in the fact that right after a story that bent over backwards to try and keep Barry Kitson on the book we get one with the artist from this period Furman would have quite happily seen the back of (and indeed, Will Simpson will depart around the same time Furman becomes editor proper and has final say on these things). This week it's hard not to see Furman's point, we open on a spread of a gangly armed Devastator smashing a junked school bus that's insanely large, especially if you compare it to how Ironhide barely comes up the combiners knee at the end of the issue.

I'm not generally a huge Simpson fan at the best of times, but, whilst he does better with the action scenes, this really isn't up to his usual standards and the first half especially looks very rushed. The low point being when Buster, just awoken from a nightmare, suddenly looks like pre-mask Jason Voorhees on an off-day.

The art however, is not the only problem. This is, to all intents and purposes the beginning of a four part story (discounting the conclusion of Second Generation as it's basically a standalone, as we'll discuss), but it's one that could easily have been done in three, or if you really pared it down to the bone, even two. These first two parts will tend to get all the good bits, but the net result is an author being required to do a special teams promoting story he's not all that interested in and having to drag it out beyond its natural length. Presumably to closely cover the period over which the toys were initially released. This will not end well.

Odd art aside, the opening is actually fairly strong as we see Soundwave put Devastator through his paces and Shockwave comes to give them orders to collect Buster. Whilst still something that takes up more space than it should, we're shown Shockwave is still reeling from what happened to him last week, not through exposition but just in the way he's written in a very terse, slightly too quick to anger way. It's very nicely done. 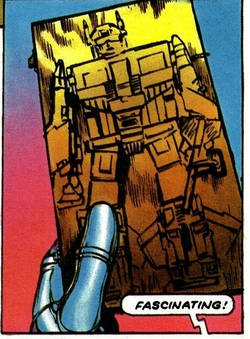 Buster prefers toy accuracy.
What follows is the first instance of what will become a surprisingly common Transformers plot, one you can see used in The Rebirth and which forms the basis of the entire arc for Beast Machines. This sees the Matrix and/or Vector Sigma want to introduce an amazing new era for the Cybertronians, but rather than putting out a post it note saying "Turn on the plasma energy chamber!" or "An organic Cybertron would look pretty cool, am I right?" it sets in motion a really contrived chain of events that takes five times as much effort and will often involve letting Mega/Galvatron come close to total victory.

Now, fair enough, convoluted is often better for drama than straightforward (just ask J.J. Abrahms, though you might want to suggest to him he have a really good ending worked out in advance next time), even if I did think Beast Machines was pushing it by having the plot retroactively go all the way back through Beast Wars. Plus, as a bonus, there's a possible get out clause here to explain why the Matrix jumps through such hoops here to bring about the creation of the Special Teams as the mental link with Buster may have thrown it off-kilter.

Thanks to his remaining Matrix mojo Buster is having nightmares about Superion, resulting in a fun sequence very like Sam's antics in Revenge of the Fallen, as he feverishly scratches a drawing of everyone's favourite plane based Autobot team into his door.

Sparkplug's reaction to this is strange, managing to both be perfectly in character and out of character at the same time. In character because as a caring father as he tries to downplay things to keep his son calm, distracting him be sending him and Jessie to the demolition derby before getting to work on the door. Yet out of character because not only does he take the drawing to the Ark (remember, the last time he was there he had a flamethrower induced heart attack) and is generally pally with the Autobots, even becoming part of a very odd comedy couple with Smokescreen. This is especially jarring when put next to his behaviour next week when he snaps back to normal.

After a fairly perfunctory scene at the Ark where Optimus and Wheeljack squee at Superion things pick up as Sparkplug and a team of Autobots arrive at the derby. We get some extremely silly but still good fun comedy interaction between Smokescreen and Mr. Witwicky that culminates in the human being accidentally squashed by the Autobots facsimile construct. It's also nice to see Brawn on the team as well, even if he doesn't do anything but sit there.

Next week they do Who's on First.
Inevitably of course one of the Autobots has to join in the carnage (Smokescreen again, he must have a good agent, though Ironhide gets a good grumpy old man reaction), though this is perhaps surprisingly brief. Skipping over that part is understandable in a certain sense as such derby’s have never been as popular in the UK as in America (where, like urban cowboys, they were a popular setting for '80's TV shows, with both The A-Team and Knightrider basing episodes around such events. Hell, The Dukes of Hazzard was basically a cross-country version), but it does wind up feeling like Furman came up with the punning title first and then couldn't think of what to do with the location afterwards.

Luckily we do get some more nice comedy as the Constructicons arrive and cheerfully fling the doorman aside before deciding the carnage of the derby makes it their kind of place. The issue ends with Devastator rampaging as he attempts to locate Buster, but the actual cliffhanger is closer to home as the boy suddenly collapses in pain in Jessie's arms...

This is a very disjointed issue that has several nice moments, but is also very all over the place (I've not even mentioned the very brief subplot about Jessie feeling unwanted by Buster as it goes nowhere) and doesn't properly form a cohesive whole. You can really tell Furman's heart wasn't in it and he's not putting as much effort into the structure as he normally would. It's not the most promising start to this brave new era for the robots in disguise. 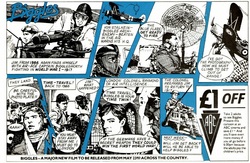 Biggles has a time twin. OF course!
Elsewhere, we get more Biggles, with yet more next week. Considering the film wasn't out in the UK till the end of May you have to wonder how many of the kids kept their ABC vouchers that long. It probably didn't help the abysmal box office.

We also get the usual suspects, including a Transformation page that reads more like a TFwiki entry (with a carefully annoted history of the Constructicons), Rocket Raccoon going rouge to fight the toy wars and Humph getting molested by a sea monster.

Oh, and this week's Cadbury's Wildlife bar animal is an elephant. I'm so good at this.

Soundwaves is especially interesting this week as it marks the point where the comic starts trying to hide the fact half of the stories the comic puts out in a year are American reprints, after previously having no problem mentioning their transatlantic cousin. David Ward from Leeds asks why the colouring in the lead strip was so bad (and even describes it as dotty like wot I do!) in the stories following issue 50, to which Soundwave replies that the creative team were merely experimenting with different styles. Which we now know is a letter of the law kind of truth even if it more accurately applies to last week. It's almost gallant that the UK team are trying to cover the flaws in the American printing technique rather than just laying the blame on Uncle Sam.

Soundwave also reveals the next Annual will be out around October/November time, which is surprisingly late for such books, and indeed later than last year’s was published.

Next week, the meandering continues as Buster's head continues to fill with those toy commercials with the scary kid who turns into a robot in them.