Looking For Adventure, and Whatever Comes My Way. 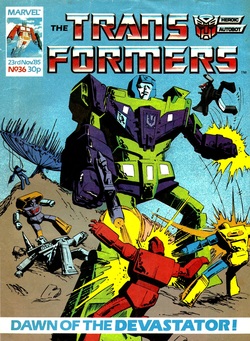 
"Gimmick" is often a dirty word in Transformers fandom. Despite the fact that many of the toys had some sort of secondary feature beyond merely turning into a vehicle; be it missiles, ejecting fists or even a whole trailer. But the dominance of poorly thought out additional play options in the dying days of the line (all the Masters, Pretenders, Micromasters, even beyond the original run and up to the present day with things like Mech Tech) has seen the idea become associated with desperation and failure.

If there is one BIG gimmick most fans do like though it's the first: Combiners. And with the first appearance of Devastator here we get our first ever sight of a mighty titan looming large over the other Transformers, striking terror into their hearts.

Except, despite that clearly being the intent, it's not really what we get. Fights between characters in drastically different scales is much easier to do in TV and film where the camera can pan and zoom through the action. It's something artists will get better at (one thing I've seen a couple of the original era artists- including Geoff Senior- say is they originally drew the robots at human size before being told to correct it. Which might seem funny to a modern mindset but it's easy to forget work at these scales for all the characters were pretty much unprecedented in Western comics at the time) but even today it's a tricky bugger to pull off.

Not exactly to scale.
Nowhere is this difficulty more evident than when we first see the Constructicons combine. Which is done in one small awkward panel. Grand is not really the word. Things are not helped by Devastator being a bit of a moron. It winds up being a less impressive début than his cartoon counterpart received.

Where, lest we forget, he was beaten by being confused by a hologram.

So if the main event bigged up by the cover is a damp Squib, what positives are there in this second half?

We do get a big important first, one I wasn't expecting to begin on Uncle Bob's run as it's more usually associated with the British stories: Soundwave takes charge. It's only a small scale mission to take over a satellite dish and send a message to Cybertron, but he handles it with cool calm efficiency. And, as will so often be the case when he runs the show, he wins. Despite his troops being basically useless. What a guy. This neatly gives the template for how the UK will handle him in early 1986.

The idea of him being plugged directly into the satellite dish to boost its power is also a nice early example of the Transformers as technology rather than just using it like a human would. It's a small detail, but it emphasises the alien nature of these creatures.

We also get some nice competent Autobots as well. Bluestreak of all people gets to lead the team (though Yomtov manages to colour him as Prowl throughout) and they employ sensible tactics through the battle and it's only Huffer's hesitation at the end which sees them loose. It's nice to have the good guys portrayed as capable without Optimus about, something that won't always be the case.

And mention of Huffer brings us to the B plot of his, and Bomber Bill's, longing to go home. Though it's an almighty coincidence that Soundwave is trying to contact home as well it does mean all the threads of the story dovetail at the end, which is a sign of a well structured tale if nothing else.

Ah yes. Bomber Bill. We've skirted around the main issue long enough. As established last week he wants to go home. So when the Constructicons steal his truck Bessie (almost certainly not a Doctor Who reference considering the third Doctor stories were fairly poorly distributed in America at this point) he goes all ape shit. 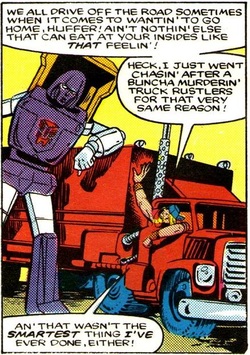 Today's Moral.
It's actually a fairly harmless sub-plot that keeps up Bob's mantra of involving recognisable human characters in everything. I'll even ignore the big question of why the Constructicons bothered stealing Bessie when they don't seem to need it in the end.

And yes, Bomber Bill breaking into Bessie to bust the bounders bloody... err... some word starting with B that means the same as plot... is incredibly cheesy. But it works in the context of him being a supporting comic relief character.

However, in terms of the bigger picture, it is really hard to ignore one fact. Everything involving Circuit Breaker in issues 33-34 was completely pointless. In an ideal world Repeat Performance! would have led straight into this story. With just a couple of pages given over to the introduction of the Blackrock/Autobot alliance. And the only obvious material that could be cut from this issue to make room for that is Bomber Bill's bits.

It's worth mentioning at this stage, that the reason for the heavy promotion of Circuit Breaker is Bob thought she'd be a breakout character. To the extent she was given her own totally random appearance in Secret Wars 2 before she first showed up in Transformers in order to ensure she'd be Marvel copyright rather than Hasbro (and a sign of how mind twisting copyright can be, it seem Marvel owns Josie Beller, even though both are exactly the same character).

So it is very hard to escape the feeling the story spent on her build up and introduction was nothing more than an irrelevant vanity project. Now, the UK and Furman will be just as guilty of the same with Death's Head. However, that's one vanity project that will be made to work in the title it's being introduced in. And unlike Circuit Breaker will actually make it to its own book. This may seem a somewhat cruel complaint, but it has to be said that the opening Budiansky ark would be much stronger without his pet project and at one issue shorter. 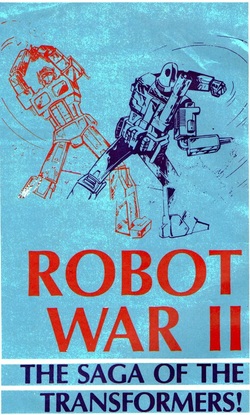 As a random aside, whilst double checking the spelling of Josie Beller (yes, my eternal shame, I can never remember from one week to the next exactly what her name is) on the Wiki I was led to the page for the Shattered Glass version of G.B. Blackrock. Amusingly called R.J. Blackrock he's apparently a businessman who dresses casually but is more concerned with making money that being cool.

Which is exactly the same as G.B. Blackrock is at this point in the original series. Hell, the guy who only last issue was getting a hard on for the technology he could steal from the Autobots has even been known to dress fairly casually with his open purple shirts and big gold medallions. It really does feel like whoever came up with this character has a deep rooted misunderstanding of the whole (admittedly rubbish, so kudos to the creator if they just went “This is crap, I'm doing my own thing!”) “Opposite” parallel Universe thing Shattered Glass is supposed to be.

The big thing in the rest of the issue is Robot War II. Which is pretty much the same as the original Robot War from issue 22, but with more recent events added and some not relevant to the current story curtailed (mainly UK stuff sadly). It does feel slightly odd to present this with part 2 of a story when the natural point for such a “Bring on the new readers” initiative would be the opening instalment. On the other hand though, having it now means Matt and the Cat has to be dropped this week, so yay! Sadly we have to loose the Next Issue box as well (we do get a shortened version on the Transformation page however, so not all is lost) but that's a price worth paying.

The Machine Man of the far flung year of 2020 really starts to strain credibility when he runs into yet another of the ongoing characters from his original book by pure chance as Gears Garvin turning out to be the Ancient Wrecker ( still not to be confused with an ancient Wrecker like Impactor). You have to wonder if the kid he stole that Superman mask off will be turning up next as a bitter 40 year old.

Next week we see the fat stripped off this storyline, no distractions with comedy (or potentially lucrative in the eyes of the writer) characters, but straight down the line plot. Mostly. 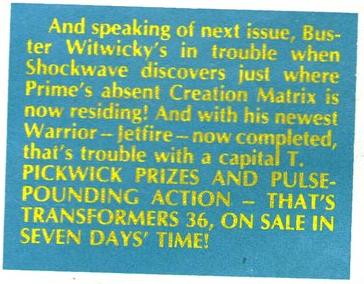