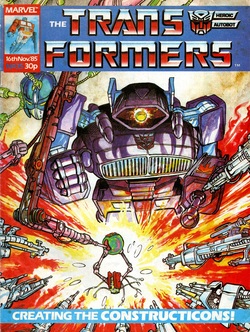 
I think my 'stache was singed!


First a correction. It's been pointed out to me since last week that, as it was made directly by TV AM, WACADAY and its associated programs weren't technically part of CITV. Which totally ruins my introduction to the previous issue. Curses.

Here in issue 35 Optimus Prime is also having to deal with his inadequacies. Things open with what, for those keeping count, is our third Shockwave gloating over Optimus scene. But unlike those we've had before and the many to follow this one has some real bite to it as it sees the creation of the Constructicons.

This is a first for the comic, we've had new characters introduced before (Shockwave and the Dinobots from the American comic, whilst it fell to Red Alert to be the first to show up in the UK) this is an almost unique sight of the actual creation process, something we'll not see again in such depth.

Though it's not yet crouched in the mystical terms that will envelop it one day; the Matrix is still a computer program and there's much talk of microchips and electrical energy; there's still a clear effort to show that what makes a Transformer "alive" is far more than what you'd get from just building a robot. It's not quite at the stage of them having- to all intents and purposes- souls yet but there is more to them than just circuits.

The Constructicons are also the first Transformers to be born on Earth. This potentially has huge implications but they'll be completely ignored. Indeed, of all Earth made Cybertronians who'll be introduced between now and the Space Bridge being created (meaning new toys can just be brought over from Cybertron rather than needing special origins) only Jetfire, who débuts as a mindless shell here, will more than a tokenistic exploration of their Earth born nature.

As is typical for Uncle Bob, this great act of creation is seen through the eyes of some human characters. In this case two of Blackrock's worker offer their wry comedy on events (and more importantly, help out with the recap of the story so far). One even has his moustache slightly burnt by the fiery power of the Matrix. 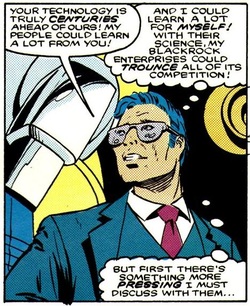 Clean shaven Blackrock.
Speaking of facial fungus, the other strand of the plot this week sees “Call me G.B.” Blackrock given a tour of the Ark by Prowl. Even though the implication is that this takes place immediately after the last issue (as Jazz is only just being fixed) Blackrock has for some reason taken the time to shave off his iconic 'tache. Perhaps he was sick of constantly being mistaken for Robert Culp? He's also a bit more of a bastard than he'll tend to be remembered for. Gleefully thinking of what he could do with all the Autobots technology and bugging all the phones in his factory. Which is a useful McGuffin for future issues but does make him seem the boss from hell.

What's really interesting about the tour though is two very different moments. One of which emphasises the alien nature of the Transformers and other that shows that they are more alike than unlike us despite being robots.

The first reveals that Jazz is capable of turning off his pain receptors so he can loose an arm and be operated on without any fuss or bother. This is in keeping with the portrayal of Gears when he fell apart in issue 6 and shows the very different attitude our heroes have to death and pain. It's also an ability that will be completely ignored in future, but hey ho.

It's also worth noting here that we get the first indication that Jazz' visor is just a fancy cover for his actual eyes which we can occasionally see peeping out from under it. It's something of a silly idea, but Geoff Senior will later own it. 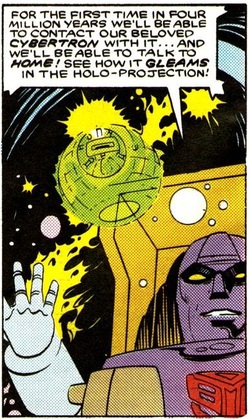 Huffer Phone Home.
After a brief but rather horrible looking glimpse of the impossible to repair Sunstreaker, the second moment has Huffer feeling incredibly home sick for Cybertron, trying to fix the SPACE radio so he can call home and looking longingly at a hologram of the planet.

I've said before that, of all the non-Bumblebee mini-bots who could have got some focus Huffer is a strange choice when he has virtually the same personality as previous recipient of the honour Gears. But it's a rather sweet melancholy moment that shows that many of the same concerns and fears that affect us are still there in our heroes.

All of this is just a warm up for the main event though. Yes, Bomber Bill has arrived. Oddly someone at Marvel UK must have felt the page introducing this titan of truckers was too much for kids to handle as the cliffhanger, so the order of a couple of pages has been shifted so that the issue ends on the less exciting moment of Buster worrying about his new powers rather than Bomber Bill ordering breakfast.

Considering my outright disdain for Circuit Breaker you might expect me to be really down on Bomber Bill. But the fact he's just a normal guy and not naked makes him rather more endearing. Plus, considering the original Optimus Prime toy was clearly designed with a rather romantic view of the American trucker in mind, having one turn up in person is rather overdue. 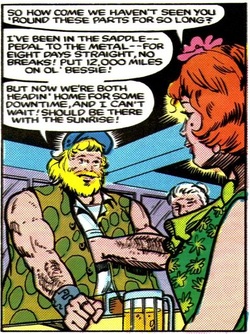 The man, the legend. Bomber Bill.
Exactly what plot related purpose the character will serve isn't entirely clear here, but with an obvious parallel between his urge to go home and see his kids and Huffer wanting to get back to Cybertron it's fairly likely the two will meet up at some point in the second half. Probably in a way related to the mysterious mission Shockwave has sent the Constructicons on. Which I'd have mentioned earlier but Bomber Bill has pretty much blotted out everything else in the book.

Elsewhere, we have our first advert for the Winter Marvel specials, including the second Transformers one, plus a rerun of the Save The Children fund-raiser.

Meanwhile Soundwaves sees Furman...err I mean Soundwave playing with the format a bit by “Saving time” by not putting “Puttup” after every mention of an Autobot but instead leaving a gap for readers to fill it in themselves. It also remains the only part of the comic flying the flag for the first Annual.

A question about a Guardian toy also shows one interesting side effect of comic created characters. With so many “Proper” Transformers not getting a release in the UK (Shockwave, Swoop, Omega Supreme...) and so many characters who were especially made for the comic (usually to die) it will become quite hard for young UK fans to know which of the robots they're reading about have a toy, which have a toy but they can't buy it and which don't have a toy. This will be a steady source of questions for a long time. 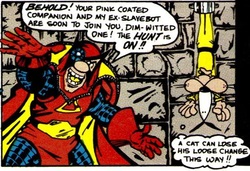 I just like to see that bloody cat suffer.
Machine Man shows Madam Bain is just as genre save y as the Wrecker they've let escape as they know she knows it's too easy and have actually planted a tracker within her so that her efforts to shake off the pursuit she's expecting are completely futile.

We also get Arno Stark ably demonstrating what a complete and utter magnificent bastard he is. It's easy to see why he became so popular with readers.

Next week Bomber Bill tries to make his home run, and nothing is going to stand in his way. 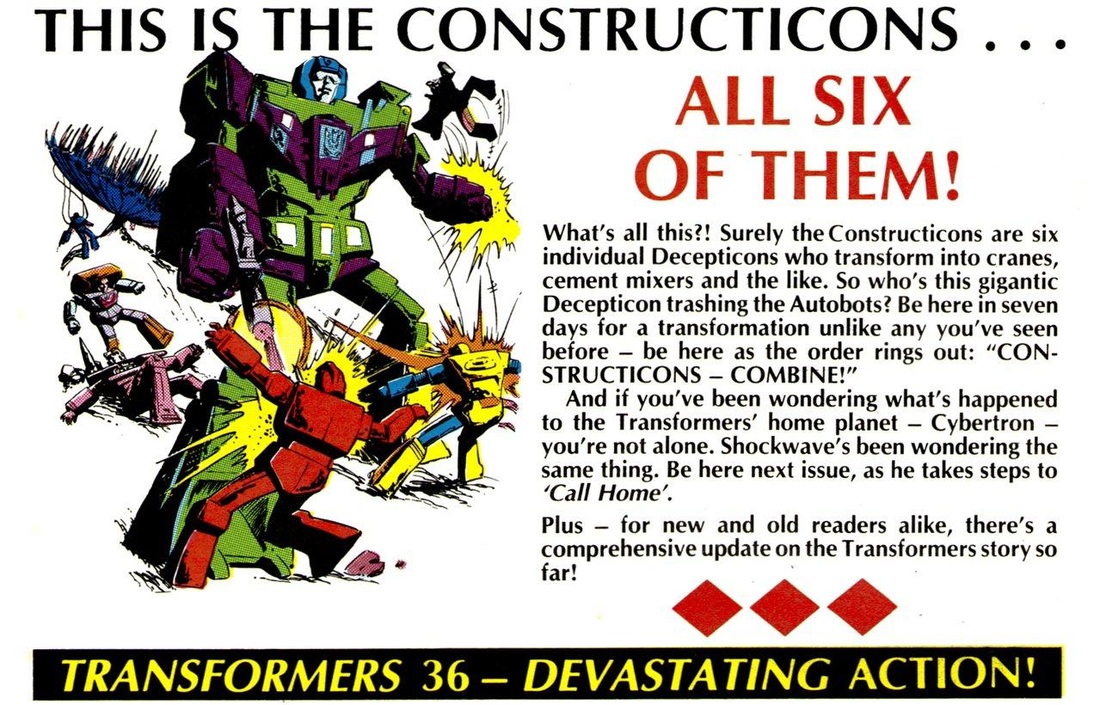