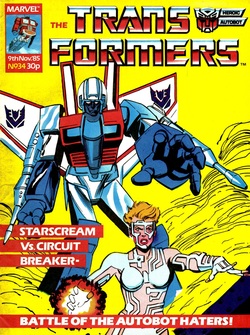 
If I were a Decepticon I would've let you bounce me a couple of times before scraping you off the ground!


Here in early January 2013 CITV is celebrating its 30th birthday with the digital channel (sadly all that's left of the former early afternoon-on-proper-telly monolith) running a full weekend of “Old Skool” programming. Mike and Angelo; Supergran; Woof; the Kristian Schmidt version of The Tomorrow People (not on at the time of writing, but it's going to be the one with Christopher Lee surely?).

It's worth mentioning here because, even though no episodes are being shown (as the weekend is celebrating home-grown British shows only) the original Transformers cartoon- and indeed Beast Wars... and possibly Armada? Though I don't think anyone noticed that last one- was first broadcast in the UK as part of CITV program blocks. In the case of the former when invading TV AM for The Wide Awake Club and WACADAY.

So happy birthday to the means by which Soundwave was inundated with letters confused by the difference between the series and the comic. That just makes me feel old. Not helped by the sound in the episode of Supergran currently on being so poor I'm not entirely sure I'm not going deaf.

Generally the purpose of this blog is to be positive. So lets look at the good bit of the lead story first. The Autobot's need for fuel was such a big part of the initial mini-series it's nice it hasn't been forgotten and steps have been taken to ensure the Autobots get all the fuel they need from their team up with Blackrock. 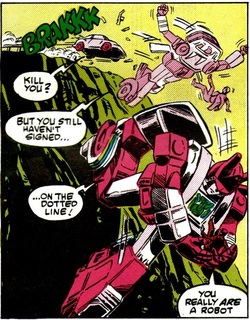 Negotiations... Jazz style.
The scene where Jazz convinces G.B. is insane, involving as it does kidnapping the industrialist; driving him around like a lunatic whilst he explains the Autobots are the good guys and revealing that Decepticons like to be “Bounced” by humans. Way hay. Amazingly Blackrock is convinced by this and agrees to an alliance. It's completely daft, but rather sweetly so and the bat-shit insane feeling is added to by a repeat of the colouring problem from last week.

Everything else though... eurrrrrggghhh. Circuit Breaker is surprised that Blackrock doesn't want to use her as his one woman robot killing army. Something that so annoys her she vents her fury on a robot toy he has on his desk. Perhaps it's Amazon's version of the new MP Prime toy and she's one of the folks that are really annoyed by the pricing mistake? [Now there's a reference that won't make any sense to anyone reading IN THE FUTURE].

The only real useful bit of information is that without her sellotape Breaker's arm is as limp as the average fanboy after spending some alone time with the spread page that closed the last issue.

Things get even sillier at the Speedway the next day though. Blackrock has specifically asked his security to keep an eye out for Circuit Breaker. A woman who is either completely naked or dressed as a 1940's private eye. Hardly someone who blends into the background even without taking her highly noticeable flying ability into account.

But she still manages to walk right up to the new super robot smashing weapon and zap it so it doesn't work. Blackrock really needs to invest in better people.

Circuit Breaker's cunning plan is that by destroying the weapon Blackrock will have to unveil her as the real weapon to avoid public humiliation. Somehow, if Richard Branson's first space-plane fails I can't see bringing a naked chick out would be the only possible plan B; yet Blackrock thinks the only way people won't laugh at him is if he suggests a stripogram could take on Voltron.

This is the point where Starscream and Frenzy attack. And lets give Bob some props for what is likely a nice subtle joke in the magnetically-powered Circuit Breaker going up against a cassette. But this is also the point where the real flaw in her character; one that we'll see over and over again comes into play.

Now, one of Circuit Breaker's big things is she is so twisted she can't tell and frankly refuses to believe in any difference between Autobots and Decepticons. That in and of itself is fair enough, but nearly every single time she's caught between the two groups she will invariably attack the Autobots instead of the Decepticons regardless of what the later is doing.

So here, Frenzy and Starscream attack first and she does nothing except stand there looking gormless. The very second Jazz transforms she attacks him. It's hugely contrived and just makes her look stupid. If she's going to hate everyone equally she should try and kill them all equally. It takes a direct attack from the Decepticons before she bothers to do anything about them.

Thankfully things are brought to an end by Blackrock asking her to bugger off. She agrees, but now considers all her debts to him paid as a result. Everyone then stands about looking mildly confused, except for Wheeljack. Jazz and Starscream are still standing after being zapped by Circuit Breaker but the scientist is so embarrassed he's decided the best thing to do is just fall on the floor and pretend to be dead.

But yay for another printing problem page near the end. Though worryingly it makes Circuit Breaker's bum look completely naked in a way it hopefully didn't in the original (on the other pages her...groin area is the colour of the sellotape, on the mis-colour it's the same as her flesh).

Though it should be fairly obvious by this point, this is by far the weakest issue with US content in it to date. As a whole the good stuff with the Autobots in the first half does raise it up somewhat, but this instalment is just incredibly embarrassing. Almost entirely down to the Circuit Breaker focus. And this is a character who will be with us, on and off, till the very last issue.

Soon to be a cult favourite.
The rest of the issue does raise some smiles. First in a letter to Soundwave from the marvellously named Mark Alzano bemoaning that his father thinks Transformers is silly. That's pretty much what I had to put up with from my mother for twenty years before the Bay films suddenly put the franchise properly on the radar of older people.

Soundwave also mocks Machine Man's name. But his story this week introduces a character who will go on to have a bit of a cult following in the UK, mainly thanks to some of his adventures being reprinted in this book. Arno Stark- The IRON MAN of 2020.

Rather sweetly, his costume looks less futuristic than what Tony Stark is currently wearing in the 2013 comics, with an almost steam-punk feel to the clock style gears on his shoulders. Along with an Errol Flynn moustache on Arno himself it makes for a charmingly retro look to Tony's nephew.

Two weeks ago I, in a slightly tongue in cheek way, pointed out the use of the name Wreckers in this story, but it's also worth noting that Arno- as an immoral mercenary for hire- is very likely a source of inspiration for Death's Head. As well as being a popular supporting character in a comic Death's Head's creator worked on he'll even go on to fight the Freelance Peacekeeping Agent in his own title, so Furman was definitely aware of the character and how popular someone with that attitude could potentially be.

The final page of the story is also a full page spread, which the comic rather neatly turns into a back page poster. Let us praise the Gods that they didn't do that with the similar spread of Circuit Breaker last week.

Speaking of which, we should probably be grateful the reused-American cover has been cropped slightly to remove Circuit Breaker's crotch. It's a really horrid cover as a whole though, and begins a trend where the British originated covers will urinate from a great height over their American cousins. The rather nice cover last week almost made Circuit Breaker look cool. Are All Dead certainly seems a long time ago.

Next week the wacky humans continue to invade the book like a cancer as Bomber Bill makes his début. Will the Constructicons survive him? 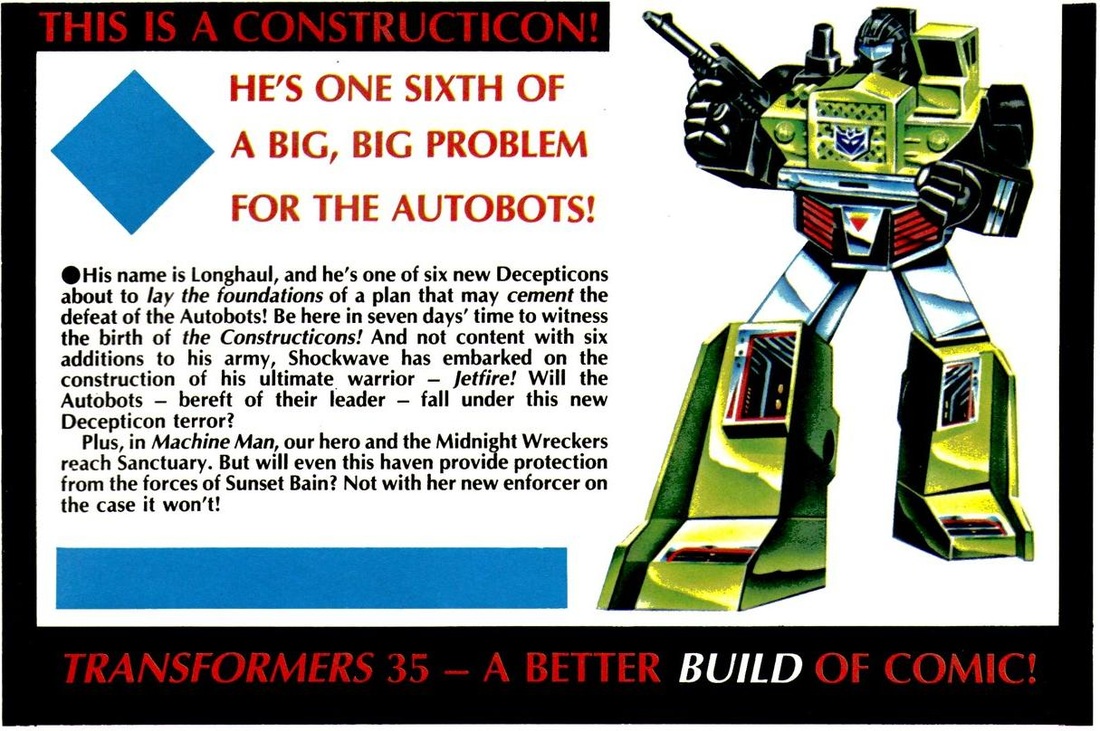