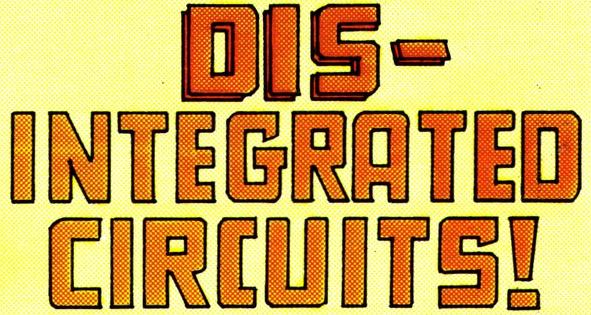 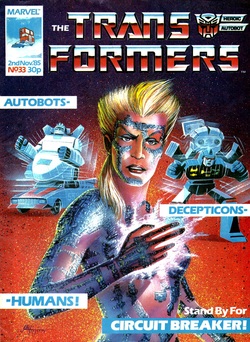 
As we return to the American stories after a particularly strong British two parter it's as good a time as any to ask one of the big questions about the Marvel run as a whole. Bob Budiansky wrote so much of the US series, defined so much of the Universe and always comes across as a generally splendid chap in interviews.

So why is he everyone's second favourite Marvel writer by a considerable margin? We've touched on some of the reasons previously (such as him being under much firmer constraints than Furman and they'll be a big one that becomes very apparent towards the end of his time where he goes ever so slightly insane).

But there's an additional- UK-centric- reason for Bob's work being looked down on almost from the start. And this is the point where it starts to become very apparent.

If you're reading just the American issues Dis-Integrated Circuits! is indeed a step down from Repeat Performance!, but only marginally. It's less streamlined and fully introduces arguably the worst reoccurring character the book will see.

On the other hand though, there's some nice character stuff, the various plot threads move on and there's some daft but entertaining silly comedy bits.

More importantly, it's also the template for how the bulk of Bob's run will be formatted. The heavy focus on the human supporting cast, the humour at the forefront and each issue will usually have a central self contained story with various secondary ongoing plots floating around it. With his first few issues on the book very much being required by the dead Autobots to be outside the format this is really where his run begins in earnest. An American reader that didn't like this likely wouldn't be around for very long after.

But if it's a slight stumble after the previous Bob story, it's a jump off a chair in comparison to the last two issues. The Wrath two parter was extremely focused, tense and exciting with levels of comedy that still work when reread through adult eyes.

By sticking to one tight plot focusing on relevant things that the American stories ignored it actually feels like it moves the series along more quickly despite being filler than a story filled with comedy human antics.

This is something that will happen repeatedly throughout the next couple of years, most of Bob's stories will be perfectly entertaining in their own right, but the run of brilliance the UK stories are about to embark on will continually make them look like the poor cousin in comparison. In a contest between an epic time travel epic crossing twenty years and some Arielbots fighting over a dam, who is going to come out on top? 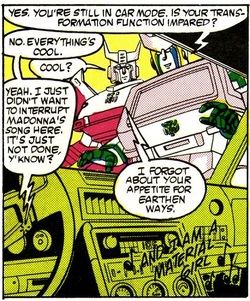 Totally rad dude.
The issue opens with G.B. Blackrock (who here is drawn like frequent Columbo killer Robert Culp) racing his very own sports car around his very own speedway. Leading into what will become the sort of stock Budiansky comedy sequence we'll become used to as he berates his assistant in the manner of a wacky sitcom star. The main purpose of the scene however is for the army to deliver exposition on Blackrock having built his very own anti-robot weapon.

What follows is especially memorable as it's the last time Josie Beller will be remotely tolerable for years. Blackrock's guilt is actually very nicely done, as is his horror at her ability to move metal objects with magnets. Savour this moment, it's going to be lean pickings from this plot for now on.

Back at the Ark we get a triumphant moment of all the Autobots back together again testing out their engines. It's nicely done (though it does make you glad the UK has covered the gap since the last story) and introduces Jazz' new character.

You remember Jazz, the guy who attacks humans with flame throwers and kidnaps small boys? Suddenly he's the cool down with fleshlings pop culture quoting dude who you can easily imagine being played by the bloke from The Shining. He even likes Madonna, in what is probably the one and only example of the generally middle aged writers who usually work on the franchise picking something that's down with the kids that is actually still popular a quarter century later.

This rather drastic personality change is lucky for the plot as Jazz now has the nonce to work out a plan to get the Autobots new fuel: Persuade Blackrock (who has made the papers with the promotion of the unveiling of his mighty weapon) they're really hip dudes he should help out in exchange for protection against the Decepticons.

This confuses Prowl, and does feel a bit like the fire-fighters union in Ankh-Morpork. You really can't see the Autobots ignoring any Decepticon attacks just because the owner of the target hasn't signed up for their protection racket yet. But, it gives the Autobots a plan and he and Wheeljack go off to do the “Hey, it's a real nice Speedway you've got here... be a shame if anything happened to it” thing. 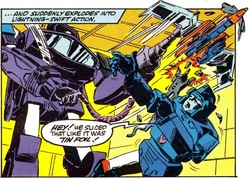 Eeek.
The Decepticons give us a lovely moment of a bored Frenzy tearing up the aerospace plant they're using as their base out of sheer boredom before Shockwave (sporting some fetching blue shoulders this week) scares the living crap out of him with Buzzsaw. The need for something to do other than watch humans build jets does ensure he agrees to send the cassette and a surprisingly sneaky thinking Starscream to destroy Blackrock's weapon even though he considers the threat minimal.

We then get Bob's first but British readers second “Shockwave gloats over Prime's head” scene. As said a fortnight ago it was slightly unfair of Furman to pre-empt this, but Bob's going to do enough rehashes of this himself over the next seven issues. Then we get the other bit of business copied back in #31 as Buster winds up repairing machinery by accident with his mind. Though pleasingly he does refer to this having happened before, meaning the UK take at least added another thing the American skipped.

That brings us to the end of the issue. Oh dear God. Josie escapes from hospital, dresses as a flasher and breaks into Blackrock's office before taking all her clothes off. Gah. Oddly enough artist Mike Manley spends more time on her tits than he has on most of the robots (or even getting “J.B.” Blackrock's name right on his office door).

“Circuit Breaker”- as she now likes to be known- must have one of the worst costume designs in the entire history of Marvel. Being basically nude but with strategically placed silver sellotape that apparently gives her amazing magnetic powers. After a generally solid first half, this cliffhanger is where things start to really go off the rails for this story.

Someone at the UK office must have been distracted by the lady flesh on display as several pages are affected by an odd printing fault that turns everyone into a G2 deco. This is actually an improvement over Yomtov's normal colours and hides one of his more notorious errors- If you can answer the question “What colour is Optimus Prime?” correctly you're a better man than him. 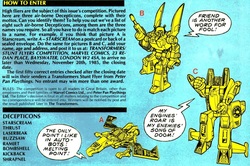 Just For Fun.
Bad perspective makes Prowl look like he has a midget leg in the November calender, there's a competition for some Transformers gliders and Machine Man nicely subverts the “Let them escape to follow them” cliché as the captured member of the Midnight Wreckers realises their getting hold of a gun was too easy.

But, as is so often the case, Soundwaves is the most interesting part of the rest of the issue as Ewan Johnson from Dartford points out Decepticon Dam-Busters! was “The same as” the cartoon series. Soundwave repeats the idea that the cartoon is just fiction based on fact, but this seems slightly disingenuous when the whole reason for doing that story was to bring fans of the show on-board.

Another letter from one Daniel Sadler from Brightling Sea reveals that the TV commercials for the comic had began airing by this point. This is especially of note as the desire to do specific commercials relevant to the issue's content will be the inspiration for the first story of 1986.

Circuit Breaker's crotch isn't the best way to end the 2012 entries for this blog, but I'd like to take this moment to thank everyone who has been reading since June. All the comments and thoughts and even the page hits themselves have been appreciated, and helped make me feel I'm not shouting in a vacuum.

With us only being a couple of months till we reach the end of 1985 and my coverage of the Annual, I'd been interested in hearing from people about how they'd like to see the hardback covered. With it being a big beast it could well do with a different approach so all thoughts in the comment section are welcome.

Next week we rock into the first entry of 2013 with yet more amazing Circuit Breaker action. Wow. 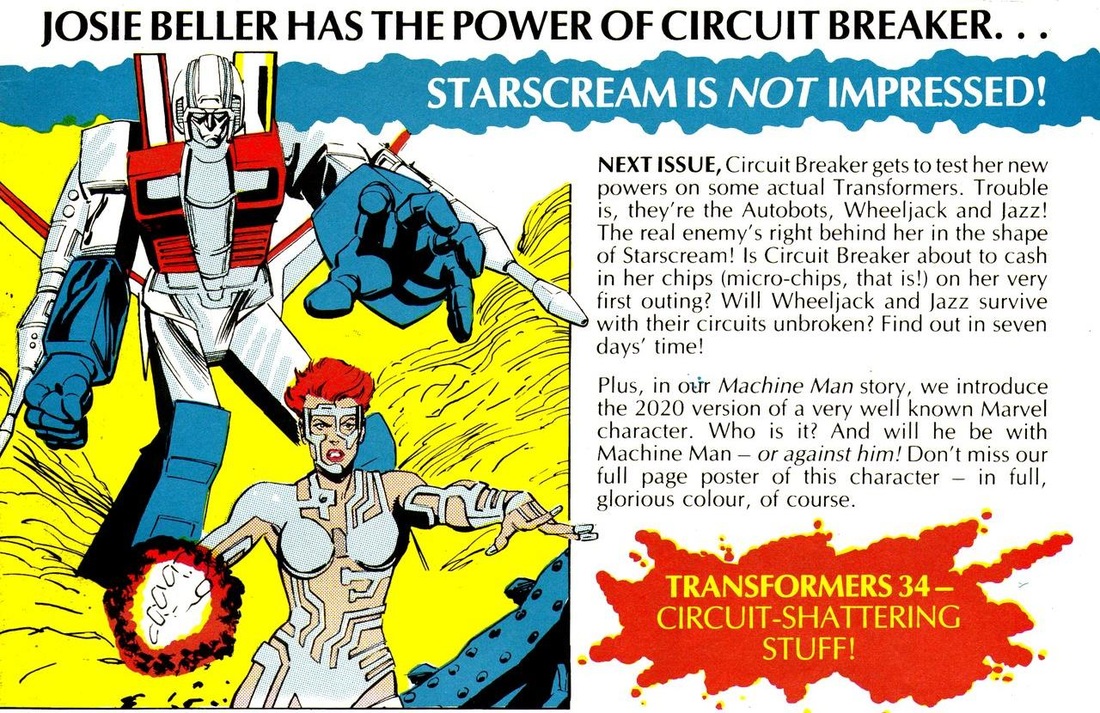