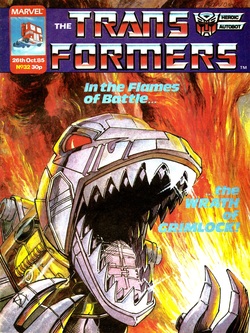 
"What's his problem?"
"The terminal sulks I think."


Furman is really having some fun with narrative structure this week, playfully bookending the issue with a 24 style on page ticking clock to ramp up the tension, in both cases ticking down to Guardian going phoooom.

Another sign of a writer knowing what he's doing is the elegant resolution to the cliffhanger. When we saw Optimus Prime's body throughout the first part it seemed little more than a means of keeping the ongoing plots in the minds of the reader, much like Buster showing up. The fact he was present at the climax likely barely even registered in the minds of kids encountering the story for the first time, making him a perfect headless headless Chekhov's gun.

This also gives Wheeljack his first big chance to do his mad inventor thing, something we tend to think of as his defining characteristic but which he won't get a lot of opportunity to demonstrate before the black and white days.

And, in a three for three, a week after the brain module was introduced as the main difference between a Transformer and a normal everyday robot, we start getting the implications of such a device. Without his head Prime is just a lump of circuitry Wheeljack can control at a distance.

This causes a mood change as the seriousness of the countdown is replaced with a brilliant comedy sequence of Grimlock not being able to shake off the grip of Prime's body as the other Dinobots take the piss mercilessly, resulting in his hand being ripped off. Kitson technically gets the scale badly wrong here but Prime being such a towering giant over Grimlock only makes it funnier. 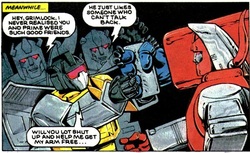 Mostly Armless.
The pay off to the gag is, after an apologetic Ratchet has reattached his hand, the pissed off Dinobot tests it with a right (or left depending on if you're reading the reprint) hook to the medical officer's face.

A fairly major first happens in this scene as Prowl and Grimlock are in the same room for the first time. They don't get to interact but, in years to come, Prowl will be the Cybill Sheppard to his Bruce Willis.

Or when they're badly written, the Mr Belding to his Zack Morris, but either way this is going to be an important relationship.

The issue actually closes out on what is a wonderful bit of understated black comedy, and an aspect of the story I've not seen commented on before. Ratchet is encouraged to repair Windcharger next by Prowl as he's the sort of guy who remembers continuity. Presumably out of guilt over the whole hand thing Swoop gets moved into second place as well.

The irony here is, that once Windcharger is up and about he's on the point of doing his magic magnet thing, which we know would safely throw Guardian miles out into the atmosphere where he can explode in a completely harmless way.

The just staggered up to his feet Swoop however doesn't know this and does something that on the surface is heroic but when you think about it for a second is actually a deeply stupid and pointless act.

Grabbing Guardian by the neck he flies out of the Ark and to a safe distance, but like Batman in the Dark Knight Rises is seemingly caught in the massive nuclear explosion that follows (so big, it nearly singes some trees. “Nuclear” is just a general bogey word here). 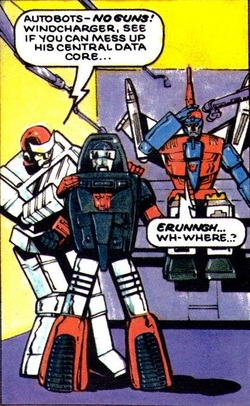 Swoop: Ruining your big moment since 1985.
Like Batman, Swoop will turn out to be impervious to nuclear blasts, but he'll still be extremely put out by what follows and the whole thing could have been avoided if he'd just waited three seconds for Ratchet to finish explaining what's going on. Swoop also denies Windcharger his last big chance to do what he does best and save the day, effectively condemning him to obscurity from here on in. He's probably overjoyed Swoop went BOOM.

Whilst all that is going on, the Dinobots get their revenge on Guardian by unleashing their full fury on him. Grimlock, living up to the issue's title, gets to pay back his own indignities by ripping off the drone's arm. This is a gorgeously drawn sequence, and, again, the inter-cutting of the countdown ramps up the tension.

The issue ends on a mix of sadness and hope. At this point neither the characters or readers had any reason to doubt Swoop was dead, and as such he's the first “Proper” character to be killed off. He's given a bit more attention than many of those who will follow are going to get, with a memorial service and one of those outside garden lamp things built on the last place he was seen (presumably safe from human interference as all the locals will now be dying horribly of radiation sickness).

The remaining Dinobots go off by themselves into the sunset, which will neatly explain their absence next week but also set up Furman's  follow up run in the new year. But, as IDW Swerve would say, that's another story.

The hope comes from Ratchet having repaired all but one of the Autobots (Sunstreaker as we'll learn) , with them now ready to take on all challenges and face the task of getting their leaders head back. Sadly Kitson fumbles the potential emotional impact of this page as (bar a vague stab at Wheeljack's head) all the Autobots featured are completely made up.

Having been a bit critical of him there though, it should be said that- in the flashback to the bomb being put in Guardian- Kitson proves he can drawn a bloody fantastic Shockwave.

Speaking of art, both this and the last issue introduced Will Simpson on covers. Never a particular favourite of mine (though undeserving of the scorn put upon him by Furman in the UK Classics books) these are still amongst his best work, with a nice scratchy quality to them.

One final thing to note on the story is that it ends by bringing back round to where we left off with the American stories by creating a new Kitson drawn version of the final panel cut out of issue 30, showing the birth of Circuit Breaker. Sigh. More on her next week.

Elsewhere, Soundwaves has correspondence from one Cornelius Barton. Which I only mention because it's easily the most awesome name known to all mankind. More pertinently, the less awesomely named Paul Sherwood writes in with his thoughts on the first Annual. Now, who the hell gets given their Annuals in October? They're supposed to be Christmas presents (and like a good boy, I won't be covering the Annual until I reach the 1985 season of goodwill).

There's something very familiar about all this...
What is interesting about this is that, despite what Soundwave promised a few issues ago, this is the only mention of the Annual since the last letter that came in prompting some promotion. In future years the hardbacks will be pimped to the hilt, so it's a bit odd this is being so ignored here. Maybe it not being published by Marvel directly was a factor? Though the comic has been unashamed in pushing the Ladybird stuff...

Machine Man continues to be fun, and one thing I've not yet mentioned is that his human friends are called the Midnight Wreckers. That's very close to being a great name for an Autobot Commando team. One of the characters even goes “Rack'Em Wreckers”, which is on the verge of being a mixture of the later Wreckers catchphrase and the name of their conjoined member.

At the time I'm writing this, it's just before Christmas 2012. It's almost a shame I'm out of synch with the “Real Time” of the book as it feels silly sitting here in a hat and tinsel talking about the late October issue. Next week though Blackrock gets to do the typical seasonal treat of big business executives at Christmas and have a private visit from a stripper. 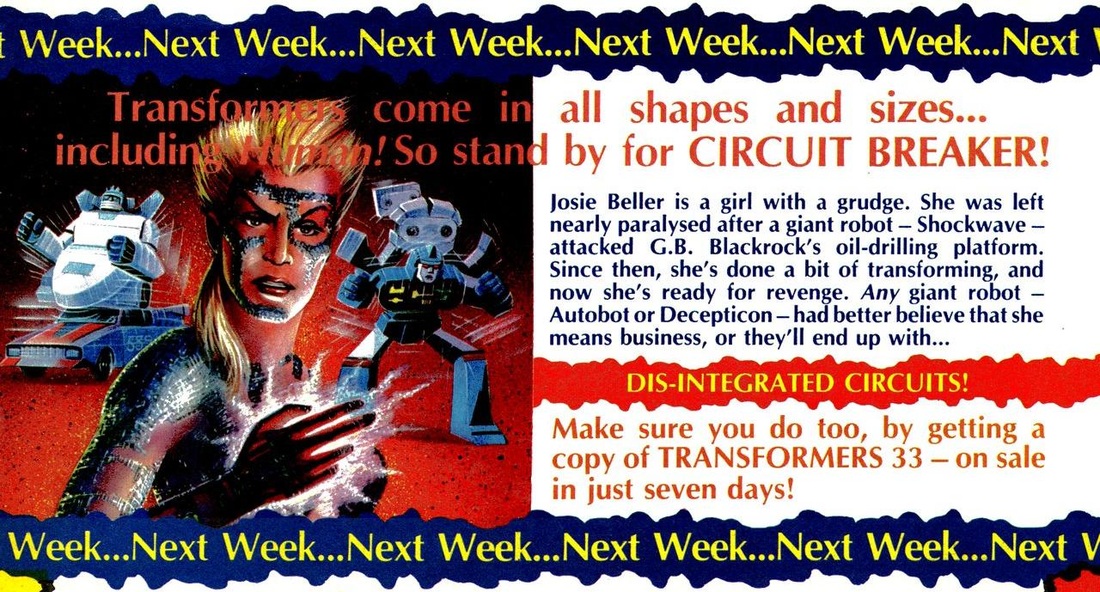