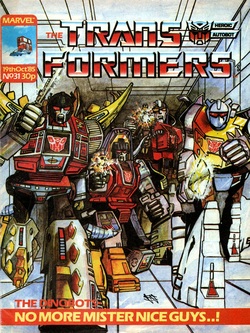 
The need for extra rash stupidity is minimal to say the least!


After a strong start with The Enemy Within! Furman's following two stories have been ones where it's been easy to see why in subsequent years he's only just stopped short of physically destroying every copy in order to stop people reading them. But here at the beginning of a two parter that will close out his work in 1985 (surprisingly he won't be back after next week till issue 45, probably his longest gap on the book), we get an immense leap in quality.

So the question to ask is, why in the space of a week does Furman suddenly feel so much more committed to book? Obviously not having to write to spec helps, but I think there are two other factors in play.

Firstly, it was likely around the time he started writing this that Ian Rimmer brought him on-board as an editorial assistant. Certainly Soundwaves has felt like it's had his hand in it for the last few weeks. That means the book is no longer just an occasional freelance gig which only guarantees a maximum of six months work a year. Instead it's a permanent source of employment, ensuring the book is as good as possible to make that job last as long as possible is suddenly a priority. No more phoned in or disinterested work, for a while at least.

Secondly, and more blatantly, after their framing device cameos in the last story we get Furman's first full on Dinobot story.

I said two weeks ago that Grimlock becomes the author's signature character, but this happens pretty much by coincidence. The Dinobots are going to vanish from the American stories without explanation, and thanks to the anti-robot gun last week we know Furman was already aware of the contents of Uncle Bob's next story.

This coupled with the fact their future US appearances will be sporadic for a good long while- indeed the next time they show up will just be to decline to join in the adventure- makes them the most important "big" characters who are left an almost entirely blank slate for Furman to use. 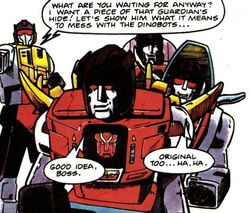 The beginning of a beautiful friendship.
This is something he'll seize on. Between now and Target: 2006 bringing in a whole raft of new ignored-by-Bob toys the only Furman written story not to focus on the Dinobots will be the mandated from on high Second Generation.

This is a wonderful bit of serendipity because the Dinobots are the perfect characters to play to Furman's strengths. Somewhere there's a parallel universe where he had to make the Omnibots the stars of the comic and things went very wrong indeed.

After the characterisation was a tad off in Decepticon Dam-Busters! here they become fully formed. That's not to say there's a huge amount of insight into their individual personalities- indeed Swoop will be the only one other than Grimlock to ever get any real focus- but there's a sense of a close net team of friends who aren't afraid to take the piss out of the boss but are still fiercely loyal to one another.

They're almost unrecognisable as the whinny emo-bots moaning at Grimlock for cursing the Autobots with Nucleon in the most recent Regeneration One issue. Though they're not the only ones to suffer from Furman just writing the IDW versions of the characters in that supposedly Marvel Universe set book.

Grimlock himself is also well written, headstrong and arrogant but still a capable leader. He's embarrassed by Ratchet pointing out Swoop is low down on the list of repairs but ultimately accepts the decision as the right one without complaining hugely. And his tactics to hunt down and destroy the rouge Guardian are sound, and would have worked if not for the big old nuke in the robot's neck.

Ratchet meanwhile takes full advantage of his last stab at being the title's lead character with some great put downs and more than a little arrogance of his own (as the Autobot's one flyer Swoop would be useful to repair early on, moving him down the list is arguably him just being a jerk to Grimlock).

There's also a lovely sequence of him casually musing on the weaknesses of the Guardian robot (which in a nice bit of continuity, includes magnetic fields) as it beats the tar out of the four standing Dinobots. 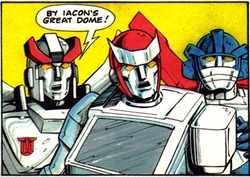 Prowl and Wheeljack: They're back!
We also get something we haven't really had since Raiders finished back in June. Other Autobots! Prowl and Wheeljack don't get much to do, basically just scanning for the roaming Guardian and discovering the bomb in his neck that creates the cliffhanger. But the fact they've been “Dead” for a while is addressed in a way the American book will quickly gloss over and Prowl makes for a surprisingly sympathetic stand in leader in light of the way he'll be written later on.

Our other guest star, Guardian, is now all yellow rather than a blue meanie and makes for a nice unstoppable force for the Dinobots to face. The bomb in the neck that Grimlock is about to set off at the end is a nice touch and, as both the evilness of Guardian and the bomb itself are his doing, shows Shockwave is someone who doesn't leave anything to chance.

My focus on the various characters may make it sound like there isn't very much plot, and to an extent that's true. This is an issue of two big action scenes bridged by some development of said characters and a couple of reminders of the other ongoing plots.

How the main plot merges into these glimpses elsewhere is actually handled rather neatly. As Ratchet wanders through the Ark he finds Prime's body, which is not only foreshadowing for next week but also prompts a cut to Blackrock's factory where Shockwave is lording it up over the detached head.

In future issues the repetition of the Shockwave/Optimus chats will really start to grate, but here it's fresh enough to be interesting (and once again, Furman cheekily gets in there before before UK readers will see Bob's near identical original take on this).

We're also introduced to brain modules for the first time. In the days before Primus it was these little dainty things that the Matrix put its computer program into in order to create each new unique Transformer. 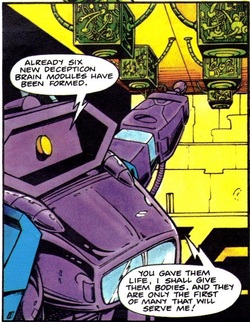 Say hello to his little friends.
The idea fell out of favour for a long time after the introduction of a more religious side to the the creation of Transformers and Beast Wars bringing in Sparks to do the same basic job in a more mystic way. But they've had something of a renaissance this last year thanks to James Roberts making great play of them in More Than Meets the Eye, making the brain module part of a trinity with the spark and the transformation cog that all have to work together to make a Transformer. The six little boxes we see here are technically the first showing for the Constructicons as well.

I also believe this covers a potential plot hole left by the American stories as I don't think they will clarifiy that Prime still had some vestiges of Matrix programming left in him that was used up on the Constructicons. And Prime thinking of where he left the rest of the Matrix leads us into...

Buster. Just a small scene showing him using the Matrix power in his mind to fix a tape deck. It's also something we'll see a variation on in Bob's work (though there it's a bike), and mainly stands out because his tape deck is playing Bruce Springsteen's Glory Days. Which is amusing when you consider that this is just before issue 14 of the American comic was published with its deeply unfunny name changed Springsteen parody (which we'll be seeing in the UK come spring).

Barry Kitson débuts on art this week, and stands out as he'll become so fettered by the editorial team they'll actually let him become the first artist to have story input in a doomed attempt to keep him from leaving the book and going to 2000 AD. Yes, years before Pat Lee he was the original Supahstar Artist.

His work here is generally solid, mainly marred by Grimlock's big head and Kitson seemingly having to draw Prowl without any reference material for what his body looks like. The Guardian fights are both nicely done though, especially with Gina Hart's striking use of a red tinged colour pallet in the first one.

Elsewhere Matt and the Cat gets a full page, and is blatantly two strips stuck together, presumably to cover last week's absence. Machine Man meanwhile sees the first appearance of Arno Stark. Though we don't know his last name yet this Iron Man of 2020 will become very popular with UK readers thanks to Transformers reprinting a few of his adventures. 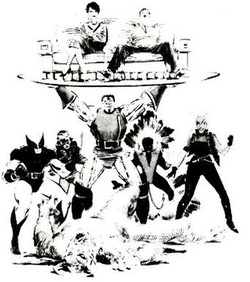 This happened.
This is already one of the longest articles I've written for this blog, and I've not even reached the good stuff yet. 1985 was the year of Live Aid, and to follow up on that Marvel UK teamed up with the Save the Children Fund to organise what is basically a charity raffle, send in the token and 50p and you'll be entered into a draw for a variety of prizes.

Amongst them are some of the things you'd expect such as signed Marvel comics and art, including that for one of the posters from a previous issue. But the star prize is insane. A John Romita Jr. drawing done for his guest appearance on TV AM of some X-Men and... presenters Anne Diamond and Henry Kelly. There's no way to describe how bonkers this is to anyone who isn't British and of a certain age, but those who are will almost certainly be imagining the various funny accented foreign X-Men on Going For Gold right now.

Sadly this forgotten masterpiece is only represented by a very small drawing, but I hope the winner will be announced in a future issue. Wouldn't it be awesome if they still had it? Framed above the bed to impress the ladies and/or men.

Next week, no breakfast TV hosts (probably), but we do get the first shocking death of a proper main character. One clue: It's the guy you couldn't buy in the UK. Black armbands at the ready in seven days.