The River Of Dreams. 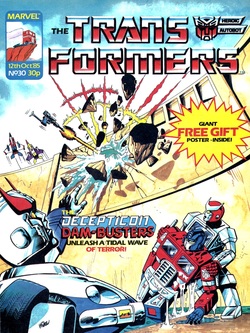 
With the exception of the last three pages, the adaptation of More Than Meets The Eye Part 2 continues with very few surprises. So I won't be going into huge details on the plot, you probably all know it backwards and there's frankly not very much of it. Safe to say the Autobots save the day.

The only real change, in order for it to fit in with the framing device of Ratchet presenting this as an explanation of why all Transformers are feared equally, is rather than thanking the Autobots the saved townsfolk randomly decide they're complete and utter bastards. For really flimsy reasons.

Poor old Mirage gets to make things worse by telling them all to sod off. Alas Mirage, on TV the hero who saves the day. In the comic a loose lipped cause of poor human-robot relations.

The thing that stands out far more than the story is how slapdash (as opposed to Slapdash) the whole thing is in art and scripting. Sherman Dam becomes Boulder Dam; the Autobots split off into two teams at one point but are still intermingled in later panels; Inferno's character model gets used when he hasn't arrived on Earth yet (and indeed, due to the American stories not introducing him with the other year two cars he won't turn up till the decade is closing) and Bumblebee has about three different head designs. One of which is more bug eyed than me. Even the way the opening narration switches from omnipresent back to first person Ratchet is clumsy.

Sneaky Inferno on the far left.
The whole thing feels like something knocked out in a hurry, with Stokes' art not being comparable to the generally solid work he did last week (and as part of the transitory design period it's odd to have Ratchet with head and Ironhide without in the same issue). Whether this is down to the decision to adapt the episode being taken late in the day resulting in a hurried product or simple apathy is hard to say. Likely both.

One thing that isn't an art mistake though, but is funny in retrospect, is that Ratchet has Megatron able to fire himself in gun mode, which makes it onto the cover as well. Late next year we'll learn the real non-story time Megatron can't actually do that.

Once we leave the flashbacks things do pick up however, mainly thanks to two minor events of a type we've not seen before in the book.

The first is part of a two page spread that serves to both reinforce Ratchet's point about human hatred of the aliens and to keep readers in mind of the current state of play for Blackrock (pissed) and Josie (crazy pissed).

What's interesting though is that G.B. is brooding next to the anti-Transformers gun that will be a big feature of the next American story. Though we've had attempts at tying into forthcoming U.S. reprints before, this is the first time something specifically created by Uncle Bob has been sneaked into a British story first. That full scale foreshadowing and weaving of plot-lines will become a big reason for the book's success.

Secondly is the cliffhanger, the return of Guardian. Anyone who comes to this knowing Furman's latter day disregard for Raiders will likely find this surprising. But as we'll see next week a big mute McGuffin suits the story well, and is an entirely sensible bit of recycling.

This last second cameo of him looming over a defeated Swoop outside the Ark suddenly and unexpectedly makes this the first full on sequel to a previous story (rather than just consecutive stories leading into one another). And again, this adds to the overall sense of continuity the book will excel at.

The four heads of Bumblebee.
Soundwaves has a shrunken logo, sans-Soundwave himself, this week to make room for a large drawing of Jazz by Rory Kelleher from Limerik. Which the first bit of fan art we've had since the format change. It's not especially good (sorry Rory), but the smaller title makes the page look a bit neater.

Machine Man reaches what I'm going to guess was the end of the first original issue, with the reveal that I was right and the mystery shadow woman was his robot girlfriend. I'd be smug if not for the fact I have read this before even if I couldn't remember the exact details.

In good news, unless my eyes refused to see it, there's no Matt and the Cat this week. Huzzah! 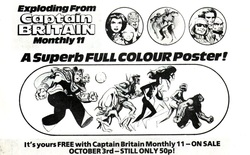 Ad for the Captain Britain comic.
One final, fun note on the cover. In the same way Inferno pops up on the inside there's an almost cameo from a year two character not yet introduced. In the top left hand corner there's two Seekers, one Starscream and the other... In Blitzwing's colours. I've never seen this pointed out before even though it's an obvious candidate for HasTak to add to the ranks of Acid Storm and Sunstorm as random background jets turned into an excuse to wring more repaints out of Starscream toys. Skyblitz? Blitzcracker? Thunderwing? Ah, maybe not that last one.

But if Hirofumi Ichikawa is reading this and wants to write a 50000 word back-story for the Universe Starscream repaint of this toy explaining where he comes from and how this story ties into Kiss Players, be my guest.

In summation, this is a fairly poor and cynical story. To the point that, whilst people have jumped through hoops to try and fit the earlier UK stories into the original mini-series, most people are happy just to write this off as a load of old toot Ratchet made up for shits and giggles. Which is as good an explanation as any.

Next week though, the British stories hit their stride with the first to properly tie fully into the overarching story-lines without the need for flashbacks or vague hand-waving. It's also the point where Furman regains his Enemy Within! mojo. Things are about to get very, very good.

And as one final bit of useless information, this comic was first published the same day Nicole "The Ginger One Off Girls Aloud" Roberts popped out of her Mum. Who says this blog isn't educational? 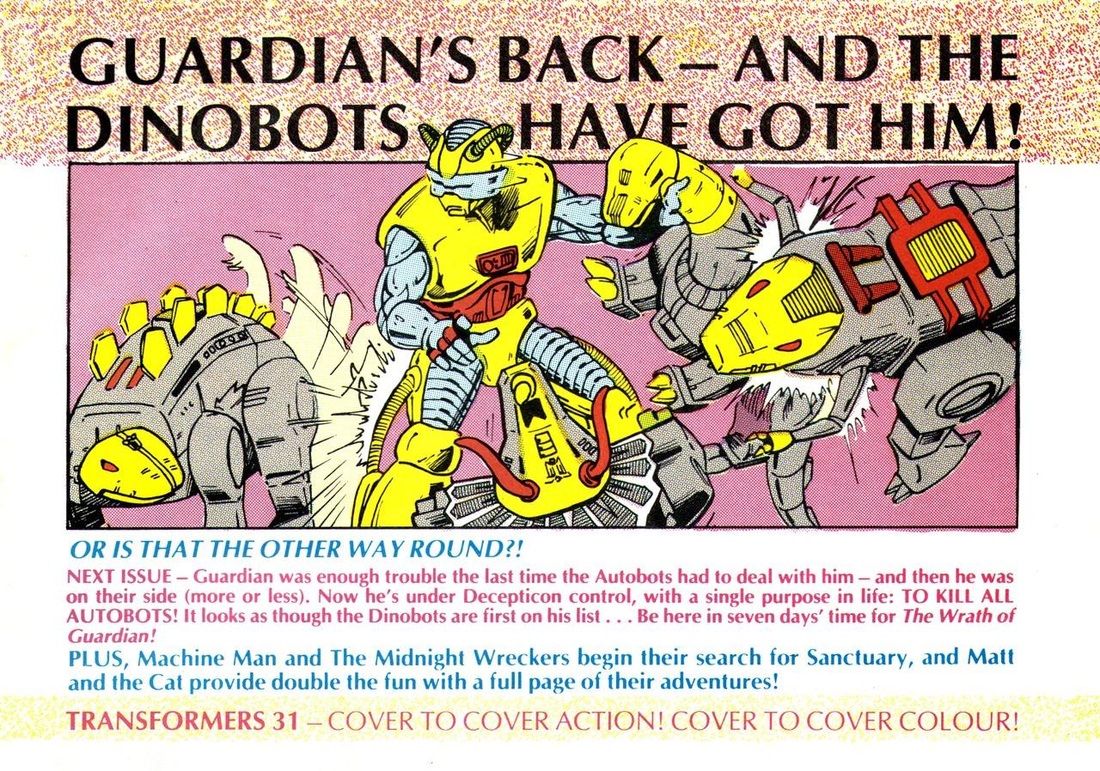