This is the Story, All About How... 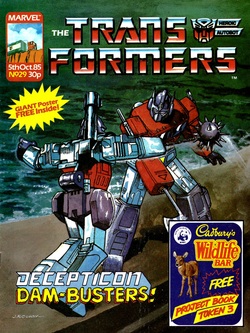 
Theoretically this week sees a momentous occasion. The very first UK story to follow directly on from the preceding American, neatly fitting into continuity and formally beginning the wider tapestry that will create a full, rich wider Universe for the comic.

Except that's not what we get at all. The sequence following on from last issue is barely four pages, forming a framing device for something far more in the style of the first three UK tales, something vaguely before the events of issue 8 where you shouldn't think to hard about the placement.

There's one added twist though. After the Dinobots scare the living crap out of a human on the way back to the Ark, Ratchet decides to tell them a story explaining why the indigenous carbon based life forms have no time for Transformers. And the tale he tells is a very familiar one, especially to readers at the time who would have seen something similar sandwiched between the hijinks of Roland Rat a few weeks before.

Yes, famously, this two part story adapts the middle episode of the three part opening of the cartoon, or at least the dam stuff (sadly no ruby mines of Burma here). The fight between Optimus and Megatron that forms the cliffhanger is extremely well remembered with their in built weapons being iconic enough to have resurfaced all over the place; up to and including the Bay films; despite only being seen in the cartoon this one time.

A clip show with all new clips.
However, despite the famous fight, adapting this episode is on the surface a strange decision. For many years the assumption amongst fans was that this story was a somewhat desperate bit of filler that used the flashbacks to get around the fact that, with most of the Autobots dead, it was hard to come up with an adventure that could fit in this gap easily (despite the fact the next story manages it easily).

The true thinking behind adapting the series has, as has so often been the case, come out in James Roberts' work on the UK Classics books for IDW. Still fairly new editor Ian Rimmer had a plan to tie into the launch of the TV show on TV AM, and deliberately commissioned Simon Furman to rework More Than Meets the Eye so the potential audience of kids would pick up the comic and see something they recognised from what they'd seen on screen, effectively this is another mini-relaunch issue.

There is a certain logic to that. Even with the comic more more constant, those erratic TV broadcasts would have been seen by many more people than would be reading the title even at its peak. For a comparison, the present day version of TV AM, Daybreak, was at its worst still being seen by seven times the number of people who ever brought a Transformers comic.

In execution though, it's something of a failure. Most obviously because the place to do this would have been two weeks ago during the major relaunch. As it would have been fairly easy to contrive a way for Ratchet to remember a past adventure just about anywhere you have to wonder if, in getting permission to use the TV script, they had to avoid putting it too close to its UK screening.

It also fails because one weakness of Furman's is he's never very enthusiastic when being asked to write to order. For the most part he'll be very lucky in that Uncle Bob and the US series will have to bear the brunt of contractual obligations, allowing the UK series to be more footloose and fancy free (and by the time he came to write the American stories as well Hasbro had pretty much ceased to care).

However, the few times either editorial or Hasbro UK throw down a mandate, being it introducing combiners early or giving the Headmasters a showcase, Furman's work will usually take on a decidedly meh quality, as if his heart isn't really in it. 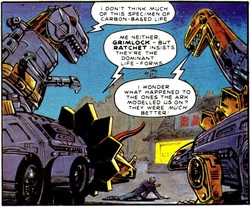 The most verbose the Dinobots will ever be.
The framing device itself has some nice, if light, comedy and of course features Furman's first time writing for his "signature" character of Grimlock. The voice isn't quite there yet though, with Grim having a much more formal and ridged speech pattern than we'll see again. Though it'll be a (thankfully) long time till he's "Me Grimlock..." every sentence, even as early as the next story Furman will start to write his as a more down and dirty character than the polite verbose fellow seen here.

Whilst it's fair to say that being such a familiar story doesn't help it when read as a mad fanboy now, even on its own terms the flashback material is fairly poor. There's little or no effort to pump up the fairly light storyline, and you're mainly left with the impression that the voice actors on the cartoon did a very good job of making the best of some very poor lines. The one good- and new- bit is Prime's resignation that everything they do basically boils down to stopping Megatron.

There's also one nice bit of unintentional foreshadowing, as Megatron's claim that the hand weapon fight is "Old fashioned" Cybertron style combat can be seen in retrospect as a nod at the gladiator back-story the second Annual (and pretty much every continuity since) will give him.

John Stokes is on art duties and mostly does a good job, despite being in the middle of a strange transitory period between the toy based designs and the final character models, something that will be more evident next week. However, and hugely unfair on him, Stokes' work suffers from something that turned up in- yet again- James Roberts' research. Drawing his own take on a couple of the pages of the Megatron/Optimus fight is what got Geoff Senior a gig on the comic. That trial art, shown in the second UK Classics book, is stunning and head and shoulders above even the best material we've seen to date.

Ironically for something that's trying to cash in on the cartoon, the letters page features the first even instance of Soundwave firmly saying the TV series is, basically, bollocks and the comic tells the real and true story of the Transformers war.

There's also another letter from someone keen to collect the American comic as well as the British. Last time this came up I mentioned my surprise as later on the UK team will basically pretend their transatlantic cousin doesn't exist, but things go one better here as it's firmly confirmed by Soundwave the British comic reprints the American series, something not completely clear in his response to the last letter. Though he's also keen to point out Marvel UK use better paper so all true fans should buy British.

Robo-Capers...unfunny.
He Lives Again! is in an unprecedented position, the very first time the back up strip is of a higher quality that the main story. Thankfully this won't happen too often in the future, but the big fight between Machine Man and a super robot out to get the crooks who stole him is very nicely done, and sees some of the deadpan snark of the character that I'd grown to enjoy in the original run seep back in.

Matt and the Cat... Continues. It's going to be a struggle to come up with anything new to say about that for another forty odd issues. It has to be said Robo-Capers, never brilliant to start with, has been especially poor since the move to colour as well.

The most exciting thing about the extras though is this months calender, a stunning painting of Soundwave that is the first ever full on homage to the “Are all dead” cover. It's so good it'll be reused as a cover in its own right one day in the dim and distant future, where it will finally be credited to Richard Fisher.

A pretty neat thing starts this week in the corner box, as a sequence of Optimus Prime transforming starts here and runs across the next few covers.

One final thing to note is that with the last poster and token for a WWF book the cycle of free gifts began with the relaunch comes to an end, effectively ending the transitory period between old and new formats. From next week there's not extra tat to lure readers in, the title has to stand on its own merits. Unfortunately, it's not the best time for the book to do that as this rather tepid story concludes. Join me in seven days for the adventures of Crazy Bug Eyed Bumblebee. 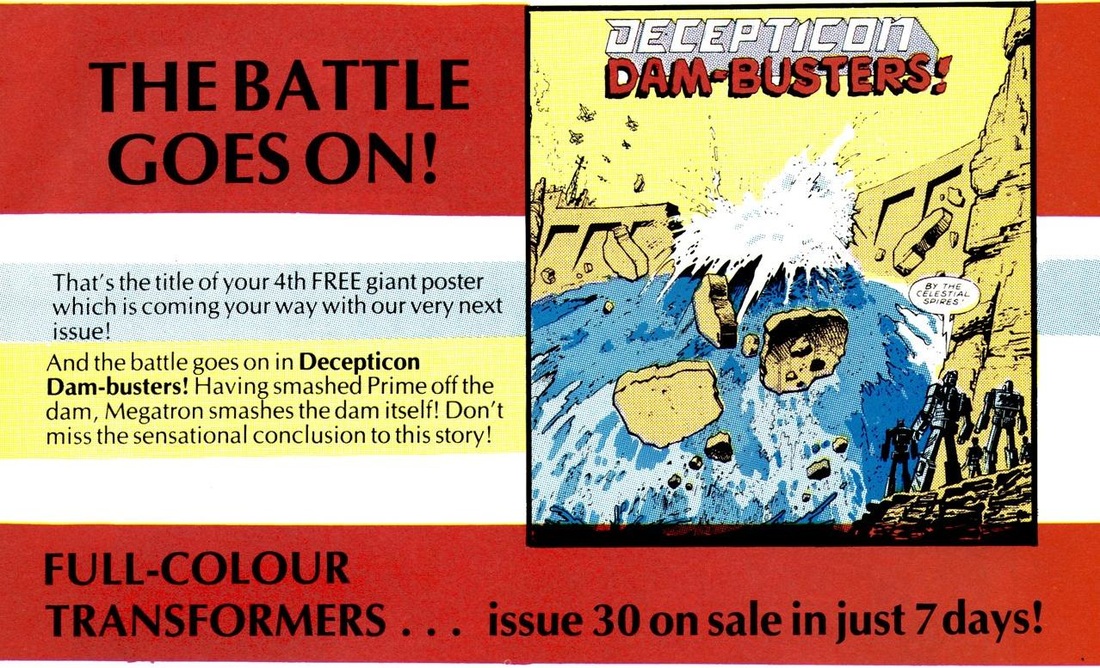