All Just A Little Bit of History Repeating. 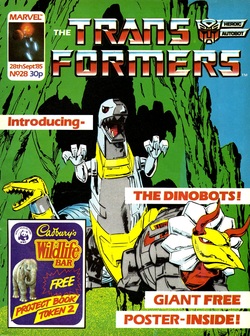 
I should have crushed that medical moron while I had the chance! At least that would have been satisfying!


Introducing the Dinobots! Screams the front cover, but it feels like we've been building up to the first full length present day appearance of all five members of the team for months. Mainly because we have. Yet, as I insinuated last week, their showing feels more like a contractual obligation than anything. After all the preamble they're only in a few pages and don't actually contribute very much to the resolution of both the story and this part of the arc (which, in the American run, ends the halfway point of the storyline that takes up the first 8 regular monthly issues and represents a little mini-climax).

The real big thing this week is the end of Ratchet's story arc over the conflict between his pacifistic nature and the current need to be a warrior. The next few weeks will reintroduce the rest of the Autobots meaning he doesn't need to be a one man army any-more and will start to fade into the background as other things come to the fore.

It's also the end of Megatron's little storyline about being usurped by Shockwave, after being written out here we'll only be seeing him in flashback until the new year. So all in all it's the perfect place for the UK team to insert some of their own material, a nice little natural break the next issue will take full advantage of.

The issue opens with some housekeeping and set up for future issues. We get a surprisingly smug Blackrock being interviewed outside his factory about how the army are going to blast the crap out of any giant robots that try to get in there. Obviously the man hasn't learnt his lesson about tempting fate as Shockwave shows up almost before he's finished speaking and delivers some wonderfully sardonic (though of course, perfectly logical) verbal smack-downs as shells just bounce off him.

It's a fun moment, but is mainly there as a lead in to two simple exposition scenes. The first confirms Optimus is now in the plant and the Matrix will now be used to give new troops life, the second reaffirms how pissed off Josie Beller is at the whole thing and that's she's well on the way to being a sticky back plastic fetishist.

Awww.
After that though, it's to the meat of the issue, with a still comically childish Megatron sitting bored in the Ark bemoaning the fact he didn't just kill Ratchet for fun when he had the chance. He's then amazed when Ratchet calls him on the space phone to show him "Proof" of Shockwave being defeated by the Dinobots.

Luckily for Ratchet Megatron is enough of a tit as to actually come to there meeting rather than, say, calling up the other Decepticons at Blackrock's to smugly try and reclaim leadership now he thinks Shockwave is "dead".

It's a bit of a shame that after the nice subversion of his reaction to fire two issues ago here Ratchet's comic confusion by snow and skiing is played completely straight. And lo, more comedy humans as two skiers come across the Ratchet/Megatron face off and declare "Sue, I think we took the wrong trail!".

What's interesting is that, even though Ratchet's breaking of his oath is perfectly sensible and exactly what anybody who isn't an idiot would do, the script is careful to have Megatron formally betray him before the medic plays his surprise hand. It's as if Bob was worried about Ratchet being seen as a cheat, bless, and does make you wonder what he'd have done if Megatron had actually kept his word about the Ark. "Ah, this is awkward, but...".

Luckily for the amount of pre-planning Ratchet has put into it, Megatron does betray him meaning the hidden Dinobots can be unleashed. And get beaten up with indecent haste, meaning they've lost their second fight in a row in two issues. It's hilarious when compared to the "Me Grimlock BAD ASS" style stuff in years to come.

This might hurt Grimlock's later ego, but it ensures this part of the arc can end exactly how it should dramatically, focusing on Megatron and Ratchet. Meg's callous mockery of Ratchet's failings as a warrior neatly sums up his role in the last few issues, petulant, needlessly smug and just that little bit pathetic.

Ratchet on the other hand decides the time has come where he has to be a warrior and fight Megatron one on one. His attempt- running into Megatron's chest- is rather rubbish, but the effort at least impresses the Decepticon leader before the edge of the mountain gives out from under him sending him to his almost certain doom (which is a fair description of what we'll be getting in issue 51) miles below. 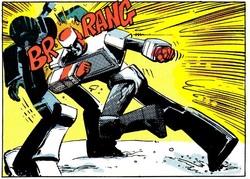 Lucky they didn't stick together.
Ratchet then makes what he'll probably come to regard as the biggest mistake of his life as he soaks up some adoration from the Dinobots and decides to go sort out the Ark rather than making sure Megatron is dead. Whoops.

For our American cousins this actually wasn't the end and they got an extra coda where Josie finishes her Circuit Breaker preparations that the UK team left out as the next few weeks will see a bit of a tangent (originally IDW had to leave it out of their reprints as well due to her being owned by Marvel). Instead we get an extra big "NEXT" caption and a Snarl Inter Face. A distinct improvement.

The important thing about the rest of the issue is the fully fledged arrival of the letters page as we remember it. "Soundwave" is now formally answering the letters in his irascible style, and both the slightly odd approach taken by the earlier Soundwaves' and its absence from the last two issues is neatly explained. Soundwave has just spent a fortnight disposing of the humans who'd previously tried to "Help" him with answers. We also get the very first examples of his "Puttup" catchphrase, said after any word (such as Autobot) he doesn't like, this running gag will eventually make it into, and be explained by, the comic itself.

The bit that perhaps best shows why we all love the letters page is when someone asks about the Constructicons. A lesser kids comic (and the earlier Openers page) would have used this cast iron opportunity to whore the forthcoming toys. Instead Soundwave makes a joke and encourages kids to keep reading to find out. The only bit that doesn't feel right is some fairly positive promotion on the cartoon, which had just finished its initial UK run on TVAM. 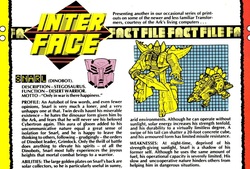 What the UK got instead of the cliffhanger.
Oh, and, surprisingly late considering it would likely have been out since August, the Annual gets its first mention. Apparently the exciting reason we should all go buy it is because Warpath is going to be in it. Hmm.

The second part of He Lives Again! sees an unexpected link to the previous Machine Man stories as it turns out Madam Menace is still about and the head of Baintronics. Amazingly as a 70 year old with way too much plastic surgery wearing what an '80's artist thought early 21st century fashions might look like she (under her real name of Sunset Bain) still looks less silly than she did first time round.

It's also nice to have Machine Man back on his feet and confused by the present day. I don't really have many strong memories of the plot from the second time this was reprinted later in the book's life, so it's going to be interesting to see where it goes. Though I'm betting the mystery robot in Bain's flat will turn out to be the girlfriend MM is missing so much.

If last week established the new look, issue 28 beds it down. With Soundwaves settled the comic firmly embraces its new identity here, helped by the lead strip continuing to be so strong.

Next week thing do slide a tad as we get into a somewhat cynical TV tie in, but that blip aside something of a golden era is under-way. We've just got to survive the Sunbow Dam-Busters first.... 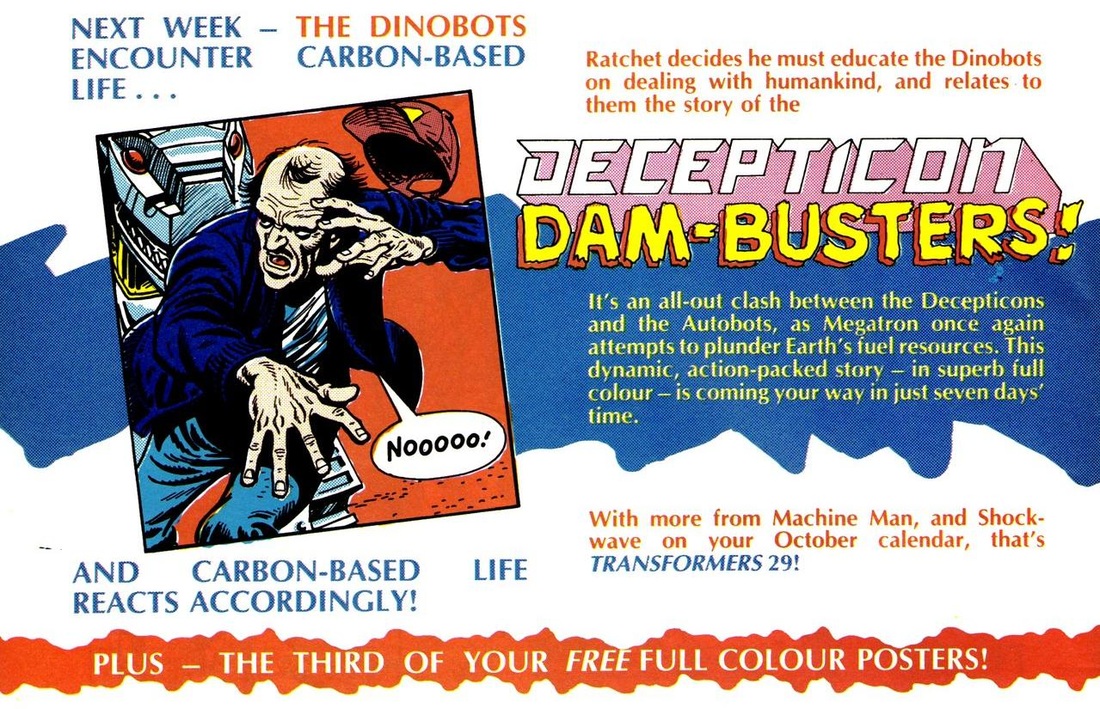